The grading of chronic venous disease has been facilitated and standardized by the introduction of the CEAP classification system, in 1995.2 Among epidemiological surveys that have been performed since then, at least six have used the CEAP classification,6-11 making comparison between studies much easier. Unfortunately, little is still known about the prevalence of symptoms in chronic venous disease, despite the introduction of the notion of symptoms in the CEAP classification. The percentage of symptomatic patients with chronic venous disease varied between 25% and 84%, depending on the population studied, the severity of the disease, and the mean age of patients (Table I).
The French team of Carpentier found that symptoms increased with the CEAP classes. In this study, patients with symptoms went from 25% in C0 to 84.6% in C3, 82.2% in C4, and 77.5% in C5-6.11 In the same way, Labropoulos5 found a direct relationship between the amount of inflammatory mediators and the severity of the disease. 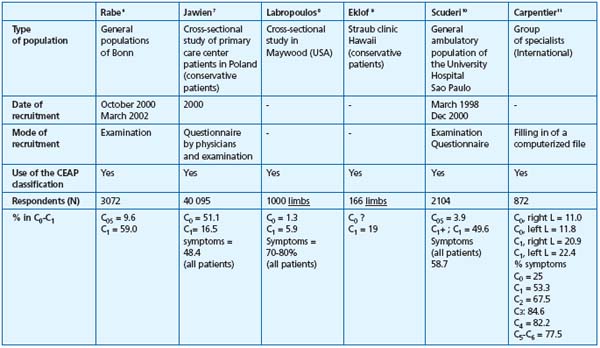 * Leg problems included: “pain in legs” and “presence of varicosities of the legs”.
Table I. Summary of epidemiological survey using the CEAP classification (adapted from refs 6-11).

Two major mechanisms may be responsible for pain in the absence of trophic changes:
– first, venous wall tension which results from dilatation of the vein in a normal subject in a standing position and valvular incompetence during dynamic movement in a standing position in a subject with valvular insufficiency;
– second, hypoxia of the tunica media of the venous wall due to alteration of the vasa vasorum. Pain seems more related to hypoxia; indeed, in the early stages of chronic venous disease, superficial venous distensibility is slight, while pain is more severe than in the advanced stages of chronic venous disease where venous pressure is elevated and therefore high venous wall pressure exists.12 However, the venous remodeling phase that precedes the development of varicose veins, which is accompanied by the process of venous distension, hemorheological disturbances, and conditions of hypoxia, can be painful.

Pain and heaviness in the legs

Two specific targets for phlebotropic drugs exist which aim to decrease the sensation of heaviness in the legs and pain, and ankle edema at the end of the day. The first target of such therapy is increased venous wall pressure: indeed, it is known that distensibility is increased by 10% to 50% in patients13 with chronic venous disease according to different studies, and that this is due to a decrease in venous tone. The second target is hypoxia of the tunica media related to disease of the vasa vasorum.12

These symptoms most often occur during the latter half of the night, but also can occur during a prolonged seated position. They can also be related to hypoxia of the tunica media, but more specifically may be associated with hemorheological disorders.12 In fact, red blood cell hyperviscosity and hyperaggregation are constant findings in venous disease.14,15 It appears likely that hemorheological disorders worsen the circulation in the vasa vasorum. Hypoxia in the tunica media, in turn, induces deterioration of the venous wall. Indeed, hypoxia has a potent effect in inducing metabolic disorders: triggering of enzyme activities, such as those of matrix metolloproteinases (MMP), and dedifferentiation and migration of smooth muscle cells which secrete growth factors. Fibrosis of the venous wall governs the development of the varicose vein. The diseased venous wall generates several metabolic disorders, including hypofibrinolysis due to elevated levels of plasminogen-activating inhibitor (PAI-1). The links between pathophysiology, symptoms, and clinical signs of chronic venous disease are summarized in Table II.

The process of edema appears to be due to increased capillary permeability related to permanent venous hypertension,12 whose mechanisms vary: reflux, obstruction. Two stages should be distinguished in the progression of capillary disorders, as venous disease becomes progressively worse: first, the existence of a functional disorder followed by development of a lesional disorder, which characterizes chronic venous insufficiency.

It must be stated that since it is not possible to confirm whether such symptoms are related to venous disease, it appears important to try to characterize these symptoms based on the following secondary criteria:

• Variability with position or physical activity

Symptoms generally occur after prolonged standing, at the end of the day, and are diminished in the morning, by supine position, or with the legs elevated.

Symptoms occur or are exacerbated by warmth, the summertime season, hot baths, hot waxing to remove body hair, floor-based heating systems, and regress or are diminished in winter and with cold temperatures.

Symptoms fluctuate with the menstrual cycle; they can occur with hormonal therapy (estrogens or estrogenprogestin) and regress with discontinuation of such treatment.
The existence of at least two secondary criteria is necessary to confirm that symptoms are related to chronic venous disease, but the absence of such criteria does not rule out the possible venous-related origin of the symptoms.16 Pain and heaviness in legs are the symptoms that are the most often encountered in patients with chronic venous disease. Symptoms, and in particular, pain, can be evaluated with self-evaluation rating scales. Three types of scales have been validated17:
The visual analog scale most often used in the conventional format which consists of a 100-mm-long horizontal line. The patient indicates the level of his or her pain by drawing a mark on the line (paper format) or by moving a cursor along this line (mechanical ruler). It has a white background and has no words other than those at each end.
Numerical scales are also used for evaluation of pain intensity. Several types of numerical scales exist, generally with numbering of 0 to 10 or 10 to 100. The patient has to assign a score to his or her pain intensity.
Simple verbal scales also allow evaluation of pain intensity. They are based on the choice of an adjective to define pain intensity. A numerical value corresponds to each adjective. Measurement is limited to 5 or 6 levels. Generally, they are reserved for persons who have difficulty (limited capacity for abstraction) in using the previous two types of rating scales.
These scales are validated but are not specifically adapted to the chronic venous disease.
Some scales have been used to evaluate patient-reported symptoms. One has been recently set up for use across the range of CVD-related symptoms,18 one for varicose veins,3 and one for patient-reported measure of quality of life and symptoms.19 The questions of the VEINES/QoL-Sym specifically devoted to symptoms are presented in Table III. Presentation of a scale to the patient has to be done in a relatively standardized manner (for example, always at the same time of the consultation).
All these scales evaluate pain intensity but do not provide information on the nature of the pain complaint. They make it possible to compare intraindividual variations between groups of patients in evaluation studies or longitudinal observational surveys.

1. During the past 4 weeks, how often have you had any of the following leg problems?

Table III.
Questions from
VEINES/QoL-Sym for the
evaluation of chronic venous
disease-related symptoms
(adapted from ref 19).

Evaluation of symptoms associated with CVD and the expected benefit of therapy with Daflon 500 mg (micronized purified flavonoid fraction, MPFF) is not easy because many intercurrent factors exist. However, randomized, controlled studies with a washout period have been conducted using measurable criteria for evaluation of symptoms in the legs.
Randomized, double-blind, 2 -month studies have evaluated the effectiveness of Daflon 500 mg twice daily in the treatment of symptoms and signs of the disease compared with placebo.20,21 The long-term efficacy of 2 tablets of Daflon 500 mg daily has been studied in two nonblinded, multicenter trials of 6- (Reflux Assessment and Quality of Life Improvement with Micronized Flavonoids [RELIEF] study)22 or 12 -months’ duration.23
The efficacy of Daflon 500 mg was evaluated by the change in clinical symptoms in the legs, ankle and calf circumferences and/or plethysmographic parameters.
The number and type of clinical symptoms (eg, functional discomfort, sensation of leg heaviness, leg pain, nocturnal cramps, sensation of swelling, paresthesia, redness and/or cyanosis, sensation of heat and/or burning was different in each study. Patient response was determined by changes in symptom score on a 4-20-22 or 5-point scale23 where increasing numbers indicated increasing symptom severity. Pain22 was measured on 10-point visual analog scale in some of the trials. A variety of noninvasive techniques, which correlate with changes in venous pressure, have been developed for objectively quantifying the severity of the disease. These include strain-gauge plethysmography (eg, venous distensibility at various venous occlusion pressures and duration of venous outflow after removal of venous occlusion)20 and duplex ultrasonography (eg, venous reflux time).22
In the RELIEF study, the Chronic Venous Insufficiency Questionnaire (CIVIQ), the first health-related quality-of life scale specific for CVD, to evaluate the effects of MPFF on health-related quality of life was used.22 CIVIQ is a 20-question self-administered questionnaire with a range of scores from 0-100 where 100 indicates a very good health-related quality of life.

Two tablets of Daflon 500 mg daily maintained efficacy throughout the treatment in the long-term in patients with symptoms of chronic venous disease in two nonblinded, multi-center trials of 622 and 12 months’23 duration, respectively. In the RELIEF study (n=4527 intention- to-treat population), patients receiving 2 tablets of MPFF daily showed progressive improvement in the symptoms of chronic venous disease, (Figure 1) which were paralleled by improvement from more severe (C3 or C4) to less severe (C0–C2) CEAP clinical classes of chronic venous disease.22 After 6 months, patients in the per-protocol population showed significant improvement from baseline in the study outcome measures (ankle circumference, pain, leg heaviness, cramps, sensation of swelling; P<0.012). In the 1-year trial of 2 tablets of Daflon 500 mg daily in 170 patients,23 a significant reduction from baseline values in physician-assessed clinical symptoms (functional discomfort, cramps, and evening edema), ankle and calf circumference, and patient overall assessment of symptom severity was demonstrated at each 2-month evaluation (P<0.001). The rapid reductions observed during the first 2 months of treatment represented approximately 50% of the total improvement ultimately observed after 1 year of treatment. Continuing improvement in all parameters, albeit less rapid, was reported at each time point from month 2 to month.12 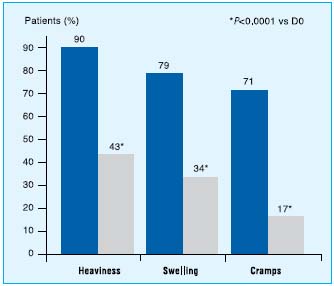 In recent guidelines24,25 or extensive reviews26 on the treatment of chronic venous disease, the use of phlebotropic drugs is indicated to treat edema and the chronic venous disease-related symptoms (eg, edema, fatigue, nocturnal cramps, and heaviness) in any stage of the disease. In the more advanced stages of the disease, only Daflon 500 mg has demonstrated a significant acceleration of ulcer healing. Thus Daflon 500 mg should be used in advanced stages of the disease in conjunction with sclerotherapy, surgery and/or compression therapy, or as an alternative treatment when surgery is not indicated or is unfeasible, or when patients are unwilling or unable to use compression therapy (elastic stockings or compression bandages). These recommendations were supported by clinical trials of Daflon 500 mg, which has been extensively evaluated for use in patients with chronic venous disease.