Chronic pelvic pain associated with pelvic congestion syndrome and the benefit of Daflon 500 mg: a review*

Chronic pelvic pain is common in women of childbearing age and causes disability and distress, which result in significant costs to health services. A specific diagnosis for the condition is often difficult because the pain may be of abdominal, neurogenic, or psychogenic origin, or may be caused by other pelvic conditions such as endometriosis, pelvic inflammatory disease, and ovarian cysts. Due to the possible interlinked factors, no diagnosis is made in 60% of patients.1

The pathogenesis of chronic pelvic pain is poorly understood. The vascular hypothesis offers the most likely explanation for chronic pelvic pain, which is thought to arise from overdistension of the pelvic venous system in which blood flow is markedly reduced. In pelvic congestion syndrome (PCS), pelvic varices are seen in a significant proportion of patients and may be the underlying etiology of chronic pelvic pain.1

Undetected severe diseases such as endometriosis, adhesions, interstitial cystitis, active chronic pelvic inflammatory disease, and irritable bowel syndrome may cause pain and should be excluded to confirm a diagnosis of PCS.

Investigation using laparoscopy is controversial since it often reveals no obvious cause of pain. Complementary investigation uses selective ovarian venography, which is commonly recommended by gynecologists. Newer, noninvasive methods such as magnetic resonance imaging and duplex ultrasound are gaining favor for the diagnosis of pelvic varices.

Using the example of micronized purified flavonoid fraction (MPFF, Daflon 500 mg, Servier, France), this review will provide an update on the diagnosis and management of PCS and on the benefits of MPFF 500 mg in the treatment of pelvic pain.

Chronic pelvic pain as part of a PCS is a common and significant disorder which affects 3.8% of women of childbearing age. The pathogenesis of chronic pelvic pain is poorly understood. Disorders of the reproductive tract, gastrointestinal system, urogenital apparatus, musculoskeletal system, and neurological system may be associated with chronic pelvic pain. Besides PCS, four other conditions account for most chronic pelvic pain: endometriosis, adhesions, interstitial cystitis, and irritable bowel syndrome. Since more than one source of pain can be found in the same patient, the diagnosis of PCS is a challenge for practitioners and is a diagnosis by exclusion of the other concomitant diseases.

At an individual level, chronic pelvic pain leads to years of disability and suffering, with loss of employment, marital discord and divorce, and numerous untoward and unsuccessful medical misadventures.2-8 In many cases, despite extensive investigations, no obvious etiology is found, and therefore the workup begins with a good history and a thorough physical examination to make a diagnosis, so that a more tailored approach to investigations and treatment can then be provided. Combining this with a multidisciplinary approach has proven beneficial.5-7

The well-described clinical presentation is that of pain and fullness exacerbated by prolonged standing, coitus, and in the premenstrual period in multiparous women. PCS was early described as “a congestive vascular disturbance in the pelvis”.9 A more recent definition describes PCS as “chronic symptoms, which may include pelvic pain, perineal heaviness, urgency of micturition and post-coital pain, caused by ovarian and/or pelvic vein reflux and/or obstruction, and which may be associated with vulvar, perineal, and/or lower extremity varices.”10 Pain in PCS usually begins with ovulation and lasts until the end of menses.

PCS is the reflection of chronic venous disorders affecting the pelvic veins, whereby varicose dilations depending on the gonadal (uterus-ovaries) and hypogastric plexuses develop, producing pelvic varices or stasis or pelvic heaviness or a combination thereof. Clinically, it can be accompanied by vulvar varices (mainly during pregnancy), hemorrhoids, and varices in the small fossa between the pelvis and legs, on the inner thigh. The venous system is a network of preferential and secondary axes, which are all interconnected by a secondary system that can be used as a collateral system when these pressures are altered. Sometimes, this collateral system inverts the flow from the vena cava to the pelvis and lower limbs, forming escape points, and connects these systems and transmits this pressure change, so that the symptoms can be pelvic or in the legs.11

Pregnancy has been considered one of the major risk factors for PCS because of the relaxant effect progesterone has on the pelvic veins and because of the gravid uterus, which may increase their obstruction.9 In addition, there has long been an assumption that social and psychological factors play a part in PCS genesis. In the 1950s, Duncan and Taylor4 measured vaginal blood flow at times when patients expressed anxiety, depression, or resentment, and found a decreased flow with relaxation during psychiatric interviews. They pointed to the intricacy of psychological factors in PCS, particularly in nulliparous women. Fry et al12 reported significant associations between some social arrangements, paternal parenting, and patterns of hostility in patients with PCS. They considered that difficult father-daughter relationships and hostility patterns may have influenced the development of the condition in these patients.

The patient with chronic pelvic pain may be a candidate for laparoscopy if conservative forms of therapy (namely anti-inflammatory drugs, antibiotics, psychotherapy, and endocrine suppression) have been unsuccessful. However, objectively the decision for laparoscopy should be based on the patient’s history, physical examination, and findings of noninvasive, including psychological, tests.

Diagnostic laparoscopy is often carried out after referral to a gynecologist as an initial investigation to uncover pathological causes, such as endometriosis, adhesions, interstitial cystitis, and irritable bowel syndrome. Investigation by laparoscopy may show prominent enlarged broad ligament veins,8,13,15-17 and may reveal pelvic varices. When laparoscopy findings are negative, which is not uncommon given the positional nature of the pelvic varices, further investigation using selective ovarian venography and duplex ultrasound is needed. Transuterine venography has become a standard method for the diagnosis of PCS,5 although newer, noninvasive methods such as magnetic resonance imaging and duplex ultrasound are gaining favor for the diagnosis of pelvic varices.1

A multidisciplinary approach addressing environmental factors with physiotherapy, psychotherapy, and dietary modifications and incorporating medical management combining pain relief, hormonal therapy, and surgery is to be implemented in this challenging condition. Treatment options of presumptive PCS range from hormonal suppression, if the pain has a cyclical component, and cognitive behavioral pain management to hysterectomy. Combining this with a multidisciplinary approach has proven beneficial.5-7

Pelvic varices are eminently treatable, either using ovarian suppression (ligation of the gonadal and hypogastric veins, hysterectomy) or by the ligation or embolization of the pelvic veins. However, in cases of stasis or heaviness, surgical intervention is not necessary and therefore pharmacological therapy can be essential in order to treat the problem and relieve chronic pelvic pain. Thanks to their chemical composition, venoactive drugs such as MPFF 500 mg have been attributed a protective and tonic effect on the venous and capillary walls and a vein-specific anti-inflammatory effect18 which account for their ability to effectively decrease chronic pelvic pain associated with PCS.

Our experience with a venoactive drug

This is a review of the trials we have performed with MPFF (Daflon 500 mg, Servier, France), a drug widely used in the treatment of symptoms and edema related to chronic venous disease.

The choice of MPFF 500 mg was guided by its evidence base and its interesting characteristics. MPFF 500 mg is an oral phlebotropic and vascular protective agent consisting of an optimal ratio of 90% of diosmin (450 mg) and 10% of other active combined flavonoids expressed as hesperidin, isorhoifolin, linarin, and diosmetin (50 mg). It increases venous tone, improves lymphatic drainage, and reduces capillary hyperpermeability. MPFF 500 mg reduced reflux through pressurized veins in an animal model of acute venous hypertension, and has therefore been used clinically to treat chronic venous disease. By reducing the expression of some endothelial adhesion molecules, MPFF 500 mg inhibits the activation, migration, and adhesion of leukocytes, which leads to a reduction in the release of inflammatory mediators and thereby a reduction in capillary hyperpermeability, thus decreasing pain, heaviness, and edema.19 Several indices of inflammation in the microcirculation are reduced by MPFF 500 mg. For these reasons, MPFF 500 mg seemed to be the most appropriate drug for our trials.

Aim of our trials: to improve the clinical situation of patients with PCS, particularly chronic pelvic pain.

Patients with chronic pelvic pain were included after examination with transvaginal ultrasonography to exclude any disease responsible for pain, and then examined by laparoscopy during the follicular phase according to El-Minawi and El-Minawi.20 The diagnosis of PCS in the selected patients was based on the strict criteria of prominent broad ligament and ovarian veins, without any other disease. In the case of negative laparoscopy,20-23 a more sensitive approach such as venography or magnetic resonance imaging was performed.

In a pilot study,22 we investigated the role of enlarged veins in the pathophysiology of PCS and evaluated the effects of MPFF 500 mg on pelvic pain in ten women aged 28 to 35 years. They all had prominent broad ligament and ovarian veins. The women were randomized to two groups in a double-blind trial. The treatment group received MPFF 500 mg twice a day for 4 months, and the control group a vitamin pill as placebo. Both groups were crossed over for another 4 months. The frequency and severity of lower abdominal pain and dyspareunia were scored on a scale from 0 to 6, and the results compared with pretreatment values. At the end of the fourth month, the frequency and severity of pelvic symptoms began to decrease with Daflon 500 mg compared with pretreatment and control. The mean scores were significantly less at the end of 4 months (3.9 + 1.1 vs 4.2 + 1.4, respectively, P<0.05).22

In a further trial of 20 patients,23 the randomization was performed in two groups of 10 patients. They received either MPFF 500 mg twice a day (treatment group) for 6 months, or vitamin pills as placebo (control group) twice a day over the same period. Treatments were then crossed over for a further 6 months.23

Patients were asked to assess their chronic pelvic pain monthly on a 6-point scale (0 for no pain to 6 for intense pain).

The demographic characteristics of patients at the inclusion are shown in Table I.23 No difference between groups was seen regarding age, BMI, number of pregnancies, presence of pelvic varices, or pain score and duration at inclusion.

Pellvic varices were seen in more than 70% of patients at laparoscopy (Table I). 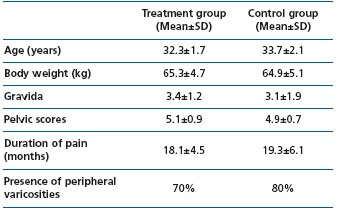 Right from the second month of trial 2, there was an improvement in pelvic pain scores in the treatment group compared with the control group which was significant (P<0.05) at the time of the crossover, ie, at month 6 (Figure 1).23

This confirms the preliminary results of the pilot study,22 which showed a significant decrease in the frequency and severity of pelvic symptoms in the treatment group compared with the control group at month 4. 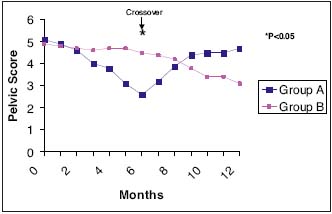 Compared with placebo in two randomized, doubleblind, placebo-controlled trials in 1022 or 20 patients23 with chronic pelvic pain diagnosed at laparoscopy with PCS with no other severe disease, MPFF 500 mg twice daily for 4 months or 6 months significantly reduced pelvic pain.

Based on our past experience, we conclude that venous dysfunction and stasis may be pathophysiologic components of pelvic pain in women with PCS. In cases of PCS, initial pharmacologic enhancement of venous tone may restore pelvic circulation and relieve pelvic symptoms such as pain and heaviness.