WHAT IS CHRONIC VENOUS INSUFFICIENCY?

The term chronic venous insufficiency (CVI) is defined by Ruckley1 as “the signs of that category of venous disease in which there are chronic pathologic changes in the skin and subcutaneous tissues of the lower leg. Subjects with truncal varices are not classified as CVI unless they have corona phlebectatica, lipodermatosclerosis, or open ulceration.” The term “insufficiency” deserves a clear-cut definition. It usually refers to the failure of an organ or of a given function. So, valvular insufficiency can be denoted as venous valve failure, and venous insufficiency as a venous system incompetence (superficial, deep, or perforator insufficiency for incompetence in, respectively, the superficial, deep or, perforating veins). A given patient may be affected by reflux in one or more of the venous systems.2 Venous leg ulcer is part of CVI since it affects the skin and is associated with reflux, which may occur in the superficial or deep venous system, or both. A literature review, involving 1153 ulcerated limbs with reflux, found that superficial reflux alone occurred in 45% of limbs, deep reflux alone in 12%, and both forms in 43%.3

WHAT IS THE PREVALENCE OF VENOUS LEG ULCERS?

The estimated prevalence in the general population of active or healed
venous leg ulcers is approximately 1%.4 Differences can be observed
depending on the type and age of population studied (Table I).The prevalence of leg ulcers increases with age.4,5 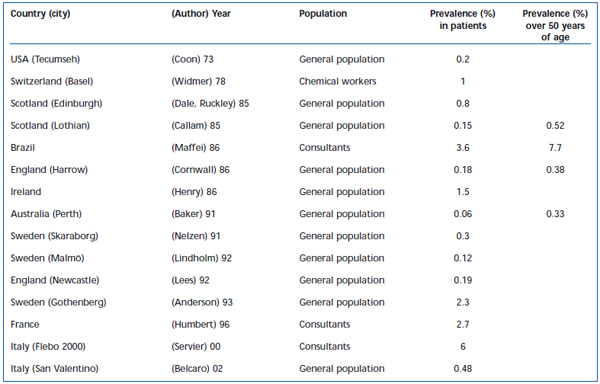 Table I. Prevalence of leg ulcers.

HOW SHOULD ULCERS BE ASSESSED?

Evaluation of healing requires the qualitative and quantitative analysis of chronic ulcers and wounds. The assessment of ulcers has commonly been based on the measurement of wound perimeter or surface area. Measurement of the volume and color of a chronic wound is also an important step in its follow-up over time. Quantitative methods used to assess wound-healing rate are essential for checking treatment response. Numerous techniques are available, ranging from the simple use of tracings to more sophisticated methods requiring the use of cameras, videos, and computers. The parameters most frequently used to measure a wound are the principal axes (length and width), the projected surface area, and the perimeter. Various mathematical calculations have made it possible to establish a relationship between the surface area of a wound, and its perimeter, length, and width. The most commonly employed technique uses an acetate film to obtain a tracing of the wound perimeter. Computer-assisted planimetry is a wound measurement method often used in clinical studies. Stereophotogrammetry measures the contours, surface area, and volume of a wound. It is based on determining the depth of the wound by viewing from two different angles. Ultrasound takes advantage of the difference in path length of an ultrasound wave reflected at the bottom of the wound, compared with the adjacent normal skin. This high-precision and simple method uses profilometric analysis followed by computerized volume assessment. Quantification of a leg ulcer is necessary to ensure an objective assessment. The techniques most widely employed in clinical studies involve the tracing of wound contours using transparent film. More sophisticated techniques that increase the accuracy of wound volume measurements are currently available, but are at present only employed in a research setting.6

WHAT ARE THE MECHANISMS OF APPEARANCE OF VENOUS ULCER?

Venous hypertension seems central to the skin changes seen in chronic venous disease. There is evidence for a linear trend towards more severe skin damage with increasing post-exercise venous pressure.7 Current thinking on the pathophysiological basis of the skin changes in chronic venous disease can perhaps be traced back to the observation that blood returning from feet that have been passively dependent for 40-60 minutes is relatively depleted of leukocytes, especially in patients with chronic venous disease.8 This suggests that leukocytes accumulate in the lower extremities under conditions of high venous pressure. It is likely that the accumulation is largely due to leukocyte adhesion to, and migration through, the endothelium of small vessels, especially post-capillary venules. Basic confirmation of what has come to be known as the microvascular “leukocyte trapping” hypothesis has come from immunocytochemical and ultrastructural studies showing elevated numbers of macrophages, T lymphocytes and mast cells in skin biopsies from limbs affected by chronic venous disease.9 In both acute10 and chronic11 experimental rat models of venous hypertension, elevated levels of tissue leukocytes were found in skin samples from affected limbs, but not from shamoperated controls.

HOW DOES DAFLON 500 MG WORK IN ULCER HEALING?

Daflon 500 mg may speed ulcer healing by modulating leukocyte-L-selectin interaction with endothelial selectins responsible for the initial stages of adhesion. By reducing the likelihood of leukocyte adhesion, Daflon 500 mg presumably acts through an antiinflammatory mechanism.12 Thus, among the many mechanisms at work in the pathogenesis of venous ulceration, the mechanism involving leukocyte activation and interaction with the endothelium hitherto seems to be the one most responsive to pharmacological treatment. Systemic drugs have been used in addition to standard treatments because of a theoretical ability to modulate one or more of the factors that have been identified in the pathophysiology of venous ulceration. A small number of drugs have been used with varying success. Stanozolol, a fibrinolytic anabolic steroid, was expected to break down pericapillary fibrin cuffs, but did not increase the rate of ulcer healing. Coagulation abnormalities observed in patients with venous disease have been improved by the use of aspirin. In contrast, a thromboxane receptor antagonist (ifetroban) failed to show benefit over compression therapy in ulcer healing. Among phlebotropic drugs, the use of horse chestnut seed extract and of hydroxyrutosides resulted in a reduction in both edema and symptoms of chronic venous insufficiency, but was not superior to compression in advanced chronic venous insufficiency, or in preventing venous ulcer recurrence. This may be because reduction in edema alone is insufficient to treat leg ulceration. The involvement of growth factors and leukocytes in the development of venous ulceration has opened up new areas of investigation.12 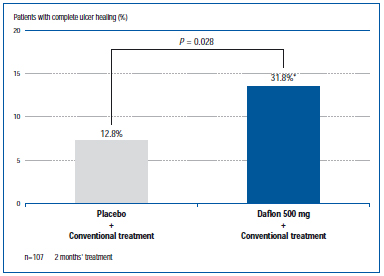 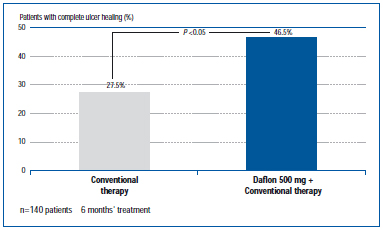 The results of a meta-analysis12 of 5 clinical studies using Daflon 500 mg in addition to standard treatment, in the largest ever venous leg ulcer population, confirm the results from other studies that showed venous leg ulcer healing is accelerated by adjunctive therapy (Figure 4). 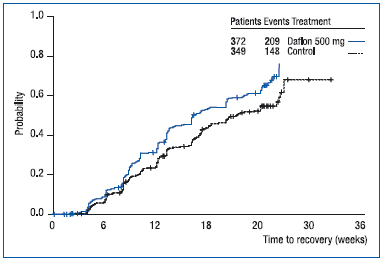 The internationally renowned medical journal, Drugs,17 has devoted a totally independent comprehensive review entirely to Daflon 500 mg. In the opinion of no less than 14 experts, Daflon 500 mg is recognized as “a well established phlebotropic and vasoprotective agent that has been intensively investigated in well designed clinical trials.” They conclude that, in the advanced stages, Daflon 500 mg may be used in conjunction with surgery or compression therapy or both.