Daflon 500 mg at the very heart of chronic venous insufficiency: results from the meta-analysis presented at the UIP Congress, San Diego, 2003

Chronic venous insufficiency (CVI) affects approximately 50% of the general population, of whom the vast majority remain untreated.1-3 Equally, venous leg ulcers (the most severe stage of CVI) are found in more than 1% of the adult general population and in 4% to 5% of patients aged 80 and over.4 In addition, the Guidelines of the American Venous Forum state that the recurrence rate for venous leg ulcer is in fact as high as 25% per year.5 In patients noncompliant with therapy, several studies have demonstrated a much faster rate of venous leg ulcer recurrence.6 Therefore, the prevalence of CVI, coupled with the severity of venous leg ulcers and their well-documented deleterious effect on Quality of Life in CVI patients, necessitates a treatment offering a recognized clinical efficacy that is both rapid and long-lasting.
For a number of years, daflon 500 mg, or micronized purified flavonoid fraction (MPFF), an oral phlebotropic drug consisting of 90% micronized diosmin and 10% flavonoids expressed as hesperidin, has been available as a treatment for all stages of CVI. In fact, in recent years, recognition has finally come from international experts of its efficacy in the treatment of CVI patients. Thanks to the results of numerous clinical trials, daflon 500 mg’s efficacy in the treatment of venous leg ulcers has been clearly demonstrated.
The efficacy of daflon 500 mg in CVI is due to its comprehensive mode of action, which acts at the heart of the disease, namely the inhibition of leukocyte adhesion. By this mode of action, daflon 500 mg is able to provide relief to CVI patients with the initial symptoms (ie, CEAP stage 0, C0s) of leg heaviness, itchiness, pain, and cramps to those with painful varicose veins (ie, CEAP stage 2, C2), to those with venous leg edema (ie, CEAP stage 3, C3), and finally to those with the most severe stage of CVI, namely venous leg ulcers (ie, CEAP stage 6, C6).

Until recently, clinicians used compression therapy with local care as the only treatment for venous leg ulcers. However, the clinical evidence for its efficacy is limited and often related to practices handed down by older clinicians to younger ones. In addition, in the past, American vascular surgeons only ever considered surgical treatment for venous leg ulcers as an effective therapy.
Today, on the other hand, the evidence for adding an oral pharmacological treatment, such as daflon 500 mg, to conventional treatment in venous leg ulcers has been finally recognized by the experts.5 In the recent 2001 edition of the Guidelines of the American Venous Forum, the option of an oral pharmacological treatment was discussed.5 For the first time ever, the American medical establishment recognized not only another addition to their therapeutic arsenal, but also its efficacy. A whole chapter described the evidence for the efficacy of oral pharmacological treatment in CVI and venous leg ulcers. A large proportion of this evidence, clearly demonstrated by clinical studies, was attributed to daflon 500 mg’s efficacy. Moreover, daflon 500 mg is the “only member of the edema-protective group that is effective in the most severe complications of CVI (ie, venous leg ulcers).”
In addition, the 2001 Guidelines for the treatment of CVI from the Italian College of Phlebology7 recommend that when surgery is neither feasible nor recommended, daflon 500 mg can be used in the treatment of venous leg ulcers.
Earlier in 2003, a review appeared in the world-renowned journal, Drugs.8 This review set out the independent opinions of 14 world experts in the field of phlebology on the therapeutic efficacy of daflon 500 mg in CVI, venous leg ulcers, and hemorrhoidal disease.2 By reviewing the evidence obtained from well-designed clinical trials, they recognized daflon 500 mg as a well-established phlebotropic and vasoprotective agent which, when used in conjunction with surgery and/or compression therapy, is efficacious in the most advanced stages of CVI.

The final confirmation, now recognized by the international experts, of daflon 500 mg’s efficacy in venous leg ulcers is provided by the results of a number of clinical trials. Three individual studies (already published) have demonstrated the advantage of daflon 500 mg in association with standard therapy over standard therapy alone9-11 (Table I). In addition, these results were combined with the results of two other studies (data on file) to form the basis for a “meta-analysis of the venous leg ulcer healing in prospective randomized studies using Micronized Purified Flavonoid Fraction.”12 These results were recently presented at the latest International Congress of the “Union Internationale de Phlébologie” (UIP), San Diego, Calif, and then subsequently published in Dermatological Surgery.
No less than 723 venous leg ulcer patients were included in this meta-analysis (making it the largest meta-analysis in venous leg ulcers ever performed). It confirmed that when daflon 500 mg is in association with standard therapy there is improved efficacy in the complete healing of venous leg ulcers over 6 months. In addition, daflon 500 mg accelerates ulcer healing (P=0.003) and results in a greater reduction in ulcer area (Pd0.01) (Figure 1). 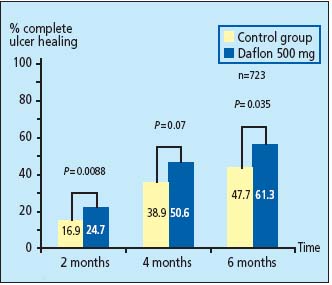 Figure 1. Therapeutic benefit of adding daflon 500 mg to
conventional therapy in the treatment of leg ulcers.

A mode of action at the heart of the disease

Whether the patient complains of the most severe stage of venous leg ulcers, or the initial symptoms and signs of CVI, the pathophysiological mechanisms remain the same throughout the disease. As Prof Nicolaides confirmed in San Diego, the leukocyte adhesion that damages the microcirculation, and is at the heart of venous leg ulcer development, also occurs at the level of the venous wall in early CVI patients. In these patients the subsequent cascade of inflammatory mediators results in the characteristic early symptoms of pain, itching, swelling, lesions in varicose veins, and edema. Daflon 500 mg is the only phlebotropic drug that inhibits leukocyte adhesion and thus the only phlebotropic drug that has demonstrated efficacy at all stages of the disease. Along with this inhibition of leukocyte adhesion, daflon 500 mg also increases venous tone and improves lymphatic drainage, thereby treating all the other aspects of CVI.
In addition, micronization is a high-tech process which reduces daflon 500 mg’s mean particle size by 35 μm. Its unique micronized form overcomes the poor gastrointestinal absorption common to all other flavonoids, thereby leading to a faster and better absorption in humans with improved bioavailability. This has been demonstrated in a singlecenter, double-blind, crossover study in 12 healthy male volunteers who first received a single dose of either radiolabeled daflon 500 mg or radiolabeled nonmicronized diosmin and then, 7 days later, underwent “crossover” for the other drug.13 The level of absorption was given by the level of urinary radioactivity of either drug. In fact, the level of daflon 500 mg absorption was almost twice that of nonmicronized diosmin, which leads to a more rapid onset of clinical efficacy.

The efficacy of daflon 500 mg in treating all symptoms and signs of CVI is due to its action on leukocyte adhesion. As with venous leg ulcer development, leukocyte adhesion is central to the development of symptoms and signs, whether in early or late disease. The leukocytes adhere to the venous wall causing endothelial damage, with a subsequent cascade of inflammatory mediators. This then results in the classical CVI symptoms of leg heaviness, itching, pain, painful varicose veins, and general discomfort. In fact, the symptoms that are often seen in patients in the early stages of the disease (C0s to C4) are very debilitating. These symptoms can impact heavily on patient’s quality of life.3
The evidence for daflon 500 mg’s efficacy on early symptoms of CVI comes from the RELIEF study. This was an international, multicenter, prospective, controlled study involving 5052 symptomatic patients (C0s to C4) with or without venous reflux.3 After a period of 6 months, daflon 500 mg, 2 tablets daily, had significantly reduced symptoms of leg heaviness, leg swelling, and cramps (Figure 2).
In addition to early CVI symptom improvement, daflon 500 mg also demonstrated, in the RELIEF study, an efficacy on the reduction of pain in patients with or without reflux (Figure 2). This improvement in pain was shown to apply for all stages of CVI, from early leg pain to painful varicose veins through to venous leg ulcers.
Final proof of daflon 500 mg’s efficacy in treating symptoms of the most severe stage of CVI, namely venous leg ulcers, comes from the meta-analysis. Another aspect of the metaanalysis investigated daflon 500 mg’s effect on symptoms associated with venous leg ulcers. A pool of 459 patients with heaviness and pain associated with venous leg ulcers were selected. Primary end points included the percentage of patients without symptoms at 2, 4, and 6 months according to the size/duration of the reference ulcer. daflon 500 mg improved symptoms from 2 months of therapy (and at 4 and 6 months) in ulcers of less than 12 months’ duration. This symptom improvement occurred in ulcers <10 cm, >10 cm, and globally (P<0.005). Along with the well-documented symptoms of CVI, the evolution of edema is a common sign in CVI patients at all stages of disease. Several studies have demonstrated daflon 500 mg’s efficacy in reducing leg edema. Using a volumetric technique, Prof Blume showed that, in 20 patients with CVI-associated leg edema, after 6 weeks daflon 500 mg significantly reduces edema by 8% (P <0.001).14
This improvement in leg edema was confirmed in the RELIEF study using the Leg-O-Meter, a standardized tool enabling the reproducible measurement of ankle circumference at a given level. In patients with or without reflux, daflon 500 mg significantly reduced ankle circumference and thus venous leg edema.3 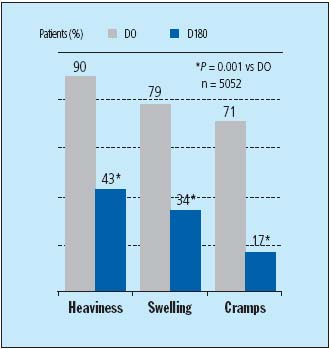 Figure 2. Evolution of symptoms in CVI patients with or without
venous reflux during 6-month treatment period of daflon 500 mg. 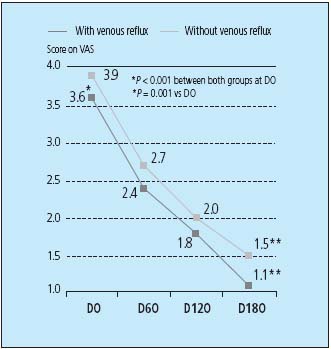 Figure 3. Evolution of pain in CVI patients with or without venous
reflux after during 6-month treatment period of daflon 500 mg.

Daflon 500 mg is unique among phlebotropic drugs. The impressive scientific evidence, gathered over many years, for its unique efficacy in venous leg ulcer healing has now been put into perspective by its recognition, in recent years, by the top world experts in the field of phlebology. Moreover, the meta-analysis has provided more incontrovertible proof of its efficacy in venous leg ulcers. The unique comprehensive mode of action of daflon 500 mg with its inhibition of leukocyte adhesion is central to its proven efficacy in CVI in treating the symptoms and signs of early disease (stages C0s to C4) through to those of the most severe complication of venous leg ulcers. Therefore, in any CVI patient who complains of either the very first symptoms or signs (including leg edema) or varicose veins or even venous leg ulcers, daflon 500 mg, 2 tablets daily, is the reference treatment proven to provide immediate and sustained relief to all.