Because the venous system is in many respects more complex than the arterial system, because chronic venous disease (CVD) is common in Western populations, and because both specialists and general practitioners have to deal with this disease, there is a need for practical support regarding CVD management in daily practice. This article summarizes the most recent guidelines regarding the place of venoactive drugs (VADs) such as Daflon 500 mg in the management of this disease. In addition, it makes suggestions regarding expected improvements in future guideline documents.

Chronic venous disease (CVD) of the lower limbs is often characterized by symptoms and signs as a result of structural or functional abnormalities of the veins. Symptoms include aching, heaviness, leg tiredness, cramps, itching, burning sensations, swelling, and the restless leg syndrome, as well as cosmetic dissatisfaction. Signs include telangiectasias, reticular and varicose veins, edema, and skin changes such as pigmentation, lipodermatosclerosis, dermatitis, and ultimately ulceration.

Epidemiological studies have shown that CVD has a considerable socioeconomic impact in Western countries due to its high prevalence, cost of investigations and treatment, and loss of working days.1,2 Varicose veins are present in 25-33% of female and 10-20% of male adults. In the Framingham study, the incidence of varicose veins per year was 2.6% in women and 1.9% in men.3 The prevalence of edema and skin changes such as hyperpigmentation and eczema due to CVD varies from 3.0% to 11% of the population and venous ulcers occur in as many as 0.3% of the adult population in Western countries.4 The considerable socioeconomic impact of CVD is due to the large numbers concerned, cost of investigations and management and morbidity, and the suffering it produces, all of which is reflected in deterioration of quality of life and in working days lost. The problem is compounded by the fact that CVD is progressive and has a propensity to recur. Measures to reduce the magnitude of the problem include awareness of the problem, early diagnosis and care, careful consideration of the necessity and choice of investigations, and discipline in the choice of management based on clinical effectiveness and cost. These requirements imply specific training in all aspects of this condition. Estimations of the overall annual costs of CVD vary from 600 to 900 million euros in Western European countries, representing 1-2% of the total health care budget, to 2.5 billion euros (US$3 billion) in the USA.5

SUMMARY OF THE RECENT GUIDELINES ON VADS

Numerous randomized, controlled, double-blind studies have demonstrated the anti-edematous effect and the effective attenuation by VADs of the symptoms related to CVD, such as heavy legs, pain in the legs, sensation of swelling, of burning in the legs, itching and restless legs. Currently, VADs are an established component of the therapeutic armamentarium for all stages of CVD.

The therapeutic efficacy of oral VADs on venous-related symptoms
The main indications of VADs are symptoms related to varicose veins or attributed to CVD and edema.8,9

A Cochrane review on VADs has been published recently by Martinez et al10 in which the efficacy of such drugs has been examined in detail. Studies were classified as level A (low risk of bias), level B (moderate risk of bias), or level C (high risk of bias). In this review, for every outcome variable except venous ulceration, the analyzes showed significant treatment benefits for the VADs compared with placebo when analyzed as either a dichotomous or a continuous variable or both in some cases. The only non-significant effects were for venous ulceration, itching assessed as a continuous variable, and paresthesia assessed as a continuous variable. For edema (RR 0.72, 95% CI 0.65; 0.81), trophic disorders (RR 0.88, 95% CI 0.83; 0.94) and restless legs (RR 0.84, 95% CI 0.74; 0.95) the analyses showed significant benefit of VAD treatment with no evidence of heterogeneity among studies.

On the basis of this review, the author of the chapter devoted to drug treatment of varicose veins, venous edema, and ulcers of the last (3rd) edition of the Handbook of Venous Disorders, Guidelines of the American Venous Forum, assigned VADs a grade 2B in the improvement of symptoms and edema associated with chronic venous disease.11

The article of Ramelet et al12 represents the proceedings of the International Medical Consensus Meeting on venoactive drugs in the management of chronic venous disease held in the framework of the 13th Conference of the European Society for Clinical Haemorrhoeology (ESCH), Siena, Italy. Data from RCTs were selected according to the predefined criteria of evidence-based medicine and on the experts’ own experience. Studies were classified as: grade A (at least two RCTs with large sample sizes, meta-analyses combining homogeneous results), grade B (RCTs with small sample size, single RCT), or grade C (other controlled trials, nonrandomized controlled trials) in the Siena consensus paper on efficacy of VADs on symptoms (Table I). Outcomes included only symptoms at any stage of the disease.

The international guidelines on the management of CVD14 used the same grading system as that of the Siena experts except for meta-analyses, which were grade B. Outcomes included not only symptoms but also edema and venous ulcer healing. When considering VADs, the guidelines largely summarized and endorsed the positive findings of the recent Cochrane reviews.10,13 The guidelines highlighted the evidence of efficacy of several VADs (calcium dobesilate, MPFF, rutosides, HCSE, proanthocyanidines, and coumarin + rutin) in CVDrelated edema, and the efficacy of MPFF as an adjunct to standard compression treatment in the healing of venous ulcers.

RCTs: randomized clinical trials
Table I. Classification of the RCTs on VADs by grades of recommendation in the international consensus statement (International Medical Consensus Meeting on Veno-active drugs in the management of chronic venous disease, 13th Conference of the European Society for Clinical Haemorrhoeology, Siena, Italy).6

According to these two recent guidelines on VADs,12,14 and given the consistency of their respective files, a grade A was assigned to 3 VADs: calcium dobesilate, MPFF (Daflon 500 mg), and HR-oxerutins for the effects of these VADs on symptoms and skin changes, which are summarized in Table II.

No reservations were voiced regarding the safety of VADs, except for coumarin-rutin and benzarone (hepatotoxicity) and for calcium dobesilate with which some cases of transient agranulocytosis were reported from 1992 to 2005.14

The therapeutic efficacy of oral VADs on edema of venous origin.

Although edema is a non-specific sign, it is one of the most frequent and typical symptoms and signs in CVD. All other causes of edema should be excluded to confirm its venous origin. CVD-related edema is described as a sporadic, unilateral or bilateral, and limited to the legs, which may also involve proximal parts of the lower extremities. It is enhanced by prolonged orthostatic posture, and improved by leg elevation.15

Several well-conducted controlled trials versus placebo or stockings12,14 have shown efficacy of oral VADs such as micronized purified flavonoid fraction, rutosides, horse chestnut seed extract, calcium dobesilate, proanthocyanidines and coumarin-rutin. In these trials, the evaluation of the anti-edema efficacy was based on objective measures, such as measurement of leg circumference, strain-gauge plethysmography, and water displacement. The results of many meta-analyses have confirmed the anti-edema efficacy of such medications (Table II).

Among VADs, horse chestnut seed extract and of hydroxyrutosides were not superior to compression in advanced chronic venous insufficiency16 or in preventing venous ulcer recurrence.17 Acceleration of the healing of venous leg ulcers (stage C6 of the CEAP) has been demonstrated by several double-blind studies using micronized purified flavonoid fraction (MPFF) (Daflon 500 mg) in combination with compression (Table II). This was confirmed in 2005 by a meta-analysis of 5 trials with MPFF as an adjunct to standard compression treatment in 723 patients in class C6 according to the CEAP classification.18 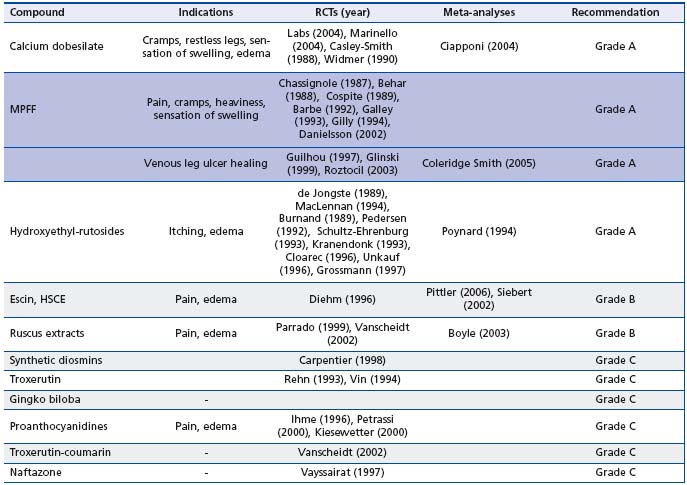 The third and most recent guidelines of the American College of Chest Physicians (Evidence-Based Practice Guidelines (8th edition) published in 2008 in Chest)7 included a section on the treatment of venous leg ulcers in patients with venous thromboembolic disease, with a review of the evidence for therapies added to conventional compression. It was recommended that in patients with venous ulcers resistant to healing with wound care and compression one should consider the addition of intermittent pneumatic compression (IPC) (Grade 2B) or pentoxifylline (Grade 2B); in patients with persistent venous ulcers MPFF should be added to compression (Grade 2B). The rationale for the Grade 2B recommendation is probably the absence of a single large, randomized, controlled study. The evidence for the addition of IPC was based on 2 randomized, controlled, clinical trials involving 45 and 47 patients.19,20 The evidence for pentoxifylline was based on the Cochrane meta-analysis of Jull et al21 of 8 RCTs involving 547 patients. Compression therapy was also used in 5 of the 8 trials.

The last edition (3rd) of the Handbook of Venous Disorders, Guidelines of the American Venous Forum, included a chapter on drug treatment of varicose veins, venous edema, and ulcers. The use of MPFF in combination with compression in long-standing or large venous ulcers was recommended (Grade 1B).11

The evidence for the addition of MPFF is based on the meta-analysis of 5 trials with MPFF as an adjunct to standard compression treatment in 723 patients as mentioned above.18 At 6 months, complete ulcer healing had occurred in 61% of the MPFF patients and in 48% of the control patients (RR reduction for persistent ulceration: 32%; 95% CI 3% to 70% P=0.03). Subgroup analyses suggested that the benefits of MPFF were greatest in ulcers > 5 cm2 and > 6 months in duration.

KEY QUESTIONS TO BE ANSWERED FOR
BUILDING FUTURE GUIDELINES IN CVD

An update of the “guidelines for testing drugs for CVD”22 is needed to allow the pharmaceutical industry investing the necessary resources to perform large and definitive clinical trials, which could improve the recommendations used by clinicians and organizations involved in decision-making in this important field of CVD. Such guidelines could:

• Reiterate the basic principles applied when reporting from (and setting up) any RCT, using the Consolidated Standards of Reporting Trials (CONSORT) statement. This CONSORT statement helps authors and investi – gators report trials by the use of a checklist and a flow diagram, available at www.consort-statement.org. Numerous papers have published this checklist.23-26
• Describe comprehensively patients at selection in a study, using the advanced CEAP classification, which implies that not only the C of the CEAP should be completed but also items E, A and P, together with a level 1 investigation. The addition of the new descriptor n for E, A and P items, when no venous abnormality is identified, may be useful when describing patients complaining of leg symptoms but with no visible or detectable signs of CVD.27
• Promote the use of validated tools to assess symptoms,28-35 edema and venous leg ulcer.36-39 Besides, there is a need for a consensus on the following end points:

Venous leg ulceration: when should we consider the ulcer has healed?40

• The role of VADs in the prevention of the natural history of CVD remains to be determined: are all VADs able to protect the “venous capital”?
• Consensual adoption of a simple and universally understood system of grading would be desirable.41