Download this issue Back to summary
Fedor LURIE, MD, PhD
Jobst Vascular Institute and the Division
of Vascular Surgery at the University
of Michigan, Ann Arbor,
Michigan, USA.

In 2017, the American Venous Forum (AVF) created a task force to determine if the CEAP classification needed a revision. An extensive literature review led the task force to conclude that there was sufficient evidence to update it to align with the newest knowledge of chronic venous disorder (CVD) and to clarify terminology. Using the modified Delphi methodology, the AVF task force concluded its 2-year project by publishing the CEAP 2020 update, which also became a reporting standard for studies of patients with CVD. The updated CEAP classification remains a discriminative instrument designed to describe the signs and symptomatic status of each limb of a patient with CVD at a specific time point. The CEAP 2020 update added a subclass C4c for corona phlebectatica. This modification reflects current understanding that corona phlebectatica has a similar natural history to the C4a and C4b subclasses. Another update for the “C” component is a modifier “r” describing recurrent varicose veins (C2r) or recurrent venous ulcer (C6r). The update for the “E” component of CEAP includes creation of two subclasses for secondary CVD (Es) as follows: (i) Esi–intravenous causes; and (ii) Ese–extravenous causes. Finally, the numbering of the venous segments in the “A” component of the CEAP is replaced by commonly used anatomical abbreviations.

Classifications of diseases and pathological conditions have a very long history. Perhaps the first practical classification was developed in 1662 by John Graunt who published an index of causes of mortality. A century later in 1768, François Boissier de Lacroix developed a systematic classification of all known diseases at that time. Around the same time, in 1780, William Cullen published the classification of disease that became widely used by clinicians, especially in the United Kingdom. As multiple classifications began to emerge, the need for a unified single classification became apparent. William Farr wrote in 1839, “the advantages of a uniform nomenclature, however imperfect, are so obvious as weights and measures in the physical sciences. It should be settled without delay and kept without change.” This need was addressed in 1855 at the International Statistical Congress in Paris, where Mark D’Espine and William Farr established the first international classification of diseases–a compromise between Farr’s phenotypical approach and d’Espine’s pathological approach to classification.

The current understanding of CVDs includes knowledge of key pathological mechanisms, such as reflux and obstruction, that can be targeted by interventions in some anatomical locations. It also includes empirical knowledge that some of the CVD phenotypes have a similar natural history and impact on a patient’s quality of life. However, the biological and pathological basis for these phenotypes is poorly understood. This complex situation has required a different classification. First introduced in 1996, the Clinical-Etiological-Anatomical-Pathophysiological (CEAP) classification addressed the complexity of CVD by incorporating four different taxonomical approaches. The clinical class “C” is a description of signs and the symptomatic status of a lower extremity (LE). These clinical classes are based on the most frequently seen manifestations of CVD that also have a similar natural history. The “E” (etiology) of the CEAP reflects the current understanding of what causes the signs and symptoms in an affected LE. The “A” of CEAP describes which anatomical segments of the LE venous systems are affected. Finally, the “P” (pathophysiology) describes identified hemodynamic abnormalities in the affected anatomical segments. Because of the complexity associated with CVD, an individual component of the CEAP classification alone cannot provide an appropriate clinical description of an affected LE, but a combination of the components gives the clinician a more complete understanding of each patient’s disease and guides the subsequent clinical management.

The introduction and wide use of the CEAP classification has made it possible to conduct large epidemiological studies and develop a set of clinical practice guidelines.1-4 Global use of this uniform classification has led to multiple comparable studies that have provided new evidence and improved our understanding of CVD. As new knowledge has developed, the classification itself has required revisions and updates. Thus, significant revision of the CEAP was done in 2004.5 Although that revision substantially improved the classification, the transition to a new version of CEAP took several years. Studies that were initiated before the revision continued to report their findings using the previous version, whereas some publications were utilizing the revised classification. The experience suggested that future revisions of CEAP should be backward compatible, so the revised version of the CEAP may add more specific subcategories but leave the previous categories unchanged.

In 2017, the American Venous Forum (AVF) created a task force to determine if the CEAP needed further revision. An extensive literature review led the task force to conclude that there was sufficient evidence to update it to align with the newest knowledge of CVD and to clarify terminology. The task force was extended to include four groups, each group to focus on one of the four components of the CEAP. The advisory group of experts who participated in the creation and previous revision of CEAP was assembled to ensure continuity of the process (Table I). Realizing that revision of the CEAP is essentially a consensus process, the modified Delphi methodology was used.6 During a 2-year process with multiple discussions, several proposed changes were rejected because they either lacked supportive evidence, violated one of the predefined revision criteria, or affected practicality of using the CEAP. These rejected proposals are described in the CEAP 2020 publication.7

The updated CEAP classification remains a discriminative instrument designed to describe the signs and symptomatic status of each limb of a patient with CVD at a specific time point. Manifestation of CVD changes significantly over time, so the same patient may have a different CEAP description at different time points. The interpretation of such changes is beyond the ability of discriminatory instruments, and the CEAP cannot and should not be used to interpret these changes as improvement or deterioration. These terms require evaluatory instruments capable of measuring the disease severity and its change over time or as a result of an intervention. The Venous Clinical Severity Score (VCSS) is an example of such an instrument.

All four components of the CEAP should be treated as nominal variables. This includes the clinical class “C” and its subclasses. It is not appropriate to state that a patient with a manifestation of CVD classified as C4 has a more severe condition than a patient classified as C2. This also applies to the subclasses of the CEAP. The CEAP 2020 update added a subclass C4c for corona phlebectatica. This modification reflects current understanding that corona phlebectatica has a similar natural history to the C4a and C4b subclasses. It was assigned to “c” subclass of C4 in order to preserve the previous version of CEAP, so the C4a and C4b subclasses remain unchanged. This order of subclasses reflects neither the severity of disease nor a different prognosis. Another update for the “C” component is a modifier “r” describing recurrent varicose veins (C2r) or recurrent venous ulcer (C6r).

CEAP: classification of CVD, not syndromes

The CEAP is a classification of CVDs, not syndromes. The difference becomes clear when comparing the CEAP definition of the secondary etiology of CVD and the definition of the post-thrombotic syndrome (PTS). Acute DVT can damage venous valves causing reflux–which will be classified as Esi; Ad; Pr by the CEAP–or cause an obstruction to venous flow by intravenous organized thrombus or synechia–which will be classified as Esi; Ad; Po. Each of these descriptions are specific to the sequelae of the DVT. In contrast, the definition of the PTS is based on a combination of symptoms and signs that are not specific, and in more than 50% of patients, are not related to the sequelae of DVT but are caused by preexisting primary CVD.8,9 This means that studies that use the PTS as an outcome, such as the SOX (Compression Stockings to Prevent Post-Thrombotic Syndrome) and ATTRACT (Acute Venous Thrombosis: Thrombus Removal with Adjunctive Catheter-Directed Thrombolysis) trials, are subject to significant misclassification bias.

As with the previous versions, CEAP 2020 can be used in two different ways. The abbreviated CEAP lists the highest clinical class with the symptomatic status (“s” for symptomatic, “a” for asymptomatic). This is followed by the description of etiology (congenital, primary, or secondary), anatomy (superficial, deep, perforators, or their combination), and pathology (reflux, obstruction, or their combination). Such descriptions provide minimum information about the patient but still may be sufficient for some purposes. The complete CEAP provides more specific information that is frequently sufficient for clinical management decision.

For example, two patients (Figure 1 A, B) with a healed ulcer in the left leg can be described as LLE (left LE): C5s; Es; Ad; Po by the abbreviated CEAP. Such description indicates that both patients have a healed ulcer, are symptomatic, and have secondary venous disease caused by obstruction in the deep veins. However, the complete CEAP description of these patients may be very different. The first patient is described as LLE: C3,5s; Ese; Ad; PoCIV. This patient has edema and a healed ulcer caused by extravenous obstruction of the left common iliac vein (May-Thurner Syndrome) and requires a work-up for possible iliac vein angioplasty and stenting. The second patient is described as LLE: C4b,5s; Esi; Ad; PoFV,POPV. He has lipodermatosclerosis and post-thrombotic obstruction of the left femoral and popliteal veins and is unlikely to be treated surgically. A complete CEAP provides all the information that otherwise would be missed. 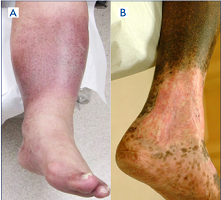 As with any other instrument, the CEAP has a number of limitations. Future revisions and updates on the CEAP classification may include some of the proposed modifications that have been rejected by the task force. It may be considered, for example, that some of the CEAP classes should include subcategories for the complications. A sufficient level of evidence is required for such revisions, including establishing the incidence of such complications in each of the specific CEAP classes and how they change the natural history of the CVD.

Although an imperfect instrument, the CEAP has proven to be an essential tool for practitioners and clinical researchers. Its worldwide utilization since 1996 has contributed to substantial progress in our understanding of CVD and development of new treatment options. Ultimately it has led to improved outcomes in the management of patients with venous disorders. CEAP 2020 is the evidence-based update of the CEAP classification that reflects the progress of the field of phlebology during the last two decades.