Materials and methods: A total of 400 cadaveric feet from the “don des corps” of the Descartes University (Paris, France) were injected with green Neoprene latex, which was followed by an anatomical dissection and a colored segmentation of the venous system. Duplex color sonography and CT venography with 3D modeling were used to investigate the foot perforator veins and their connections with the foot venous pump and the saphenous systems in patients with venous disease.

The injection technique has been described previously in our anatomical study of the foot venous pump.1,2 This study used 400 feet from 200 nonselected, nonembalmed cadaveric subjects from the department of the “don des corps” of the Descartes University (Paris, France), with an average age of 84. After exposing the medial marginal vein, a No. 19 butterfly venous catheter was inserted and directed toward the toes (countercurrent to the physiological blood flow). The common femoral vein was approached, and a tube was inserted to perform lavage-irrigation with soapy water, which was repeated several times, followed by a massage of the muscles to obtain a clear liquid. After ligating the common femoral vein, it takes about 30 minutes to fill the entire venous network by injecting 120-150 mL of green neoprene latex in each limb. Dissection was performed on the following day, and color segmentation was done by painting veins with different dyes to simplify their identification.

Color Doppler ultrasound was used to assess the anatomy of the foot perforator veins, their connections with the foot venous pump, and their hemodynamics. Multislice CT venography (also known as phlebo CT) was used to obtain the 3D modeling of the foot’s venous system, which strongly correlated with the dissection findings. Multislice CT venography was specifically indicated for patients with a complex venous disease or recurrent varices after surgery (REVAS). The multislice CT venography acquisition and reconstruction protocol and results (Table I) have been described previously.3-5 This technique provides an accurate depiction of the foot veins, with an interactive 3D assessment, including virtual dissection. These new imaging tools also provide access to virtual reality techniques,6,7 which is mainly the virtual dissection of the limb, and it is useful for making decisions in complex cases, for educational purposes, and to improve our knowledge of the venous anatomy. 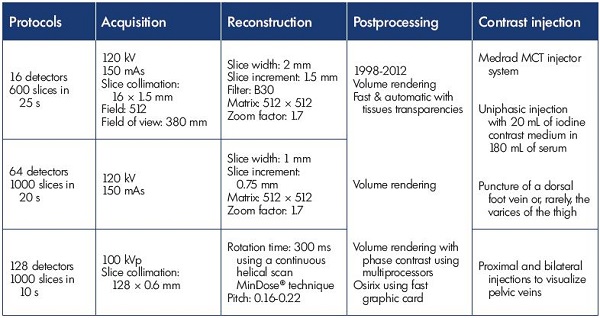 The venous blood reservoir of the foot, also called the foot venous pump, is located deeply in the plantar veins, between two plantar muscles, the quadratus plantaris, and the Hallux flexor longus (Figure 1).1,2 The medial (or internal) plantar pedicle is short (5 cm), rectilinear, and it is comprised of 2 to 3 veins that are often plexiform with several anastomoses. The lateral (or external) plantar pedicle is longer (12 cm), curved, and larger. It is located between the two muscle layers of the sole; therefore, it is compressed during the systolic phase of the foot venous pump. The lateral plantar pedicle is comprised of 2 to 3 veins (2 to 4 mm in diameter), which are connected to each other by several anastomoses (Figure 2). These two plexiform pedicles join posteriorly to form the calcaneus confluent of the plantar veins, where the blood is ejected upward into the posterior tibial veins, which are the main exit pain of the foot venous pump.1,2 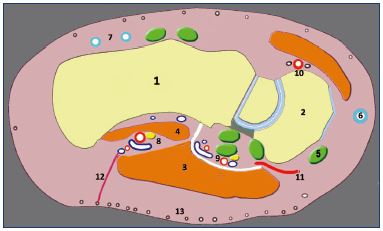 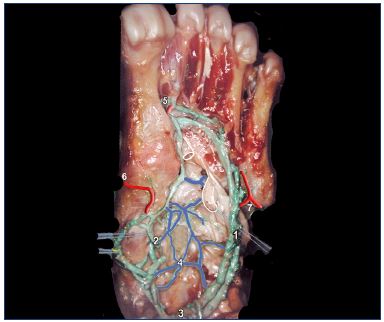 Figure 3 shows the complete anatomy which explains foot venous pump function. The pump (shown in green), which is comprised of plantar veins, has three parts (listed from front to back)–a suction pole (A), a reservoir (R) in the plantar veins, and an ejection pole (C) at the calcaneal confluent. Anteriorly, at the aspirational pole, blood enters the pump during relaxation of the plantar muscles during the foot’s plantar flexion. The ejection pole is represented by the calcaneal confluent or calcaneal crossroad (C). During foot venous pump systole, blood is ejected directly toward the posterior tibial veins and the great and small saphenous veins through the foot perforator veins. 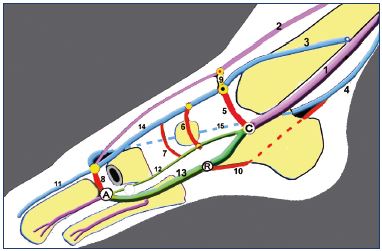 Anatomy of the foot perforator veins

Calcaneal foot perforator vein is a posterior foot vein
The calcaneal foot perforator vein originates from the calcaneal plexus and usually feeds the Achilleal tributary vein, which runs upward and medially to the Achilles’ tendon, and it commonly joins the small saphenous vein at the lower third of the calf (Figures 6, 7, and 10). To the best of our knowledge, the Achillian tributary has not been previously described. It is important because it establishes a direct connection between the lateral plantar veins and the small saphenous vein. 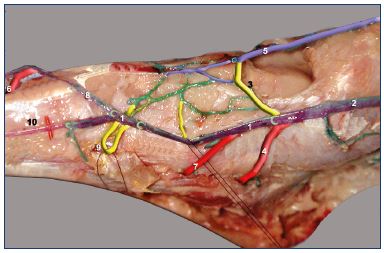 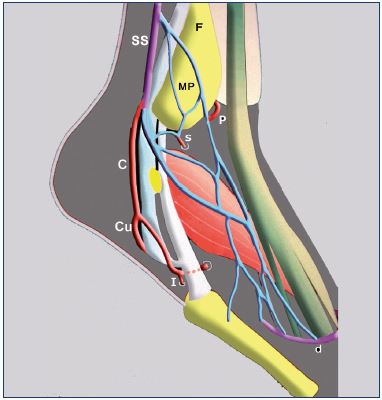 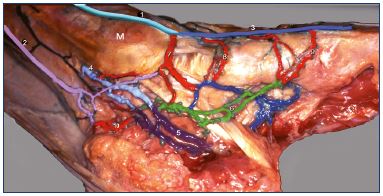 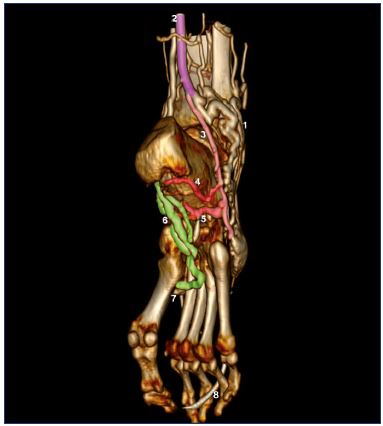 Anterior perforator veins of the foot and ankle
There are commonly three anterior perforating veins. One is connected to the medial marginal vein, and it is the dorsolateral component of the three great saphenous vein roots. The two other perforating veins come from the venous network of the dorsal foot. They constitute a separate entity, which is not connected directly to the plantar veins, and gives rise to the fibular and anterior tibial veins (Figures 8 and 11). 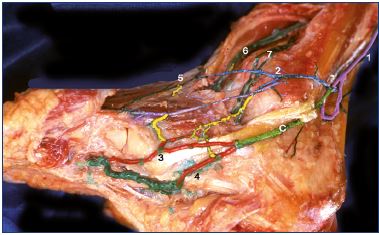 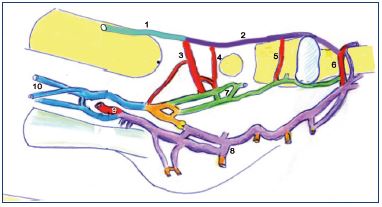 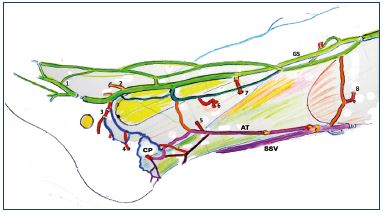 Perforator veins of the ankle and lower leg
At different levels, horizontal or oblique anastomoses (deep communicating veins) between the posterior tibial, anterior tibial, and fibular veins may be present (Figure 11). These horizontal anastomoses between the three deep veinous axes are not randomly distributed, but located at several levels, which define the hemodynamic levels, explain the fixed location of the leg perforator veins,<sup<8 and allow for venous blood flow exchange when needed. 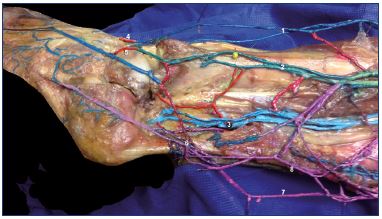 A unique feature for some foot perforator veins is that they are commonly provided with one-way valves to explain their unidirectional flow, from deep to superficial, which is unique in the venous system of the lower limbs. Figure 12 shows the valves present along all of the medial perforator veins, which explains the ascending flow in both saphenous veins during systolic activation of the foot venous pump. In fact, during calf systole, the posterior tibial veins are closed, and the main outlet could only be the two saphenous systems, in particular into the medial marginal vein via the perforator of the first intermetatarsal space. However, it is important that, rather than dividing the foot veins into deep and superficial, the foot veins should be divided into two functional units–medial and lateral. 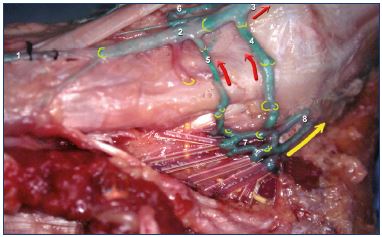 The medial functional unit is comprised of the medial plantar veins, the medial marginal vein, the dorsal perforating vein (or dorsal communicating vein), which gives rise to the anterior tibial vein and all of the medial foot perforator veins–inframalleolar, navicular (or scaphoid), and cuneal. The lateral functional unit is comprised of the lateral plantar veins and the calcaneal perforator vein, which forms the posterior root for the small saphenous vein. Therefore, during the systolic phase of the foot, venous return is shunted when the posterior tibial veins are not open, the blood is pushed up into both saphenous systems, ie, medially into the medial marginal vein, the main root for the great saphenous vein, and laterally via the calcaneal perforator vein, which is commonly connected to the Achillean vein and joins the small saphenous vein in the lower third of the calf.

During contraction of the calf muscle pump, while walking, the passage of blood through the posterior tibial and fibular veins is not possible.10 Consequently, during calf muscle pump systole, venous blood return from the foot must take alternative routes. This goal is achieved thanks to “physiological shunting” through foot perforator veins, from the deep plantar veins toward the superficial veins,11 including both saphenous axes. Outward blood flow through the lower posterior tibial perforator vein (Cockett I) is common in subjects without venous insufficiency, probably accomplishing the same functional purpose. Since foot perforator veins and lower leg perforator veins are located at the lower end of limb’s venous system, ie, below the calf muscle pump, inverted flow during muscle activity should not be interpreted as either abnormal or physiological “reflux,” but as a “physiological shunting.” Real-time ultrasound assessment during provocative maneuvers is a dynamic, noninvasive, diagnostic tool that can show inverted flow through these perforator veins in people without venous disease (Figure 13). Our anatomical data were confirmed with 3D modeling of CT venography data. Figure 14 shows the plantar veins with their connections to the superficial system, particularly the roots for the great saphenous vein. 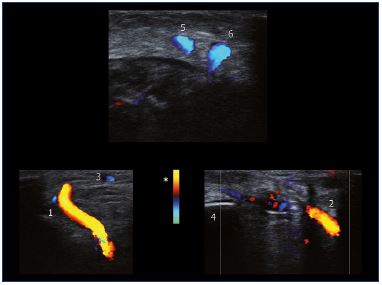 Figure 13. Ultrasound images of the right foot in a person
without venous disease.
Inverted flow through the first intermetatarsal (1) and premalleolar
(2) perforator veins during provocative maneuvers. Flow towards
the probe is coded in red (*). Ultrasound demonstration of
inverted flow within foot perforator veins is a common finding
in individuals without evidence of chronic venous insufficiency.
In the same subject, a transverse scan of the right lower leg
shows flow augmentation through both the Achillean tributary
(5) and the small saphenous vein (6) during foot´s venous pump
systole, which is induced by body weight displacement from the
contralateral limb toward the limb being studied.
Abbreviations: 1, first intermetatarsal perforator vein; 2,
premalleolar perforator vein; 3, superficial dorsal venous arch;
4, lateral malleolus; 5, Achillean tributary; 6, small saphenous
vein.
Images reproduced with permission from Dr Miguel Lo Vuolo. 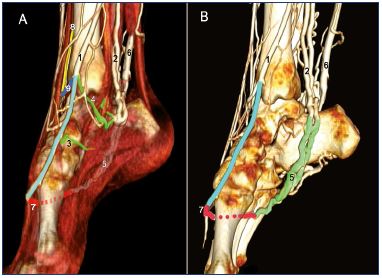 The role of the foot venous pump and foot perforator veins should not be underestimated. Despite the small volume of blood ejected with every step, foot perforator veins play an essential role in the lower limb’s venous return,9 which is the reason why any foot static disorder (flat or hollow foot) will impair the foot venous pump, and the clinical condition of a patient with chronic venous disease could worsen. As shown in our previous study, foot static disorder could be considered a major risk factor for chronic venous disease.12,13 In daily practice, it is mandatory to check for foot static disorder in our patients and correct the problem with an insole, which will improve the symptoms related to chronic venous insufficiency and foot static disorder. In fact, we should keep in mind that about 60% of the so-called venous symptoms do not have a venous origin.14

Foot perforator veins are characterized by a distinctive feature in the lower limb: the blood can flow from the deep to the superficial veins due to the presence of valveless or “inverted-valve” perforator veins, which act as shortcuts between the foot venous pump and the superficial venous system. During calf muscle pump contraction, these perforator veins shunt the foot´s venous return, which explains the augmentation in systolic flow that is observal in both saphenous axes.