Analysis of the treatment of patients with chronic hemorrhoids was carried out in the department of abdominal surgery at the N.N. Burdenko Main Military Clinical Hospital. The use of micronized purified flavonoid fraction (contained in Detralex) in 56 patients with stage II to IV hemorrhoidal disease in the pre- and postoperative period resulted in improved treatment outcomes.

The term “hemorrhoids” comes from the Greek words “haema” (blood) and “rhoos” (flowing). This term was first used by Hippocrates to describe bleeding from veins of the anus.1 The term “hemorrhoids” in English-language literature stands for both pathological and normal anatomical structures of the anal canal, which can be found in persons of any age. In developed countries, hemorrhoidal disease (HD) is the most prevalent disease of the rectum.2 The estimated population of people with hemorrhoids at any given time in Russia reaches 35% to 47% of all coloproctology disorders and the number of new cases of hemorrhoids diagnosed each year is 140 to 160 cases per 1000 in the adult population.3 Prevalence in Austria was estimated to be 39% of the adult population,4 and a high body mass index (BMI) was found to be an independent risk factor for developing HD. According to estimates from the United States up to 50% of the adult population will develop hemorrhoids, usually after the age of 30.5

Histological analysis of the hemorrhoidal plexus shows clear predominance of a venous (cavernous) component. Veins have thick walls composed of an endothelium lined with collagen fibers. This fibrous layer comprises a framemade of elastic fibers and is not associated with the mucosa. The veins form vascular “lakes” representing fusiform, sacciform, or serpiginous extensions with a structure resembling the structure of veins in cavernous bodies. There are also thin-walled capillaries consisting of simple endothelium surrounded by sparse collagen fibers, and they are hardly distinguishable from the surrounding connective tissue membrane, which has no elastic frame. These capillaries run between the mucous membrane and the cavernous bodies. Obviously, these tissues have independent vascularization. Another feature of hemorrhoidal plexuses is arteriovenous anastomoses (shunts).6 Their presence helps to explain arterialization of the venous blood contained in the cavernous bodies. It is also supposed that anastomoses allow for a more rapid filling of cavernous bodies during arterial blood inflow, observed immediately after defecation.

What factors lead to the transformation of this normal physiological process into a pathological one? The generally accepted pathological mechanism of the development of clinical symptoms of HD is that hemorrhoids increase in size and become displaced with time. As a result, lesions occur in the mucous membrane that lines the hemorrhoidal plexuses, which causes bleeding from the rectum.

Current concepts on the HD pathogenesis unalterably include venous components of hemorrhoids as one of the major substrates of the disease. Increase in the pressure in hemorrhoidal plexuses and their venous structures (corpora cavernosa) leads to lesion formation in the vascular wall, which accounts for the occurrence of consequences such as: (i) inflammation processes; (ii) swelling of the perivascular connective tissue; (iii) hemorrhoid thrombosis; and (iv) local arterial bleeding.

Doctors should direct their efforts, if possible, toward the above mentioned pathological mechanisms to more effectively relieve these manifestations. Therefore, we paid considerable attention to the drug containing micronized purified flavonoid fraction (MPFF)*. This oral venoactive drug, which consists of 90% micronized diosmin and 10% flavonoids expressed as hesperidin, diosmetin, linarin, and isorhoifolin, has been shown to effectively reduce symptoms of HD. Several randomized double-blind placebo-controlled trials have evaluated the efficacy of oral MPFF in the management of acute internal hemorrhoids.9-12 It is acknowledged that MPFF counteracts pathological mechanisms of HD at an early stage of clinical manifestation and has a positive impact on the local hemodynamic component due to normalization of venous tone in hemorrhoidal plexuses,13,14 a reduction in excessive capillary permeability and capillary walls fragility,14,15 an improvement in lymphatic drainage,16 and an inhibition of local inflammation processes.14,17,18

Patients who continue to have symptoms of acute internal hemorrhoids while receiving medical treatment may require instrumental or surgical treatment.14 Surgical treatment is required in a small fraction of patients (5% to 10%) with chronic external or internal hemorrhoids.19 The addition of MPFF to surgical procedures appears to be cost effective. MPFF may reduce the duration and/or intensity of post-hemorrhoidectomy symptoms20-23 and reduce patient recovery time. Hemorrhoid grade was not known in the previous trials.

The aim of the present trial is to know whether the association of MPFF with surgery for hemorrhoid stages II to IV may be more effective at reducing post-hemorrhoidectomy symptoms.

For patients who came in for outpatient consultation, MPFF was prescribed at 2 tablets daily for 30 days before the surgery in the treatment group (MPFF treatment group). In the postoperative period, all these patients received 2 MPFF tablets twice daily for 4 days, and then 2 MPFF tablets twice daily for 3 days. The control group was comprised of 24 patients who were not treated with MPFF before surgery.

Statistical analysis. Comparison was made between the results of the 2 groups (MPFF-treated group and control group) using a Student t test. The results were considered significant at P

A total of 56 patients underwent surgery for stage II to stage IV chronic HD in the Department of abdominal surgery at the N.N. Burdenko Main Military Clinical Hospital during 2008 to 2011; 35 were males and 21 were females. The age of the patients ranged from 26 to 65 years. Median age was 58.5 years. Fifteen patients were diagnosed with stage II HD, 32 patients with stage III HD, and 9 patients with stage IV HD. The most frequent reason for seeking medical advice was rectal bleeding, and then, prolapse of internal hemorrhoids. All patients in either group presented with rectal bleeding, pain, and prolapse.

Table I. Post-surgery symptoms in each group at day 2 after intervention. 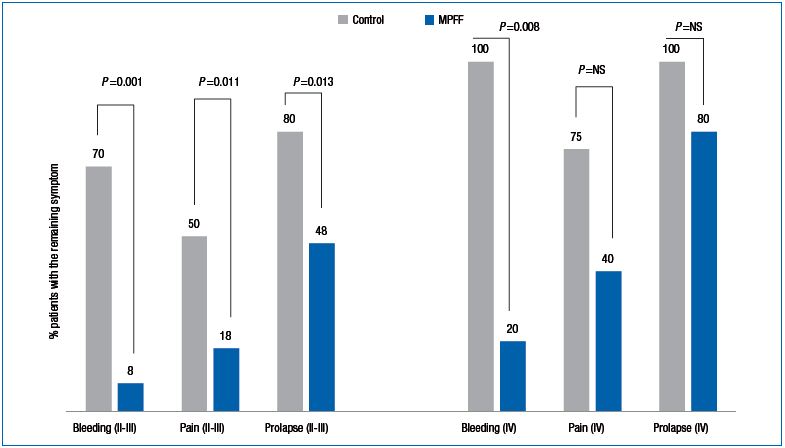 We noticed that in the MPFF-treatment group, not only were symptoms reduced, but also the need for analgesics, anti-inflammatory drugs, and hemostatic agents were reduced, which may decrease the total cost of treatment substantially. Figure 1 shows the comparison of the results (presence of post-surgery symptoms) between groups in stages II + III and stage IV HD patients.

In stage III to stage IV HD control group patients, duration of wound healing lasted between 3 and 5 days, and in most cases we failed to remove all the hemorrhoids in a single operation due to the advanced stage of disease and high risk of postoperative complications.

The role of the venous component in the pathogenesis of HD should not be ignored, as well as its involvement in the occurrence of post-surgery symptoms. The early relief of symptoms when associating MPFF with HD surgery may reduce the duration of the hospital stay. In addition, the reduction in the need for analgesics, anti-inflammatory drugs, and hemostatic agents not only may decrease the total cost of treatment, but may also positively influence the psychoemotional status of the patients. Therefore, we recommend the use of MPFF in association with HD surgery. 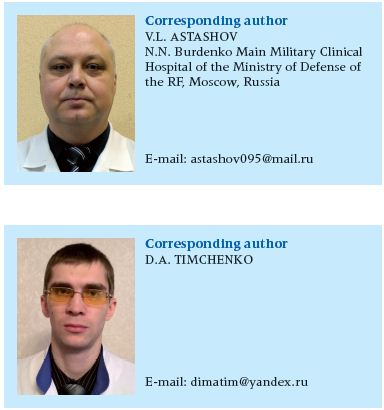