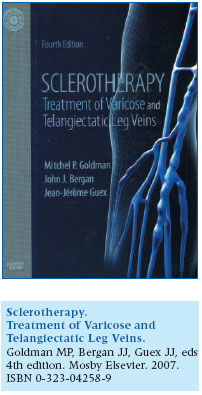 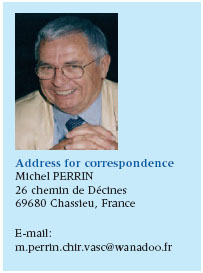 First published in 1991, republished in 1995, 2001, and 2007, this book remains the backbone of our knowledge concerning sclerotherapy of chronic venous disorders. Divided into 15 chapters plus 8 appendices, this reference work of 439 pages covers not only sclerotherapy, but also surgery and intravascular procedures for treating varices, the use of compression (contributor Hugo Partsch), venoactive drugs (contributor Albert-Adrien Ramelet), and laser and high-density light treatment of telangiectasia.

I particularly appreciated the 2 chapters devoted to noninvasive investigations and injection techniques. They provide all the details that both the beginner and the experienced phlebologist need to know. At the end of the various treatment chapters, the reader will find several case histories with outstanding illustrations that are crucial to understanding the clinical course throughout treatment, from preinterventional status to the final result. The last innovative chapter provides very practical and useful recommendations on how to set up a sclerotherapy practice.

I liked the 8 appendices at the end of the book. These give information on compression, manufacturers and distributors of sclerosing solutions, various equipment companies (including their Web sites), answers to patients’ questions, and a guide to reimbursement in North America.

More than 2600 references are quoted, including 536 on sclerotherapy complications and how to avoid them. Over 500 figures, most of them new and in color, illustrate the book and facilitate understanding of the anatomy, physiology, and pathophysiology, and of the technical details recommended by the authors. The DVD supplied with the book is particularly appealing and easy to use.

Some politicians may oppose globalization, but medicine has no borders, as is fully apparent from the diverse nationalities of this book’s authors and contributors. 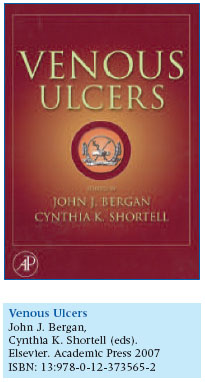 The last books published in English on venous ulcer were the third edition of Leg Ulcers. Diagnosis and Management by D. Negus, PD Coleridge-Smith, JJ Bergan (eds) in 2005, which was mainly a revision of the previous editions, and Management of Leg Ulcers by J Hafner, A-A Ramelet, W Schmeller, and UV Brunner (eds) in 1999.

All 22 chapters written by 39 different authors working in 8 countries are valuable, but some of them are more original. Among them, I particularly enjoyed:
• chapter 4 on ultrasound evaluation, which is very informative,
• chapter 5 on hypercoagulable states associated with chronic venous insufficiency, which is both uncommon and original,
• chapter 19, which describes free tissue transfer for limb salvage with a detailed analysis of the outcome of this unusual treatment,
• chapter 21, which deals with the very difficult situation in patients combining arterial and venous insufficiency.

The editors should be congratulated for describing all the available and updated methods for managing venous ulcers, including the most recent techniques, as adjuvant therapies and topical negative pressure techniques, foam sclerotherapy, endovenous treatment, including radiofrequency, and laser. Deep venous reconstructive procedures are not forgotten as one chapter is devoted to valve repair and another to dilatation and stenting.

As a European reviewer I have to say that 2 topics should have been considered: the first one, although debated, is the role of drugs as adjunctive treatment; the second concerns etiological ulcer diagnosis since it is sometimes difficult to identify non-venous leg ulcers.

All surgeons, dermatologists, angiologists, and internists who are in charge of treating patients with venous ulcers have a unique opportunity to update their knowledge by reading this appealing book of more than 300 pages lavishly illustrated, and amply referenced 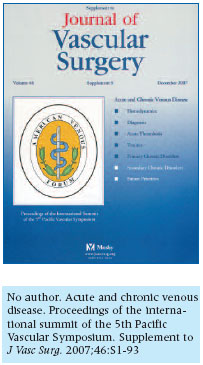 Two special issues of medical journals indexed in MEDLINE and written in
English, entirely devoted to venous disorders of the lower limbs, have been
published within the last few months.

Management of Chronic Venous Disorders of the Lower Limbs. Guidelines
according to scientific evidence. Int Angiol. 2008;27:1-60.

The first of these issues is a summary report on the meeting held in Big Island,
Hawaii, in January 2006. About 50 international experts on venous disorders
and representatives of the pharmaceutical industry (Figures 1-2), who are
listed in the preface, attended this 5-day meeting whose twofold aim was:

– First, to provide an update of knowledge on venous disorders of the lower limbs and to identify the areas where the former in particular is insufficient.
– Second, to identify where our efforts should be concentrated in order to fill in gaps, so as to select what appear to be the most promising future methods of diagnosis and treatment. 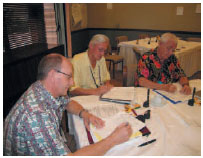 Figure 2. One of the working group (5th Pacific Vascular Symposium).

The special issue of Journal of Vascular Surgery starts with a short preface summarizing the objectives and the agenda of the meeting followed by the report, which is divided into 5 chapters with the following titles:

The overall unity of the special issue is ensured by the fact that the first author of each chapter is Mark Meissner, President elect of the American Venous Forum 2007 and the direct successor of the late Eugene D Strandness, University of Washington Medical Center, Seattle, Washington.

The CEAP classification is ever present in the background, as shown by the classification of chronic venous disorders as primary and secondary, which is unusual in phlebology. The approach to some disorders is quite typical of North American authors and may surprise “Old Europe”, but such approaches should encourage us to reflect. I am referring, in particular, to thrombolytic therapy of some cases of deep vein thrombosis (DVT) , and the large amount of space devoted to surgery of deep veins in reflux or obstructive syndromes.

Conversely, no noninterventional treatment is proposed in primary chronic venous disorders for patients rated C0s, C1 or C2, even though in this same chapter the 3 epidemiological surveys conducted1-3 identified a high percentage of such patients. Apart from in English-speaking countries, these patients received noninterventional therapies (venoactive drugs, compression therapy).

In terms of treatment, the grades of recommendations are limited to DVT and postthrombotic syndrome (pages 51-53). The rating scale used predates the one proposed by Guyatt,4 since the manuscripts of the different articles were submitted prior to its publication. The authors did not formulate any graded recommendation for the treatment of primary chronic venous disorders, which is readily understandable, considering the absence of a longterm, randomized, controlled study on this disease.

The most stimulating chapter is, of course, the one involving “future” research initiatives, presented in a table, where 13 investigative projects are listed. It is likely that many new approaches suggested both in terms of diagnosis as well as treatment will be developed over the next ten years ….To be continued.

The special issue of International Angiology was limited to chronic venous disorders.

It was produced at a 5-day consensus conference held in Cyprus, in December 2004, and attended by 25 specialists (figure 3) a large number of whom then participated at the above-mentioned meeting held in Hawaii.

The initial document, which contained several hundred pages, was reduced in size under the guidance of AN Nicolaides and E Kalodiki. The final report was a condensed 60-page version with no less than 824 associated references. It is divided into 3 chapters whose arrangement is more in conformity with European habits:

Each of these chapters is very well documented. Thus, in the pathophysiology section, macro- and microcirculation abnormalities are described separately. The review of treatment methods is also very complete and is presented as follows:

Results of these different treatments, their indications, and their grades of recommendation are listed in several tables with many references.

The last chapter summarizes the respective indications of the different investigations and treatments, by disorder. The following are reviewed in succession:

– Treatment of patients presenting with symptoms of venous disease with no clinical signs suggesting a venous – disorder. Such patients do exist, but rarely receive special attention
– Varicose veins
– Postthrombotic syndrome: prevention and treatment
– Leg ulcer: healing and prevention of recurrence

These two special issues discuss venous disease from a very different angles. Each deserves to be read attentively and they justify the title of this editorial: put them on your desk so that you can take your time in reading them. 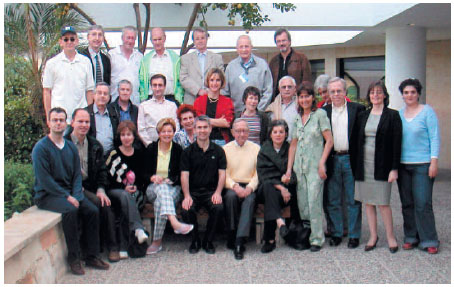