A commentary by Michèle Cazaubon 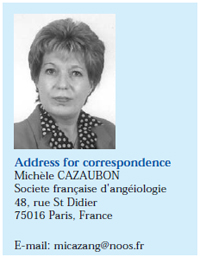 We are pleased to see publication of an article on venous disease in one of the most prestigious reference medical journals. It is an article designed to improve our understanding of the mechanisms that lead to chronic venous disease, and its excellent quality is to be expected considering the authors.

Problem position: An epidemiological approach was required to correctly position the problem. The Edinburgh study1 was used as the reference, the rationale being the good methodology of this study in over 1,556 subjects, 18 to 64 years of age, and, importantly, chosen from the general population (and not from a hospital cohort or private series of patients). Consequently, this may be one of the reasons for a marked predominance of male subjects in the prevalence of varicose veins (40% in men versus 16% in women), which is a well-known result of this study (the only one to find such results). The economic impact of chronic venous disease (CVD) is associated mainly with that of venous ulcers, and even though its prevalence does not exceed 1% of the population, it has a major impact on the health care budget (1% to 3% of total expenditure).

Among symptoms classically attributed to CVD, are aching, heaviness, a sensation of swelling, cramps, itching, tingling, and restless legs syndrome.2

The pathophysiological approach considers the precise contribution of venous hypertension and its causes, and in particular the authors emphasize the failure of the musculo-venous pump mechanism in obese subjects, or subjects with a sedentary life style. Recent data on “remodeling” of venous valves are well explained by the authors based on angioscopic studies using a fiberoptic catheter. Anatomical changes in these valves (stretching, thinning, twisting of valvular cusps) and histological findings (infiltration of valves by macrophages and monocytes with the release of adhesion molecules [ICAM-1]) are discussed. The vein wall also undergoes remodeling due to the action of growth factors released by macrophages and monocytes, with a succession of hypertrophic and atrophic zones in a given vein, associated with anomalies of collagen production, in particular reduced synthesis of collagen type III, the primary component in venous wall distensibility. The different growth factors also participate in these processes, which contrast synthesis and degradation of structures in the vein wall.

In hemodynamic terms, the authors reiterate the role of increased venous pressure and the well-known role of shear forces, better defined by the term “shear stress”, a recognized factor. An interesting finding was that a vein can well tolerate high pressures for a limited period of time. If the pressure is prolonged, however, valve remodeling begins, with gradual stretching of the valves and the occurrence of reflux. Alterations caused by shear stress partly explain what triggers an inflammatory reaction in the venous valve and vein wall.

Skin changes are clearly related to venous hypertension, and the authors review published studies, which have demonstrated the concomitant development of skin changes and venous pressure following exertion. Currently, the theory of cuffs of fibrin around dermal capillaries impeding diffusion of oxygen has been abandoned in favor of the theory of chronic inflammation, with the well-known studies of Coleridge-Smith on trapping of white blood cells, and more recent studies on white blood cell adhesion, even though the plasma factor responsible for such adhesion has not yet been discovered.

The authors conclude with a few implications for treatment, in particular regarding the possible use of cellular and molecular therapies in the future. They add that early pharmacological treatment to inhibit inflammation may offer the greatest opportunity to prevent venous hypertension, reflux, and inflammation. This could alleviate symptoms of chronic venous disease and reduce the risk of complications. The greatest strength of this article is the addition of striking artwork to the most recent theories “of the proponents of basic sciences,” which can be used for continuing medical education. The article also provides an update on unresolved problems of the progressive features of chronic venous disease. Lastly, I would advise everyone who eagerly wishes to read the entire article to start by memorizing the general aspects of chronic venous disease of the lower limbs. An excellent anatomical and physiological review also includes fine artwork, and an overview of recent findings in the field of venous valve mechanisms.3

Adapted from a review published in French in Angéiologie. 2005;58(3):62-63 with the kind permission of Dr Michèle CAZAUBON.
1. This fact could have been better explained in this article, which is intended for readers who are not necessarily familiar with venous diseases.
2. In the quoted article by Criqui et al, the restless legs syndrome is clearly called into question regarding its role in the symptoms of venous disease (Am J Epidemiol. 2003;158:448-456, also in Angéiologie, 2005).
3. M. Perrin. Affections veineuses chroniques des membres inférieurs. General aspects. Anatomical and Physiological review. EMC (Encylopedia of Medicine and Surgery), in French. Surgical Techniques, Vascular Surgery, Elsevier 2006. 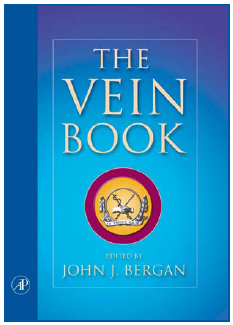 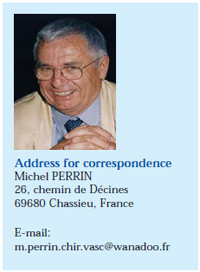 The Vein Book deserves its title, as every topic concerning this field is covered in its 617 pages and 65 chapters. Editor-in-Chief J-J Bergan has brought in 89 contributing authors to achieve this challenging task. Most of them are well known in the venous cosmos, but interestingly they come from different disciplines, and include angiologists, epidemiologists, basic research scientists, internists, phlebologists, researchers, and surgeons, and as they practice in different countries the final result is a worldwide view of the specialty. The book is divided into 4 parts: Basic Considerations (Associate Editor L. Pascarella), Primary Superficial Venous Insufficiency (Associate Editor MP. Goldman), Venous Thromboembolism (Associate Editor AJ. Comerota), and Chronic Venous Insufficiency (Associate Editors P. Neglen and S. Raju).
Starting with an historical introduction illustrated by beautiful drawings, some of them unpublished, the basic considerations deal with embryology, anatomy, epidemiology, physiology, pathophysiology, investigation, and classification.

The second part, whose 202 pages make it the longest, is devoted to superficial venous disorders. Clinical examination, ultrasound investigation, quality of life, treatments, and their results are successively set out. Telangiectasias, reticular and varicose veins are covered, and all intervention treatments are depicted: sclerotherapy (liquid, foam), conventional surgery, phlebectomy (ambulatory, powered), laser and VNUS® Closure®. Some special topics are dealt with: small saphenous vein reflux, recurrent varicose veins, and pelvic congestion syndrome. It is regrettable that only the mechanism of compression action is described, that its precise indication in chronic venous disease is not given, and that venocative drugs are not mentioned at all.

The third part is devoted to every aspect of venous thromboembolism, including the etiology of thrombosis, its basic mechanisms, acquired and congenital hypercoagulable syndromes, thrombotic risk factors, prophylaxis and diagnosis of thrombosis. All treatment options are reported in detail, including the most recent and sometimes controversial techniques. From conventional heparin treatment to thrombolytic therapy, including thrombectomy (mechanical or percutaneous) and cava filters (temporary or permanent). Two chapters cover upper limb thrombosis. Conservative Europeans and others should be surprised by the interventional approach recommended here.

The last part is entitled chronic venous insufficiency (CVI). According to the CEAP classification, the term chronic venous insufficiency should only be used to describe C3-C6 patients, but that does not mean that in patients with edema or skin changes the etiology is not primary varices. This point is underlined in the first chapter whose title is the primary cause of CVI. It again seems that advanced CEAP describes the patient more precisely than the basic CEAP, which only reports the upper clinical class and can be confusing, or at least imprecise. Detailed reports are given on the indications and results of superficial venous surgery, subfascial endoscopic perforator surgery, and ultrasound sclerotherapy of perforating veins. The following chapters focus on deep venous obstruction (diagnosis and treatment) and reflux (valve repair and prosthetic venous valves). Again, conservationists should consider these controversial new procedures warily, as there is no randomized controlled study comparing them with compression, but most patients treated by venous reconstructive surgery were not improved by conservative treatment.

More than one thousand references are quoted in the different chapters and the design of the Vein Book is outstanding, including the printing, figures, and tables.

If you’re seeking a professional gift for someone interested in venous disorders, I suggest you need look no further than the Vein Book.

We use cookies to ensure that we give you the best experience on our website. If you continue to use this site we will assume that you are happy with it.OkRead more