Classification of primary varicose veins of the lower extremities: a consensus statement from Latin America

This document is the result of two consensus conferences organized with the collaboration of a group of specialists representing several Latin American countries, who met with the purpose of establishing a classification of primary varicose veins. The Latin American Consensus Committee (LACC) met for the first time in Cuernavaca, Mexico, in February 1998 and almost a year later in Miami, Florida, in January 1999. Among the participants were members of the Pan-American Society of Phlebology and Lymphology, International Union of Phlebology, World College of Vascular Diseases, the American Venous Forum, and the Latin American Venous Forum (LAVF). The conferences were supported by an educational grant from the Institut de Recherches Internationales Servier. Disciplines involved in the study of venous diseases and its complications were well represented among the members of the Faculty: Epidemiology, Pharmacology, Genetics, Dermato-pathology, Physiology, Angiology, and Vascular Surgery. The different aspects and characteristics of primary varicose veins were thoroughly discussed. The present report represents the consensus of the participants at the meetings.

Venous diseases are one of the most common problems encountered in medical practice throughout the world. The members of the LACC specifically focused on obtaining information about the prevalence of chronic venous insufficiency (CVI) in Latin America, and in developing a simple, easy-to-understand, and easy-to-use classification of primary varicose veins.
The scarce regional reports available at the present time1,2 suggest that similar to what occurs in Europe and other countries, CVI in Latin America has a high prevalence in individuals of both sexes, and produces a range of clinical manifestations that may lead to different degrees of disability.3 Varicose veins occur in about 30% of females and 15% of adult males.4-17
In an epidemiologic study of varicose veins, Brand reported an incidence of varicose veins per year of 1.9% in men and 2.6% in women.15 The prevalence of venous diseases has stimulated various organizations to form consensus groups to study, in a systematic manner, the impact and consequences of the disease, not only on the quality of life of the patient, but also on the high cost to society caused by the loss of work and disability. Hume, in his Presidential Address to the American Venous Forum, reported that the annual cost of CVI in the United States is approximately 1 billion dollars.16 Like the care provided for leg ulcers, varicose veins are treated predominantly by physicians. However, due to their prevalence, there is a current trend among several medical specialists, such as dermatologists, phlebologists, and angiologists, to include varicose veins within the scope of their specialty. The care of varicose veins represents a considerable overload in surgical care in a hospital. This had led to the development of outpatient clinics where patients can be operated on and discharged a few hours after the procedure. Ambulatory venous surgery has been performed for many years in a safe and effective manner.18-20 These procedures have lowered the cost of varicose vein surgery and decreased the surgical caseload of the general surgical training programs.
From the outset, the goal of the LACC was to develop a classification of primary veins of the lower extremity. Why should we add another classification to the ones currently known? All the current classifications have advantages and disadvantages. Some of them are too simple and others are too complicated. There is no unanimous acceptance of any classification. We reviewed all the published classifications, including the most recent.21,22 The most thorough classification of chronic venous disease was the result of the Consensus Committee of the American Venous Forum that met in Maui, Hawaii, in February 1994. The deliberations of the Committee produced the Clinical, Etiologic, Anatomic and Pathophysiologic (CEAP) Classification. The latter was prepared with the aim “to present a more precise classification of chronic venous dysfunction which is simple enough to encourage its universal acceptance.” The classification of venous disorders of the extremity was based on their clinical, etiologic, anatomic, and pathophysiologic (CEAP) characteristics. Despite its thoroughness and objectivity, this classification has often been the subject of criticism for its complexity, which prevents its application in clinical practice and ultimately limits its usefulness to clinical investigation reports. The CEAP classification allows description of CVI only and not grading of the disease. Therefore, grading scales have been further set up.23,24 The latest one has been recently validated.25 In this classification, clinical description of CVI has been divided into 7 classes, going from 0 to 6. Varicose veins of the lower extremities are classified as clinical “C” classes 1 or 2. Within the Anatomic classification, telangiectasias are defined as intradermal veins with a diameter of 1 mm or less, reticular veins as intradermal veins measuring 4 mm or less, and truncular veins as subdermal veins greater than 4 mm in diameter. Due to the complexity of the CEAP classification, which at the present time is going through a thorough process of revision, the LACC met in two conse- cutive years to define the impact that CVI produced in Latin America and propose a simple, practical classification of primary varicose veins that does not claim to substitute the CEAP. It is of interest to note that, since 1999, the date of the LACC consensus, several committees have independently met in Europe and in the United States to discuss refinements of the current CEAP classification.26 It is hoped that the efforts of the LACC be considered as a step in the right direction trying to simplify and refine the clinical segment of C of the CEAP. To achieve this objective, each of the participants was assigned to discuss a particular subject ranging from epidemiology, pharmacology, genetics, dermato-pathology, clinical manifestations, and pathophysiology. These subjects were extensively discussed by the members of the Committee. 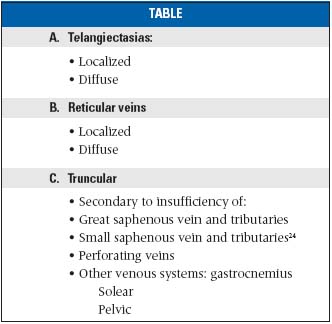 • Primary varicose veins. Primary varicose veins of the lower extremities are dilated and tortuous veins which function abnormally and whose etiology is largely unknown.22-34 From the anatomical point of view, the varices may be superficial or deep. Varicose veins may be secondary to insufficiency of the superficial system or to insufficiency of the deep system and some large perforators. It is recognized that the deep system may be the subject of primary valvular incompetence but the superficial system is the most frequently affected.

• Telangiectasias are dilatations of intradermic veins measuring 1 mm in diameter or less. The dimension is 1 mm. They may be localized or diffuse and may be red, purplish, or blue. They are localized most commonly in the thighs, but may affect any other area of the extremity. Often they are present in limbs suffering concomitantly from other types of varicose veins such as reticular or truncular varicosities.

• Reticular varices are dilated veins of the dermic 26 plexus measuring from 1 to 4 mm. Depending on their location, their color varies from purplish to blue. They may be localized or disseminated and may be associated with other stages of varicose veins in different territories of the extremity.

• Truncular varicose veins are varicosities distributed along the great or small saphenous veins and their tributaries. Their diameter is 4 mm or larger and may be associated with varicose veins of other venous territories such as pelvis and gastrocnemius and soleus muscles. They may be the result of isolated incompetent perforators.

Primary varicose veins of the lower extremities can be classified into four clinical stages:

• Stage 3. Skin Changes I. In this stage, pigmentation, eczema, scaling, and cellulitis are common. These manifestations are usually localized to the distal third of the leg and predominantly on the medial aspect.

• Stage 4. Skin changes II. Lipodermatosclerosis and ulceration. Lipodermatosclerosis is an advanced stage of chronic venous insufficiency. It may be present as a result of superficial venous incompetence, either alone or in combination with deep venous insufficiency. The latter may be the result of reflux, obstruction, or a combination of both. The microcirculatory changes and the chronic inflammatory process produce fibrosis and scar tissue which involve skin, subcutaneous tissue, and sometimes fascia and periosteum.

• Ulceration is the final stage of either superficial or deep CVI. It is localized preferentially on the medial aspect, distal third of the extremity, even though less frequently it may occur on the lateral aspect of the leg and dorsum of the foot.

1.Varicose hemorrahage
This is a frequent acute complication in those who suffer from varicose veins. Bleeding may be external or subcutaneous. The hemorrhage may be alarming.

2.Varicophlebitis
Also known as varicothrombosis, it is characterized by the presence of a thrombus in varicose veins, which provokes acute inflammatory clinical manifestations such as pain, redness, swelling, and induration. It generally occurs in the truncular veins.

A simple classification enables us to have a common language, and allows us to guide the therapeutic stages in a simple manner. It is simple for the specialist, and understandable for the nonspecialist. Differing from others, this classification, based on descriptive clinical observations, allows us to observe the existence and magnitude of CVI. Using appropriate noninvasive diagnostic techniques, it is possible to confirm the diagnosis and determine the degree of severity of the disease, which is essential for its proper management. The proposed classification is simple and easy to use. It will guide the physician to select the necessary noninvasive diagnostic methods to arrive at a working diagnosis and proper management.