Clinical characteristics, symptoms, and quality of life evolution in outpatients with chronic venous disease treated medically or with endovascular procedures: results from the ALIADO and ALIVIO programs

The following report will discuss the results of two observational multicenter surveys–ALIADO and ALIVIO–that were carried out in outpatients with symptomatic chronic venous disease (CVD) in Colombia between 2016 and 2018 in which clinical characteristics, symptoms, and quality of life evolution were evaluated. The ALIADO program (quality of life in outpatients with CVD) evaluated patients with CVD who were seen in the framework of ordinary consultations performed by general practitioners. The ALIVIO program (endovenous ablation of varicose veins in Colombia) evaluated patients with CVD who underwent endoluminal procedures, which were performed by vascular surgeons, for the treatment of varicose veins. After a clinical examination that included the clinical, etiological, anatomical, and pathophysiological (CEAP) classification, a medical therapy was offered at the initial office visits, including phlebotonics, micronized purified flavonoid fraction in most cases, lifestyle advice, and compression therapy. Patients were followed-up in a second visit in which general practitioners evaluated both symptom evolution using the visual analog scale and quality of life evolution using the ChronIc Venous Insufficiency Quality of Life Questionnaire (CIVIQ-14) and the Global Index Score. The results showed that symptoms, including leg heaviness, pain, swelling, and cramps, and quality of life significantly improved in the follow-up visit after combining pharmacological treatment (MPFF), patient education, and compression therapy.

Chronic venous disease (CVD) is a potentially serious common disease1 that is frequently underestimated,2 with a high prevalence in the adult population, especially in occidental countries.3 Although CVD is not a life-threatening condition, it seriously affects patient’s quality of life and produces loss of working days for affected patients.4 Primary care physicians, general practitioners, and specialists, such as vascular surgeons, are concerned and both have a role in the diagnosis and treatment of patients with CVD. Two surveys–ALIADO and ALIVIO– were implemented in Colombia to observe the evolution of outpatients with CVD seeking care with general practitioners or submitted for endovascular procedures for varicose veins performed by vascular surgeons.

ALIADO was a national, observational, prospective, multicenter survey conducted between October 2016 and September 2017. CVD patients ≥18 years, regardless of the CEAP classification, consulting general practitioners, were enrolled in the study. Patient’s clinical data, including quality of life measured using the ChronIc Venous Insufficiency Quality of Life Questionnaire (CIVIQ-14) questionnaire and CVD symptoms assessed using the visual analog scale (VAS), were recorded at inclusion and after a follow-up visit.

ALIVIO was implemented in adult symptomatic outpatients with CVD undergoing endovenous ablation for varicose veins performed by vascular surgeons. At inclusion, symptoms were evaluated using a 10-cm VAS and quality of life was evaluated using the CIVIQ-14 questionnaire. After the procedure, patients were asked to return for a follow-up visit at least 1 month later. During the follow-up visit, vascular surgeons assessed symptoms using VAS and quality of life using CIVIQ-14. Both surveys were approved by a local ethical committee.

The aim of the present analysis is to analyze the methodology of each survey, to present and compare the results of both surveys, and to have a global vision of chronic venous disease according to the clinical setting and the evolution of symptoms and quality of life with pharmacological treatment (micronized purified flavonoid fraction [MPFF]), lifestyle advice, and compression therapy. 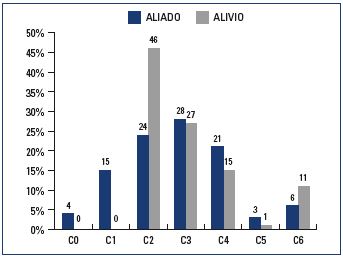 Figure 1. CEAP classification at inclusion according to each
study. 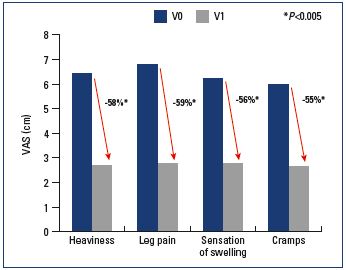 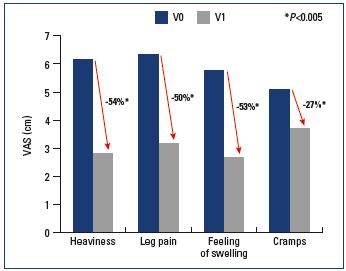 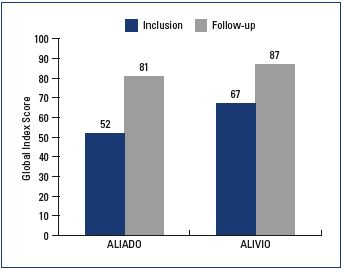 In this paper, we presented and compared two studies conducted in Colombia in 2016 and 2018 with different methodologies and in different settings. In the first, general practitioners evaluated outpatients with symptomatic CVD, and, in the second, vascular surgeons evaluated patients with CVD who were treated with endovenous ablation for varicose veins, with 1135 patients (total between the two studies) being evaluated for the evolution of symptoms and quality of life. Although the studies were conducted in different contexts, there are common characteristics that were evaluated, such as demographics and the presence and evolution of clinical symptoms and quality of life, allowing the weighted averages to be compared. A look into the demographic data enabled us to confirm the preponderance of CVD in females; a 4:1 ratio to men in the group receiving medical treatment and a 3:1 ratio to men in the group treated with endovenous ablation of varicose veins. The average age was close to 60 years old in the medical treatment group and 6 years lower in the group treated with endovenous ablation procedures.

Regarding the reasons for consultation, we confirm that pain is the main symptom leading patients to seek medical advice (86% of cases) (Table II). However, it is noteworthy that the number of patients with pain was higher among the patients seeking medical advice with general practitioners vs surgeons. It is also noteworthy that there is a high proportion of patients with telangiectasias and reticular veins, 2 patients out of 3 in the medical treatment group.

Obviously, varices were a cardinal sign present in 65% of the patients in the medical treatment group. However, it is meaningful that only 60% of patients undergoing an intervention consulted for varices, showing the importance of a good anamnesis and physical examination. During anamnesis, the cardinal symptom was leg pain, which was present in almost 90% of the patients, followed by heaviness in almost 80% of the patients and sensation of swelling and cramps in 50% of the patients. Surprisingly, these figures are higher in the medical treatment group vs the endovascular intervention group (Table III). Regarding the physical examination, nearly 80% of the patients that consulted a general practitioner presented clear signs of CVD and only 20% did not present evident clinical signs (4% were in CEAP class C01 5% in CEAP class C1).

Table II. Reasons for consultation between study groups showing the noncumulative percentages; each patient can have more than
one.

Less than a half of patients treated with endovascular procedures (46%) had varices, where the main sign was edema (27%). In the other patients (27%), the procedure was done due to skin changes in the ulcers (active or healed). There was an important reduction in symptoms after treatment. In the medical treatment group, which included lifestyle advice, compression therapy in some patients, and pharmacological treatment in most, 92% of patients were asymptomatic or rarely symptomatic. There was also a decrease in the presence of symptoms in the group treated with endovascular procedures, where 42% of patients were asymptomatic or rarely symptomatic during the follow-up (Table IV). Both studies showed a significant reduction (more than 50%) in heaviness, pain, and the sensation of swelling. However, there is an unexplained low decrease (27%) in cramps in the endovascular treatment group. Finally, there is a significant improvement in the quality of life in both groups, keeping in mind that these are different cohorts and not strictly comparable.

We have confirmed the higher prevalence of CVD in females who consult for symptoms of CVD to both vascular surgeons and general practitioners than in men. Pharmacological treatment with MPFF, compression therapy, and lifestyle advice should be part of the medical treatment for patients who are treated noninvasively and for those who are treated with minimally invasive procedures to provide a significant improvement in symptoms and a parallel improvement in quality of life.

We use cookies to ensure that we give you the best experience on our website. If you continue to use this site we will assume that you are happy with it.OkRead more