Data regarding past and present stocking use was collected from 3144 chronic venous disease (CVD) patients who had been under the prior care of primary care physicians or specialists. Only 21% of patients reported using the stockings on a daily basis, 12% used them most days, and 4% used them less often. The remaining 63% did not use the stockings at all or abandoned them after a trial period in the past. Compressive stockings were inapplicable in about a quarter of patients due to the condition of the limb or the general health of the patient. They were ineffective despite wear in about a third of CVD patients. In the remainder, noncompliance with prescribed compressive stockings is an apparent major cause of treatment failure. Nonuse and noncompliance with compressive stockings is very high in patients with CVD regardless of age, sex, etiology of CVD, duration of symptoms, or disease severity. Reasons for nonuse of stockings can be broadly divided into three categories: (1) inapplicability (2) inefficacy, and (3) noncompliance. The reasons for noncompliance can be grouped into two interdependent major categories: (1) wear-comfort factors, and (2) intangible sense of restriction imposed by the stockings.

Compression is effective when used as intended in treating the various symptoms of chronic venous disease (CVD).1 Some patients, however, will not use compression stockings on a regular basis or at all, leading to persistence or recurrence of symptoms. This problem of noncompliance is well known to treating phlebologists and has been the subject of debate as to how compliance with compression stockings could be improved.2 Available data to delineate the extent of noncompliance in CVD has been limited to small series of patients with stasis ulceration.3,4 The degree of noncompliance in other symptom subsets is as it undefined.

A total of 3144 CVD patients were referred to our clinic over an 8-year period from 1998-2006 for evaluation and treatment. As a tertiary referral center for CVD, patients had been under the care of other physicians for a variable time prior to referral. A compression history detailing prior use was part of the initial evaluation. Data was entered into an electronic medical record and later analyzed. Nonparametric Wilcoxon’s signed-rank test for unpaired data and chi-square tests were used as appropriate in statistical analysis.

Only 37% of the patients reported using compression; 21% on a daily basis and 16% less often (Figure 1). Sixtythree percent did not use stockings, or had abandoned their use after trying them for a period of time in the past. The reasons for nonuse are shown in Table I. Use of stockings was poor and similar in both men and women (39% vs 38%, p=ns). There was no difference among the various decile age groups in the use of compression stockings (Figure 2). Severity of symptoms did not encourage greater stocking use; nonuse was similar in all symptom groups (Figure 3) and only a minority used stockings. There was no difference between the various CEAP classes in the low stocking usage (Figure 4). 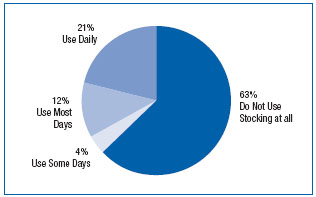 Figure 1. Use of stockings among 3144 patients with chronic venous disease. Nearly two-thirds of patients did not use stockings. Only 21% were using them on a daily basis. 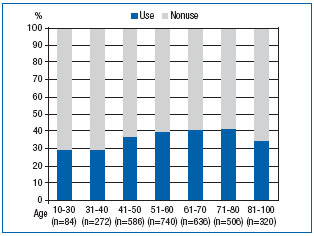 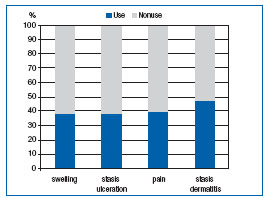 Figure 3. Stocking use was poor in spite of significant symptoms. There was no difference in stocking use among the various subsets (P=ns). 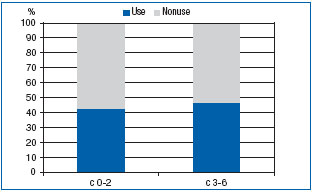 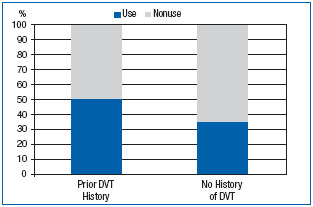 Figure 5. Use of stockings related to prior history of deep vein thrombosis. Patients with a history tended to use stockings somewhat more than others (P<0.0001), though half (50%) were still not using stockings. 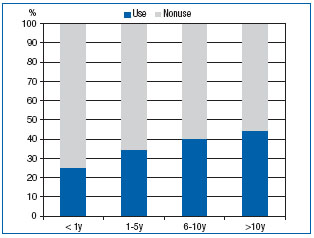 Patients who had a history of deep venous thrombosis tended to use stockings relatively more (50% vs 35%, P<0.0001) than patients without such history, yet half the patients in the former group were still not using stockings (Figure 5). Longer duration of symptoms also seemed to result in slightly increased use (Figure 6), within the context of overall very low usage.

Compression has been used since antiquity to control CVI symptoms. Despite its acknowledged efficacy, its use among patients remains poor. Only a minority of CVI patients use it. Nonuse is widespread, among both sexes, all age groups, and symptom subsets and CEAP classes. Longer duration of symptoms and a history of deep venous thrombosis tend to increase stocking usage somewhat, yet half or even more of these subsets were still not utilizing compression stockings. Examining the reasons for such low usage, three broad categories emerge: (1) those who are not candidates for compression, (2) those in whom it is ineffective, and (3) others who were unwilling to use compression stockings. The last group can be termed as noncompliant patients. Noncompliance was either due to (a) complaints related to the physical properties of the stockings, such as fit and wear, or (b) because of attitudinal reasons that were often unstated.

The primary physician had not recommended or prescribed stockings in 25% of patients in this series (Table I). In most such cases, the reasons for not prescribing stockings appeared valid: the local condition of the limb (fragile skin, blisters, massive edema, soreness of the limb on touch, contact dermatitis, irregular limb shape from obesity folds etc.) or the general condition of the patient (old age, frailty, massive obesity, arthritis of the hand, etc) precluded effective usage. Not all patients are candidates for compression therapy. 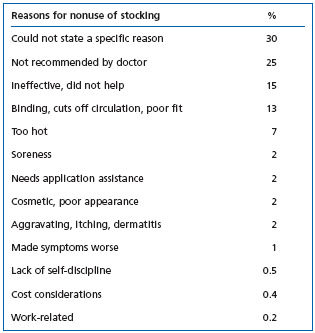 Table I: Reasons stated by patients for nonuse of compression stockings. n=3144

Stockings are not effective in some patients; 37% of patients in this series were compliant (21% used them daily), yet were referred to our clinic because of persistent symptoms. Sixteen percent in this series abandoned stockings after trial because they did not help or made their symptoms worse.

Others can use compression stockings but are noncompliant with prescribed compression for a variety of reasons. Seven percent of patients in this series blamed the hot weather for nonusage. This is probably a minor factor worldwide as overall noncompliance is similarly high in hot as well as cold climates.5.6 Noncompliance was due to physical reasons related to the stockings (tightness, binding, “cutting off circulation”, etc) in 24% of patients in this series. Another 30% of the patients in this series could not state a specific physical reason for noncompliance. These patients are unwilling to tolerate the intangible sense of restriction imposed by daily stocking wear. There is probably considerable overlap between these two groups. In either case, the central factor behind noncompliance appears to be to the pressure exerted by the compression stockings themselves— precisely the property that underpins efficacy in controlling symptoms. The high degree of noncompliance even in high CEAP classes and symptomatic subsets suggests that many patients consider compression stockings a quality of life issue in and of itself and are willing to forego its use at the cost of persistent symptoms. In a randomized trial comparing two brands of support stockings, in ulcer patients, similar statistics of nonuse as in current study were reported: 11% were not candidates for compression stockings,7 it was ineffective in 26% with ulcer recurrence, 30% to 41% had difficulty using stockings related to wear and use, and 16-19% were noncompliant. Noncompliance ranged between 22% and 67% in other studies.3,5,8

Noncompliance is a serious issue as it is a major cause of recurrence in CVI.7,8 Some authorities have suggested that poor patient education and inadequate doctor-patient communication may lie at the heart of the high noncompliance rate. However, noncompliance is high among closely monitored patients even under direct physician supervision3,5,8 for advanced manifestations of CVD. And patients continue to be noncompliant despite severity of symptoms, as shown in the current study. This suggests that some patients will continue to be noncompliant regardless, because of physical or “lifestyle” restriction imposed by the required daily regimen of compression wear. Further patient education is unlikely to be of benefit in this subset.

The high degree of nonuse and noncompliance also affects data reporting in significant ways. Stocking results are typically reported only in those who use the device and become compliant; noncompliant patients are seldom included in the reported results distorting the “intent to treat” standard currently required in reporting treatment results and outcome comparisons.