Current management of superficial thrombophlebitis of the lower limb

The incidence of superficial thrombophlebitis (STP) in the general population ranges from 3% to 11%,1-5 although this is considered to be an underestimate as only the more symptomatic cases seek medical attention. The mean age at STP presentation is 60 years3,6-12 and the older the patient is the fewer the risk factors required for its development.11,13 STP is more common (50%-70%) in women and prevalence increases with age.3,6,7,11,12,14-21

The development of STP in the absence of varicose veins is relatively rare (5%-10% of all cases)11,12,33 and various conditions have been implicated in its etiology including autoimmune disease (Behcet’s, Buerger’s, and Mondor’s disease),5,6,16 malignancy,5,6,16,25,34-36 thrombophilia,4-6,8,16,17,26,37-45 mechanical or chemical trauma or injury (venous infusion, catheter introduction),16 radiation injury,16 and bacterial or fungal infections.16 Risk factors are the same as those for the development of deep vein thrombosis (DVT)17,27 and include a history of thrombotic events,46-48 pregnancy,49,50 use of oral contraceptives and hormone replacement therapy, immobilization,18,29,30,31,51 obesity, recent surgery18,52 and trauma,18,51 and sclerotherapy.53,54

As STP may coexist with DVT in 6%-53% of patients presenting with STP5,9,11,14,15,19,23,55-66 it is important to perform a duplex scan to exclude DVT and to confirm the presence of STP and its extent. Thrombus extension from the superficial system into the deep veins may occur through the saphenofemoral and saphenopopliteal junctions and the perforating veins (Figure 1). Extension from the greater saphenous vein (GSV), particularly when the above knee segment is involved, into the femoral vein is the most common scenario23 and occurs in 17%-19% of cases. When STP affects the below knee segment of the GSV (Figure 2) an association with DVT has been reported in only 4-5% of cases.10,27,57 It should be noted that STP may be a risk factor for the development and recurrence of DVT.3,5,11,22,67,68 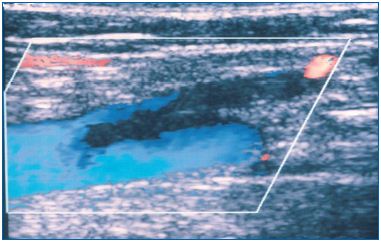 <
Figure 1. Thrombus in the greater saphenous vein extending to
the common femoral vein through the saphenofemoral junction. 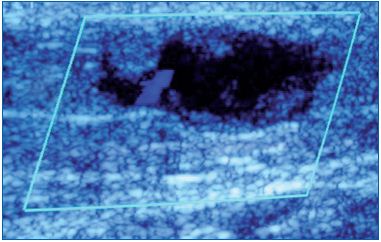 Figure 2. Thrombosed varicosity in the calf.

STP may develop during pregnancy, but because the prevalence is very low (0.05-0.1%) it is unclear whether there is any etiological link.3,17,49,50,71-73 However, the problem may be underestimated as the published literature only includes symptomatic patients.49,50

The typical clinical presentation of STP includes local pain, warmth, erythema, and swelling, with the superficial vein becoming solid like a cord.3,6,33,74 It is important to reiterate here the value of Duplex ultrasound for the confirmation of STP, estimation of thrombus extent (Figures 3 and 4), exclusion of DVT and for follow-up.5,6,9,10,20,23,35,55,58-63,75 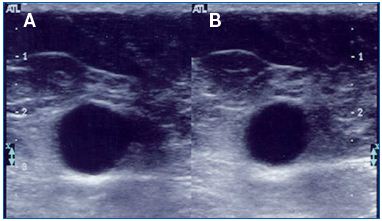 Figure 3. Thrombosed greater saphenous trunk at the thigh:
A. without compression, B. with compression. The vein is
incompressible and dilated containing echolucent material (fresh
thrombus). 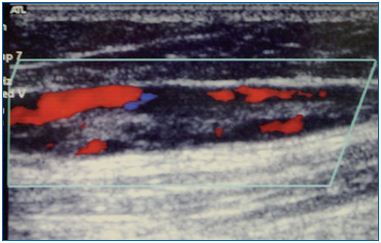 Figure 4. Greater saphenous vein with an old thrombus as
characterized by the presence of recanalization and echogenic
material inside its lumen.

The treatment of STP varies greatly in clinical practice. Among 634 patients in the POST study, a prospective epidemiologic study conducted in France, treatments included anticoagulation in therapeutic or prophylactic doses, vitamin K antagonists, elastic stockings, topical or oral use of nonsteroidal anti-inflammatory drugs (NSAIDs) and surgery.11

In a randomized study of 562 patients, unfractionated heparin, low-molecular-weight heparin (LMWH) and vitamin K antagonists were found to have equal efficacy and were superior to elastic compression or flush ligation combined with elastic compression in terms of STP extension at 3 months.16

A randomized, double-blind trial of 427 patients52 that compared LMWH (enoxaparin 40 mg and 1.5 mg/ kg) with an NSAID (tenoxicam) or elastic stockings alone for 10 days showed that the prophylactic dose of LMWH (enoxaparin 40 mg) was the most effective treatment. Similar findings were reported in another open randomized trial involving 117 patients.76

The use of high doses of unfractionated heparin twice daily seems to be superior to prophylactic doses, but is inferior to LMWH in prophylactic or therapeutic doses.77-79 A systematic review has shown that both LMWH and NSAIDs significantly reduced the incidence of extension or recurrence of STP by approximately 70% compared with placebo, and both had similar efficacy and safety.80

The CALISTO trial was an international, randomized, double-blind, placebo-controlled trial of 3,002 patients12 that compared subcutaneous fondaparinux 2.5 mg once daily for 45 days with placebo. Participants included hospitalized or nonhospitalized patients 18 years or older, with acute, symptomatic lower limb STP, at least 5 cm long, as confirmed by compression ultrasonography. Exclusion criteria were an interval between the onset of symptoms and planned randomization of more than 3 weeks; treatment for cancer within the previous 6 months; presence of symptomatic or asymptomatic DVT; symptomatic documented pulmonary embolism; STP associated with sclerotherapy or placement of an intravenous catheter; STP located within 3 cm of the saphenofemoral junction; and DVT or pulmonary embolism within the previous 6 months. Patients were also excluded if they had received an antithrombotic agent (other than aspirin at a dose of ≤325 mg per day) for more than 48 hours or a NSAID for more than 72 hours as treatment for the current episode; if in the investigator’s opinion a saphenofemoral junction ligation was required; if they had had major surgery within the previous 3 months; if there were conditions that could confer predisposition to bleeding including creatinin clearance <30 ml/min, platelet count <100,000/mm3; and any women that were pregnant.

The primary efficacy outcome (a composite of death from any cause or symptomatic pulmonary embolism, symptomatic DVT, or symptomatic extension to the saphenofemoral junction or symptomatic recurrence of superficial vein thrombosis at day 47) occurred in 0.9% of patients in the fondaparinux group and 5.9% in the placebo group (P<0.001). The rate of pulmonary embolism or DVT was 85% lower in the fondaparinux group. Similar risk reductions were observed at day 77. No difference was observed in major bleeding between the two groups. However, several concerns were expressed in relation to this trial, especially when applying such treatment to any STP, because of the high cost of the therapy.81

Surgical treatment combined with elastic stockings is associated with a lower rate of venous thromboembolism and progression of STP compared with elastic stockings alone.80 Another review in which surgical therapy was compared with anticoagulation therapy showed similar rates of STP progression, but the incidence of venous thromboembolism and complications were higher with surgery.82 In another study, no difference was observed between surgery and 4 weeks of enoxaparin therapy.83

The role of antibiotics is of no benefit in the management of STP33,84 unless the cause of thrombosis is secondary to an indwelling intravenous catheter.

Hirudoids and some topical agents (piroxicam cream, piroxicam patch) improve local symptoms, alleviating pain and local inflammatory signs, but there is no information on progression to DVT.80,85-87 Local application of heparin was reported to have effects on symptoms comparable to LMWH.88 If tolerated, elastic stockings are traditionally used as an adjunctive treatment together with anticoagulation6,16,33,52,89

In summary, all patients with STP should have bilateral duplex scanning to exclude DVT. As far as treatment is concerned, LMWH in intermediate doses for at least 1 month or fondaparinux 2.5 mg daily for at least 4 weeks are effective therapies. Surgery is no more effective than LMWH, but when the thrombus is close to the saphenofemoral or saphenopopliteal junctions, both are acceptable options depending on the patient’s characteristics and the treating physician’s preference. For isolated STP at the below knee segment confined to varicosities, local application of heparinoids, NSAIDs and elastic stockings form an acceptable treatment option.