Visceral venous aneurysms are considered rare clinical entities with not variable pathogenesis, clinical presentation, natural history, and management. In an electronic search of the pertinent English and French literature, ninety-three reports were identified, including 176 patients with 198 visceral venous aneurysms. Patients’ ages ranged from 0 to 87 years, and there was no apparent male/female preponderance. The commonest location was the portal venous system (87 of 93 reports, 170 of 176 patients, 191 of 198 aneurysms). Portal system venous aneurysms were present with abdominal pain (44.7%), gastrointestinal bleeding (7.3%), or were asymptomatic (38.2%). Portal hypertension was present in 30.8% and liver cirrhosis in 28.3%. Thrombosis and rupture occurred in 13.6% and in 2.2%, respectively. Adjacent organ (common bile duct, duodenum, inferior vena cava) compression was reported in 2.2% The management ranged from watchful waiting to intervention. Indication for operation was symptoms and complications. In 94% of the cases, aneurysm diameter remained stable with no complications during follow-up. Aneurysms of the renal veins and inferior mesenteric vein were also reported. Of six cases of renal vein aneurysm, three were treated surgically and the remaining three were asymptomatic.

Venous aneurysms are reported in the popliteal, jugular, and saphenous veins, but rarely occur in other veins. Visceral venous aneurysms have been increasingly described in recent years probably because of the increasing availability of advanced radiologic imaging in clinical practice. Their prevalence, clinical presentation, and complications have not been adequately reviewed. Most visceral aneurysms are reported in the form of case reports, and there are few published case series that specifically address indications for surgery and optimal surgical techniques. 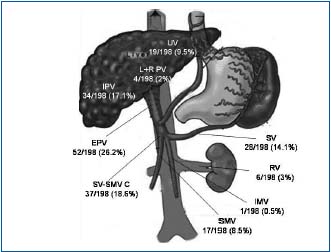 There are two main theories regarding the etiology of portal vein aneurysms: congenital and acquired. During embryonic development, three anastomoses form between right and left vitelline veins around the future duodenum. A complex process of involution and interconnection of these vitelline veins results in the portal vein. Abnormal development of the portal venous system during this critical period may give rise to an extrahepatic portal vein aneurysm.95 Incomplete regression of the distal right primitive vitelline vein,46,95,96 or a variant branching pattern of the portal vein54 may later form a portal vein aneurysm. Incomplete regression of the distal right vitelline vein leads to a diverticulum that would develop into an aneurysm in the proximal superior mesenteric vein.95 Portal vein anomalies including the right anterior segmental portal vein or the right anterior and posterior segmental portal veins originating from the umbilical portion of the portal vein, and a rightward deviation of the umbilical portion of the portal vein, are associated with aneurysms of the umbilical portion of the left portal vein.54 An inherent weakness of the vessel wall is another potential explanation of a congenital origin. The congenital theory implies a developmental defect of the vein wall as the main cause of aneurysm development. Congenitally or developmentally defective segments may give rise to an aneurysm.47 The congenital theory is based on the presence of aneurysms in children and young adults without portal hypertension.4,5,10,17,33,35 In utero diagnosis of a portal vein aneurysm is evidence in support of the congenital theory.34 The acquired lesions are secondary to chronic liver disease, mainly cirrhosis, portal hypertension, trauma, and pancreatitis.14,42,44,46,81,94 Data regarding these possible etiological factors are available for 162 patients. Portal hypertension was reported in 30.8% (50/162) and liver cirrhosis in 28.3% (46/162) of the patients. Thrombophilia was recently suggested to be an etiologic factor of portal aneurysms. Recurrent thrombosis can cause portal vein occlusion, which results in acute or chronic symptoms of portal hypertension and aneurysm formation.81

The clinical importance of a portal vein aneurysm is related to its size. A small aneurysm usually does not produce symptoms, while large ones are described as the cause of duodenal compression,43,80 inferior vena cava compression,43 biliary tract obstruction,33 and portal vein thrombosis.1,5,19,24,31,46,55,57,61,62,66,74,75,77,81 Data regarding clinical presentation are available for 123 patients. Abdominal pain was reported in 44.7% (55/123) and gastrointestinal bleeding in 7.3% (9/123) of the patients. The aneurysm was asymptomatic and discovered incidentally during abdominal scanning, usually abdominal CT scan and abdominal ultrasound, in 38.2% of the patients (47/123). Other symptoms such as fever, abdominal distension, nausea, loss of appetite, weight loss, vomit, malaise, and jaundice were infrequently reported.

Congenital portal venous aneurysms are generally considered stable lesions and regular follow-up is usually sufficient. Acquired portal venous aneurysms, mainly when they are combined with liver cirrhosis and portal hypertension, can have a more unpredictable clinical course and require closer follow-up, and intervention when complications occur.9 Portal venous system aneurysms require no treatment in most cases. Serial follow-up of patients with abdominal ultrasound is usually sufficient.46,81 In 88% of the patients who were followed up, aneurysm diameter remained stable and no complications occurred. Portal vein thrombosis may necessitate anticoagulation therapy or percutaneous intervention with thrombectomy or thrombolysis.81

Reported complications of untreated visceral venous aneurysms are thrombosis, rupture, and compression of adjacent structures. Complete thrombosis occurred in 24 patients (13.6%) and nonocclusive thrombus in six patients. Rupture was described in four patients (2.2%), one of them during the postpartum period. Two of these four ruptures were splenic vein aneurysms, one intrahepatic and one aneurysm of the right portal vein. Ruptured aneurysm diameter was 2 cm in three of the four cases. The aneurysm compressed the common bile duct in two cases, the duodenum in two cases, and the inferior vena cava in one case.

The type of the procedure is based on the location and size of the aneurysm, the presence of complications, and the comorbidities (portal hypertension and liver cirrhosis). Aneurysmorraphy is the easiest procedure for excision of the aneurysm, mainly when it is saccular, and restores normal luminal diameter of the portal vein. In cases of fusiform aneurysms, if an aneurysmectomy is performed, the conduit used to replace the portal vein can be an allograft from a cadaveric donor, or a synthetic graft.80 The location of the aneurysm is significant for the choice of the procedure. The location was determined in 30 of the 34 operated patients: in 29 it was the extrahepatic portal system. In 4 of them the aneurysm was located in the splenic vein. All patients underwent splenectomy, combined with distal pancreatectomy in three cases.49,59,79,86 Two of the four patients with superior mesenteric vein aneurysm underwent aneurysmorraphy, one aneurysmectomy, and one arterial thrombolysis and transhepatic thrombus aspiration.19,20,41,66 Patients operated for an aneurysm of the extrahepatic main portal vein or superior mesenteric-splenic vein confluence underwent various procedures, most frequently aneurysmorrhaphy.1,31,43,55,58,69,77,80 A single patient with intrahepatic portal aneurysm was operated: he had documented portal hypertension and underwent splenectomy.57 Several patients with documented portal hypertension underwent surgical shunt procedures, alone4,5 or combined with various other procedures.3,24,76,77 These shunt procedures are performed to decompress portal hypertension and do not specifically treat the venous aneurysm. Patients with liver cirrhosis present increased perioperative risk and two out of the five who underwent surgery died during follow-up. Because of the low reported rate of rupture and the risk of surgery in the presence of portal hypertension and liver cirrhosis, there is no strong evidence that prophylactic resection of the portal vein aneurysm is beneficial in these patients.80

Nine patients with portal venous aneurysm died during follow-up, resulting in 10.3% mortality. Three of them presented with complications; rupture or thrombosis. Five of these nine patients were operated, two underwent liver transplantation because of liver cirrhosis, and two had a coexisting malignancy.

Renal vein aneurysms are very rare, with only six cases reported in the English-language literature.88-93 Patient ages ranged from 33-73 years. Five patients were male and three presented with abdominal pain. The remaining three aneurysms were discovered incidentally or during laparotomy.93 Aneurysm diameter ranged from 4 to 5.5 cm. The aneurysm was located in the left renal vein in four cases. The left renal vein is considered to be affected more often by aneurysm formation because of its more complicated embryologic development.88 Renal vein aneurysms must be differentiated from a distended left renal vein, which is recognized as a normal variant.

The nutcracker phenomenon is attributed to compression of the left renal vein as it courses between the superior mesenteric artery anteriorly and the aorta posteriorly.97 Renal vein aneurysms should also be differentiated from idiopathic renal vein varices, especially solitary ones. Renal vein varices are usually smaller than aneurysms and typically are accompanied by a dilated venous network adjacent to the renal pelvis and upper ureter.98 Because of the small number of renal vein aneurysms reported, there are insufficient data regarding optimal treatment. Three of the six patients were treated surgically, two underwent renal vein reconstruction, and one nephrectomy.89,92,93

A summary of types of treatments of patients with visceral venous aneurysms is displayed in Figure 2. 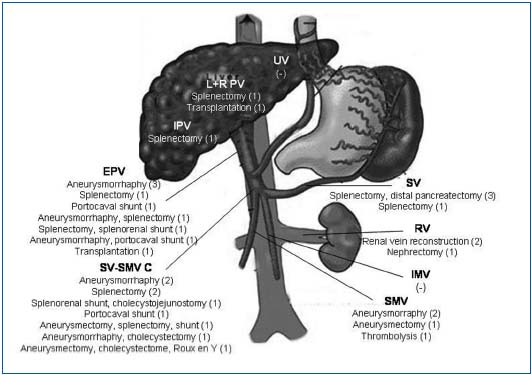 Visceral venous aneurysms may not be as uncommon as previously thought and their most frequent location is the portal system. They are often associated with cirrhosis and portal hypertension and their presentation includes abdominal pain and other nonspecific symptoms, or they are discovered incidentally. Watchful waiting is an appropriate treatment, except when complications occur. Most common complications include thrombosis and rupture.