Chronic leg ulcers (CLU) affect 0.5% to 1% of the general population, and results of several studies indicated that a high number of CLUs will have a prolonged healing, despite the best medical practices.1 CLU-associated malignancies include 2 distinct entities: malignant transformations of long lasting CLU and primary ulcerating skin carcinomas misdiagnosed as CLU.

Malignant transformation of CLU into a squamous cell carcinoma (SCC) (Figures 1 and 2) has been well known for more than a century, although it is often under recognized. In the literature, SCCs that arise from CLUs or scars are referred to as Marjolin’s ulcers, after the first description by the French physician named Jean-Nicolas Marjolin in 1827. One of the key clues for the diagnosis of Marjolin’s ulcer is the prolonged duration (≥10 to 15 years) of a preexisting wound in well documented cases.2 Skin cancers may also arise de novo and mimic the appearance of CLU in appearance (Figures 3 and 4). In the absence of previous negative histology, to diagnose a malignant CLU transformation and to exclude the possibility that a primary cutaneous carcinoma is mimicking a CLU, the CLU must be present for at least 3 years.2 However, very few studies distinguish between these two possibilities. 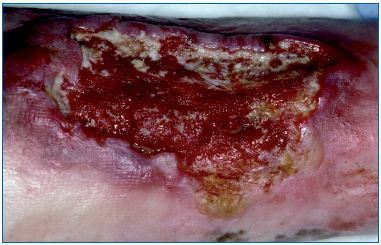 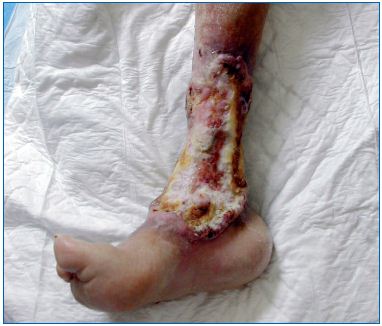 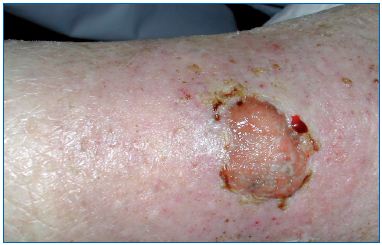 Figure 3. Basal cell carcinoma mimicking a chronic leg
ulcer. Note the excessive granulation tissue in the center of
the wound. 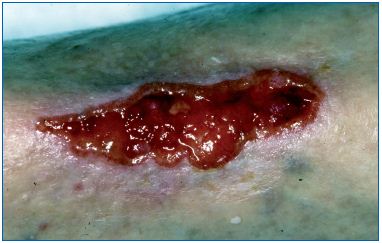 Primary cutaneous malignancies, when located on the leg, may ulcerate and be misdiagnosed as CLU. The most frequent cutaneous malignancies are basal cell carcinomas (BCCs), SCCs, and melanomas and arise mainly on areas exposed to the sun. Moreover, BCCs and SCCs mostly affect people over the age of 60 when venous insufficiency and/or peripheral arterial disease are also frequent.3 The average incidence of skin carcinomas is increasing around the world and is estimated to be between 75 and 100/100 000 person years for BCC, 23 to 33/100 000 person-years for SCC, and 5 to 20/100 000 person-years for melanoma in Europe.4

Other skin malignancies, although less frequent, may arise on legs and then rapidly ulcerate. Classic Kaposi’s sarcoma (Figure 5) follows an indolent course, and patients present with plaques and nodules on the lower extremities, which frequently ulcerate. Primary cutaneous B-cell lymphoma, leg type, belongs to a distinct group of B-cell lymphoproliferative disorders defined by its clinical presentation as red to bluish nodules or tumors, and location, on one or both lower legs. Some primary cutaneous T-cell lymphoma may have an aggressive behavior and become early necrotic and ulcerated (Figure 6). 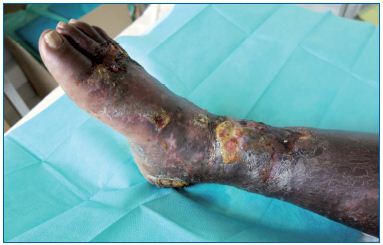 Figure 5. Ulcerated Kaposi sarcoma on the leg of an
immunosuppressed patient (renal transplantation). Note
the leg lymphedema related to the extension of the Kaposi
sarcoma. 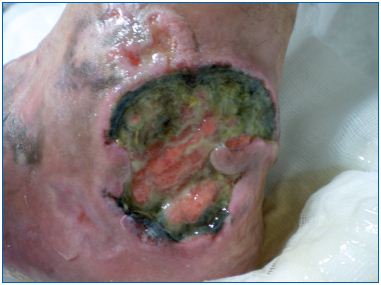 Clinical appearances of CLU-associated skin cancers (including primary ulcerating carcinomas misdiagnosed as CLU and malignant CLU transformations) range from innocuous lesions to overtly exophytic growths. Thus, guidelines recommend taking a biopsy of any atypical CLU for differential diagnoses,5 or in the case of an atypical clinical progression.6

The relative risk of SCC in CLU, as compared with the risk of developing SCC on the lower limbs for a normal population, has been estimated to be 5.8 based on two epidemiological studies from Sweden.7,8 In an important study, 10 913 patients with venous leg ulcers, identified from the Swedish Inpatient Registry, were matched with registrations of lower limb SCC recorded by the Swedish Cancer Registry whereby. 17 SCC cases were considered to have occurred secondarily to venous leg ulcers. The median duration of the ulcer before the diagnosis of cancer was 25.4 years, which is very concordant with cases reported in the literature. Ulcers with duration shorter than 3 years were not considered. A retrospective study of all the CLU biopsies performed in a specialist wound clinic located in Great Britain identified 4 carcinomas out of 17 biopsies (24%) that were performed for suspicious clinical features (exophytic growth, irregular base or margin), 9 carcinomas out of 24 biopsies (37.5%) performed because of nonhealing ulcer without carcinoma features, and 0 carcinomas out of 35 biopsies performed for inflammatory features.9

In an Australian study, the frequency of carcinomas associated with CLU was 2.2% for leg ulcers. Biopsies were systematically performed in cases of nonhealing CLUs despite appropriate treatments or in cases where suspicious features suggested a possible malignancy.10 This prevalence of malignancies was very high because, in contrast with the Swedish studies, primary ulcerated skin cancers misdiagnosed as CLU were considered. Therefore, it is not surprising that this study found more BCCs than SCCs (75% versus 25%), which is the same proportion of whole body surface BCCs and SCCs in Australia, where the skin cancer rate is the highest in the world.

In a recent prospective study, we prospectively determined the frequency of skin cancers associated with CLU, presumed to be of vascular origin and failing to heal despite ≥3 months of appropriate therapy. The overall skin-cancer frequency among 154 CLUs was 10.4%: 9 SCC, 5 BCC, 1 melanoma, and 1 leiomyosarcoma. Taking into account the wound duration, 43% of the cancers were long lasting (>5 years) and were highly suspected of being malignant transformation of CLUs, and 19% had lasted for <5 years and were highly suspected of being ulcerated cancers misdiagnosed as CLUs. In 38%, it was not possible to definitively decide between CLU malignant transformation and ulcerated cancer misdiagnosed as CLU.11

Malignant transformations of CLU occurs mainly toward SCCs (>75% of the cases), usually in a well-differentiated form or in verrucous type, which may be difficult to distinguish from benign pseudoepitheliomatous hyperplasia (PEH).12-14 Verrucous carcinoma is a low grade SCC variant that is locally invasive, well differentiated, and has a low metastatic potential. Tumors have a warty appearance and are locally aggressive. A superficial biopsy is usually not sufficient to distinguish these tumors from verruca vulgaris or PEH. PEH is a reactive epithelial proliferation characterized by a prominent and irregular hyperplasia of the epithelium, which closely simulates a SCC. PEH may be present in a number of conditions characterized by prolonged inflammation and/or chronic infection, as well as in association with many cutaneous neoplasms. Therefore, repeated biopsies or histological examination on the complete excision of the wound may be necessary to distinguish between PEH and a well-differentiated SCC, in the case of high clinical suspicion of malignancy. Nevertheless, histology may also find poorly or moderately differentiated SCC that are probably more aggressive.15

Few cases of sarcomas, lymphomas, or melanomas have been documented in CLU biopsies, despite arising quickly after onset of CLUs. In these cases, the tumors were the cause of the ulceration being misdiagnosed as a CLU, rather than a complication of a chronic CLU.

In a recent prospective study11 of CLUs that failed to improve despite 3 months of adequate treatment, abnormal excessive tissue granulation at the wound edges appeared to be highly sensitive parameters for positive diagnosis of CLU-associated malignancies. However, high clinical suspicion of CLU transformation, high clinical suspicion of ulcerated skin cancer, and abnormal bleeding were highly specific parameters.

In a retrospective study of 85 malignancies arising in CLUs, 76% of them were biopsied because of abnormal granulation or overt tumor growth of the wounds, and 20% because of a protracted course or spreading of the CLU despite appropriate treatment. Only 5% were biopsied because of abnormal pain or bleeding.13 For malignant transformation of CLU, mean age of the patients was around 75 years, with a logical female predominance, related to the age of the population and venous disease. Mean ulcer duration was identical in all retrospective studies, around 25 years, with a range between 7 and 51 years.7,12,13,15,20 Carcinomas may arise in open wounds, but also at the site of remitting/ relapsing ulcers. Ninety percent of the ulcers were from venous origin or from mixed origin with a venous predominance.13 Exophytic irregular growth of the wound edges and/or bed, excess tissue granulation that extends beyond the margins, increase in pain or bleeding, absence of healing despite adequate treatment, and unusual extension have been reported as clinical features of malignant transformation.12,13 Several biopsies of both the margins and the wound bed may be required to obtain a definitive diagnosis, and may be repeated if clinical suspicion is high.11 The poor prognosis of malignant transformation of CLU is, at least, partly related to the delay in diagnosis, which is made at the metastatic stage in 30% to 34% of cases.7,12 Magnetic resonance imaging seems to be the most valuable study in these patients to evaluate the bone and surrounding tissue extension.20 More recently, 2-deoxy-2- [fluorine-18]fluoro-D-glucose integrated with computed tomography (18F-FDG PET/CT) seems to be useful in differentiating Marjolin’s ulcers from benign inflammatory conditions and in the evaluation of the invasion depth; however, these preliminary results remain to be confirmed.21

Primary skin carcinomas mimicking a CLU, usually presents clinically as a single ulceration with indurated or pigmented edges. For BCC, the ulceration frequently has well-defined borders, with a “pearly” appearance of the edges (Figure 4). For melanoma, dark pigmentation may be present on the edges and spreads to the perilesional skin. In the case of Kaposi’s sarcoma, several dark blue macules are present on the same leg, or more frequently, on both legs that progress to plaques and tumors with lesions of different ages (Figure 5).

SCCs arising in CLUs have been shown to be more aggressive and metastasize more frequently than those arising on the limbs de novo, probably because of a delay in diagnosis. A median survival of 1 year has been reported in the Baldursson’s study.15 In a French retrospective study,13 the death rate increased from 25% to 70 % in the case of lymph node involvement and to 83% if visceral metastasis was present, with an overall death rate of 37.2%; leg amputation was performed in 57% of the cases.

All SCCs arising in CLUs may benefit from a multidisciplinary approach for treatment.22 Surgery is the treatment of choice and leg amputation is often considered. Although, in cases of a well-differentiated tumor without bone involvement, excision with a large margin for high risk SCCs (at least 6 to 10 mm) seems to be an appropriate treatment.12-14,20 Radiation treatment should probably not be considered, even as a palliative treatment, as it inhibits wound healing without curing the tumor.13,14 Lymph node dissection is not performed in absence of nodal involvement.22

For BCCs and melanomas, surgical excision is the first line of treatment. BCCs have a potential of local invasion, but metastasize exceptionally. Excision margins are usually between 5 and 10 mm in this localization.23 Melanomas have the presence of an ulceration the results in upstaging by one substage compared with a nonulcerative melanoma. The excision margins, adjuvant treatment, and sentinel lymph node staging are decided according to Breslow thickness within a multidisciplinary team including surgeons, oncologists, dermatologists, and histologists because of a high risk of recurrence and metastases;.3

Taking into account the frequency of cutaneous malignancies associated with CLU; CLU presumed to be of vascular origin should be biopsied after 3 months of adequate treatment, as it seems to be a reasonable threshold in our practice and in the literature, to evaluate the response to treatment. Some authors recommend performing biopsies for all ulcers without evidence of healing after 2 weeks of standard treatment, although recent guidelines recommend taking a biopsy after 6 weeks to 3 months of nonhealing wounds. One of the limitations to performing a biopsies may be related to the clinician’s fear of making the wound worse. However, it was recently shown that wound biopsies are a safe procedure, do not worsen the CLU healing process, and that the biopsy sites healed within a few weeks.24