Hemorrhoidal illness represents one of the most common medical conditions in man. The most recent statistics indicate a prevalence of about 25% in the adult population, and higher than 50% for those older than 50. However, the prevalence and incidence are most probably higher, considering the fact that, in certain patients, the illness begins in an asymptomatic fashion.
The origin of hemorrhoidal disease can be either mechanical or vascular (hemodynamic):
According to mechanical theory, the supportive structure of the hemorrhoidal plexus undergoes spontaneous involution which includes excessive laxity and leads to displacement of the internal hemorrhoids. Acute intrarectal or abdominal pressure are worsening factors.
Vascular factors are increasingly recognized as playing an important role in the development of hemorrhoidal disease through alterations of the vascular plexuses and dysfunction of the arteriovenous shunts, the effect of which are amplified, as above, by increased abdominal pressure.
Hemorrhoidal disease is often associated with inflammation. Therefore, the treatment of hemorrhoids has to achieve three objectives: to eliminate mechanical and local triggering factors, to reduce the inflammation, always present in acute manifestations and to reestablish optimal hemodynamic and microcirculatory conditions.

Eliminate mechanical and local triggering factors
To achieve the first objective it is necessary to observe certain lifestyle and dietary measures, which represent the basis of the treatment.
The dietary regime, above all, must include fiber-rich food and abundant liquids in order to ensure the regularity of the alvus and to maintain a soft consistency of the stools.
Mechanical laxatives, such as vaseline or liquid paraffin, can be utilized to this end, as well as avoiding consumption of stimulating drinks (tea, coffee), alcohol, and spices. Great care should be paid to personal hygiene and daily habits, avoiding smoking, a sedentary lifestyle, and a sitting position for prolonged periods of time.
There is doubt about the role of local treatment, which can be carried out through agents employed in various combinations: local anesthetics, anti-inflammatory drugs, lubricating substances, and substances with local venous tropism.
All these medicines have a favorable effect on clinical phenomenology, even if, up to now, studies have called into doubt their real effectiveness.

Reduce the inflammation
The second objective to achieve in the treatment of hemorrhoidal attacks is prevention of the inflammation. It has been demonstrated that metabolites of arachidonic acid (in particular prostaglandin and leukotrienes) levels are higher in the acute phase.1
Therefore, it is necessary to administer, in acute hemorrhoidal disease, substances able to antagonize the actions of the chemical mediators of the inflammation, including the kinins and the lymphokines, and to inhibit enzymatic activation of arachidonic acid.

Reestablish optimal hemodynamic and microcirculatory conditions
Hemodynamic and microcirculatory disorders lead to inflammation of the tissues and decrease of venous tone. The main inflammatory mediators involved are PGE-2 and TXA-2, whose levels are higher during attacks. The clinical manifestations of these disorders are pain and bleeding, which are very disabling in the patient’s9 daily life. The third objective consists therefore in opposing the PGE-2 and TXA-2 synthesis.

Daflon 500 mg IN THE TREATMENT OF HEMORRHOIDS

Daflon 500 mg seems to offer a comprehensive pharmacological answer to all the needs of hemorrhoid treatment. Firstly, the flavonoids, including Daflon 500 mg, have been demonstrated to restain lysosome enzymes and interfere with enzymes involved in the flow of arachidonic acid, which causes inflammation.2
Daflon 500 mg has also demonstrated an antioxidant activity, which allows it to oppose free radicals,3 as well as a decreasing effect on the synthesis of PGE-2 and TXA-2 by the macrophage.4
All these effects result in a reduction of the pericapillar permeability,5 and an increase in the capillary resistance to blood extravasation in the interstitium.
The hemodynamic effect manifests itself through an increase in venous tone demonstrated both experimentally6 and clinically.7
Regarding clinical benefits, two recent studies have demonstrated the outstanding efficacy of Daflon 500 mg, both in acute and recurrent attacks.

All symptoms are significantly improved from the second day of treatment.
A double-blind, placebo-controlled study was performed in 100 patients suffering from hemorrhoidal disease confirmed by proctoscopy, presenting an acute hemorrhoidal attack of up to 3 days, which had not been treated. The treatment lasted 7 days at the dosage of 6 tablets for 4 days and 4 tablets for 3 days.
A clinical examination was performed at D0 and D7, with an assessment of the symptoms and their improvement using a 4-point scale.
The results of this study demonstrated an overall improvement of the symptoms significantly higher in patients treated with Daflon 500 mg in comparison with the controls (P<0.001), which was already evident on the second day of treatment, but more marked at the end. The scores used to evaluate bleeding, pain, and itching resulted in a reduction in both groups on D7, but to a notably greater degree in patients treated with Daflon 500 mg (P<0.001); analogous results were observed regarding tenesmus, with a less relevant resolution percentage (Figure 1) and the objective clinical signs (proctitis). Also, the duration and intensity of the present crisis, compared with previously, were much more reduced in patients treated with flavonoids compared with the placebo group (P<0.001) (Figure 2). 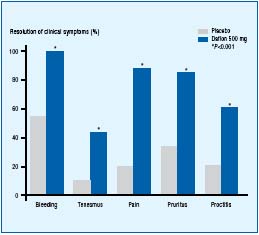 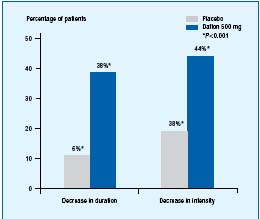 Patients themselves experienced a significant improvment from the second day of treatment with Daflon 500 mg.
In Prof Misra’s study, patients evaluated the efficacy of Daflon 500 mg on their quality of life during acute attacks, using a self-evaluation scale.
They therefore evaluated the drug’s efficacy on different signs and symptoms occurring during acute attacks such as pain, pruritus, proctitis, and bleeding, as well as general improvement.
Indeed, 100 patients took either Daflon 500 mg during their acute attacks at the dosage of 6 tablets per day for the first 4 days, followed by 4 tablets per day for the following 3 days, or a placebo.8 As shown in Figure 3, Daflon 500 mg showed outstanding rapidity of action, as almost half of the patients noticed a significant improvement after only 2 days of treatment, versus only 6% in the placebo group!
This outstanding fast efficacy is attributed to the unique micronized form of Daflon 500 mg. Therefore, the very small size of Daflon 500 mg particles, as compared with other phlebotropic drugs, (1.7 μm vs 36.5 μm) leads to greater absorption9 (twice more), stronger and faster efficacy with Daflon 500 mg. 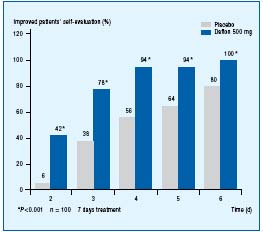 Figure 3. Patients recognize a significant improvement from the
second day of treatment with Daflon 500 mg.

Both the Cospite and the Misra studies have been continued during 2 and 3 months, assessing the frequency and intensity of the attacks versus nonmicronized diosmin and placebo respectively. The dosage was then of 2 to 3 tablets per day. The intention was to see if the treatment with diosmin or placebo was able to modify the number and the duration of the hemorrhoidal attacks. It was also to check if the unique micronized form of Daflon 500 mg presented any advantages compared with the other forms.
The results obtained demonstrated a significant reduction in the number of acute episodes in all groups (P<0.001), but more evident and significant (P=0.02) in the subjects treated with Daflon 500 mg (Figure 4). 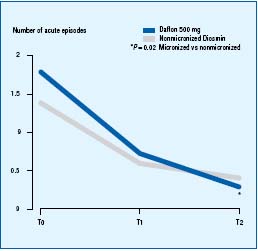 Figure 4. The superior reduction of acute episodes with
Daflon 500 mg, thanks to the micronization.

In the Misra study, it appeared that the number of recurrent hemorrhoidal attacks was significantly lower in the patients who took Daflon 500 mg in prevention, with more than 6 out of 10 patients without any recurrent bleeding (Figure 5). 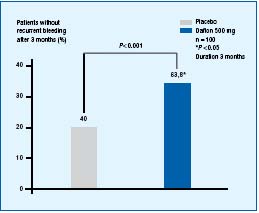 Hemorrhoids are very disabling for the patients, and recurrent attacks are frequent.
The inflammation associated with acute crisis, involving enzymatic activity, free radicals, and inflammation mediators lead to pain and bleeding. Thanks to its unique pharmacological properties, Daflon 500 mg meets all the needs of an efficient hemorrhoidal treatment. The clinical benefits of such properties are now well documented.
These two studies have demonstrated that the unique micronized form and comprehensive mode of action of Daflon 500 mg provide doctors and patients with a faster and stronger efficacy on acute attacks, at the dosage of 6 tablets for the first 4 days, and 4 tablets for the next 3 days. This efficacy allows a lower rate of recurrences, in the long term, and a decreased intensity and duration of the recurrent attacks (dosage of 2 tablets per day).