Epidemiology of pulmonary embolism in Japan

Pulmonary thromboembolism (PTE) is a well-known fatal disease. It is estimated that the annual incidence of pulmonary embolism ranges from 20.8 to 210 per 100 000.1-3 In the USA, approximately 10 % of patients die within 1 hour after a PTE.3 In Japan, it is thought that the incidence of PTE is much lower than that of the USA and Europe.4 However, several studies show that the incidence of PTE in Japan is increasing.5-7 The increased incidence of PTE is thought to be due to not only the progress of diagnostic techniques, but also westernization of the Japanese lifestyle and greater life expectancy.8 As the importance of PTE in Japan has been recognized, air travel-related thrombosis (also called “economy class syndrome”) has come to the attention of physicians and lay people in Japan. PTE research in Japan is increasing. This study was undertaken using Japanese data to determine the current epidemiology of PTE in Japan.

Table I.
The Incidence of
PTE at autopsy.

According to death certificates, the number of deaths due to PTE increased remarkably from less than 100 in the 1960s to about 1700 patients in 2000.15
In Japan, there are few reports about the incidence of PTE. (Table II). Kumasaka estimated that there are 3492 patients with PTE (95% confidence interval 3280-3703) per year (2.91 per 100000) according to the questionnaire from 2341 hospitals in Touhoku area.4 The estimation of PTE incidence in Japan from clinical diagnosis is at least 10 times less than that in the USA.

In the multicenter registry of PTE in Japan,16,17 18% of patients had chronic PTE. However, in the USA only, 0.1% to 1% of patients progressed from acute pulmonary embolic events to chronic PTE.18 Nakamura estimated that the difference of incidence in acute and chronic PTE between Japan and the USA may come from the characteristics of Japanese PTE, or an underestimate of the number of acute pulmonary embolism.17
Deep vein thrombosis (DVT) is the major cause of PTE – causing 8.2% to 24% of cases.16,19 Hoshino reported that 54% of DVT with PTE was asymptomatic.20 This may mean that a large number of PTE cases are not diagnosed in Japan. There are few reports of the frequency of DVT in Japan; however, the incidence of DVT after general surgery, gynecologic surgery, and orthopedic surgery was as high as the incidence of DVT in Western reports.21
In acute PTE, the female rate tends to be higher than the male rate. The rate of chronic PTE is higher than that of acute PTE. (Table III) In distribution of PTE by age, the peak incidence of both acute and chronic PTE was 60 years. On the other hand, (Figure 1) the incidence of acute PTE increases with age in the USA.22 In Japan, quite a few patients over 70 with PTE may not be diagnosed.

Table III. Male / female ratio of PTE in Japan.
Studies by Kumasaka and Mieno may be included the cases of
chronic PTE. 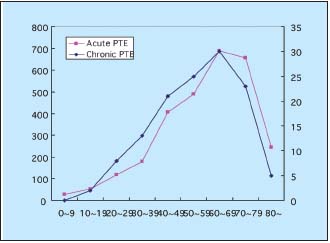 The most frequent symptoms of PTE is dyspnea, chest pain, palpitation, cardiogenic shock, and syncope (Table IV). Comparing to the report from the USA,3 the rate of the critical symptoms of Japanese PTE such as syncope and cardiogenic shock is high. This result may show many mild PTE is not diagnosed. Concerning the place of onset of PTE, it is a frequent in inpatients as in outpatients. Due to sudden death, it may be difficult to diagnose PTE in outpatients.

Risk factors of PTE and detection of the origin of
embolus

The detection rate of the origin of embolus (DVT) in PTE patients is from 33% to 71%.16,19 This difference of detection rate of DVT may depend on whether cardiovascular physicians or internists do the research. The origin of DVT was the femoral vein in 40% of PTE, iliac vein in 5%, and calf vein in 40%.19 The cause of the low rate of embolus from the iliac vein may be that the embolus has already moved to the pulmonary artery. It is remarkable that in Japan, one of the major embolus origins of PTE is a calf vein thrombus.

The detection of PTE from symptoms and risk factors is important in the diagnosis PTE. Generally, the first tests performed is blood gas sampling, chest X ray, electrocardiogram, and echocardiogram.
The major diagnostic method is lung scan in acute PTE and pulmonary angiography in chronic PTE. The lung scan is used to screen for PTE. Pulmonary angiography is performed to confirm the PTE diagnosis because of the low specificity of PTE diagnosis by the lung scan. Contrast-assisted computed tomography (CT) was used to diagnose PTE together with lung scan and pulmonary angiography. The frequency of using CT for PTE diagnosis is increasing remarkably.25 (Table VI) One reason is that there are quite a few hospitals without lung scan or cine angiography equipment that can confirm a diagnosis of PTE. The another reason is that the remarkable advance of CT and magnetic resonance imaging assure more accurate diagnosis of PTE.23 Clearly, the progress of diagnostic equipment plays a role in the increase of PTE in Japan.

The treatment of PTE

The treatment of PTE is to save lives, improve symptoms, and prevent further PTE. According to Japanese guidelines for acute PTE, the severity of acute PTE has been classified into 3 grades.26 Anticoagulation therapy is recommended for all grades of PTE. Thrombolysis, interventional therapy, and surgical thrombectomy are recommended for more severe PTE. The indication of surgical thrombectomy is the unimproved PTE with medication or severe PTE where medication is contraindicated. A temporary or permanent IVC filter is used to prevent PTE from recurring. As interventional therapy, aspiration thrombectomy, fragmentation thrombectomy, and rheolytic thrombectomy are performed. The one advantage of interventional therapy is that it can be performed immediately. The temporary and permanent IVC filter is used for prevention of recurrent PTE. A combination of anticoagulant and thrombolytic therapy was used on 74.7% of all acute PTE patients. Of acute PTE, 6.6% was treated by catheter interventional therapy; surgical thrombectomy was performed on only 2.9% of acute cases. The temporary and permanent IVC filter is used for prevention of recurrent PTE. An IVC filter was put in for 22.3% of acute embolic patients. Thromboendoarterectomy is used for severe chronic PTE (Table VII). Therefore, the rate of surgical therapy in the chronic PTE group is higher than in acute PTE. Chronic PTE cases with recurrent PTE underwent thrombolytic therapy.

Clearly, from the analysis of PTE incidence from previous reports, further detailed research is needed. The incidence rate is increasing. Accurate diagnosis contributes to accurate knowledge and treatment of PTE. 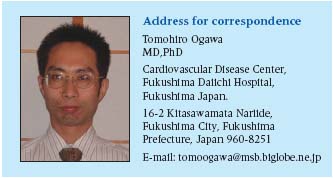