Chronic venous disease is multifactorial. Although the main pathology of chronic venous disease is reflux and obstruction, several other factors play a role as well. These include the duration, distribution, and extent of disease, but also additional factors such as obesity, and musculoskeletal and heart failure. This is especially important for those with advanced disease, as these factors that impede venous return may be more common. In fact, there are reports where people do not have evidence of venous disease but still experience “venous-like” symptoms. This paper examines in depth some of the most important factors that impede venous return and explains their dynamic and association within the spectrum of chronic venous disease. Other than recognizing such factors, it is critical to consider that despite appropriately treating reflux and obstruction, patient symptoms may not improve due to the continued presence of these contributing factors. This knowledge further sets the stage for modifying patient conversations. It is important to appropriately discuss expectations with patients for the predicted improvement of their disease. Lowering expectations when several comorbid factors are identified and focusing on the correctable ones such as diet and exercise will all go a long way in patient well-being and recovery.

Chronic venous disease is a complex condition with multiple contributing factors. The effective diagnosis and treatment of this condition relies upon a systematic consideration of each and every one of them. The pathophysiology of the impediment of venous return is primarily obstruction and reflux related. Whereas these remain the primary culprits, there exist additional risk factors. It is necessary to account for them when treating patients with chronic venous disease, as they could be contributing factors exacerbating the patient’s condition. On the other hand, at times, they could even be the major etiology for the patient’s signs and symptoms, leaving obstruction and reflux as innocent bystanders.

The first step involves an assessment of the symptoms presented by the patient.1 The symptoms paint a picture. The frequency, position, duration, onset, and transforming factors all need to be rigorously considered to evaluate their potential contributions to a chronic venous disease diagnosis.1 This is especially true of chronic venous disease, since its symptoms have a low specificity.1 Some of these include edema, muscle pain, tingling, varicose veins, and skin alterations.2 They could have considerable overlap with other etiologies such as tendonitis, peripheral neuropathy, arterial pathologies, etc.2 For example, edema could also be attributed to heart failure, or swollen legs with drug interactions.1 A study evaluating the occurrence of “venous symptoms” in patients with venous disease versus other pathologies found the difference to be minimal.3 Thus, whereas the symptoms of chronic venous disease alone are not sufficient to confirm chronic venous disease, they must be appropriately evaluated.1

Overall, the factors affecting venous return can be studied under 2 wings: vascular and other. The vascular etiologies include reflux, obstruction, vascular malformations, vein wall compliance, and lymphedema. Obstruction and reflux are typically accounted for in the diagnosis and treatment and are the major pathophysiology factors in the widely used CEAP classification system (Clinical-Etiology-Anatomy- Pathophysiology).2 In a study evaluating the emergence of post-thrombotic syndrome in patients with a prior deep venous thrombosis (DVT), obstruction and reflux together increased post-thrombotic syndrome by a 3.5 times odds ratio.4 Whereas these factors remain critical, it is essential to draw attention to the others that may play a role in the story as well.

Obesity
Obesity is one such player. It has been a rising epidemic in the United States with a 41.9% prevalence in 2017-2020.5 With a definition of obesity as body mass index (BMI) ≥30 kg/m2, it is projected that by 2030, about 50% of the population will be obese.6 Obesity is not only a health crisis, but an economic predicament. This increase from 2010 levels will account for an additional $549.5 billion in medical expenses.7 Obesity manifests as an inflammatory state and is a key contributor to the metabolic syndrome, one that can result in major pathologies from diabetes to cancer.8 It is not surprising that it plays a role in chronic venous insufficiency as well.

Chronic venous disease patients who are also obese fall into a higher CEAP class than those who are not obese.9 This correlation between obesity and chronic venous disease (CEAP C parameter) is independent of sex and age and stays true on accounting for metabolic-syndrome–related pathologies such as hypertension.10 Obese patients also have higher occurrences of varicose veins and venous leg ulcers.9 Furthermore, in a study of morbidly obese patients with chronic venous- insufficiency–like symptoms (BMI≥40 kg/m2) where obesity was associated with a higher CEAP class and increase in venous clinical severity score, two-thirds of legs lacked a venous pathology, suggesting obesity could even be an independent contributing factor to the symptoms.11 Evidence has been growing on the pathophysiology of its contribution. Obesity has been linked to higher intra-abdominal pressures.12 This creates a functional obstruction and environment for an alteration in venous physiology. For example, it has been found to heighten venous reflux, as quantified by venous filling index and venous filling time.9 It has also been found to result in higher femoral vein diameters and vein pressures than in the nonobese.9 Notably, this is seen across the postures sitting, standing, and laying down.9 The increased femoral vein diameter is complemented by a decreased femoral vein velocity.13 Ultimately, venous physiology alterations cause venous hypertension that can result in an inflammatory cycle, edema, and skin damage, which are the typical signs and symptoms observed.14

Its contributions are best illustrated through a case study (Figure 1). A 63-year-old female presented with bilateral lower extremity edema (C2-3). A superficial vein reflux on the left lower limb was identified via ultrasound. However, this alone could not explain the severity and extent of bilateral symptoms. She had bilateral pain, heaviness, itching, and edema, of equal intensity on both sides. The answer to her clinical presentation lay in her BMI: height, 162 cm; weight, 122 kg; BMI, 46.5.

Muscle pump function
Another player that cannot be discounted is musculoskeletal in nature: muscle pump ability. Interestingly, in obese patients, the calf muscle was found to be more effective with a higher ejection fraction and ejection volume.9 This contradiction can be resolved when placed in its physiological context. In obese patients, there is also a drop in the amount of physical movement.9 This would decrease its utilization, making it unable to make up for the higher reflux levels observed in obese patients.9

Lymphedema
Returning to vascular-related factors, lymphedema is also one that must be explored. It was believed that the venous capillaries and venules were responsible for the majority of interstitial fluid returning to the vasculature, but it is now better appreciated that lymphatics play a much bigger role.15,16 This can be fundamentally understood through the revised Starling pressure principle, which actually points to a small filtration at the venous end.15,16 This shifts the burden of responsibility for chronic edema as it can occur when filtration is greater than lymphatic coverage as a result of increased filtration, decreased lymphatic coverage, or an amalgam of the two.16 Thus, in a diagnosis of chronic venous disease, it is important to make the distinction between venous etiology or lymphatic attributions or an amalgam of the two for the signs and symptoms seen. Obesity and lymphedema can act synergistically as well. Recent evidence has accumulated linking lymphatic damage to increased adipose buildup and expression of adipocyte-related markers, and conversely, obesity with altered lymphatic drainage and less absorption of interstitial fluid.17

Anatomical factors
Next, we move our attention to anatomical dispositions and look at the contributions of static foot disorders. Whereas these disorders have a prevalence of about 8% to 26% in the general population, they were found in 31% of limbs in a group of patients with chronic venous disease, warranting an exploration of the role they play.18 These disorders can be described by the Dijan-Annonier angle, the angle created by the medial sesamoid, talus navicular joint, and calcaneus bones.18 Normally, as we walk, the foot acts as a pump, directing the blood from the distal veins of the foot to more proximal veins.18 However, in a static foot disorder, the angle with which the foot touches the ground deviates either in the flat foot or hollow foot direction, and this negatively affects venous return.18 On evaluating the odds ratios for chronic venous insufficiency, the hollow foot yielded 4.2, whereas a flat foot yielded a 3.1.18 Not only did this study correlate static foot disorders to chronic venous disease, but also intertwined other critical risk factors such as obesity and the impact of position. Obese patients (BMI>30) were found to disproportionately have hollow feet, potentially increasing their risk for chronic venous disease.18 Position also had an impact, with standing being significantly correlated to hollow feet.18 Thus, factors such as the morphology of the foot and position must also be accounted for in the assessment of chronic venous disease.

Dynamic factors
Complementing the anatomical factors are dynamic ones. The ankle’s range of movement and calf muscle ability have both been linked to chronic venous disease as well.19 Range of movement was quantified in terms of dorsiflexion and plantarflexion, and calf muscle efficiency by the ejection fraction and residual volume fraction.19 Both were more impaired in chronic venous insufficiency patient groups with ulcerations than in the group with normal limbs.19 The limite-drange-of-motion factor itself was also associated with the presence of impaired calf muscles.19 A potential mechanism suggested has been that venous disease, complicated by risk factors affecting ankle movement such as trauma, arthritis, or physical inactivity, could limit the range of motion and subsequently impact activation of calf muscles.19 Ultimately, this would explain the ulcerations associated with these 2 factors.19 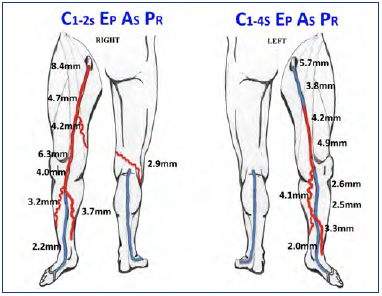 Figure 2. Case study of the contribution of musculoskeletal factors to chronic venous disease. Schematic representation of the venous reflux pattern of a 61-year-old female, including venous diameter and CEAP classification in both lower limbs. Venous disease was more pronounced on the right limb; however, the left limb was more symptomatic. This can be attributed to the knee issues on the left side.

This was seen in the case of a 65-year-old male patient who presented with bilateral lower extremity edema and skin discoloration (C2-4) (Figure 3). He was found to have pulsatile flow bilaterally in the deep and superficial veins, even in the standing position. Superficial and deep vein reflux were absent, and thus could not account for the severity and extent of his signs and symptoms. However, he was found to have a longstanding history of right heart failure. This was an illustrative instance of the importance of systematically considering other etiologies in accounting for “venous” symptoms.

There have been cases as well where these factors act in concert. Thus, a global evaluation is all the more important. A patient with a BMI of 35 for 20 years had a history of chronic heart failure, infections (cellulitis), and a lack of physical activity. The combination of his heart failure and obesity could be the key to understanding his venous progression, beyond venous pathologies alone.

The effective management of chronic venous disease requires seeing the patient as an entity and not a disease. Whereas reflux and obstruction may remain the most common contributors to chronic venous disease, they are by far not the only ones. Other systemic factors from vascular lymphatic functioning to obesity, and physical activity, musculoskeletal pumps, pedal morphology, and heart failure, all may play critical roles in accounting for the clinical presentation. They may coexist with obstruction and reflux and simply accentuate conditions or be the driving factors for the progression of chronic venous disease. Careful consideration of these factors in a synergistic fashion for each patient will allow for the best treatment. Further work is needed in exploring how these factors act in combination with one another, and better metrics are needed to track their management. Finally, the impact of emphasizing well-being from diet to exercise and setting appropriate expectations should not be discounted in patient healing and recovery.