Foam sclerotherapy for the management of varicose veins: a critical reappraisal

Foam sclerotherapy is often presented as a new method for the management of varicose veins. However, several reports established most of its principles approximately 50 years ago. Minor modifications in the way foam is produced, as well as the use of ultrasound to guide it to all of the sites of venous reflux, have resulted in a renewed interest in this technique. Recently, we have progressed from observational studies that established the efficacy and safety of this technique to the first randomized controlled trials. We need long-term follow-up in properly controlled randomized studies before we can claim that ultrasound-guided foam sclerotherapy has reached maturity and can be performed with the fully informed consent of our patients.

For the last few years, there has been a revival of foam sclerotherapy as a treatment for varicose veins. However, this technique is not new. It was first described in 1939 by S. McAusland.1 He injected froth, produced by shaking a rubber-capped bottle filled with sodium morrhuate, into spider veins. A few years later Robert Rowden Foote produced foam by shaking 1 mL of ethanolamine oleate in a 2-mL syringe. He reported that this soapy froth was the best injection fluid for the management of spider veins.2 In 1949, Sigg was the first to report that the injection of foam into a vein was beneficial because it washed away less rapidly, thus introducing the concept that increased viscosity foam has advantages over other contemporary sclerotherapy techniques.3 The following year, Orbach compared the efficacy of sodium tetradecyl sulfate (STS) foam with that of an injection of an equal amount of STS in liquid form. The end point was established as the length of thrombus generated by injecting the tail vein of mice. He found that the STS foam had 3.5 to 4 times the thrombogenic property of the solution.4 In 1953, the Norwegian doctor Arve Ree injected pure etamolin foam into varicose veins and reported excellent results in a series of 50 patients. The foam was produced by vigorously shaking a bottle of sclerosant solution and aspirating the bubbles into a syringe.5 The amount of foam injected varied from 2 to 7 mL according to the size of the varix. In 1956, Peter Fluckiger was the first to notice that the foam could be directed into regions other than the site of injection by manual manipulation.6 This concept is now widely practiced with ultrasound-guided foam sclerotherapy.

In the 1990s, there was some refinement of the techniques that produced foam and this led to a revitalized interest in treating varicose veins using this method. Juan Cabrera used a rotating brush to produce microfoam with C02 as a carrier gas.7 The advantage of C02 is the faster foam degradation that is achieved if used instead of air. The details of this method were not published although the results were good. Alain Monfreux produced foam by generating negative pressure. He did so by drawing back the plunger of a glass syringe containing liquid sclerosing solution whose outlet was tightly closed with a plastic cap.8 This technique produces relatively large-diameter bubbles, but it cannot be standardized and, as a result, the quality of the foam that is produced varies when equal proportions of air and liquid are mixed.

Lorenzo Tessari’s Tourbillon technique is the most frequently reported in the English literature. Two plastic disposable syringes are connected by a three-way stopcock. The foam is formed by mixing the liquid sclerosant with 4 or 5 parts of air, through 20 passes between the two syringes with the hub at a 30° rotation. This rotation narrows the stopcock passage generating high turbulence, which produces a high quality microfoam9 (Figure 1). 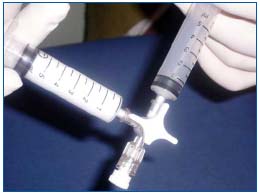 Figure 1. Foam (6 mL) was produced with a double syringe and a three-way stopcock (Tessari’s Tourbillon technique).

DEFINITIONS AND PROPERTIES OF THE SCLEROSING FOAM

Sclerosing foam is a mixture of gas bubbles in a liquid solution that contains surface-active molecules. The gas must be well tolerated by patients, physiologic, and the bubble size should be, preferably, under 100 μ. According to the bubble diameter, foams can be classified as froth, macrofoam, minifoam, and microfoam.

If the relative volume fraction of liquid is less than 5%, the foam is classified as dry, whereas if it is more than 5%, it is classified as wet. Wet foam (eg, Tessari’s foam) has the maximum stability.10 Uniform bubble diameter also provides more stability because smaller bubbles empty into larger bubbles. This can be explained by Laplace law, which states that the distending pressure in a bubble is inversely proportional to its radius. Frullini was likely the first to emphasize that silicon, which is present in catheters and syringes, interferes with the structure of the sclerosing foam by breaking the links of polar macromolecules thus reducing the half-life of the foam. He concluded that the shorter the contact of such molecules with silicon the better the quality and duration of the foam.10

Foam holds several advantages over traditional liquid sclerotherapy. Once a liquid is injected, it mixes with blood in the vein and dilutes the concentration of the sclerosant. Foam, on the other hand, displaces the blood allowing direct contact of the sclerosant with the endothelium. As a result, the efficacy of the sclerosant is increased hence a lower concentration can be given to treat varicose veins. In addition, a given volume of liquid can be used to produce four or five times its volume in foam, depending on the foaming method. This allows the use of a smaller total dose of sclerosant to achieve the desired effect. Moreover, extravasated foam is much better tolerated than extravasated liquid. Probably the most significant advantage of foam is that it is echogenic, which dramatically increases the accuracy with which individual varicose veins can be treated.11

The clinical effectiveness of ultrasound-guided foam sclerotherapy was reported in a series of 500 patients with varicose veins by Cabrera et al.13 All patients had an incompetent saphenofemoral junction with an initial diameter of between 9 and 32 mm. After 3 years, 81% of the patients had a fibrosed great saphenous vein, while in 96.5% of the patients, all superficial branches had disappeared. From this study, it is not clear what percentage of the originally recruited patients were followed up for 3 years. Further studies did not subsequently confirm the very high incidence rate of disappearance of superficial branches. The authors reported no serious complications, such as deep vein thrombosis (DVT), however, it appears from the methodology that they did not specifically look for DVT with duplex ultrasonography in the follow-up visits at 7 days and 1 month.

In another study, 177 patients with varicose veins, who were recruited from 3 different practices in Italy, were used to assess the efficacy and safety of ultrasoundguided foam sclerotherapy. Complete obliteration of the injected vein or antegrade flow within the treated vessel was observed in 161 (91%) patients at 1 month. This percentage was reduced to 67% among 66 patients who had a second follow-up visit at 138 (mean) days. An improved outcome was observed at 30 days for patients with CEAP (Clinical, Etiological, Anatomical, Pathophysiological) clinical class 2 than for CEAP clinical classes 3 to 6. The authors do not appear to have tested for the statistical significance of this difference.9

Bhowmick et al, in a series involving 35 legs with great saphenous varicose veins treated with polidocanol microfoam, reported that 2 patients developed deep vein thrombosis in the distal calf veins. In addition, 7 legs had symptoms resembling superficial thrombophlebitis. In this study, 15 to 20 mL of microfoam was injected.14 Two years following the publication of this study, in the European consensus meeting on foam sclerotherapy, the majority of the participants stated that a volume of 6 to 8 mL should be administered per session for the management of great saphenous varices and no more than 3 mL for the management of the small saphenous vein.12 Hopefully, adherence to this recommendation will decrease further incidences of this complication.

There is a single case report of stroke that developed following foam sclerotherapy for the management of varicose veins.15 In total, 20 mL of foam was injected. A carotid duplex-ultrasonography performed immediately following this event showed normal arteries with rapidly moving echogenic particles within the carotid lumen. A transesophageal echocardiogram confirmed the presence of a large (18 mm) patent foramen ovale (PFO). The patient had a good recovery, but the authors have since changed their practice and now inject less than 10 mL of foam per session. A restricted amount of foam was recommended at the European consensus meeting for PFO patients.12

Van Neer, in an elegant case report, presented a patient with varicose veins secondary to an incompetent thigh perforator that was successfully treated with ultrasoundguided foam sclerotherapy.16 More studies are needed to investigate the effectiveness and safety profile of this technique in the management of incompetent perforating veins.

There is limited information on the effectiveness of ultrasound-guided foam sclerotherapy in the management of recurrent varicose veins. My group has recently reported our experience with this technique in a series of 38 patients who had symptomatic recurrent varicose veins in 45 legs. A single sclerotherapy session was adequate in 26 (58%) of all legs. Only 5 legs (11%) needed 3 or more sessions. In 87% of all legs, complete elimination of both varicose veins and all reflux points had been achieved at the end of treatment. A positive association between the amount of injected foam and CEAP class (r=0.45, P=0.002) and venous clinical severity score (VCSS) (r=0.45, P=0.012) was found. There were no instances of DVT, but self-limiting superficial thrombophlebitis occurred in 6 (8.2%) of the 73- injection sessions.17

My group has prospectively compared, in a randomized study, ultrasound-guided foam sclerotherapy with saphenofemoral ligation (n=30) with surgical treatment of varicose veins along the distribution of the great saphenous vein system (n=30). All patients were suitable for day-case surgery. Surgical treatment included saphenofemoral ligation, stripping of the great saphenous vein, and multiple phlebectomies. Median time to return to normal activities was significantly reduced in the foam sclerotherapy group (2 days) compared with the surgical group (8 days) (P<0.001, Mann-Whitney). The Aberdeen Vein Questionnaire score was significantly reduced at 3 months, by 46% in the sclerotherapy group and by 40% in the conventional surgery group (P<0.001, Mann-Whitney). The cost of the procedure in the sclerotherapy group was 672.97 pounds sterling—significantly less than conventional surgery (1120.64 pounds sterling). In the foam group, at 3 months, four patients had a recanalized vein that needed a further session of sclerotherapy, which resulted in a short-term closure rate of 87%.20 Alos et al performed a controlled clinical trial to assess the safety and efficacy of sclerotherapy using polidocanol foam compared with liquid polidocanol.21 The foam group received a 50% lower concentration of sclerosant than the liquid sclerosant group. Pain, inflammation, and pigmentation appeared more often with foam sclerotherapy. Interestingly, at one year the incidence of pigmentation was 6.3% in the liquid group and 33% in the foam group. The authors attributed the higher incidence of pigmentation to the use of elastic compression for only 48 hours following sclerotherapy. The longer the compression the less the incidence of pigmentation.22

Foam sclerotherapy was first described in 1939. Several reports in the 40s and early 50s established most of the principles of this technique. More recently, welldocumented observational studies have demonstrated a good safety profile and satisfactory short and intermediate results with foam sclerotherapy. A couple of randomized trials have clearly shown the superiority of this technique versus liquid sclerotherapy in eliminating the sites of reflux along the great saphenous vein system. The long-term results of ultrasound-guided foam sclerotherapy have not been compared with the traditional surgical treatment for varicose veins. In addition, this technique has not yet been compared with other minimally invasive techniques such as radiofrequency or laser ablation of the saphenous vein. These types of studies are urgently needed and will help us provide our patients with the information required to give a truly informed consent.