Focus on venous embryogenesis of the human lower limbs

Embryogenesis of the venous system is a complex phenomenon that is not fully understood. In spite of the studies done by Born, Hochstetter, and Lewis, we do not know the precise chain of events leading to vasculogenesis of the venous network in humans. Yet, this is an important topic in order to improve our anatomical knowledge, which is of the highest interest in clinical practice. A good knowledge of anatomy is mandatory to perform in-depth assessments of chronic venous disorders by ultrasound mapping. Understanding venous embryology is also crucial to investigate and treat congenital venous malformations. Further research projects, particularly using new techniques of 3D modeling combined with immunolabeling of the anatomical structures (computer-assisted anatomical dissection) will contribute precious data regarding the onset and maturation of the human embryo’s vessels, as well as providing data on the relationship between veins and nerves.

The aim of this paper is to focus on the updated knowledge about venous embryogenesis of the lower limbs and to discuss the interest of a new research technique for 3D modeling of human embryos– computer-assisted anatomical dissection (CAAD).6 A better understanding of embryology, and therefore venous anatomy, is of the highest interest for the clinical practice in phlebology and vascular medicine (Figure 1). 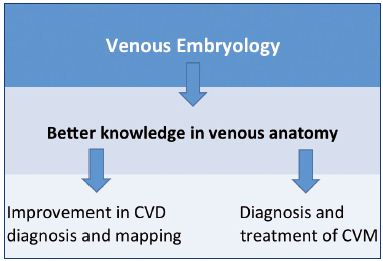 Figure 1. Usefulness of embryology and anatomy in clinical
practice, which is crucial for the investigation of CVDs and
management of CVMs.
Abbreviations: CVD, chronic venous disease; CVM, congenital
venous malformations.

The Scandinavian method of Born7 was created in 1883 to build 3D reconstructions of embryos. It is based on the enlargement of serial anatomical slices, displayed on a tablet of colored wax. In 1893, Hochstetter also made huge progress on the embryogenesis of amniotes.8 However, the most innovative results were shown by Lewis in 1906 in the rabbit.9 In addition, the works of Bokova (1970)10 and Gilbert (1990)11 are also noteworthy.

Since then, several works on the Hox genes have brought about a revolution in our knowledge of limb organogenesis. Hox genes control the positional information, spatial orientation, morphogen gradients, and cellular differentiation.12 Molecular models and growth factors also condition the limb’s development.13 Finally, vasculogenesis is also tightly related to the skeleton formation.14

Development of the Human Embryo
and Lower Limbs

Figure 2 recapitulates the Carnegie stages of organogenesis, which is the main period of interest for the lower limb’s development, taking place between the 4th and the 8th postovulatory weeks (Carnegie stages 13 to 23). Limb development is a complex phenomenon directed by Hox genes, as we have seen previously. Here, we will only consider the simple morphological point of view. The lower limb’s development steps are shown in Figure 3. The first bud of the lower limb appears a couple of days after the upper limb, around 33 days (embryo size, 8 mm; Carnegie stage 15). At the beginning, it is reduced to a flat palette, which appears thicker at its extremity and along its caudal border at 6 weeks (embryo size, 15 mm). This is explained by the superficial migration of ectodermal cells, which increases the density of vessels in those locations, particularly in the marginal venous network. The toes appear at stage 20 (50 days; 18 mm) and the limb’s development ends at stage 23 (56 days; 30 mm). 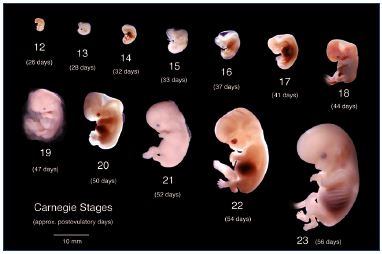 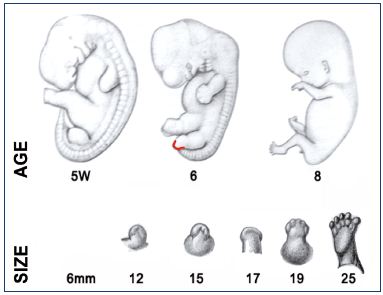 Figure 3. Development of the lower limb buds during organogenesis.

The early stages of development
The “primitive veins” were described by Lewis after observations made in the rabbit (Figure 4).9 Lower limb buds appear toward the end of day 10 during rabbit embryonic development. Starting on day 14, Lewis observed a concentration of the venous network at the caudal and distal aspect of the limb bud, which is called the marginal vein. This drains into a primitive fibular vein, then into an ischiatic and posterior cardinal vein (Carnegie stage 1). On day 17, he observed that the fibular vein became the main vein, while the lateral marginal vein disappears (Carnegie stage 2). At about 3 weeks of development (Carnegie stage 3), he noticed the existence of an anastomotic branch originating from the sciatic vein and connecting to a new vessel, the femoral vein. The latter forms the final deep venous system, while the sciatic vein disappears.

Figure 4. The primitive veins at week 5.
Note that the veins of the primitive limb are fed by the umbilical
vein (containing oxygenated blood): the blood flux goes from
the root to the extremity of the limb (black arrows). Therefore, the
veins appear first. The arteries then drain the blood back from
the limb (red arrows).
Abbreviations: 1, primitive marginal vein; 2, primitive fibular
vein; 3, primitive axial vein; 4, primitive ischiatic vein; 5, primitive
anterior tibial vein; Um, umbilical vein.

Theory of angio-guiding nerves
Later (after week 6), the arrangement of the venous network could be explained by the theory of the angio-guiding nerves proposed by Gillot15,16: the nerves appear at 6 weeks (embryo size, 18 mm; Carnegie stage 19; Figure 5). The axons and Schwann cells secrete a vascular endothelial growth factor (VEGF). It has a 2-fold role: (i) to attract the vascular plexuses to the vicinity of the nerves; and (ii) to induce their arterial, venous, or lymphatic specialization.17 The ephrin family (B2-B4) plays an important role in the differentiation of primitive endothelial cells.18

Fetal period
After postovulatory week 8, known as the fetal period, the venous plexuses along the three nerves condense and mature (Figure 6).

Data limitations
Data about the early stages are from small mammals and need to be confirmed by direct observations in human embryos. Angio-guiding nerves are just a hypothesis that is based on extensive anatomical observations in adults, but has not yet been confirmed in embryos.

Today’s Hypotheses and Proposals for the Steps of Venous Embryogenesis

Our knowledge is reduced to several hypotheses, which need to be confirmed by further direct observations and 3D reconstructions of human embryos (Figures 7 and 8):

• The lower limb bud first appears at 33 days (embryo size, 6 mm; Carnegie stage 15). The vascular layout is then reduced to a peripheral undifferentiated venous network, which is located subcutaneously and secondary to a central artery.

• Around week 5 (37 days; embryo size; 8 to 11 mm; Carnegie stage 16), the primitive veins emerge. A thickening appears at the distal and caudal aspect of the bud due to the migration of endothelial cells, and explains the location of the first veins of the limb, which are located superficially and are called the marginal venous sinus. 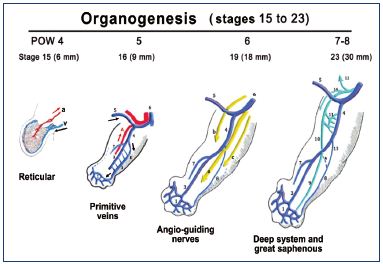 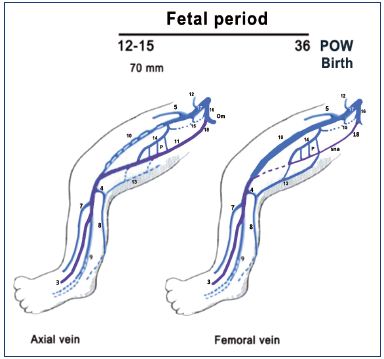 • The oxygenated blood comes from the placenta by the umbilical vein joining the posterior cardinal vein. It then reaches the root of the limb by the primitive ischiatic vein, feeds the primitive fibular vein, and finally, forms the lateral marginal vein located at the caudal aspect of the bud. The distal part of the marginal vein will form the “primitive small saphenous vein,” the very first vein present in the adult to appear in the embryo. At that time, the nerves do not exist. The blood goes back to the root of the primitive limb by the arteries. (Figure 7, left).

• Around week 6 (47 days; embryo size, 16 to 18 mm; Carnegie stage 19), the three angio-guiding nerves appear and quickly grow along the limb bud. This will initiate the development of the deep venous system and the great saphenous vein. In fact, due to the secretion of VEGF by the Schwann cells, the three angio-guiding nerves will attract the undifferentiated vascular plexuses and induce their maturation into veins, arteries, and lymphatics. These three angioguiding nerves are: (i) axially, the sciatic nerve; (ii) cranially, the femoral nerve; and (iii) caudally, the small sciatic nerve.

• Around week 7 to 8, the three venous plexuses of the lower limb grow and mature along the three angioguiding nerves. Along the sciatic (axial) nerve, the primitive axial vein becomes a huge vein and joins the deep femoral vein upwards. At this time, this is the main venous trunk of the thigh, but it will regress to become a small arcade in the majority of adults. Along the femoral (cranial) nerve from the cranial plexus, the great saphenous vein appears together with the femoral vein, which connects upward with the ischiatic vein to form the iliac vein. Downward, the anastomosis with the axial plexus will give birth to the popliteal crossroad. Along the caudal nerve (small sciatic), the caudal plexus forms the distal part of the small saphenous vein (SSV) below the knee and the cranial extension of the SSV at the thigh level. A possible anastomosis with the axial plexus will lead to SSV termination into the popliteal axis (saphenous popliteal junction or French “crosse”). Of note, around weeks 6 to 8, there is a medial rotation of the limb, where the cranial aspect of the limb becomes medial and the caudal aspect becomes lateral.

• At the end of the 12th week, organogenesis is finished and the venous anatomy is similar to an adult. However, some remodeling of the venous axis will occur, particularly at the femoral level. The axial vein, which is a large vein, will become a small arcade along the sciatic nerve, while the femoral vein commonly reduces to a thin network along the femoral nerve and will become the main venous axis of the thigh in 90% of the cases in adults.

• After 12 weeks, remodeling of the subcutaneous part of the superficial venous system (reticulum network) will lead to its definitive anatomy at birth. The venous valves appear and are closely related to the hemodynamic patterns of the anatomical arrangement, and thus, the blood circulation.

CAAD was first used by Yucel and Baskin to identify the penis nerves.19 Our laboratory then published several papers showing the benefit of CAAD for the studies of the male and female uretra20,21 and intrapelvic innervation.22 We recently dedicated the CAAD technique to the 3D reconstruction of the embryo’s limbs.6 Briefly, the principle of this technique is to make thin horizontal slices of the limbs. After digitalization and alignment of the slices, a different staining is used, in particular, proteins S-100 and D2-40 are stained to recognize the nerves and vessels, respectively. An example is shown in Figure 9 with the reconstruction of a big axial vein at the thigh. 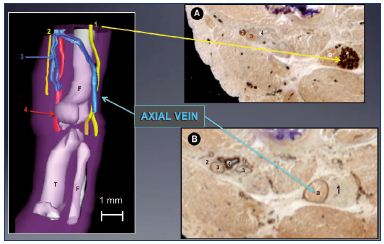 The first results of these 3D reconstructed limbs were recently obtained from three embryos at postovulatory weeks 13 to 156 (discussed in the following section and illustrated in Figures 10 and 11), but it is a work in progress as detailed data about the earlier stages are still lacking. 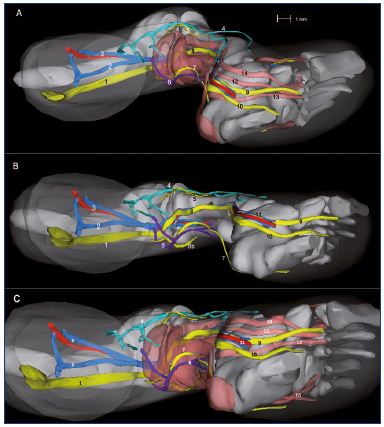 Anatomical variations of the femoral vein
Three types of anatomical variations of the femoral vein have been observed in 12% of adults (Figure 12).23 If the large primitive “axial vein” of the embryo persists, then either an axiofemoral trunk (unitruncular layout, 3%) or axiofemoral vein (bitruncular layout, 9%) is found in adults. Most commonly, a modal layout (88%) will be found in the adult’s anatomy: the primitive axial vein becomes hypotrophic and reduced to a small arcade. The main vein of the thigh is a femoral vein inside the femoral canal. 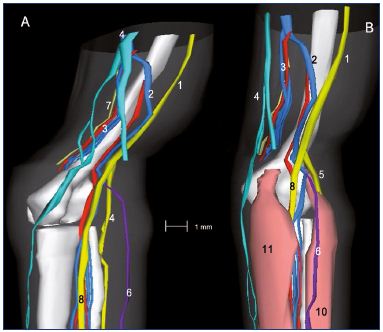 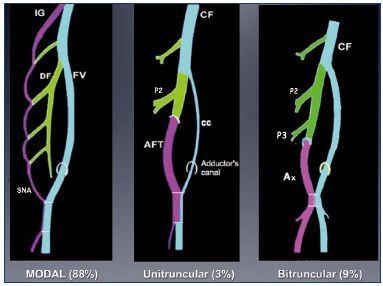 Figure 13. Remnant of marginal vein and fibular perforators in an adult.
Anatomical dissection after latex injection in the left leg (lateral view after resection of the fibula bone). Notice the alignment of the
fibular perforator veins connecting the thin marginal network to the fibular veins at specified locations (10, 14, 17, and 22 cm from
the apex of the lateral malleolus).
Abbreviations: 1, dorsal foot network connected to the anterior tibial perforators; 2, lateral marginal network connected to the fibular
veins; 3, calcaneus perforator vein; 4, Achilean vein joining the small saphenous vein.

Understanding embryogenesis is important mostly in terms of clinical applications: it improves our anatomical knowledge about the venous system and is particularly useful to perform a venous mapping for all CVD patients. Embryology is also essential for the diagnosis and management of congenital vascular malformations (CVM). As explained in the Hamburg classification of CVM,24 the severity of the malformations is related to the stage of the embryo’s development when they occur: (i) before week 4, they provide severe “extratruncular” malformations; (ii) between week 4 and 8, they are responsible for less severe “truncular” malformations; and (iii) after the organogenesis period (week 8), simple anatomical variations will occur.