The nonthrombotic iliac vein lesion (NIVL) was first described in 1908. Since then, it has become clear that the lesion is present in over half the general population in silent form. A clinical syndrome variously known as May- Thurner syndrome, Cockett syndrome, or “iliac vein compression syndrome”, caused by NIVL, is thought to be a rare form of chronic venous disease (CVD). However, with liberal use of intravascular ultrasound (IVUS), the lesion is found in over 90% of highly symptomatic CVD cases, with a very broad clinical and demographic spectrum. Silent NIVL in the general population may play a permissive role in the development of CVD. Venous stenting of NIVL provides excellent clinical relief including healing of stasis ulceration even when the associated reflux is left uncorrected. Liberal use of IVUS is recommended in CVD cases with significant symptoms of swelling, pain, or stasis skin changes.

It is well known that the left lower limb is more often involved in deep venous thrombosis than the right limb. Virchow attributed this predilection to the compression of the left iliac vein by the crossing right iliac artery.1 Chronic venous disease (CVD) is also more frequent on the left side. McMurrich2 in 1908 was the first to demonstrate an intrinsic web-like lesion obstructing the lumen of the left iliac vein at the arterial crossover point. Numerous autopsy studies3-5 since have confirmed the presence of such intraluminal lesions in a surprisingly high 20% to 30% of unselected cadavers. The morphology of the lesion can vary from a thin membrane to “ridges, velums, chords spurs, or bridges”; “quilted” wall adhesions, and even total occlusion.5 There is general agreement that the lesion is not postthrombotic but controversy persists whether it is ontogenic or traumatic from pulsations of the overlying artery. It is also clear from autopsy studies that extrinsic compression of the vein by the crossing artery occurs even more often than the presence of intrinsic webs and membranes.6 Recent data from magnetic resonance (MR) imaging suggest that the combined incidence of intrinsic and extrinsic lesions in the general population could be as high as 66%.7 Some confusion regarding the underlying pathology has arisen from use of the traditional nomenclature “iliac compression syndrome”, Cockett syndrome, and May-Thurner syndrome, which are often used synonymously. Since modern imaging modalities cannot distinguish between extrinsic and intrinsic lesions with adequate reliability, it is suggested that the term nonthrombotic iliac vein lesion (NIVL) be used to be inclusive of both types of lesions.

Diagnosis
Venographic features of NIVL are quite variable and often subtle (Figure 1). Extensive contrast studies by Lea Thomas and colleagues3-6 half a century ago established that the diagnostic sensitivity of venography for NIVL is only on the order of about 50%. Concurrent use of intravascular ultrasound (IVUS) with venography has confirmed the poor sensitivity of the latter in our own experience.8 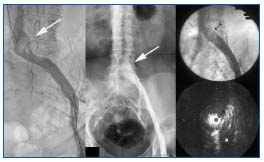 Figure 1. Variable venographic appearance of NIVL. Left: ‘classic’ appearance with contrast translucency appearing as a filling defect. Middle: Broadening (pancaking) of the vein with collaterals.
Right: the venogram appears entirely normal in about onethird of cases. Note the absence of collaterals. However, IVUS showed a tight lesion (inset) with lumen not larger than the 6 Fr IVUS catheter (arrow). The arrow in the venogram points to the general area where the IVUS lesion was found. By permission: J Vasc Surg. 2006;44:136-144.

This derives from obscuration of the lesion in frontal projections becoming evident only in lateral or oblique projections (Figure 2). Even with multiplane venography, some lesions can be missed. Since IVUS has a diagnostic sensitivity of >90% and is free of radiation, it has become the diagnostic standard in NIVL. 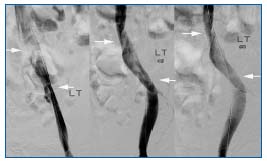 Figure 2. The proximal NIVL lesion is coronal and the distal lesion is often sagittal as the hypogastric artery crosses the vein from anterior to posterior rather than transversely. Note the differential
appearance and disappearance of the lesions as the tube is rotated from midline to lateral in the coronal plane: 0º, (Left), 45° (Middle), and 60° (Right). The proximal lesion is spiral often giving a ‘corkscrew’ appearance. By permission: J Vasc Surg. 2006;44:136-144.

Liberal use of IVUS in CVD patients has also provided a broader demographic spectrum for NIVL than the traditional concept.9 IVUS lesions occur in both sexes and all age groups; lesions are found both on the left and right side. A new finding was the occurrence of the lesion at distal arterial crossover points (Figure 3). NIVL has a very high prevalence in symptomatic CVD: over 90% of “primary” patients with significant symptoms of pain, swelling, or venous stasis skin changes will be found to have NIVL by IVUS examination. 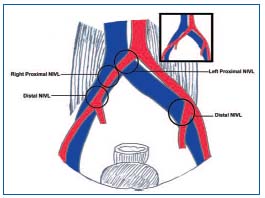 Is NIVL pathogenic?
Ever since its first description, controversy has surrounded NIVL with regard to its pathologic import, because the lesion appears to be largely silent in the overwhelming majority of the population in which it is found. In fact, some have argued that the lesion be considered a ‘normal’ anatomical variant because of its quiescence and high prevalence.7 On the other hand, NIVL is undeniably causative of pathology in several subsets of patients. Cockett and colleagues highlighted NIVL as a cause of clinical acute iliac vein thrombosis.10 Hundreds of welldocumented cases of this type have appeared in the literature since. In a large registry11 of patients with acute iliac vein thromboses, NIVL-like lesions are detected in about one-third or more of patients after catheter-directed thrombolysis. Stent placement to correct such lesions after successful clot lysis is now standard practice. Cockett and colleagues also described a chronic form of disease caused by NIVL presenting with leg pain and swelling.3 They popularized the notion that this form of the disease was prone to affect the left lower limb of young women, even though their clinical series included older patients, men, and involvement of the right leg as well. The notion that NIVL is pathogenic at least in some patients is now readily accepted,12,13 but the relationship between the symptomatic lesions in patients and the asymptomatic ones in the general population has remained obscure.

NIVL as a permissive lesion
One way to reconcile these apparent contradictions is to view NIVL as a permissive lesion.9 A permissive lesion is one that is generally silent until an additional pathology or sequela is superimposed and triggers symptoms. Numerous permissive lesions are known to play a role in human pathology. A well-known example is patent foramen ovale, which has a population incidence similar to that of NIVL (20% to 30%), but remains silent except occasionally when passage of a paradoxical embolus takes place. Some other examples include gastroesophageal reflux disease and asthma, ureteric reflux and pyelonephritis, cricopharyngeal spasm and Zenker’s diverticulum, Helicobacter and peptic ulceration, obesity and diabetes, diabetes and neuropathy, middle lobe syndrome and pneumonia, carotid stenosis, and transient ischemic attacks. A general principle in treating many of these complex pathologies is to address the permissive lesion first, which alone may remit symptoms. In nonresponders, the secondary pathology may need to be addressed in sequence.

NIVL displays many of these characteristics of a permissive lesion. Despite its high incidence in the general population, it remains largely silent. We hypothesize that additional pathologies or sequelae such as trauma, cellulitis, distal thrombosis, lymphatic exhaustion, or reflux may render the extremity symptomatic. In the elderly, atherosclerosis of the overlying artery, venosclerosis, decreasing mobility, and leg dependency or other comorbid conditions predisposing to pedal edema may be contributory factors in symptom expression. In some cases no such secondary aggravating factors are apparent and symptom expression may simply be related to further progression of the stenotic lesion or to another as yet obscure cause.

Results of stenting to correct NIVL
Venous stenting is safe and the morbidity is minor.14 “Primary” CVD cases enjoy extraordinary stent patency (Figure 4). Clinical results are excellent as well, as shown in Figures 5 to 8. Long-term data (unpublished) extending the follow-up to 9 years show no major decline in the survival curves. 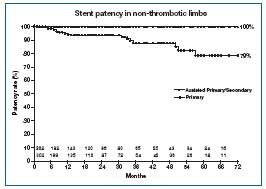 Figure 4. Cumulative primary and secondary stent patency in
‘primary’ CVD. Limbs at risk are shown in the bottom panel. 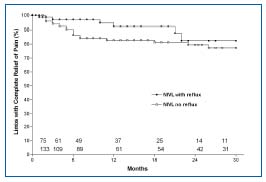 Figure 5. Pain relief following stent placement alone in NIVL+reflux and NIVL subsets. Reflux was not corrected in the first subset. The cumulative curves represent limbs (%) with complete relief of pain. At 21/2 years, 82% and 77% of limbs in the two subsets, respectively, were totally free of pain. There is no statistical difference between the curves. Limbs at risk at various time intervals for each subset are shown in the bottom panel (all SEM <10%). By permission: J Vasc Surg. 2006;44:136-144. 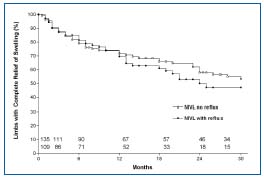 Figure 6. Swelling relief following stent placement alone in NIVL+reflux and NIVL subsets. Reflux was not corrected in the first subset. The cumulative curves represent limbs (%) with complete relief of swelling. At 21/2 years, 47% and 53% of limbs in the two subsets, respectively, were totally free of swelling. There is no statistical difference between the curves. Limbs at risk at various time intervals for each subset are shown in the bottom panel (all SEM <10%). By permission: J Vasc Surg. 2006;44:136-144. 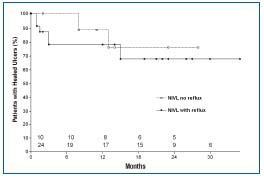 Figure 7. Cumulative complete ulcer healing following stent placement in NIVL+reflux and NIVL subsets. Reflux was not corrected in the first subset, yet 67% of ulcers remained completely healed at 21/2 years. Ulcer healing was 76% in the subset without reflux at 21/2 years. There is no statistical difference between the curves. Limbs at risk at various time intervals for each subset are shown in the bottom panel (SEM <10% solid line, >10% dashed line). By permission: J Vasc Surg. 2006;44:136-144.

A remarkable finding was that the thera peutic response to stent placement was excellent even when associated reflux, 30% of which was ‘axial’, was left uncorrected. Results in this subset were no different from the NIVL subset without reflux (Figures 5 to 8). Remarkably, 67% of ulcers healed (cumulative) in response to stenting alone, despite the presence of uncorrected residual reflux . More than other manifestations of CVD, stasis ulcer is thought to be a product of reflux. These results support the notion that NIVL is a permissive lesion. 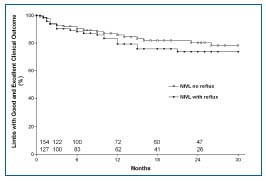 Figure 8. Overall symptom relief following stent placement in NIVL+reflux and NIVL subsets. Reflux was not corrected in the first subset. Each curve (cumulative) represents limbs with Grade 3 or 2 (excellent or good) outcomes for the specific subset. The curves are nearly identical. Limbs at risk for each subset at various time intervals are shown in the bottom panel (all SEM <10%). By permission: J Vasc Surg. 2006;44:136-144.

Current approach to ‘primary’ CVD patients
IVUS is recommended in patients with significant symptoms of swelling, pain (VAS>5/10), or stasis skin changes after conventional forms of therapy have failed. NIVL with significant lumen stenosis (>60%) will be found in a great many of these ‘primary’ CVD patients, and can be stented at the same session. In selected cases, laser ablation of the saphenous vein can be combined with stent placement.15 These are percutaneous procedures carried out on an outpatient basis (23-hour admission). Symptoms will ameliorate in most patients. In the minority where adequate relief is not achieved, additional open procedures such as veno-venous bypass or valve reconstruction may be considered. Prior stent placement does not preclude subsequent open procedures.