Influence of age, gender, duration of illness, and symptoms on pigmentation/ulceration in varicose veins of the great saphenous system

Background: Venous pigmentation and ulceration in varicose veins pose significant financial and psychological burdens and affect quality of life. Not all varicose veins progress to this stage (C4-C6 in CEAP classification), and knowing the predictors for progressing to pigmentation/ulceration in varicose veins helps address high-risk patients early on. Materials and methods: This is a retrospective observational study done in patients diagnosed with varicose veins in the great saphenous system and subjected to radiofrequency ablation with or without any adjunct procedure during the time frame of January 1, 2018 to December 31, 2019. Using standardized questionnaires, physicians interviewing participants at the time of examination noted risk factors for pigmentation/ulceration in the form of age, gender, duration of illness, and symptoms. Results: Among 247 limbs with varicose veins that involved the great saphenous vein and were subjected for radiofrequency ablation, C3 stage was observed in the highest percentage of cases (44.5%) followed by C2 stage (27.9%). Pigmentation or ulceration were observed in 27.5% of cases. Duration of illness (longer duration), male gender, and age (higher age) were identified as predictors of pigmentation or ulceration. Conclusion: Large-scale studies to identify cutoff values for duration of illness and age would help clinicians in making treatment decisions.

Varicose veins is a common chronic venous disease leading to life-limiting ulcerations and serious health risks such as deep-vein thrombosis.1 Venous ulceration accounts for more than half of lower-limb ulcerations.2 Venous pigmentation and chronic venous ulcer have heavy financial and psychological burdens, both to the individual and the health system, and significantly affect the quality of life.2-6 The pathophysiological mechanism underlying formation of venous pigmentation and ulceration has been attributed to macroscopic processes such as venous hypertension and destruction of venous wall architecture, which leads to chronic inflammatory processes that accumulate to form ulcers.7 The National Institute for Health and Care Excellence (NICE) guideline states that approximately 3% to 6% of patients with this condition will develop venous ulcers in their lifetime.8,9 In order to classify varicose veins, CEAP classification comprising clinical stage, etiology, anatomical location, and pathophysiology of varicose veins has been widely used since its introduction in 1994 by the American Venous Forum.10 With the 2004 revision of the CEAP classification, the C4 stage includes pigmentation or eczema (C4a) and lipodermatosclerosis or atrophie blanche (C4b), whereas C5 and C6 stages include cases with healed and active ulceration respectively and are associated with significant morbidity and altered quality of life in patients with varicose veins.11,12,13

There are several hypotheses regarding the development of venous ulcers; however, the most common and held to hypothesis is local venous hypertension, which leads to venous pooling and dilatation resulting in leukocyte trapping that ultimately leads to release of proteolytic enzymes and causes tissue damage.14 Newer hypotheses on the cause of venous ulcers involve cytokines/growth factors, tumor necrosis factorα and transforming growth factor β.15 Our series published in 2014 found venous ulcers to be prevalent in 3.9% of varicose vein cases and pigmentation in 33.3%.16 Our case series published later involving 533 varicose vein cases found 13.1% of such cases had venous ulcers and 37.1% had pigmentation.17

In a cross sectional epidemiological survey–based study of 8000 people carried out in France, 51.3% of females and 30.2% of males had chronic venous disorder, among which 50.5% of women and 30.1% of men were in C2 stage (varicose vein), and skin trophic changes (pigmentation and/ or ulcer) were seen in 2.8% of females and 5.4% of males. The information gathered from phone-based interviews in this study were later confirmed by clinical examination of patients with significant findings.18 Investigation to elucidate predictive models for venous ulcers has found previous ulceration to be the most important predictor.19 Not all cases of varicose vein progress to this stage, and the duration taken to reach this stage in untreated cases can vary. Also, research into the predictors of earlier progression to this stage is not extensive, although some proposed predictors include being overweight, duration of illness, age, and reflux velocity, among others.12,20,21

This is a retrospective cross-sectional observational study carried out in the Cardiothoracic and Vascular Surgery Department of Dhulikhel Hospital in Nepal. All patients diagnosed with varicose veins in the great saphenous system and subjected to radiofrequency ablation with or without any adjunct procedure during the time frame of January 1, 2018 to December 2019 were included in the study. Ethical approval was obtained from the International Review Committee (IRC) of the Kathmandu University School of Medical Sciences (KUSMS).

Consent was obtained and a structured questionnaire filled in by the physician interviewing participants at the time of examination in the Vascular Surgery Outpatient Department, noting the clinical examination findings, risk factors for ulceration/pigmentation in terms of age, gender, symptoms, and duration of illness. Calculation of the duration of illness since the first bothering symptom is taken into account.

The data were analyzed using Statistical Package of Social Sciences (SPSS) version 19.0. If we consider the proportion of cases with pigmentation and/or ulceration as 20%, the sample size will be 1.96*1.96*0.2*0.8/(0.05*0.05), which is 246.18 Continuous variables were expressed in the form of mean, standard deviation (SD), and range (minimum and maximum values). Nominal variables were expressed in the form of percentage. Means of the parametric variables were compared using the t-test (two variables) and the one-way analysis of variance (ANOVA) test (more than two variables). Frequency of nominal variables was compared using the Chi square test. P values of less than 0.05 were considered significant. Regression analysis was done to identify the predicting power of independent variables on dependent variables. Potential confounders were controlled in this study through a statistical approach, as regression analysis is able to control for the confounding variables and isolate the relationship of interest.22

A total of 223 patients were enrolled over the study period. Among them, 24 had two limbs evaluated, 105 had only their left limb evaluated, and 94 had only their right limb evaluated. For ease of analysis, 247 limbs were considered as independent cases even if there was bilateral involvement within a single patient. Data pertaining to the right limb and that for left limb were entered separately. 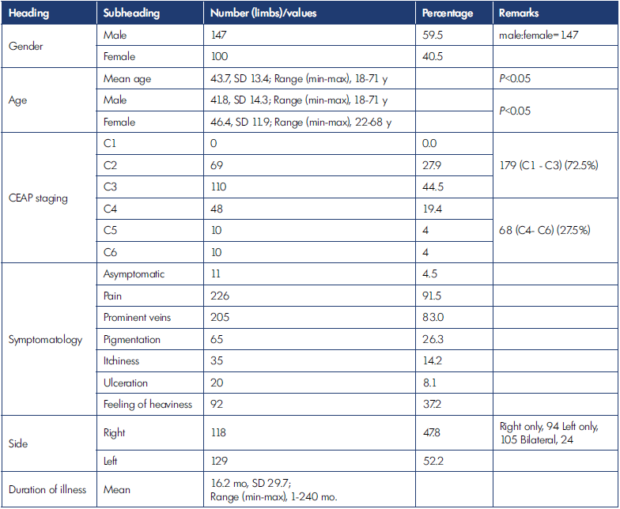 In Table II, various predictors are shown. Duration of illness was significantly higher in the C4-C6 group (33.5 months) than in the C0-C3 group (9.6 months) with a P value less than 0.01. Mean age was higher in the C4-C6 group (47.8 years) than in the C0-C3 group (41.8 years) with a P value less than 0.01. Also, there was a higher percentage of limbs in C4-C6 stages in male patients than in female patients. No patients in the C4-C6 group were without pain. Pigmentation/ulceration was found in a higher percentage of limbs with itchiness than in those without. Among eight variables, significant differences were observed between C0-C3 and C4-C6 groups for duration of illness, age, gender, perception of pain, and itchiness. Table III shows a comparison of symptoms between males and females. Pigmentation and ulceration were more prevalent in males than females; this was statistically significant. 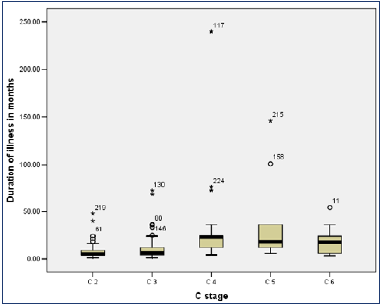 Figure 1. Duration of illness (months) according to different
C-stages. 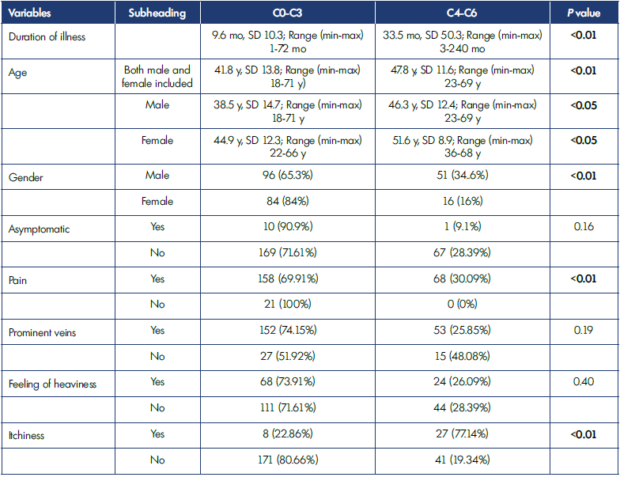 Table III. Symptoms based upon gender.

The study focused on whether gender, age, duration of illness, and symptoms such as perception of pain, skin discoloration, itchiness, ulceration, and feeling of heaviness were predictors of pigmentation/ulceration. The duration of illness, older age, male gender, and itchiness as a symptom were significantly longer, higher, or more common in limbs with pigmentation and/or ulceration. There were more male participants in our series. In a study by Nayak et al carried out in India, 82.5% of patients were male.24 In our earlier published series, there was also a predominance of male study participants.17 Differences in health-seeking behavior between males and females might be an underlying reason behind this.24

The mean age of 43.7 in our study is similar to that of other studies. For example, in a study by Maly in the Czech Republic, the mean age was also 44 years, almost the same as in our study.25 However, in our study, the mean age in males was significantly lower than that in females.

In terms of CEAP staging, the most common C classification was C3 followed by C2. In contrast, in a study by Cassou et al in Brazil, C2 was more common (50.25%) followed by C3 (23.05%)26; likewise in a study by Maly, where the most common C classification was C2 (32.3% of cases).25 The proportion of cases in C4-C6 stage (pigmentation/ ulceration) in our study was 27.5%. Overall, there were 19.4% in C4, 4% in C5, and 4% in C6 groups. The mean age among males with C0-C3 was 38.5 years and in females was 44.9 years. Similarly, in the C4-C6 group, the mean age among males was 46.3 years and in females was 51.6 years. These findings suggest either that male patients consult early or the disease itself occurs early in males. Also, as it takes time for progression of clinical staging from C1 to C6, higher age as a predictor is considered for higher clinical staging.27 In the study by Maly, the proportion of C4-C6 cases was 32.4%.25 In the earlier mentioned study by Cassou, this was only 2.2%.26 Being a tertiary care center and getting many referrals for late-stage varicose veins might be a reason behind the higher proportion of pigmentation/ulceration. In our earlier published study involving 533 limbs, the percentage of pigmentation and ulceration was 50.2%.17 Compared with patients from 2013-2018 in earlier-published work, the proportion observed with pigmentation/ulceration in our study has decreased (2018-2019).17

Major predictors of pigmentation/ulceration in varicose veins were identified as duration of illness, gender (male), history of pain, and itchiness. The study by Liu et al also identified gender and duration of illness as predictors for increased size (diameter >2 cm) of venous leg ulcer.27 Studies aiming to identify predictors of ulceration usually include analysis on the presence of deep-vein thrombosis, smoking, obesity, calf-muscle power, level of physical inactivity, etc. A study carried out in the UK suggested deep-vein thrombosis, smoking, obesity, restricted ankle movement, and calf-muscle-pump power predicted ulceration.28 As the cases included in our study were those subjected to radiofrequency ablation of the great saphenous vein, there were no cases with deep-vein thrombosis, as radiofrequency ablation is usually not done in such cases. In a study by Abelyan et al, important risk factors for ulceration were found to be post-thrombotic syndrome (odds ratio of 14.9), reflux in deep veins, history of leg injury, and physical inactivity. In that study, stages C1 to C4 were included in a control group and C5 and C6 were included in the case group.2

Large-scale studies to delineate other predictors of pigmentation/ulceration, such as familial/genetic causes, calf-muscle power, and range of ankle movement also need to be done.28-30 Our study focused on identifying predictors in terms of symptomatology, duration of illness, gender, and age, which have not received much previous study.

In conclusion, we found duration of illness, gender and symptoms of pain and itchiness as predictors for pigmentation/ulceration in varicose vein patients. Larger studies are required to help know cutoff points for some predictors. Knowing high-risk groups helps in early intervention to prevent ulceration/pigmentation that will decrease the disease burden.