Pelvic congestion syndrome (PCS) is a multifactorial medical condition that is characterized by the absence of specific symptoms, and therefore, it needs very precise imaging for an accurate diagnosis. Diagnostic techniques can be noninvasive (duplex ultrasound) or minimally invasive (magnetic resonance, CT, and phlebography). Duplex ultrasound is regarded as a first-line investigation for PCS because it is noninvasive, easily accessible, and inexpensive. This procedure provides essential hemodynamic information, and when combining transvaginal and transabdominal approaches, it could determine the presence of venous dilations, reflux, and compressions. Cross-sectional imaging techniques, such as CT or magnetic resonance scans, are often ordered for abdominal pain, which shows venous varices in the area of the uterus or the pelvis. CT can exclude other pelvic pathologies. In comparison with CT, magnetic resonance venography is superior due to the absence of radiation. Catheter-directed retrograde selective venography or phlebography is the “gold-standard” method for the diagnosis of pelvic venous pathology, in all the variations according to the need. Phlebography confirms the diagnosis and assesses the venous anatomy, especially the collateral venous systems, and it is useful when planning embolization and coil selection. In addition, this procedure is usually performed at the same time as the treatment, with consequent benefits for both patients and physicians. The correct diagnosis of PCS is essential when choosing a treatment option, especially due to the high number of underdiagnosed cases.

Pelvic congestion syndrome (PCS) is often underdiagnosed. Therefore, it is necessary to develop a greater awareness among physicians to make a proper diagnosis, to eliminate other pelvic or urological pathologies, and to accelerate treatment (Figure 1). Today, many methods are available to study abdominal pelvic veins by imaging that can give us useful information about potential venous anomalies. These techniques could be separated into noninvasive and minimally invasive investigations, which is dependent on whether catheterization is necessary or not. 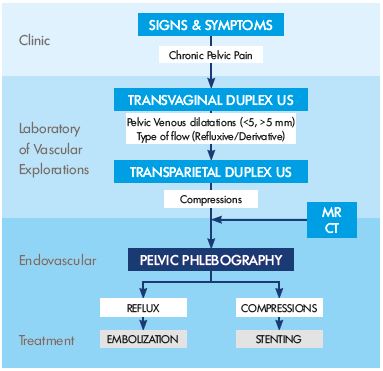 A vascular explorations are an essential element in the diagnosis and follow-up of venous disease through noninvasive methods. These noninvasive techniques provide highly reliable and sensitive data on the degree of venous stasis and the permeability and degree of valvular sufficiency in superficial and deep venous systems.1-3 These techniques can be used to: (i) determine the existence of venous disease, where it is located, and the level of hemodynamic compromise; (ii) diagnose the disease in the early stages in asymptomatic patients of high-risk populations; (iii) identify subclinical venous disorders; and (iv) monitor and evaluate surgery, sclerotherapy, embolization, or medical treatment.

The main instrument is duplex ultrasound. Duplex ultrasound is based on the Doppler effect, which is the change in the frequency of a wave when it bounces off a moving surface, such as blood flow. The device generates and transmits ultrasound waves (not using radiation) through the tissue, that bounce on structures and return to the probe, with a difference in the frequency that is proportional to the speed of blood inside the vessels, providing conversed graphic, acoustic, and colorimetric signals.

Duplex ultrasound scans provide essential hemodynamic information. Duplex ultrasound can determine the direction and speed of blood flow, and it can assess possible obstructions within a vessel. The main problem of ultrasound investigations is that it is completely dependent on the observer; therefore, it is necessary to have specific training to determine all the pelvic venous structures.4,5 The most appropriate way to investigate pelvic veins by ultrasound is to combine both transvaginal and transabdominal approaches.

Transparietal duplex ultrasound
The diagnosis of a compressive syndrome that causes PCS is performed using a transparietal duplex ultrasound, which is essential in morphological studies of the left renal vein and its hemodynamic behavior across the aortic-mesenteric fork. In PCS, transparietal duplex ultrasound can detect pelvic varices and the presence of reflux during a Valsalva maneuver. It can show a possible increase in the flow rate or the reversion of that flow through the left gonadal vein. The flow for an insufficiency pattern is of slow velocity, frequently with dilatation, venous stasis at rest, reflux (lasts more than 1 second), and an increase in velocity with the Valsalva maneuver. It is produced in cases of valvular incompetence of ovarian or internal iliac veins, and it is frequently seen in women with three or more pregnancies. The flow for a derivative pattern is of high velocity at rest (usually ≥5 cm/s), with morphologic dilatation, no visible reflux, and no reduction in flow velocity with the Valsalva maneuver. It is seen in venous obstruction cases (as occurs in May-Thurner or Nutcracker syndrome and thrombosis or anomalies of the iliac or the cava vein).

The location and disposition of pelvic veins in the abdominal cavity is very complex. Therefore, noninvasive techniques fail to provide complete anatomical and hemodynamic maps, and it is necessary to resort to other methods.

Computed tomography
Computed tomography (CT) is a minimally invasive method that allows detailed examination of the blood vessels and other adjacent anatomical structures (bones, muscles, organs, etc) without performing a catheterization. CT consists of a multislice helical scanner (64-slice) that provides both continuous high-speed data acquisition in the study area, which is a fast scan that involves a small amount of radiation, and high-quality 3D reconstructions. CT data can be analyzed with specific computer programs, and it can provide a complicated 3D visualization of the relationships between different organs. Therefore, it provides very specific information on the anatomical details, but it has the inconvenience of radiation exposure for the patient. Reflux of the contrast material to the left renal vein generally occurs in the cortical-medullar phase, ie, the arterial phase. When the contrast material is injected into the arterial system and the renal veins (in the arterial phase), simultaneous opacification of the ovarian veins shows ovarian vein reflux.9 CT is often ordered for abdominal pain, which shows venous varices in the area of uterus or the pelvis. In addition, careful review of the images often shows a large, dilated ovarian vein. On CT, the varicosities are denser than other abdominal veins on postcontrast imaging.

Magnetic resonance angiography
Magnetic resonance angiography is a diagnostic method for obtaining high-quality images without using x-rays. The images are obtained by exposing the patient to a magnetic field with radiofrequency waves that provide both 2D and 3D images of internal organs. Magnetic resonance angiography provides images of blood vessels without contrast administration. It is a minimally invasive technique, and magnetic fields do not cause tissue damage. It is mainly used to study arterial disease, but it is a very useful test to diagnose vascular malformations when it is essential to assess a possible involvement of muscle planes. It is a straightforward and quick (only 20 minutes) procedure. Complete anatomical information is obtained, which can be accurately assessed at different levels and even in 3D, with no x-rays, catheterization, or iodinated contrast. Pelvic varicosities are identified as enlarged tortuous tubular structures in the trajectory of the ovarian veins, around the adnexa, and in the pelvic floor. Pelvic varices can be visualized effectively in 3D magnetic resonance sequences after the administration of intravenous gadolinium, and flow in the pelvic varices appears with high-signal intensity. Furthermore, the renal veins can be assessed for signs of compression (eg, Nutcracker syndrome), and the common and external iliac veins can also be evaluated.10

Pelvic selective phlebography
Pelvic selective phlebography is the “gold-standard” technique to confirm a pelvic diagnosis. Phlebography is a radiological technique that involves the opacification of a preselected territory of the venous system for radiographic imaging by injecting intravenous contrast medium.11,12 The study is performed on a remotely controlled tilt table under fluoroscopic guidance. It is the best procedure for topographic study, and traditionally, it is considered the most reliable method for diagnosis. This study involves inserting a catheter into a vein at the elbow to navigate to the veins of the abdominal and pelvic area, and then dye is injected to obtain high-quality morphological images, even in 3D. This technique can measure pressure gradients, which provides valuable information about the extent of the pelvic venous pathology, and it can provide morphological information on the veins of the abdomen (ie, iliac veins and the inferior vena cava). It takes place in an ambulatory regime, with no need of hospitalization. The main advantage of this diagnostic procedure is that it is possible to perform the treatment in the same procedure. The main protocol begins with the catheterization of the left renal vein, with simultaneous pressure gradient measurements to investigate for the Nutcracker syndrome. Then, the catheter is moved to the left iliac vein, to do the same for the May-Thurner syndrome. After that, gonadal veins and, finally, internal iliac veins, are investigated. Diagnostic criteria for PCS are the presence of dilated gonadal veins, contrast retention or reflux, congestion of the pelvic venous plexus, or filling of vulvovaginal varices or lower limb leaking points and varicosities.5,13 The finding of an insufficient gonadal or iliac vein is typically followed by the corresponding treatment.

Ascending phlebography
The ascending phlebography provides an image of the leg veins after contrast dye is injected into a vein in the patient’s foot. The patient is placed standing; then nonionic contrast media is manually injected at an estimated dose of 100 cc per limb. An anatomical map of the superficial and deep venous systems is obtained, then the patient is quickly moved into a Trendelenburg position and radiography is performed on the iliac-vena cava sector.

Varicography
Varicography is a modification of the ascending phlebography procedure that is used mainly in patients with recurrent pelvic varices or venous insufficiency. The procedure involves direct catheterization of a varicose area to accurately assess the morphology, extension, drainage channels, etc.

Descending phlebography
The descending venography provides more functional and morphological information on the venous system. It is a complement to the study of the pelvic vascular axes. Descending phlebography is performed by catheterization of the right basilic vein, as a complementary study to selective angiography of the pelvis. It can assess the degree of insufficiency in the deep femoral systems and study recurrent varicose veins of the saphenous-femoral confluences. After exploring and treating the ovarian and hypogastric axes, the catheter is retrogradely moved into the saphenofemoral junction. After injecting contrast during a Valsalva maneuver or standing if a tilt table is available, graphical information is obtained on the valvular competence of the deep venous system, checking for the possible reflux of venous axes. Saphenous systems are also assessed to look for postsurgical varicose recurrence in the saphenofemoral junction, selectively channeling those varicose pedicles for its study.11,12 Descending phlebography was formerly used for studies on the venous valve system; however, now this valve system is typically assessed by Doppler ultrasound, and descending venography is indicated as a complement pelvic study.