The aim of this article is to convince phlebologists that intravascular ultrasound (IVUS) eases and improves the making of venoplasty and stenting of iliac and caval vein obliterations. First, the article will describe the IVUS system, ie, it is a system containing a probe catheter, a control, and a tower and it records data. Then, the article will discuss the procedure technique in depth from probe insertion and positioning up to the segment to be examined and the slow pull back from the proximal to the distal site. Lumen measurements are made on recorded images. Finally, this article will detail the information provided by IVUS, including how this investigation is crucial for stent choice, positioning, deployment, and postprocedural control.

In recent years, the endovascular technique, by means of venoplasty and stenting, has become the first-choice interventional treatment for outflow obstruction in patients affected by chronic venous insufficiency caused by postthrombotic syndrome or a primary obstruction (nonthrombotic iliac vein lesions).

After the first series of vein stenting in chronic outflow obstruction, published by Neglen et al,1,2 the angioplasty/stenting technique in veins has been progressively ameliorated and finally standardized. More recently, new venous-dedicated stents have been delivered to the market, thus providing a possible solution for many of the issues related to the specific venous system characteristics. Moreover, data regarding the clinical outcomes after outflow obstruction correction are available today.3,4 In a recent review of the literature, significant clinical improvements in chronic venous insufficiency severity were detected by evaluating both validated measurement scores and venous disease–specific quality of life; even if the quality of evidence indicating outflow obstruction treatment is still weak, the procedure is very promising and safe.5

Nowadays, it can be stated that venoplasty is a well-consolidated procedure in terms of both technical knowledge and expected clinical results. On the other hand, patient selection for outflow obstruction treatment is still a critical issue. In fact, quantifying the hemodynamic role of vein stenosis is currently not possible: a resistance index has still not been validated, and, consequently, we can measure an anatomic degree of stenosis and not the entity of obstruction. This limit appears to be stronger when a primary obstruction has to be confirmed or excluded. Thus, indication for treatment is mainly based on the clinical assessment of the patient and on diagnostic imaging (venography, venous CT, venous MRI). Historically, venography has been considered the gold-standard diagnostic method in identifying chronic deep venous alterations, while CT and MRI still present some difficulties in both feasibility and interpretation. The role of intravascular ultrasound (IVUS) in the examination of deep veins was identified at the very beginning of the interventional endovenous experience.6 Moreover, subsequent experiences showed its possible superiority over venography.7 In fact, while venography is essentially multiplanar, IVUS gives a full circumferential view of the vein lumen, thus it is adapted better for the elliptical and flattened shape of the vein lumen. In postthrombotic syndrome, the endovenous and parietal fibrotic damage is clearly shown by IVUS, meaning that the anatomic complexity, webs, spurs, and double channels, etc, are easily detectable so that the full extension of the lesion can be identified and treated. In order to define the real role of IVUS in the diagnosis and treatment of outflow obstruction better, a trial has been undertaken. The VIDIO study (Venogram Versus Intravascular Ultrasound for Diagnosing and Treating Iliofemoral Vein Obstruction) was a multicenter, prospective, single-arm study that enrolled 100 patients and compared IVUS and multiplanar venography. IVUS proved to be significantly more sensitive than multiplanar venography in identifying and characterizing venous stenosis, changing the treatment plan in 57 out of 100 patients.8 Despite these good results, leading to defining IVUS as the gold-standard technique in obstruction treatment,9 data regarding possible improved clinical outcomes due to this diagnostic application are still required in order to set IVUS as a mandatory procedure even if this is already happening in daily practice.

System
At present, the available IVUS system is the Visions System (Philips Volcano), which consists of a tower equipped with a disposable ultrasound probe. The transducer utilizes a 64-element cylindrical array, which is placed circumferentially on the tip of a disposable over-the-wire probe, generating real-time imaging. The catheter probe usually utilized in veins works on a 0.035” platform and requires a minimum 9 Fr indwelling sheath. Radiopaque markers at 1-cm distances are present over 20 cm of the catheter-shaft length (Figure 1). 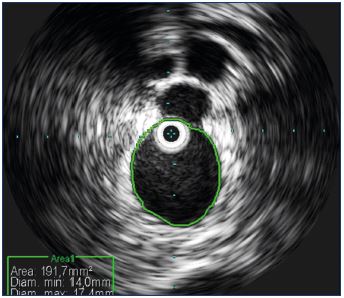 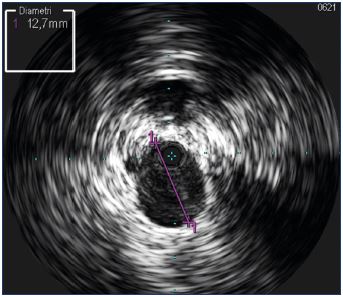 Figure 2. A probe inserted into the common iliac vein, where
the width of the window (diameter) is a maximum of 6 cm.

IVUS gives B-mode, low-resolution imaging, without a coupled spectrum analysis, meaning that we can obtain morphologic and anatomic information with this technique, but not data regarding flow. The widest window using 0.035” probe is 6 cm. Usually, this width allows the contents and the wall of the vessel the probe is in and some of the closer structures to be examined (Figure 2). When the probe is placed in the inferior cava, considering that the diameter rarely exceeds 3 cm, the vessel can be seen completely. Poor information is given about the surrounding tissues, even if some tissues, such as the liver are clearly identified (Figure 3). The probe catheter is connected to the tower using a specific probe connector hooked to the angiosuite bed. Patient data should be registered in order to proceed to examination and recording. Operations on the tower keyboard can be done by the surgeon himself using a sterile keyboard cover or by a nonscrubbed technician. 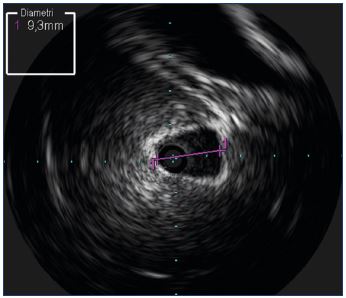 Figure 3. A probe inserted into the inferior cava at the hepatic
level.
The typical echogenicity of hepatic tissue is clearly visible.

Exam
In procedures for the treatment of outflow obstruction, the cava and the iliofemoral segment should be examined. The probe is inserted over a wire, preferably stiff, and pushed up to the district to be examined. The access site can be popliteal, jugular, or more frequently, femoral. Navigation proves quite easy due to a low profile tip, while the torsion control is poor. It is sometimes difficult to maintain a stable orientation of the probe. In order to avoid imaging artifacts around the probe, the “ring down maneuver” should be performed. This maneuver corresponds to a still image captured in a complete hypoecogenic area (blood) around the probe tip. Usually the probe tip should be in the right atrium during venous examinations in order to obtain a good reduction in the number of artifacts (Figure 4). Once the ring-down maneuver is performed, it will remain effective until the probe is connected to the tower, so the whole procedure can be done with a single ring-down, even if the probe is taken out of the vessel and inserted again. 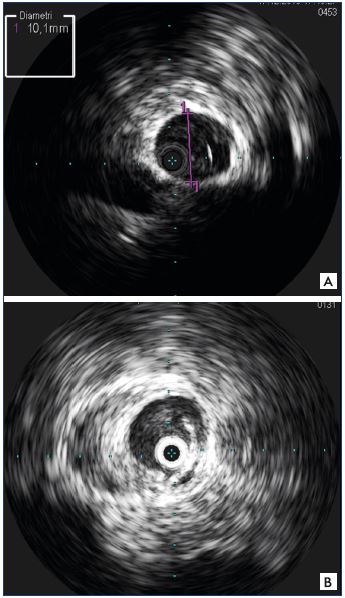 To proceed with the examination, the probe is placed up to the segment to be examined and then a craniocaudal pullback maneuver is performed, usually with simultaneous registration. To obtain an exhaustive imaging set and a better postprocessing of the registered exam, the pullback maneuver should be slow. Measurements can be done on the recorded images, selecting the adequate image. The lateral bar, which gives a longitudinal view of the explored vessel, cannot be used to take longitudinal measurements because the manual pullback maneuver is not standardized and consequently image acquisition is not at a defined distance.

Provided information
IVUS imaging provides quite clear images of the vessel wall and of the vessel content, even if higher-resolution imaging would be helpful. The vessel wall structure (Figure 5), the lumen shape (Figure 6), and the vessel content are clearly shown. In patients with postthrombotic syndrome, the intraluminal fibrosis is very irregular and variable (Figure 7) and IVUS helps identify lesions that are rarely detected by venography (Figure 8), showing the different morphology of postthrombotic syndrome lesions (Figure 9).

In primary obstruction, the vein stenosis is clearly visible even during a Valsalva maneuver. In cases of nonthrombotic iliac vein lesions, IVUS is able to measure quite precisely the stenosis and, consequently, given that the hemodynamic significance of a vein stenosis has been defined as a 50% reduction in the lumen, this diagnostic technique is able to confirm/exclude the pathology.8 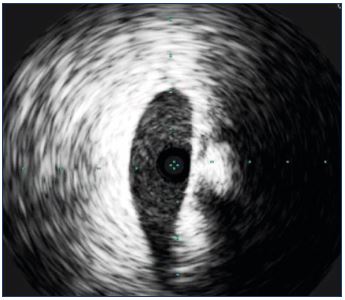 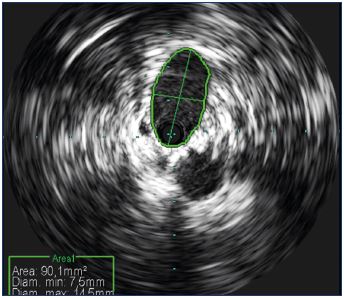 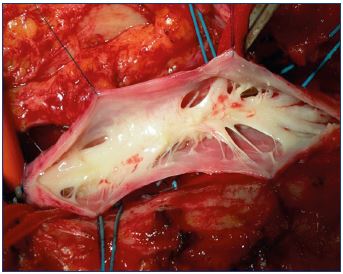 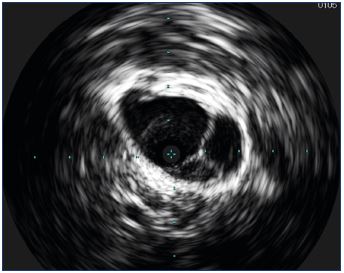 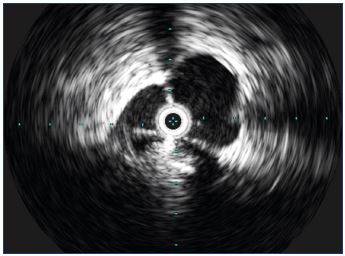 Considering the oval shape of the veins, diameter is not the best measurement to take (Figure 10) and it is better to rely on section area measurements (Figure 11). Automatic calculation of the stenosis percentage can be performed automatically, comparing the lesion image with the reference vessel (Figure 12). Once the lesion has been identified fully and ballooned, stent sizing can be adequately performed knowing the vein diameters and area. The final outcome can be assessed by IVUS, which helps determine if the stent is expanded correctly and if the lesions have been corrected completely (Figure 13). 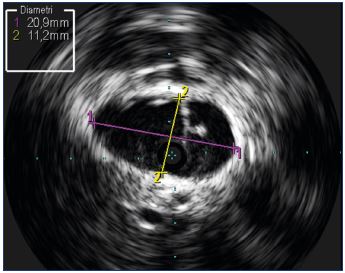 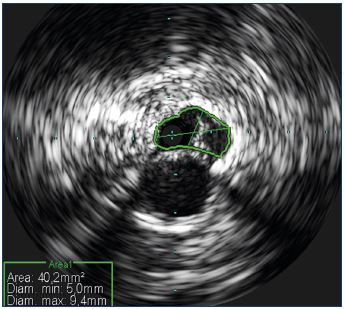 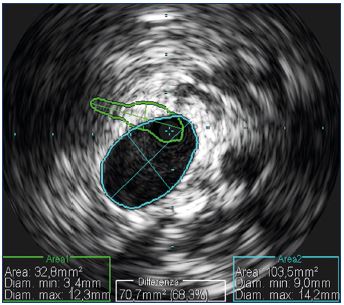 Figure 12. Calculation of the percentage of stenosis. 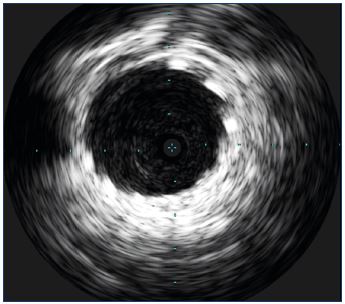 IVUS is a powerful diagnostic tool allowing for a better understanding of venous lesions when compared with other imaging techniques, such as venography, CT, and MRI. IVUS examinations provide a precise morphologic measurement of the vein stenosis and consequently ensure a correct stent sizing and deployment. Moreover, in a period of increased attention to radiation risk, this technique strongly reduces the amount of radiation and contrast dye injected. Despite the fact that the technique itself needs to be improved in terms of imaging quality, provided information, evidence ofeffectiveness, and costs, IVUS should be considered as an essential element during venous procedures.