Investigations in postthrombotic syndrome according to clinical status

Many angiologists and vascular surgeons consider that postthrombotic syndrome (PTS) should only be managed noninterventional treatment. Unaware of the real possibilities provided by operational treatment, they limit investigation to color duplex scanning (CDS), which in this perspective is logical and reasonable. Compression, drugs, and lifestyle recommendations do not call for level III investigation according to the CEAP classification.1

Conservative treatment as far as etiology is concerned relies mainly on the signs and symptoms, independently of the location, extension of anatomical lesions, and pathophysiological abnormality. Conversely, when surgical or endovenous treatment is considered, the CEAP A and P descriptors must be defined precisely and the severity of PTS as a whole must be evaluated by accurate and informative investigations.

AIM OF THE ARTICLE

To provide guidelines for undertaking investigations according to the patient’s clinical presentation.

These investigations have been recently defined in special issues of the Journal of Vascular Surgery and International Angiology.2,3

3. Investigations providing information on the microcirculation:
– They are not used in daily practice.

INDICATIONS FOR INVESTIGATIONS ACCORDING TO CLINICAL STATUS

1. In patients presenting PTS with few symptoms and without moderate or severe edema according to venous clinical score4 and/or skin changes, investigations can be limited to CDS. The same policy is recommended at follow-up visits when the patient is stable with or without compression.

2. When a patient compliant with suitable compression therapy is still symptomatic—persisting severe pain, venous claudication—or presents with severe edema, progressive worsening skin change, or recurrent ulcer, standard CDS should be completed by complementary investigations in the absence of severe systemic disease or when calf pump function cannot be improved (stiff ankle, calf muscular atrophy). The following investigations should be undertaken in order. 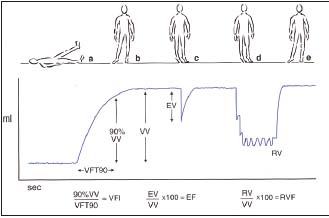 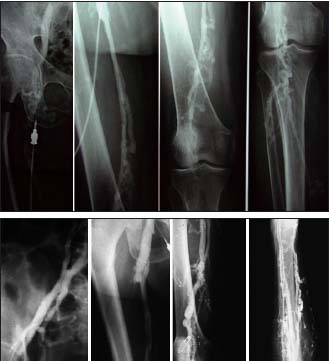 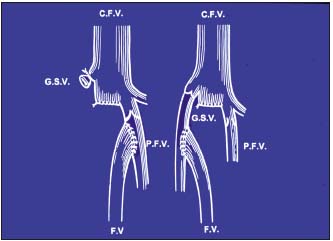 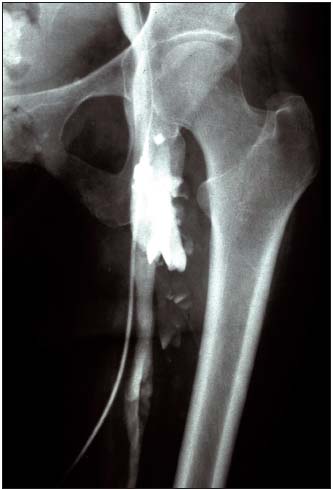 • To evaluate hemodynamics by means of air plethysmography (Figure 1) and ambulatory venous pressure (Figure 2), but neither provides information on anatomical disorders or pathophysiological mechanisms.

• When deep reflux is identified by CDS and ascending and descending venography is decided, ascending phlebography identifies the postthrombotic changes in the deep system and the collateral patterns. Descending venography determines, first, the extent of the reflux, which is crucial for determining whether deep venous reconstructive surgery is needed as only axial reflux has to be treated (Figures 3, 3b), and, second, what kind of surgery is feasible:
– Femoral vein transposition (Figure 4) to the great saphenous vein or profunda vein, insofar as its proximal valve is competent5 (Figure 5), knowing that valvuloplasty is rarely feasible in PTS
– If transposition is not feasible, phlebography combined with ultrasound scan provides information on the most suitable site for performing valve segment transplan tation6 (Figure 6) or neovalve construction7 (Figure 7). 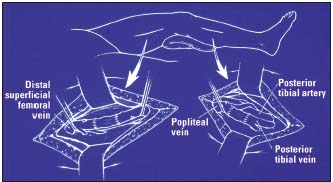 Figure 6. Valve segment transplantation
Transposition to the popliteal vein above and below the knee.

By Courtesy Prof Maleti (Italy)
Figure 7. Neovalve construction according to Maleti’s technique
Left: typical appearance of a postthrombotic vein after axial phlebotomy
Right: a monocuspid valve has been constructed with the thickened vein wall

• Quantification of venous obstruction is not easy. Traditional methods measure arm-foot pressure differential,8 outflow fraction,9 and outflow fraction resistance by plethysmography (Figure 8),10 but their specificity and sensitivity are inconsistent11,12 and they do not quantify local anatomic distribution.

• Iliocaval obstruction is not always identified by femoral vein pressure measurement and phlebography, as both can underestimate its severity.13 According to Neglen and Raju, intravenous ultrasound is more reliable (Figures 9-11),14,15 but is invasive and expensive. 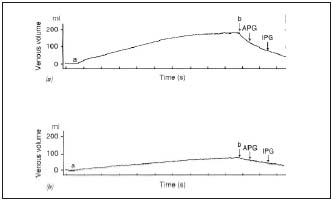 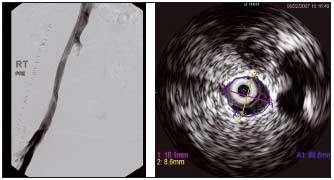 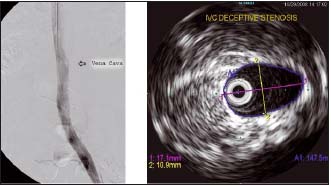 The value of spiral computed tomography and magnetic resonance imaging is not yet clearly established.

• There is no reliable investigation for identifying infrainguinal obstructions since, as in iliocaval vein obstruction, phlebography is not reliable (Figure 12).

Some patterns need to be described:

– In severe PTS of the lower limb, the entire outflow seems to occur through the superficial system with nonvisualization of the deep system. This is a technical artifact despite the use of tourniquets.

– When the femoral vein is occluded, the profunda enlarges leading to axial transformation of the profunda femoris vein (Figure 13).16 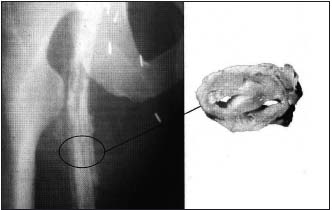 Figure 12. Left: Ascending venography
Intraluminal trabeculations are apparent, although the vein appears to be patent.
Right: Venous pathology. The vein lumen is reduced to 2 narrow channels.

Fortunately, collateral formation seems to compensate better for femoro-popliteo-crural venous obstruction than for obstruction of the iliac and common femoral veins. Furthermore, there is no efficient treatment of infra-inguinal venous obstruction, although good results with endophlebectomy have been reported in a small series of patients.17

3. In PTS, obstruction and reflux are frequently associated and unfortunately there is no investigation that identifies the most important pathophysiological factor. Nevertheless, the consensus is to treat first iliocaval obstruction, when combined with below inguinal reflux, as the successful treatment of the former generally improves the latter.

Investigations in PTS must be tailored to the clinical situation and undertaken according to the planned treatment. Medical angiologists must realize that surgery and endovascular procedures can improve severe PTS not stabilized by conservative treatment.7,15 knowing that the key for to successful operative treatment is thorough investigation performed by a skilled and trained unit.