Clinical and laboratory evidence confirm that in chronic venous insufficiency (CVI) there is microangiopathy of the lymphatic network. The resulting lymphatic dysfunction leads to chronic edema which complicates the clinical picture of severe CVI. Optimum management requires measures to improve lymphatic drainage as well as attending to the venous disease. Exercise, elevation, and compression are principles of treatment effective in both pathologies.

The veins and lymphatics have a similar embryological origin and anatomy. When pathological changes occur in the venous system, there are microangiopathic changes of both the vascular and lymphatic networks. The loss of lymphatic function allows the development of edema, which is commonly seen in severe chronic venous insufficiency. The edema complicates management, particularly if ulceration has occurred. Management of venous disease and lymphatic dysfunction is based on similar principles of exercise, elevation, and compression.

The lymphatic system is organized into a one-way drainage system to allow re-circulation of tissue fluid, macromolecules and immunologically active cells back to the vascular compartment. If there is excessive demand on the lymphatics, or a congenital or acquired abnormality of the lymphatics, there is a loss of tissue fluid homeostasis. This allows edema to develop, which can be recognized clinically and is a feature of severe chronic venous insufficiency (CVI).

ANATOMY AND PHYSIOLOGY OF NORMAL LYMPHATICS

Evidence exists that the venous and lymphatic systems share a similar embryological origin. The first lymphatics to appear are lymph sacs which arise from nearby major veins. The VEGFR3 gene is found expressed in venous and lymphatic (not arterial) endothelia at 12.5 days of development, but is subsequently only expressed on developing lymphatic vessels, and in the adult on lymphatic endothelia and high endothelial venules.1
The lymphatic system is composed of an intradermal network of initial lymphatics which drain into precollecting lymphatic vessels. The initial lymphatics are blind-ending endothelial tubes with open intercellular junctions, which allow the entry of fluid if the interstitial pressure is greater than the intraluminal pressure. However, these intercellular junctions close if intraluminal pressure exceeds interstitial pressure, avoiding the egress of collected lymph. At this level, fluid movement is effected by local pressure gradients and mechanical forces, such as massage and intermittent contraction of skeletal muscle.2
The precollecting vessels drain into muscular collecting vessels running up the limbs in close association with the major blood vessels. These lymphatic vessels are lined by smooth muscle and are intrinsically contractile, in contrast to veins. At this level, the contractility acts as the major source of lymph propulsion.3 All lymphatic vessels larger than the initial lymphatics possess valves which act to prevent reflux of fluid.
The anatomy of the lymphatic system sets up a one-way drainage system to allow the return of fluid and macromolecules from the interstitium to the circulation to maintain tissue homeostasis. In effect, this is a safety valve preventing interstitial edema. The lymph also contains immunologically active cells such as lymphocytes and macrophages, and antigenic organic material such as bacteria. The recirculation and presentation to lymph nodes of these components means the lymphatic sytem also has a vital immune surveillance role. In the leg, there are superficial and deep lymphatic systems divided by the deep fascia (in parallel to the venous system). The superficial compartment drains to the groin following the course of the long saphenous vein. One to two lymphatic trunks will arise from the heel and follow the course of the short saphenous vein to the popliteal fossa. The deep system drains the muscles, bones, joints, and fascia by trunks running in close association with the deep veins.

THE ROLE OF THE LYMPHATICS IN NORMAL TISSUE
FLUID HOMEOSTASIS

The traditional view is that most of the filtrate provided by the arterial capillaries is continuously reabsorbed by the downstream venous microvessels where pressure is normally low, leaving behind a small concentrated fraction of the original filtrate to drain away as lymph. There is now considerable evidence against this concept. In the steady state, combined interstitial hydrostatic and osmotic pressures measured directly in the human arm never reached levels sufficient to overcome filtration.4 These results are just one of many data sets obtained from a variety of tissues and species in which summation of the Starling forces (see below) reveals no net reabsorption in venous capillaries.5 In most tissues, lymph is produced by a net filtration force that dwindles along the longitudinal axis of the blood capillary. Tissue fluid balance, therefore, depends crucially on lymph flow. In circumstances where capillary pressure is raised, eg, venous hypertension, the role of the lymphatics is even more important.

THE PATHOPHYSIOLOGY OF EDEMA AND VENOUS
INSUFFICIENCY

Balance is lost if venous insufficiency leads to an overwhelming increase in the capillary pressure. If inflammation occurs concurrently with the venous insufficiency, eg, cellulitis, stasis dermatitis, lipodermatosclerosis, this may lead to an increase in capillary permeability to water (Lp) and proteins (o.) and increased blood flow (further increasing capillary pressure).
When there is a net rise in capillary filtration, the lymphatic system “safety valve” must respond with an increase in lymphatic flow to avoid edema. In venous insufficiency, this has been illustrated by both lymphography and lymphoscintigraphy.6,7 This is likely to be the main buffering system against edema formation. An anatomical mechanism already present to buffer gravitational fluid loading is the increased lymphatic density and lymphatic transport capacity of the leg in comparison with the arm in healthy subjects.8

In a clinical study of 56 patients with venous ulceration in both community and hospital settings, edema was present in 55% of ulcerated legs. The clinical changes of lymphatic insufficiency, principally an inability to pinch a fold of skin at the base of the second toe (Stemmer’s sign), hyperkeratosis, and increased skin creases, were present in 22% of ulcerated legs.9 This provides clinical evidence that in severe CVI with ulceration, the lymphatics become compromised and edema, eventually with skin changes, supervenes.
Fluorescence microlymphography undertaken in patients with severe CVI compared with healthy controls demonstrated obliteration of parts of the lymphatic superficial capillary network, cutaneous reflux of lymph from deep to superficial channels, and increased lymphatic capillary permeability.10,11 This is evidence that in CVI there is lymphatic microangiopathy in association with the microangiopathy of blood capillaries.
Quantitative lymphoscintigraphy, which provides a measure of lymphatic function, has been studied in patients with chronic venous leg ulceration and compared with healthy controls.12 This study showed a significant decrease in lymphatic function in ulcerated and nonulcerated limbs of patients under 65 years old compared with healthy control limbs. The study also demonstrated a significant reduction in lymphatic function with age. This may explain the increased morbidity from venous ulceration in elderly patients.
Morphological studies on skin biopsies taken from patients with CVI demonstrate structural changes in dermal lymphatic vessels. There is collapse of lumina of intradermal lymphatics, loss of the open intercellular junctions, and damage to the anchoring filaments which maintain the lymphatic vessel open.13 As described above, these features lead to the loss of the normal one-way transport mechanism of the initial lymphatics and consequent impairment of lymphatic function. In severe CVI, lipodermatosclerosis may occur with ulceration. A morphological study in lipodermatosclerosis has shown a complete absence of lymphatics in the ulcer bed and a marked decrease in the number of lymphatics surrounding the ulcer. In association, there was destruction of the endothelium and muscle lining of lymphatics present.14
Therefore, there is clinical and laboratory evidence that with the pathological changes in blood vessels due to CVI, there is concomitant pathology in lymphatics which lead to a deterioration in lymphatic function.
In addition, lymphatic function may be compromised due to congenital or acquired factors. A primary reduction in the number of lymphatics, similar to an elderly patient, may compromise lymphatic function and allow edema to appear more quickly in CVI. Operative procedures, for example varicose vein stripping, may also lead to lymphatic obliteration and functional compromise. Cellulitis, which may cause lymphangitis, can similarly disrupt lymphatics, probably by lymphatic vessel occlusion. Any process leading to lymphatic dilatation or luminal destruction can create lymphatic valvular insufficiency and lymph reflux, analogous to the loss of venous valve function in CVI. The intrinsic contractility of lymphatics is vital to lymph flow, particularly with lower limb immobility and loss of this contractile mechanism is likely to play a major role in lymphatic failure and tissue edema.15
In summary, a number of associated factors may occur together with the pathological lymphatic changes associated with CVI to explain the common occurence of edema in CVI.

THE IMPLICATIONS OF LYMPHATIC DYSFUNCTION

The presence of edema complicates the management of CVI and particularly venous ulceration. Edematous tissue will lead to increased exudation from wounds which will macerate and damage the skin surrounding ulcers, impairing wound healing. The presence of edema is associated with longer duration of ulcer.9 Dressings will need to be changed more often, necessitating an increase in resources.
Moist dressings and macerated tissue are also an ideal environment for proliferation of microbes, which may lead to infection and the concomitant inhibition of wound healing. The inflammation in association with infection will increase capillary permeability and produce tissue factors, which further increase the load on the lymphatics, setting up a vicious circle.
In the setting of chronic edema, hyperkeratosis, papillomatosis, and eventually fibrosis (elephantiasis) occur. This increases the debris from the legs and creates an increased surface area with sanctuary sites for microbes, further increasing the risk of superinfection.
The lymphatic dysfunction means a loss of the immune surveillance role in the affected limb. This sets up a localized immunodeficiency and is the likely reason for an increase in cellulitis in patients with lymphedema but not venous disease. As described, cellulitis can lead to lymphatic destruction, and further compromise lymphatic function.
Squamous cell carcinoma (SCC) is a recognized complication of chronic venous ulceration, although it is unclear whether this is due to chronic ulceration or lymphatic insufficiency. SCC occurs in the setting of generalized immunodeficiency, for example organ transplant recipients, and once again lymphatic dysfunction and concomitant immunocompromise may be implicated.
The practical result of an increase in tissue fluid in the lower limbs of patients with CVI is “heavy legs” leading to a loss of mobility and increased likelihood of leaving the lower limbs dependent. The consequent decreased venous return and worsening of tissue edema will further perpetuate the problem.
The principles of treatment of venous disease and lymphatic dysfunction are therefore very similar. The importance of the calf pump is well recognized in improving venous return, and this will also have an impact on relieving edema. Elevation will similarly make an impact on both problems, and is vital during rest or in the setting of lowerlimb muscle paralysis.
Compression therapy in the form of four-layer bandaging is the same in principle as multilayer bandaging for lymphedema. The resultant increase in venous return and increase in stiffness of the tissues will decrease edema formation and improve lymphatic function. Once bandaging has had the desired effect, prophylactic compression hosiery will perform the same function.
The skin changes of severe CVI and the resultant chronic edema need to be avoided. Whilst attending to the primary pathology, it is important to use adequate emollients to maintain skin hydration, topical corticosteroids if required for eczematous changes, and possibly keratolytic agents for troublesome hyperkeratosis.
In the future, surgery may have a role to play particularly in the treatment of the postthrombotic limb. However, it is vital that no further damage is inflicted on lymphatics during surgical procedures.16
The ideal medical treatment for CVI would achieve both a decrease in capillary filtration and an improvement in lymphatic function. There is clinical and laboratory evidence that Daflon, a micronized purified flavonoid fraction, has these properties and is a useful adjunctive treatment in severe CVI.17 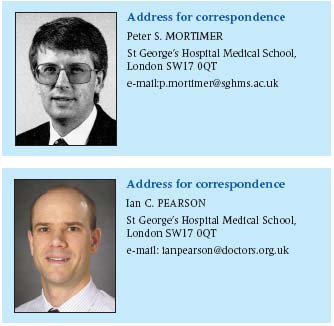