Vascular mixed ulcers are identified in about 10% of lower leg ulcers, but their prevalence is underestimated. A combination of anatomical and physiopathological venous and arterial anomalies makes their management difficult. Both must be investigated in detail to allow optimal treatment. There is consensus that when the ankle brachial index is less than 0.6, the first step should be revascularization for ulcer healing and to prevent recurrence. Conversely, when the ankle brachial index is above 0.6 there is no consensus on the treatment sequence and procedures that should be followed. If initial treatment is successful, close follow-up is strongly recommended as recurrence of vascular mixed ulcers due to revascularization failure is frequently difficult to manage.

The origin of mixed etiology leg ulcers is primarily due to chronic venous insufficiency and the ability of mixed ulcer to heal is determined mainly by the severity of the coexisting arterial insufficiency. These ulcers cause considerable pain and distress for patients and pose a difficult wound management problem for health care professionals. Accurate diagnosis of mixed arterial and venous leg ulcers is essential as compression bandages may not be suitable if there is significant arterial disease. This paper reviews the literature on the management of patients with mixed arterial and venous leg ulcers and suggests recommendations for treatment.

Chronic leg ulceration affects 1%-2% of the population. It is a major cause of prolonged morbidity and is commonly associated with delayed healing and multiple recurrences. Significant venous disease exists in over 70% of ulcerated limbs, but a variety of other etiologies have been identified.3,4 Arterial disease may coexist with venous dysfunction, but the precise prevalence of MAVLU is difficult to establish and is probably underestimated.4-6 If an ankle brachial index (ABI) < 0.8 is used as the criteria to determine MAVLU prevalence, the rate is 15% according to Marston.7 In the series reported by Bohannon et al, patients with MAVLU represented 0.08% of all discharges at two large tertiary care hospitals over a 10-year period.8 Correct and precise determination of each vascular abnormality is crucial as it allows a logical approach to MAVLU management.

The pathophysiology of MAVLU can be attributed to a combination of venous hypertension, primary or postthrombotic venous reflux and/or obstruction, and a reduction in blood inflow due to peripheral arterial occlusive disease of various anatomical locations. The mechanism of tissue damage involves a low oxygen partial pressure and the activation of inflammatory pathways. The difficulty in determining which component is predominant in venous and arterial anomalies affects MAVLU management.

Ulcer diagnosis is clinically obvious, but does not provide reliable information on etiology and physiopathology. Nevertheless, some relevant information can be obtained from reviewing the patient’s family and personal medical history, as well as by performing a physical examination to determine the ulcer features and localisation, presence of varices or venous skin changes, and absence of femoral, popliteal, or tibial pulses (Figures 1A and 1B).

The term “operative treatment” refers to open surgery and endovascular procedures and can address peripheral arterial occlusive disease, chronic venous disease (including that of the superficial, perforator, and deep venous systems), and sometimes both arterial and venous anomalies. The aim of MAVLU treatment is twofold: first, to achieve ulcer healing, and second, to prevent recurrence. When an operative or conservative treatment leads to ulcer healing, this does not necessarily imply recurrence prevention. Treatments may address the venous and/or arterial aspects of the disease depending on the outcome of clinical and physical examination findings.

When peripheral arterial occlusive disease is detected, the options for treating the arterial disease are open surgery or endovascular procedures, as recommended by the Inter-Society Consensus for the Management of Peripheral Arterial Disease (TASC II).9 In this specific group of patients, the indication for a distal bypass using an autologous vein may be limited by the availability of a functioning saphenous vein (due to varicose vein pathology and/or previous saphenous ablation).

Both compression therapy and superficial vein ablation have been performed with or without arterial procedures, but there are no data concerning deep venous surgery, either for obstruction or reflux.

Arterial disease plays a major role in the recurrence of MAVLU. Recurrence may be associated with failure of revascularization as well as progression of peripheral arterial occlusive disease. Monitoring and treatment of risk factors for atherosclerotic disease, as well as optimizing pharmacological therapy for atherosclerosis, may play a decisive role in preventing MAVLU recurrence.

Figure 1. 1A and 1B. Mixed arterial and venous ulcers

Treatment results are difficult to interpret as the decision to perform conservative and operative treatments is determined by different ABI values, and is based on the tendency of the ulcer to heal in response to conservative treatment. Some outcomes in patients with MAVLU are listed in Table 1.1,2,6,8,13-15

The first decision concerns whether or not to perform revascularization, and this is based on clinical signs, ABI, and anatomical arterial lesions. ABI is widely used to measure arterial impairment, but other parameters must also be taken into account when assessing the severity of arterial disease. These include pain at rest, tissue damage, and anatomical patterns associated with peripheral arterial occlusive disease. If ABI is below 0.6, most studies recommend revascularization as first-line treatment using either an open or endovascular procedure, depending on TASC lesion distribution and technical feasability.2,15 For ABI values between 0.6 and 0.8, data are insufficient to indicate whether revascularization should be performed before or after supervised compression therapy and/or superficial venous ablation.

Superficial axial reflux should be corrected alone or in association with other procedures. Endovascular ablation should be the first-line treatment as it is minimally aggressive. 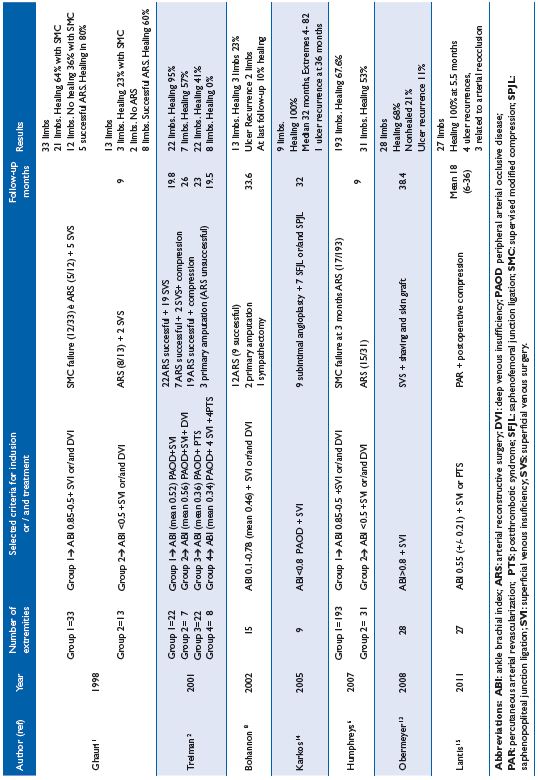 Table I. Outcome in mixed arterial and venous ulcers according to treatment.

The indication for deep venous surgery is determined by etiology (postthrombotic or not) and anatomical and physiopathological lesion distribution. However, given its complexity, surgery to correct deep venous reflux can rarely be performed in such patients. Conversely, surgical endovascular correction of ilio-caval obstruction should be considered.

Follow-up assessments should be scheduled to identify any possible deterioration in the reconstructive arterial surgery in patients presenting with MAVLU. Early detection is essential to prevent revascularization failure and the requirement for repeat revascularization, which is more complicated than primary revascularization.

If MAVLU recurs, a full diagnostic reassessment is mandatory before any new treatment is started. In most cases, progression of an arterial disease anomaly is the cause and repeat revascularization is the mandatory first step to achieve MAVLU healing and relieve patient symptomatology. When arterial revascularisation is not successful, amputation is often the only option to relieve pain.

Exceptionally, the cause of ulcer recurrence is a previously underscored venous anomaly, which in the majority of cases is related to a severe deep venous insufficiency, usually postthrombotic. In the presence of supra-inguinal obstruction, stenting should be considered, while endovascular ablation is recommended for superficial reflux as previously mentionned.

MAVLU is a challenging condition to treat and its optimal management has not been precisely established. Nevertheless, there is consensus that if ABI is less than 0.6, revascularization should be performed if possible. In daily practice, the management of MAVLU is mainly determined by individual factors.