The pathophysiology of CVI remained relatively obscure until recently, but recent advances relating hemodynamic disorders to cell biology have shed light on how its mechanisms interlink. CVI may be due to hereditary abnormalities of vessel walls or tissues, or appear to be secondary to deep vein thrombosis. However, it is usually apparently primary, with which this analysis is concerned. The cause of CVI is then related to a circle of actions, including the progression of venous hypertension (VH), leading to disturbances of blood flow and venous stasis. These two factors act on the walls of main veins and cause varicosities, and on the microcirculation, where they cause edema and ulcers.

I – VENOUS HYPERTENSION AND VENOUS STASIS

Intravenous hydrostatic pressure is high in humans: when standing, venous pressure at the ankle is 85 mm Hg and should normally drop to 45 mm Hg when walking because of the peripheral heart effect – a system incorporating contraction of calf muscles, the action of venous valves, the arteriolo-venular reflex and the action of the diaphragm. This fall in blood pressure enables blood to ascend via lower-limb veins and return to the heart. This is nevertheless a regulatory system required because of the upright position, unknown in animals (Figure 1) and which easily deteriorates with advancing age. 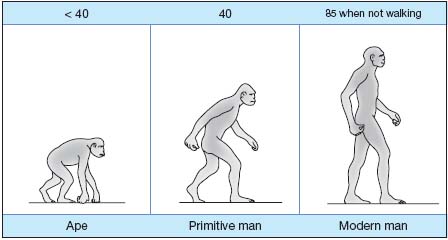 CVI and venous pressure
In CVI, venous pressure remains high and causes venous stasis in the lower limbs, with distal gravitational force active as far as the microvenules of the skin of the ankles and feet. Evidence of this disorder is found by Nicolaides’ measurement of ambulatory venous pressure (AVP) in a vein of the dorsum of the foot. In CVI, it is found to gradually increase and is not corrected by walking. It is accompanied by pain, subcutaneous fibrosis, pigmentation of the skin, and finally ulcers with which it is always associated at high values above 80 mm Hg.

Causes of venous stasis
It is now known that it is essentially anatomical changes in veins which are responsible for the persistence of high pressure and the development of venous stasis. Widening and irregularities of main vein walls result in difficult emptying when standing. In other words, it is the development of varicose veins which leads to stasis.
Aggravating factors also play an important role in these anatomical changes.

– Functional abnormalities: reduced calf ejection fraction (studied by plethysmography), of fairly late onset, is a highly aggravating factor, related to failure of the muscle pump, especially during bed rest. All the more, valvular reflux (detected by Doppler), occurring early, even before valvular incompetence, or late, at various sites in the venous system according to individuals, is a major cause of the worsening of stasis. Reflux is common: it is present in 68% of patients in the saphenous below the knee, in 55% above and in 30% at the saphenofemoral junction. Ulcer patients have severe and multisegmental reflux. Reflux is superficial and deep when edema is present.

– Hemorheological abnormalities: increased blood viscosity and red cell aggregation are present in CVI, in the systemic circulation and even more so in varicose blood vessels. These events are linked to blood levels of large molecules, especially fibrinogen. This is a typical trait of CVI.
Hence anatomical changes of venous wall and the onset of reflux and rheological abnormalities increase with time, according to age, familial hereditary circumstances, pregnancies, and long periods standing. These variable factors create inequality in the clinical manifestations of varicose veins in different groups.

Two mechanisms, shear stress abnormality and hypoxia, induce transformation and thickening of the venous wall, being responsible for biochemical changes in this structure.

Abnormalities of blood flow shear stress at the wall
When standing, venous return flow easily loses its homogeneity (Figure 2). Because of pulsations which flatten then open lower-limb veins, it is often pulsatile or turbulent, and endothelial surfaces in particular lose the influence of shear stress (5 to 10 dynes/cm2 instead of 20 to 30). This impairs mechano-transduction, the endothelium activates, opens ionic channels, decreases its nitric oxide (NO) production, increases that of endothelin 1 (ET1) and of plasminogen activator inhibitor (PAI-1). The endothelium in these regions produces cytokines and growth factors, and expresses adhesion molecules. Areas of slowed leukocyte circulation are created, especially in subvalvular regions, inducing subendothelial leukocyte transit. Macrophage monocytes and mast cells then supply the wall with the growth factors and enzymes, forming the biochemical basis of varicose veins (see below). 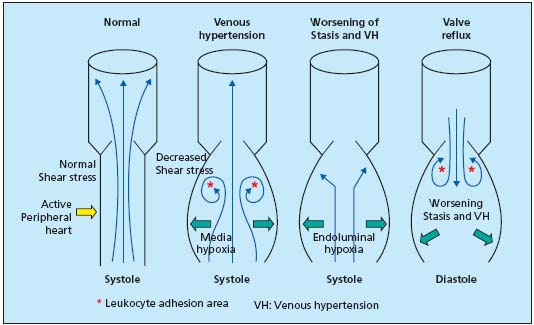 Venous wall hypoxia
When standing, the venous wall is exposed to two hypoxic situations (Figure 3). Because of centrifugal pressure due to the weight of the blood column, the vasa vasorum of the media and adventitia are crushed by the skin. This leads to hypoxia of the media, activating and differentiating smooth muscle cells (SMCs) and activating fibroblasts. During prolonged periods standing and immobile, there is demonstrable and measurable hypoxia by endoluminal stasis. It is also an activation factor, now of the endothelial lining. It is nonetheless transitory, even in patients with developed varicose veins. It is active in zones of slowed circulation, under valves, leading to the expression of leukocyte adhesion molecules, also producing cytokines, growth factors and adhesion molecules. 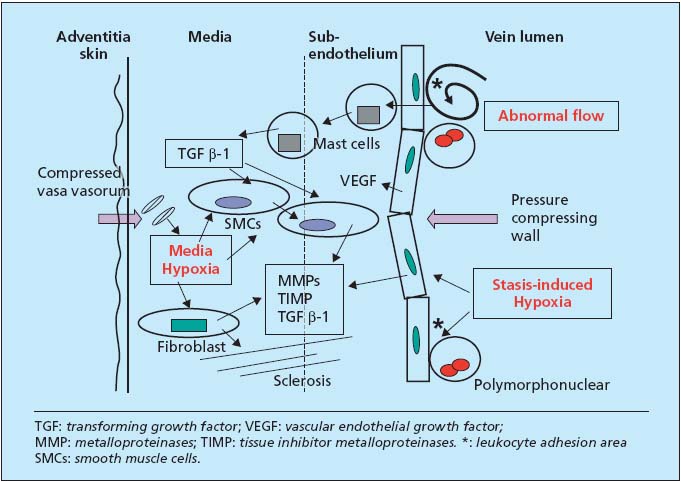 Figure 3. Three causative mechanisms and biochemistry of reorganization of the venous wall.

Biochemistry of varicose wall lesions
Because of abnormal flow, medial hypoxia, and endoluminal hypoxia, growth factors, essentially TGF â-1, are produced in or carried to the wall (Figure 3). They are transported by mast cells and produced in part by activated endothelium and SMCs themselves. The latter, dedifferentiated to secretory cells, migrate to the subendothelium, which they thicken. Fibroblasts multiply and secrete more zincdependent metalloproteinases (MMPs) than their TIMP inhibitor and hence destroy the matrix, in particular elastin, and construct meshes of fibrosis. VEGF, also produced in excess, participates in these disorders and in vascular neogenesis.

Varicose veins
In short, the wall becomes very thick and disorganized, with alternating zones of fibrosis and highly cellular regions. Scanty elastin explains highly increased distensibility. Transformed SMCs are less contractile. As this damage progresses, abnormalities of flow, pressures, and hypoxic situations accentuate, instigating a vicious circle of action. These events are also painful and accompanied early by feelings of heaviness, pins-and-needles, and restless legs. Venous disease is symptomatic as soon as the mechanism of wall damage comes into play.
Biochemical progression markers can be identified in systemic venous blood, also due to changes in the microcirculation. The presence of high levels of PAI-1 is fairly specific to CVI, found in venous blood and constant when there are cutaneous trophic problems. Rheological abnormalities and raised PAI are specific findings in CVI.

Raised venous pressure downstream creates microcirculatory stasis. Microvessels react to injury via mechanisms similar to the downstream vein. In CVI, this concerns distal, tibial, and retro- or pre-malleolar skin vessels. Venules located in skin layers as well as the capillary loop are distended. Edema and ulceration are the main resultant problems.

Effects of cutaneous microcirculatory stasis
The endothelial cells of the so-called postcapillary venules of the skin are physiologically highly active in the following areas: cellular (transit of white cells by expression of adhesion molecules: selectins, ICAM and VCAM), hemostasis von Willebrand factor, tissue plasminogen activator (tPA) and PAI-1 and of inflammation cytokins, chemokins, plateletderived growth factor (PGDF) type growth factors, vascular endothelial growth factor (VEGF), tumor growth factor (TGF â-1) and basic fibroblast growth factor (bFGF). They also have another fundamental role: vasomotor regulation ensuring the secretion of vasodilator NO and prostacycline (PGI2) and vasoconstrictor endothelin. In addition, NO, by deactivating blood platelets, prevents them from secreting vasoconstrictor thromboxane A2 (TXA2).
– Endothelial activation and creation of perivascular inflammation Hypoxia is related to stasis and low shear-stress (< 10 dynes/cm2) and gives rise to exuberant endothelial cell activity. The vasodilator component is defective (NO, PGI2). The substances mentioned above enable the inflow of polymorphonuclears (the “white cell trapping” of Coleridge Smith), but also monocytes and mast cells which migrate in the subendothelium. Since microvessels have neither media nor SMCs, this biochemical disorder results in either fibrosis or necrosis of the ulcer (see below).
– Increased capillary leakage. Endothelial activation and adhesion molecules bring into play MAP-kinase-type pathways, allowing the opening of gaps between cells and the leakage of plasma fluids. This results in edema and the deposition of fibrinogen around microvessels (the “fibrin cuff” of Browse and Burnand).
– Hemorheological abnormalities. Hemoconcentration partially explains the increase in fibrinogen, a nonfiltered macromolecule, and hence hyperviscosity and hyperaggregability of red cells. This interferes with the circulation in microvessels and increases the accumulation of leukocytes. Tests correlate with symptoms (feeling of heavy legs).

Consequences of venous stasis
– Capillary maldistribution. From a vasomotor standpoint, NO and PG12 are defective, releasing the effects of vasoconstrictor substances ET 1 and TXA2. There is also production of constrictor oxygenated free radicals because of the breakdown of mitochondrial ATP of hypoxic endothelial cells. This leads to the appearance of avascular skin areas where capillaries are closed (video-capillaroscopy). These areas are hypoxemic (low tc-PO2) forming the basis of white atrophy and are highly sensitive to changes in temperature and trauma. Alongside these areas, there are on the contrary vasodilated areas rich in edema fluid and compressive (Fagrell compressive edema). Finally, other areas are rich in capillary vessels but deformed, forming a specific microangiopathy.
– Fagrell and Bollinger microangiopathy. Video-capillaroscopy has shown what capillary loops look like: they are deformed, with a glomerular appearance, surrounded by an edematous pale halo. Endothelial cells are multiplied and “wound into a ball” because of growth factors. Histology is specific: fibrin cuff, accumulation of leukocytes and mast cells, and deposit of hemosiderin derived from lysed red cells, explaining the skin pigmentation sometimes present (brawny dermatitis).
– Changes in lymphatic system. Lymph vessels are hypertrophic and fragmented, in response to venous pressure and leakage. These lesions play a role in the onset and progression of edema.
– Clinically, this microcirculatory disorder causes pain accompanying edema, then ongoing skin damage.

– The distal skin: a region requiring constant monitoring. The lesions described above form the base of ulcers. Regions most exposed are distal, and malleolar. Inflammation, diabetes, and above all a (sometimes even minimal) blow initiate the ulcer process. Continuous therapeutic attention is essential in this situation.
– Cellular and biochemical mechanisms. Some theories appear to be secondary: anoxia or “barrier” role of fibrin cuff, Fagrell compressive edema, Bollinger capillary thrombosis. Two processes seem to act, as has been shown recently: accumulation of leukocytes (Coleridge-Smith’s white cell trapping), explaining the rich enzyme potential surrounding the microvenule, and the role after migration of monocytes and mast cells, based upon the work of P.J. Pappas (Figure 4). Attracted by chemotaxis linked to perivenular hemorrhagic suffusions, mast cells deliver TGF â-1 at a distance in the subendothelium. Activated fibroblasts supply MMPs 1 and 2 destroying the cellular matrix and opening the ulcer. Pappas has shown the existence of these events at stages 4 and 5 of the CEAP classification, where there is a gradient in TGF â-1 receptor levels and little production of inhibitor TIMP. Fibroblasts may subsequently reverse their role at stage 6, provide inhibition, and revert to their fibrosing function in the healing phase. 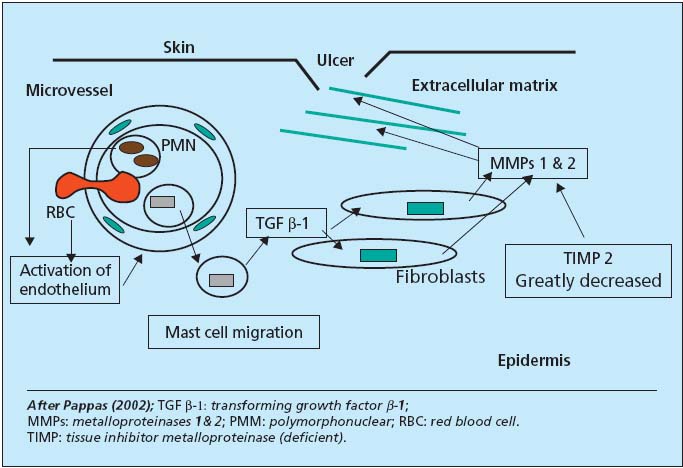 Study of the mechanisms of lesions at different stages of CVI shows how a hemodynamic disorder, excess weight of the blood column in lower limb veins, gradually causes changes in cellular information, then cellular and biochemical disorders (Figure 5). These lesions are now precisely identified, and explain the development of varicose veins, symptoms, edema, and ulcers. Awareness of them opens the way for therapeutic actions of every type, as well as prevention. 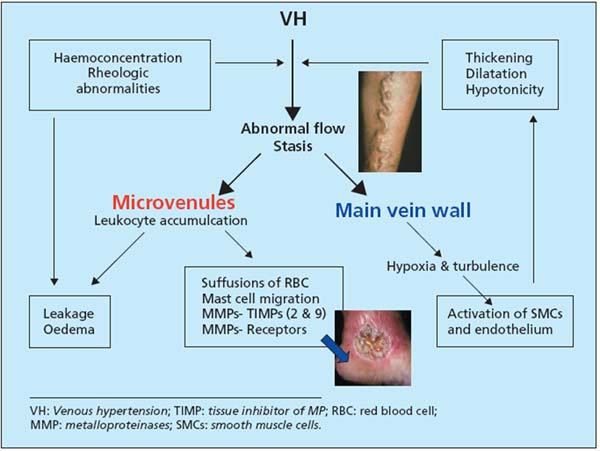