Most chronic ulcers of the lower extremity are caused by insufficiency of the deep venous system including the perforating veins. Venous crural ulcer is the last, and a very severe, complication of venous insufficiency. If the deep venous system and the perforating veins are insufficient, then the pressure in the superficial veins is significantly greater. A longer duration of venous hypertension results in increased transudation of plasma to the pericapillary space. As a result, the interstitium is overloaded with fluid, lipids, proteins, and products of cellular degradation. An increased amount of extracellular fluid rich in proteins is transported by the lymphatic vessels. However, their transport capacity is limited. After they are overloaded, they become insufficient, and gradually they become damaged.
From the morphological nomenclature, venous ulcer is a skin defect, presenting as an excavation into the deep layers of the skin and subcutaneous tissues. Some venous ulcerations become secondarily infected. The upper two thirds of the crater are filled with fibrin and granulations, and the lower third is formed by thick tissue, which in long-lasting ulcers develops a very firm consistency. The pathological changes reach to the fascia, but the inflammatory reaction can be present even subfascially. The border of the ulcer is edematous, and the skin around the ulcer is changed by chronic inflammation into lipodermatosclerosis. One of the first anatomical structures that are functionally and later morphologically altered and damaged during the development of venous ulcer are blood vessels. Around the ulcer and in the ulcer itself, pathological changes in the blood vessels and edema of the interstitium have been described.1 Even though many pathophysiological causes and the resulting alterations which play a role in ulcer development are known, these mechanisms are a constant subject of discussion. There is discussion as to which mechanisms in ulcer development are primary or secondary, and in which order, and to which extent, if all or just some must be present in the development of ulcers. The origin and development of venous hypertension are being investigated with regard to a reduction in the number of microvessels, increased transendothelial and interendothelial permeability to proteins and erythrocytes, impaired endothelial NO synthesis, reduction of tissue fibrinolytic activity, white-cell trapping, the presence of fibrin cuffs and several other possibilities being considered. The list of these has been published in many studies.1-8, 9

Lymphatic vessels, which are an integral part of the dermis and subcutaneous tissue in the region of the future venous ulcer, in contrast to blood vessels, are not the focus of attention. The published findings about lymphatic vessels in this region relate to the area around the ulcer and not the ulcer itself. They are mainly of a functional character. Indirect and isotope lymphography have demonstrated lymphovenous anastomoses around the ulcer.10 In postthrombotic syndrome, isotope lymphography has revealed a decreased or zero transport through the subfascial lymphatic collecting vessel.11 Using the same method in edema of venous origin, increased as well as decreased flow through the lymphatics has been described.12-14 Indirect contrast lymphography has shown irregular filling of lymphatics in chronic venous insufficiency,15 their dilation with extravasation of contrast material, and dermal back flow.16 In venous insufficiency, fluorescent microlymphography has shown obliteration of part of the superficial lymphatic capillary network of the skin – lymphatic microangiopathy,17 dilation of lymphatics,18 and insufficiency of deep lymphatic collectors.11 In this state, on direct contrast X-ray lymphography, nonhomogenous filling of lymphatic vessels has been demonstrated.19 With these impaired functions there is release of platelet activating factor of oxygen free radicals which leads to disruption of the muscular pump and valves of the lymphatics.20,21
In occasional morphological studies, which considered this problem, destruction of mitochondria in the endothelium of lymphatic vessels was described22 and a collapse of the lymphatics in the region of the veins altered by varicosities.23 From the studies discussed it is apparent that in chronic venous insufficiency the lymphatic vessels are functionally altered. Is there morphological change that corresponds to the functional alteration?

On the basis of postmortem studies and tissue biopsies of venous ulcers and lipodermatosclerotically altered skin in 39 humans, using histology, staining, and electron microscopy methods, mild to severe pathological changes were found in the lymphatics.9

Venous ulcer
The ulcer was divided into three zones: superficial, intermediate, and deep. The superficial layer reaches from the fibrin of the collagen and inflammatory cell layer to the apex of the blood capillaries. The intermediate layer is rich in vessels and contains blood capillaries, arterioles, postcapillary venules, venules, and granulation tissue. The deep layer of the ulcer is located at the fascia and contains thick collagen fibers and large, partially-tocompletely thrombosed veins. In the superficial and intermediate layer, no lymphatics were found. Rarely, in only a small number of ulcers, several lymphatics were found in the transition between the intermediate and deep layers. In the deep layer, in the tissue and around thrombosed veins, occasional lymphatic collectors were found, which were continuations of the lymphatic collectors of the distal parts of the arch and sole of the foot (Figures 1 and 9). Lymphatics were found up to the lipodermatosclerotic border of the ulcer (Figure 2). In the intermediate and deep layer, interstitial edema was present (Figure 3).

Lipodermatosclerosis of the skin

Lymphatic vessels were dilated at the borders of the ulcer and up to 20 cm from the ulcer and both in the lipodermatosclerotic and normal-looking skin, but with varices (Figures 4 and 5). Electron microscopy showed various degrees of changes in the lymphatics, from normal to severe damage (Figures 6, 7, and 8). In the less severe cases, there is abundant pinocytosis and vacuolization in the endothelial cells. In some lymphatics the endothelium is atrophic, in others hypertrophic with increased microfilaments. In severely damaged lymphatics the wall is edematous, there are defects of the endothelial lining, and there is apoptosis of the endothelial cells. Collagen fibers protrude into the lumen of the lymphatics through the endothelial defects. Smooth muscle cells in the wall of the lymphatic collectors are vacuolized, in some parts transformed into myofibrocytes, in other parts disintegrated, and their cell cytoplasm is filled with cellular debris. Interendothelial junctions were closed as well as wide open. The collapse of the lymphatic vessel was not observed. In the lipodermatosclerotic skin there were alternating regions of more and less damaged lymphatics. 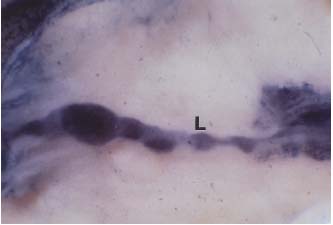 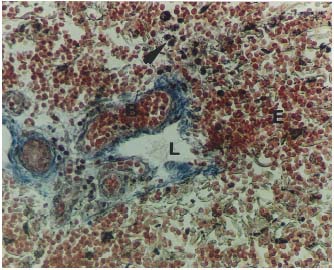 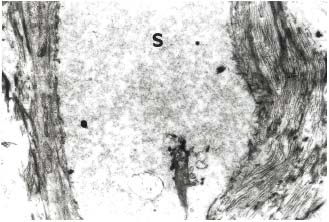 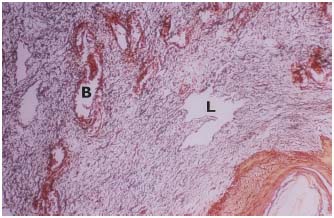 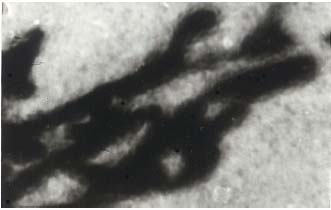 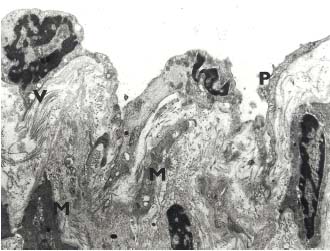 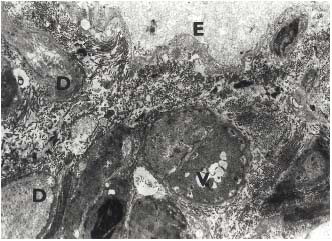 Figure 7. Male 46 years. The wall of the lymphatic vessel at the
periphery of the ulcer in lipodermatosclerotic skin. Disintegration of
the endothelial cells (E). Smooth muscle cells with vacuoles (V), some
of them are destroyed (D). Electron photomicrograph, original.
magnification x 4.5000. 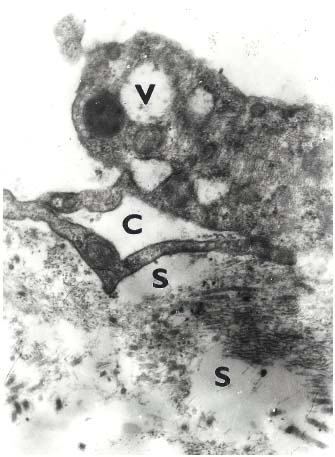 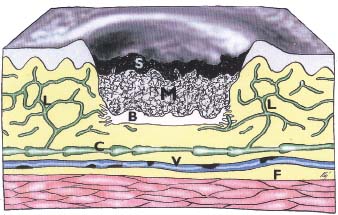 Figure 9 Schema of lymphatic drainage of a venous ulcer.
S-superficial part of ulcer-fibrin with apexes of capillary loops.
M-middle part of the ulcer -granulation tissue. B- lower part of the
ulcer- layer which is formed with the different amount of collagen
fibers. In superficial and middle parts lymphatics are absent.
Lymphatics were present sporadically in the base of ulcer between its
middle and lower part. Lymphatics with various degrees of
morphological damage exist in the lipodermatosclerotic periphery
and margin of the ulcer (P). Deep lymphatic collector (C) with
thrombotic vein (V) on underlying fascia (F).

WHAT CAN BE CONCLUDED FROM THE
MORPHOLOGICAL FINDINGS

Several factors play a role in the development of venous ulcer, and these are mentioned at the introduction of this study. From the perspective of pathological anatomy, in the ulcer, blood vessels (veins and blood capillaries) are primarily damaged. Secondarily, there is also morphological alteration of lymphatic vessels. In developed disease, these changes are present side by side. The granulation tissue of the ulcer contains no, or perhaps only a few, sporadic lymphatics. This disrupts the resorption of the increased edematous fluid in the ulcer tissue. Resorption into lymphatic vessels is possible only at the ulcer border where these vessels are present. With regard to the fact that the lymphatic vessels in the lipodermatosclerotically altered skin at the ulcer border and its surroundings are morphologically damaged, the resorption of interstitial fluid is also not adequate (Figure 9).
This is confirmed by the presence of dilated lymphatics, edema surrounding the lymphatics, and widened interendothelial junctions, which, according to the hemodynamic situation, allow for the movement of edema fluid into the lumen of lymphatics but also back from the lymphatics to the interstitium. Due to the fact that the smooth muscle cells of part of the lymphatic collectors are partially or completely destroyed in longlasting ulcers, there is disruption of the muscle pump of lymphatics. Considerable pinocytosis, the presence of vacuoles and increased microfilaments in endothelial cells of the lymphatics demonstrates a compensatory reaction of the lymphatics to try and get rid of the increased interstitial fluid. In later phases, there is atrophy of the endothelial cells and their apoptosis. Due to the abundant volume of edematous fluid and pathologically damaged lymphatics, the transport capacity of the lymphatics is decreased. In microscopy samples, most of these vessels are dilated and have significantly irregular contours. The changes in lipodermatosclerosis described here are in different stages of development in a given patient. In areas further from the ulcer, they are less apparent.
Venous ulcer is a chronically open wound, which heals by secondary intention. However, it differs from most secondary healing wounds in which chronic venous insufficiency is not present. An example are wounds healing by secondary intention after surgical procedures.24 Granulation tissue in both cases is an obstruction for the ingrowth of lymphatic vessels. Nevertheless, in surgical wounds, where there is also edema around the edges, a limited number of lymphatics grow into the edges of the granulation tissue. During wound healing, which is seen as the joining of edges of the defect (contraction of myofibrocytes), the defect is bridged by part of the newly formed lymphatic vessels.25 In a short time, the blood vessels in the defect connect to the surrounding vascular network. In this way the edema gradually decreases. This is not significant in venous ulcers, due to the almost complete absence of lymphatic vessels in the granulation tissue of the ulcer. Contributing to this is the fact that the granulation tissue of the ulcer is in different stages of development in different areas. There are areas of well-developed granulation tissue, but in some areas there are focal necroses due to the destruction of capillaries (Eliska, Eliskova, unpublished findings). Another difference is that venous insufficiency maintains an increased filtration and permeability of blood capillaries. Thus, venous insufficiency is a continuous source of excess interstitial fluid, which overfills and in the end damages lymphatic vessels. At the same time it maintains long-lasting presence of the granulation tissue. Another disadvantage of venous ulcer is the increase in the tissue at the base of the defect. Here the tissue forms a firm scar that prevents the ingrowth of lymphatics into the ulcer from the undamaged tissues located deep to the ulcer. Insufficiency of lymphatics in the ulcer and damaged lymphatics in lipodermatosclerotic skin are morphological factors that maintain phlebolymphedema and the chronicity of the ulcer, and worsen its healing process. All these morphological changes and damage to the lymphatics, that resulted as a consequence of chronic venous insufficiency, worsen the venous insufficiency itself. By a feedback mechanism, the venous insufficiency negatively affects the lymphatics. This causes a vicious cycle, whose result is visible as improper healing of the venous ulcer (Table I). With respect to these irreversible morphological changes we can expect that even after healing of the ulcer by scarring, the lymphatic vessels of this region remain partially damaged, and thus lead to the recurrence of the ulcer with any smaller load.

This investigation received financial support from Research project of Ministry of education, Youth and Sport Czech Republic No 206017-01. 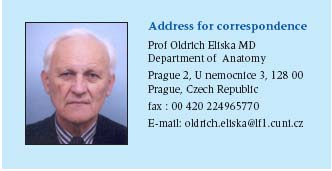