The nutcracker syndrome is quite a rare condition. It is due to the compression of the distal segment of the left renal vein (LRV) between the superior mesenteric artery (SMA) and the aorta (also called left renal vein entrapment). El Sadr reported the first case in 1950,1 but De Schepper named it.2 This syndrome needs treatment when symptoms are disabling.

The LRV arises from the left kidney and opens into the inferior vena cava after 5 to 9 cm (Figure 1). In its distal part, the LRV passes between the anterior aspect of the juxtarenal aorta and the posterior aspect of the proximal segment of the superior mesenteric artery (SMA). The main tributaries of the LRV are the left gonadal vein, the left ureteral vein, capsular veins, lumbar veins, and the ascending lumbar vein from below and to the side, while the left middle suprarenal vein and the inferior phrenic vein come from above. There are also connections with the left hemiazygos vein and with internal and external vertebral plexuses.3 In rare cases (1.8%), the LRV can have a retroaortic course,4 or be doubled in a preand retroaortic course in a circumaortic LRV also known as renal collar (5.7%).4 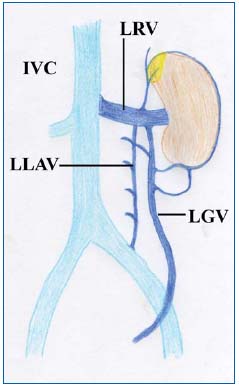 The SMA normally originates from the aorta at a 90° angle with a ventral direction for 4-5 mm before taking a caudal direction. This short initial segment prevents LRV compression.

Compression of the distal part of the LRV is generally due to the superior mesenteric artery arising from the aorta at an acute angle.5,6 Vein compression can also occur in patients with a retroaortic (posterior nutcracker syndrome) or a circumaortic LRV. Other factors have been reported as contributory or exclusive causes: posterior ptosis of the left kidney, abnormally high course of the LRV,7 and excessive fibrous tissue at the origin of the SMA.8

The compression induces venous obstruction of the LRV. This phenomenon leads to proximal venous pressure increase, which induces the development of varicose veins and collateral pathways.

Nutcracker syndrome occurs more frequently in women by the 3rd or 4th decades, although cases have been reported in children.9,10

Symptoms can be due to venous hypertension within the left kidney: left-flank pain that can radiate to the buttock and hematuria (from microscopic to gross hematuria). Symptoms can also be the consequences of the development of collateral pathways:

• Pelvic congestion syndrome in women or varicocele in men due to massive reflux into the left gonadal vein. Pelvic congestion syndrome can include chronic pelvic pain, dyspareunia, dysmenorrhea, and urinary symptoms. Symptoms commonly worsen on standing or sitting and improve when lying down. It can also lead to the development of lower limb varicoses with superficial venous insufficiency, atypical varicose veins (buttock, posterior and the lateral aspect of the thigh…), or even recurrence after surgery for varicose veins.
• Myelitis and syringomyelia in very rare cases.11 In addition, other symptoms as chronic pediatric fatigue syndrome12 and gastrointestinal symptoms13 have been attributed to the nutcracker syndrome, but in these cases pathogenesis remains unclear.

Whatever the technique used, it should be remembered that LRV compression is increased by the standing position because of the weight of the bowel and thus may be underestimated in imaging examinations performed in decubitus (CT scan, magnetic resonance angiography, and phlebography). Fitoz10 showed that there were significant differences in LRV diameter at the aortomesenteric portion, diameter ratio, and SMA between the supine and upright positions.

Duplex scanning
Duplex scanning should be performed when the patient is in the fasting state and after 3 days of a no fiber diet. Horizontal, sagittal, and transverse sections should be used to examine the celiac region (Figure 2). 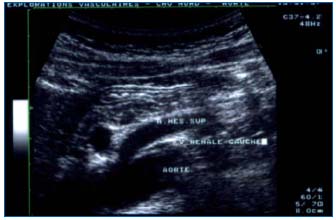 Figure 2: Duplex image of a transverse section in a patient with nutcracker syndrome.

Scanning should be used to search for LRV stenosis between the superior mesenteric artery and the aorta, for flow abnormalities due to the obstruction, and for collateral pathways. The stenosis is evaluated by comparing the anteroposterior diameter of the LRV on the left side of the aorta and at the level of the stenosis.14 Flow should be analyzed by measurement of peak velocity at the stenosis and in the hilum of the left kidney.14 The main collateral pathway is the left gonadal vein and should be measured. Reversed caudal flow is often found. The SMA should also be analyzed: location of its origin, angle of the proximal segment, distance between the SMA and the aorta at the level of the LRV.

Kim14 suggested that a cut-off value of more than 5-fold for the ratio of the anteroposterior diameter and the ratio of peak velocity should be used as an ultrasound criterion in diagnosing the nutcracker syndrome. The sensitivity and specificity of duplex scanning can be increased to 78% and 100%, respectively, by the addition to the diagnostic criteria of color flow in the collateral veins.15

Fitoz10 showed that upright position imaging revealed comparatively narrower SMA angles and more pronounced entrapment values in patients with nutcracker syndrome. The SMA angle measurement had sensitivity and specificity of 69.6% and 61.5%, respectively, in the supine position, and 87.0% and 76.9% in the upright position when the cutoff values were set to less than 41° and 21°, respectively.

Computed tomography angiography and magnetic resonance angiography
Both examinations offer multiplanar imaging and are noninvasive, and magnetic resonance angiography has the advantage of avoiding exposure to radiation. They should be performed before phlebography because they can exclude other causes of left flank pain and hematuria. These two examinations show the LRV and delineate its relation to the surrounding structures. They should be done during the portal phase to obtain the best opacification of the vein and to identify collateral pathways, which are opacified early.16

Left renal vein compression between the aorta and the superior mesenteric artery with proximal dilatation of the vein is frequently found according to Buschi,17 72% of whose patients had >50% stenosis. The compression is considered significant when the diameter of the proximal LRV is 5 times the diameter at the level of the stenosis. These examinations can also show varicose veins of the hilum of the left kidney and collateral pathways (Figure 3). Left ovarian vein reflux can be seen during the portal phase, when the infrarenal inferior vena cava is not yet opacified. The SMA frequently rises at an acute angle from the aorta, but can have a low or lateral origin, and the distance between the SMA and the aorta at the level of the LRV is reduced, as shown by Fu.18 In the case of posterior nutcracker syndrome, the vein follows a retroaortic course and is compressed between the aorta and the spine (Figure 4). 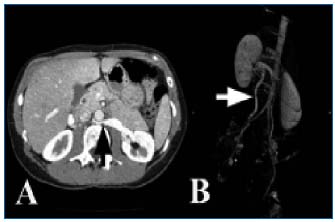 Phlebography and pressure measurements
Selective LRV phlebography is performed under local anesthesia using a percutaneous approach with a femoral or brachial route. The compression of the LRV can be viewed and is associated with dye stasis. It can also reveal the presence of varicose veins or collateral pathways or both (Figure 5A). When left gonadal vein is refluxing, pelvic views should be obtained (Figure 5B). During this examination, the renocaval pullback gradient should be measured. It is <1 mm Hg in control patients.19 Nishimura regarded pressure gradients of 3 mm Hg or more as indicative of renal hypertension.20 The value of this gradient can be discussed mainly in the case of major reflux in the left gonadal vein.

Urological investigations
These are only used in cases of hematuria, which is commonly microscopic. At least 90% of red cells should be isomorphic on phase contrast microscopy if a glomerular cause of the hematuria is to be excluded. The urological work-up can include cystoscopy (localization of the hematuria to the left side) and flexible ureterorenoscopy or even renal biopsy.

Laboratory investigations
The coagulation profile should be normal and tests for urinary bilharziasis and tuberculosis should be negative.

Only symptomatic and disabling nutcracker syndrome should be treated. Children should be treated conservatively because cases of spontaneous remission have been reported during growth.21,22 Different approaches can be used.

Surgical approach
Several techniques have been used to treat nutcracker syndrome and 56 cases have been reported in the literature.

Left renal vein transposition:
The LRV is approached and the left middle suprarenal vein is divided in order to allow LRV transposition.8,26-35 A clamp is applied to the IVC and the LRV is sectioned. A running suture is performed on the IVC. The LRV is reimplanted 3 to 5 cm below the formal opening. In case of associated pelvic congestion syndrome or varicocele, the left gonadal vein should be divided too. This technique can be performed by midline supraumbilical laparotomy, a right subcostal approach, or minilaparotomy. LRV transposition is nowadays regarded as the surgical method of choice,34 and has been used to treat 28 patients, with excellent results in 27 cases and 1 recurrence.

Figure 5: Angiogram of a patient with nutcracker syndrome.
A: Stenosis of the left renal vein, with dye stasis and collateral pathways (left gonadal vein, white arrow). B: Caudal view of the left
ovarian vein with reflux and pelvic varicose. C: Result after stenting.

LRV bypass
A prosthetic or spiraled saphenous vein graft can be used in order to perform a bypass from the LRV to the IVC.36

SMA transposition
The SMA is divided at its origin on the aorta and reimplanted under the LRV.8,37 This technique requires arterial clamping and reconstruction which can be performed within a short time, thus avoiding the risk of bowel ischemia. Its main risk is postoperative thrombosis.

Autotransplantation
This is an effective but highly invasive technique that exposes patients to the risks of renal ischemia and mainly of ureteral anastomosis.31,38

Endovascular approach
This approach is less invasive as it can be performed percutaneously.

Embolization
Under local anesthesia, a brachial or femoral percutaneous approach allows catheterization of the LRV and then of the gonadal vein, which is embolized using coils or a sclerosing agent or both.44,45 This percutaneous technique was used to improve symptoms in patients without renal symptoms (isolated varicocele or pelvic congestion syndrome). The main risk of this technique is the onset of renal symptoms as shown by Hartung,16 or even recurrence of pelvic congestion syndrome or varicocele as reported by Pallwein.46 In fact, if the procedure is successful, the main collateral pathway is occluded, leading to worsening of LRV outflow and so to an increase in LRV pressure.

Stenting
Stenting16 should be performed under general anesthesia to avoid pain, and intravenous heparin should be given. The LRV is catheterized using a percutaneous femoral approach. A self-expanding stent (10 to 20 mm in diameter and 40 to 70 mm in length according to the literature) is deployed over a super-stiff guidewire and then dilated with a large balloon. Completion angiography is performed and the renocaval pullback gradient is measured before sheath removal (Figure 5C). Since the first case performed by Neste in 1996,48 34 cases have been reported,8,16,40,48-56 including 3 pediatric patients.53 All patients were improved, but 3 had symptom recurrence. Moreover, 2 cases of early stent migration have been reported8,16 and 2 cases of late stent slipping.16 No restenosis has been reported, but none of these studies had a follow-up of more than 2 years.

The nutcracker syndrome is a rare condition, but is certainly underdiagnosed. It should be considered when patients present with left flank pain and hematuria, or pelvic congestion syndrome, or both. Duplex scanning and computed tomography angiography show the compression of the LRV, but diagnosis can be confirmed by selective phlebography. Endovascular treatment by stenting was proposed and is not very invasive, but follow-up is too short to establish the role of this technique in the management of the nutcracker syndrome. To date, surgery remains the gold standard.