The study was aimed at evaluating the efficacy of micronized purified flavonoid fraction (MPFF) in patients with primary chronic venous disease (CVD). It included 35 patients with varicose veins of the lower extremities (18 with bilateral and 7 with unilateral lesion). A total of 53 legs with varicose veins were evaluated in 3 groups based on the CEAP (Clinical, Etiology, Anatomic, Pathophysiology classification system) clinical class: group C2 consisted of 21 legs, and groups C3 and C4 consisted of 16 legs each. Patients received MPFF at a dose of 1000 mg daily for 1 month. The venous function of the lower extremities was evaluated using venous photoplethysmography before and after a course of pharmacotherapy. Venous refilling time (VRT) and half VRT (½VRT) were measured as parameters of total venous reflux. In the general sample of patients with C2-C4 classes, a significant increase in the venous photoplethysmography parameters was observed after the MPFF treatment course. Thus, VRT increased from [median (interquartile range)] 16 (12; 18) to 18 (13; 25) seconds, and ½VRT increased from 6 (5; 7) to 7 (5; 9) seconds. In addition, a significant increase in VRT was observed in each group of patients with classes C2, C3, and C4. An inverse relationship was found between an increase in VRT after the treatment and both the CEAP clinical class and patient’s age. Therefore, the treatment with MPFF for 1 month is associated with a decrease in total venous reflux in patients with primary CVD. The effect of MPFF on total venous reflux was greater in younger patients and in patients with a lower clinical class of the disease.

Venoactive drugs (VADs), including micronized purified flavonoid fraction (MPFF) represent an effective pathogenetic therapy for primary chronic venous disease (CVD), or varicose veins of the lower extremities. The MPFF treatment acts on almost all components of the CVD pathogenesis and is associated with a reduction in the inflammatory process and venous edema and an increase in the venous tone and venous wall resistance to hyperemia.1-3 The efficacy of pharmacotherapy for CVD is assessed by instrumental methods, among which duplex ultrasound scanning (DUS) is considered the “gold standard” for evaluating venous function. However, this method does not provide a standardized quantitative characteristic of total venous reflux as the main pathogenetic manifestation of CVD. Among other noninvasive methods for examination of patients with primary CVD, venous photoplethysmography (PPG) is of particular interest. This easy-to-perform method makes it possible to identify and quantify venous reflux.4 According to the results of some studies, the parameters measured by venous PPG correlate with direct measurements of the venous pressure and phlebography data, as well as with data obtained by DUS.4-7 Some authors have successfully used venous PPG not only to identify and measure venous reflux in CVD, but also to monitor the efficacy of surgical or pharmacological treatment.8-11 Previously, we have shown that venous PPG is an appropriate method for the quantitative instrumental assessment of total venous reflux.12,13

The aim of this study was to evaluate the efficacy of MPFF in the treatment of CVD using venous PPG.

The study included 35 patients (24 women and 11 men) with CVD (mean age 52±12 years). Of them, 18 patients had signs of varicose disease on both legs (the CEAP [Clinical, Etiology, Anatomic, Pathophysiology classification] clinical class on the right and left legs could be different), and 7 patients had signs only on one leg. In total, varicose veins were present on 53 lower extremities. The diagnosis was made clinically and confirmed by DUS. The patients were allocated into 3 groups on the basis of the CEAP clinical class, and one patient could fall into 2 groups if classes for the right and left legs were different. Group C2 included 16 patients (21 legs), and groups C3 and C4 included 16 legs each.

All patients underwent venous PPG using a SmartDop 30EX Doppler analyzer with an additional photosensor (Hadeco Inc., Japan). Venous refilling time (VRT, sec) and half VRT (½VRT, sec) were evaluated. The measurements were carried out with the patient in a sitting position with legs lowered without support. The photosensor was fixed on intact skin 1 to 2 cm above the medial malleolus and somewhat posterior to it. The load on the muscle-venous pump of the lower leg consisted in performing 5 flexionextensions in the ankle joint, followed by a period of rest, during which the PPG device built a plethysmogram and calculated VRT and ½VRT. After PPG results were obtained, MPFF was prescribed to all patients at a dose of 1000 mg daily. The mean (standard deviation [SD]) duration of MPFF treatment was 33.9 (±10.4) days. After the treatment course, the follow-up venous PPG was performed. Statistical analysis was carried out using nonparametric tests. Differences between the groups in the rates of CVD signs were assessed using the Mann-Whitney U test and Kruskal-Wallis test (one-way analysis of variance [ANOVA]). Differences between the values at baseline and after the treatment were assessed using the Wilcoxon signed rank test. The Spearman rank correlation coefficient was used to identify relationships between the variables. Data are presented as median and interquartile range (25%; 75%).

The study revealed a significant correlation between the CVD clinical class and the parameters of total venous reflux. Using Kruskal-Wallis ANOVA, we confirmed the patterns of differences in venous PPG parameters (VRT and ½VRT) that we had previously discovered in patients with different CEAP clinical classes. Thus, the H-test was 27.37 for VRT (P<0.0001) and 19.97 for ½VRT (P<0.0001). The significant differences in VRT were observed between all groups, and significant differences in ½VRT were observed between all except between C3 and C4 groups (Figure 1). These findings justified using venous PPG to study the drug efficacy. 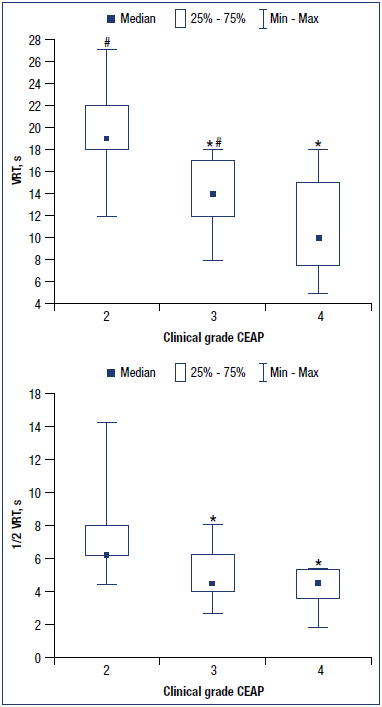 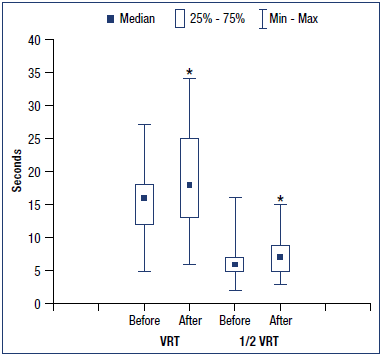 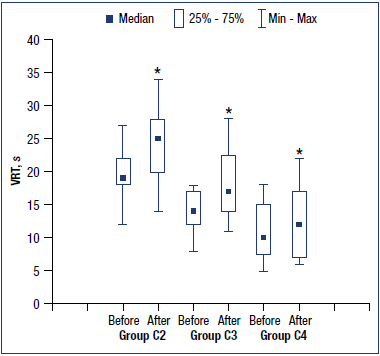 Table I. Correlations between different parameters of venous photoplethysmography in the study.

The efficacy of MPFF in CVD has been demonstrated in a number of studies. Thus, MPFF treatment resulted in a significant reduction in the rates of typical adverse events after endovascular treatment of class C2 CVD and demonstrated its clinical efficacy as a strategy of veinspecific pharmacological protection during endovascular treatment of CVD.14,15 In patients with a combined varicose vein disease of the lower extremities and pelvis, the use of MPFF contributed to the reduction in pain in the lower extremities and chronic pelvic pain.16 In a number of studies, the treatment with MPFF in CVD was associated with a reduction in venous edema and in trophic disorders, and also with an acceleration in the healing of venous ulcers.17-19 Most studies have demonstrated the efficacy of MPFF clinically, on the basis of reduction in patient complaints and with the use of venous questionnaires and clinical scales. In some studies, changes in venous status in patients receiving MPFF were assessed by instrumental methods. Thus, the treatment with MPFF was associated with such positive changes in DUS as a reduction in the venous wall thickness, venous diameter, and duration of reflux.20,21 Ultrasonic elastography has also demonstrated MPFF efficacy in terms of an increase in the perivascular areas of elastographic homogeneity.20 However, no accurate instrumental evaluation of the hemodynamic efficacy of MPFF, in particular by the quantitative assessment of total venous reflux, has been published.

In this study, we used the venous PPG to evaluate MPFF efficacy in CVD. This instrumental method does not reveal the exact anatomical location of the reflux but most fully reflects the degree of functional impairment of venous function and correlates well with clinical outcomes.22,23 Venous PPG allows the quantitative characterization of venous reflux.24 The venous PPG parameters are global indicators of venous reflux and valvular insufficiency and directly correlate with the severity of functional disorders.22 Previously, we have already shown a close correlation between the CEAP clinical class of primary CVD and the parameters of venous PPG.12,13 In the present study, this pattern has been confirmed. At the advanced stages of CVD and, therefore, a greater clinical severity of the process, the parameters of venous PPG were lower, which suggested an increase in total venous reflux.

We found a significant increase in venous PPG parameters (VRT and ½VRT) in patients with CVD after the treatment with MPFF at a dose of 1000 mg daily for 32.3 (± 9.3) days, which demonstrates a decrease in total venous reflux and an improvement in venous function.

An important fact is that a significant increase in VRT and ½VRT was observed in patients of clinical classes C2, C3, and C4. At the same time, an inverse correlation was shown between the increase in VRT after MPFF treatment and the clinical class of CVD. Therefore, the lower the clinical class of CVD, the greater the efficacy of treatment with MPFF 1000 mg daily for 1 month in terms of the effect on total venous reflux. Perhaps, in patients with advanced classes of CVD, the longer treatment duration is required for positive changes in venous function and improvement in venous PPG parameters. This is evidenced by the direct correlation between the treatment duration and magnitude of the VRT increase. In other words, the longer the duration of treatment with MPFF, the more pronounced the observed changes in VRT as an integral parameter of venous reflux.

Besides venous reflux, an important role in the development of venous dysfunction in CVD is played by the calf muscle pump, which ensures optimal emptying of the venous system of the lower extremities. The muscle pump weakens with age, so its contribution to the venous function of the lower extremities decreases, and its role in the development of CVD increases. The present study has revealed a significant inverse relationship between an increase in VRT and patient’s age, despite the fact that there were no significant relationships between age and venous PPG parameters (VRT and ½VRT) at baseline. Thus, in patients with CVD receiving MPFF, the positive changes in VRT decrease with age, which is probably explained by a larger contribution of the calf muscle pump failure to the development of CVD.