What is postthrombotic venous obstruction and how can it be avoided?

Download this issue Back to summary
What is postthrombotic venous
obstruction and how can it be
avoided?
Anthony J. COMEROTA, MD,
FACS, FACC
Director, Jobst Vascular Institute,
The Toledo Hospital, Toledo, OH, USA;
Adjunct Professor of Surgery,
University of Michigan

Postthrombotic venous obstruction is part of the pathophysiology of a postthrombotic syndrome. When the obstruction occurs in the iliofemoral segment, postthrombotic morbidity is often severe. In a recent study, the intraluminal contents of chronically occluded postthrombotic common femoral veins were analyzed. Approximately 80% to 90% of the tissues analyzed were composed of type I collagen, with type III collagen comprising the remainder. Vascular endothelial growth factor receptor 2 (VEGFR2) was more abundant in young specimens (≤1 year after the acute DVT); angiopoieton-1 receptor (TIE-2) was observed more often and at higher concentrations in mature specimens (≥10 years after the acute DVT); and the CD31 ligand was found equally in both young and mature specimens. Postthrombotic endoluminal obstruction can be avoided if the initial obliterating thrombus is successfully removed during the course of treatment for acute DVT. In fact, randomized trials, registries, and large observational experiences have demonstrated a reduction in the incidence of postthrombotic syndrome after successful thrombus removal. Another randomized trial, the ATTRACT trial, has recruited 692 patients with acute DVT in order to evaluate whether there is a reduction in or elimination of the incidence of postthrombotic syndrome with anticoagulation plus catheter-directed thrombolysis vs anticoagulation alone– results will be available in 2017.

Postthrombotic syndrome is the consequence of acute deep vein thrombosis (DVT) of the lower extremities. Ambulatory venous hypertension is the underlying pathophysiology resulting from venous valvular incompetence and postthrombotic luminal obstruction. Patients with iliofemoral DVT have the most frequent and severe postthrombotic morbidity and suffer the highest risk of recurrence.1-3 In a prospective observational study of patients treated for acute DVT with anticoagulation alone, Kahn et al2 observed that the most powerful predictor of severe postthrombotic syndrome was iliofemoral DVT.

Treatment strategies of anticoagulation alone do not assure that the occlusive thrombus will resolve and they depend upon the body’s endogenous thrombolytic activity to recanalize the obstructive thrombus. Unfortunately, a thrombus in the iliofemoral venous system frequently persists, causing central venous obstruction. As mentioned earlier, patients with iliofemoral DVT treated with anticoagulation alone have the highest risk for severe postthrombotic syndrome. This is largely due to persistent obstruction of the major venous outflow tract of the lower extremities.

Based on ultrasound findings and phlebography, the obstructive nature of the thrombus in the vein lumen has been variously described as chronic thrombus, intraluminal fibrosis, or scar tissue. Until recently, no definitive description of the human tissue that chronically obstructs postthrombotic veins has been provided. In an attempt to resolve the extreme morbidity of these patients, those presenting with incapacitating postthrombotic syndrome due to chronic iliofemoral and inferior vena cava occlusion are fully evaluated. If the common femoral vein is obstructed, it is recommended to perform a common femoral vein endophlebectomy followed by transluminal recanalization of the occluded iliac veins and inferior vena cava (if involved).6

VEGFR2 is an important signaling protein for vascular neogenosis and angiogenesis that stimulates monocyte and macrophage migration. VEGF receptors are typically found on young endothelial cells populating neovascular channels. There are numerous subtypes of VEGF receptors; however, VEGFR2 is the predominant mediator of the cellular responses to VEGF.8 TIE-2 is a tyrosine kinase receptor that is important for the development of blood vessels. TIE-2 promotes sprouting and branching from the primary capillary plexus and vascular remodeling, and it is necessary for normal embryonic vascular development and stabilization of blood vessels in adults.9 CD31 is a type 1 transmembrane glycoprotein that has a number of biologic functions, such as regulating vascular integrity and affecting cell survival.10 CD31 interacts with leukocytes to prevent transendothelial leukocyte migration and remove apoptotic leukocytes. Due to the sophisticated functions of CD31, it is thought that CD31 would most likely be expressed by mature endothelial cells. vWF is a glycoprotein produced by the endothelium, megokaryocytes, and subendothelial connective tissue11 that is important for maintaining hemostasis, and it is expected that mature endothelium would have a higher concentration of vWF.

Figure 1 shows three typical endoluminal images observed after venotomy of the common femoral vein. In our experience, a thrombus was absent in all but one patient. The one patient in which a thrombus was present had a documented recurrent DVT 2.5 months prior to the venotomy The hematoxylin/eosin staining confirmed that abundant collagen, neovascularization, recanalization, and inflammation were present in the common femoral vein (Figure 2). The neovascular channels were observed in the loose collagen, whereas few neovascular channels (if any) occurred within the densely packed collagen. An interesting observation was the close proximity of recanalization channels to neovessels. This suggests that two processes–neovascularization and revascularization– are governed partly by a common stimulus. 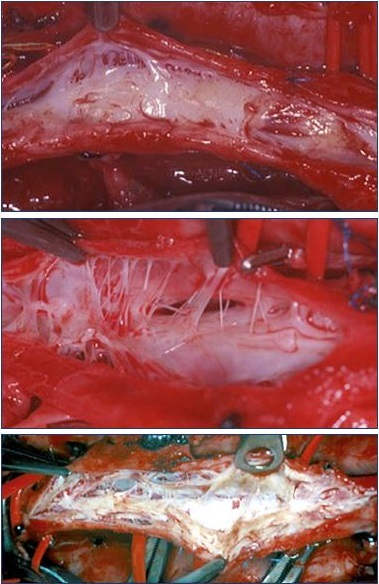 Figure 1. Endoluminal images after phlebotomy of the common
femoral vein. 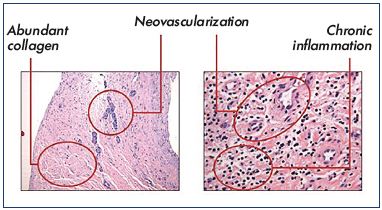 VEGFR2 was found in greater concentrations in younger specimens in both neovessels and recanalization channels. However, the neovessel endothelium was more densely stained than the recanalization endothelium. It is likely that VEGF plays a central role in both recanalization and neovascularization of the thrombus. CD31 was found in both young and mature specimens. CD31 has numerous physiological functions that include regulating vascular integrity, controlling cell survival, modulating angiogenesis and cell migration, and influencing vascular permeability. Which aspects of its many functions are operative in the earlier vs the later stages of thrombus resolution require further study. As anticipated, a greater number of channels were found in mature specimens expressing higher concentrations of vWF. Cells under the regulation of the endothelial–specific TIE-2 promoter were observed more often and at higher concentrations in mature specimens.

Can postthrombotic venous obstruction be avoided?

Plate et al12-14 reported the short-term and long-term results of their randomized trial of venous thrombectomy plus anticoagulation vs anticoagulation alone for patients with iliofemoral DVT. They observed that iliofemoral venous patency was significantly better and venous pressures, leg edema, and postthrombotic morbidity were lower in patients randomized to venous thrombectomy. The evolution of catheter-based techniques has significantly reduced the need for venous thrombectomy. Integrating mechanical techniques with catheter-directed lysis has reduced the dose of the plasminogen activator, reduced the length of the hospital stay, and improved the efficiency of thrombus removal.15,16

Figure 3A is a photograph of a patient with severe acute phlegmasia cerulea dolens after 5 days of treatment with low-molecular-weight heparin. The patient was markedly uncomfortable and could not ambulate. The iliofemoral phlebogram (Figure 3B) shows extensive venous obstruction. Following pharmacomechanical thrombolysis, patency was restored to the femoral vein (Figure 3C), common femoral vein, and iliac venous system (Figure 3D). The patient had persistent obstruction of the common iliac vein, which was corrected with a 16-mm bare-metal stent (Figure 3E). At the 36-month follow-up, the physical examination was normal, the veins were patent with normal valve function, and the patient was fully active and asymptomatic (Figure 3F).

Figure 3. Posttreatment assessment of a patient with deep vein thrombosis treated by pharmacomechanical thrombolysis and
stenting after unsuccessful anticoagulation.
Photograph of a patient with severe acute phlegmasia cerulea dolens after 5 days of treatment with low-molecular-weight heparin
(Panel A). Iliofemoral phlebogram showing extensive venous obstruction (Panel B). Patency restoration to the femoral vein (Panel C)
and the iliac venous system (Panel D) after pharmacomechanical thrombolysis. The patient had persistent obstruction of the common
iliac vein, which was corrected with a 16-mm bare-metal stent (Panel E). At the 36-month follow-up, the physical examination was
normal and the veins were patent with normal valve function (Panel F). 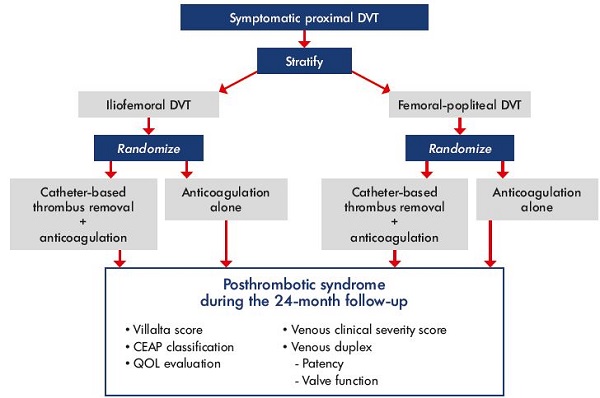 A cohort-controlled study of treatment for patients with iliofemoral DVT found that catheter-directed thrombolysis improved health-related quality of life compared with anticoagulation alone.17 Furthermore, postthrombotic morbidity was found to correlate with residual thrombus following catheter-directed thrombolysis.18 Therefore, when starting a strategy of thrombus removal, the goal should be to remove as much of the thrombus as possible and restore unobstructed venous drainage to the vena cava.

The CaVenT (Catheter-directed Venous thrombolysis in acute iliofemoral vein Thrombosis) study investigators randomized patients to anticoagulation plus catheter directed thrombolysis vs anticoagulation alone.19 They found significant benefit with catheter-directed thrombolysis, which was correlated with patency of the iliofemoral venous segment. Since the majority of patients entered into the trial had a patent iliac venous system, the number needed to treat to prevent one postthrombotic syndrome was seven. If all patients had had iliofemoral DVT, it is the author’s opinion that the number needed to treat to prevent postthrombotic syndrome would be much smaller, approaching unity.

The ATTRACT trial (Acute venous Thrombosis: Thrombus Removal with Adjunctive Catheter-directed Thrombolysis)20 is the largest trial to date randomizing patients with acute DVT to catheter-directed thrombolysis plus anticoagulation vs anticoagulation alone. The target of 692 patients was reached in December 2014. The primary end point is postthrombotic syndrome at 2 years (Figure 4). Patients were stratified at entry according to the level of their acute DVT and whether the DVT involved the iliofemoral vein or the femoral popliteal vein. The final follow-up visits will occur in December 2016, at which time, the data will be analyzed, presented, and published. While the results of the ATTRACT trial are anxiously awaited, the current body of evidence strongly supports the adoption of a strategy of thrombus removal for patients with iliofemoral DVT. Of course, removing the acute thrombus will restore patency and eliminate the substrate for luminal obstruction, thereby significantly reducing the likelihood of severe postthrombotic morbidity.