Chronic venous disease represents one of the most frequent medical conditions that could be observed in the general population. Pregnancy is one of the major predisposing factors for developing venous insufficiency due to an enlarged gravid uterus, which obstructs pelvic venous outflow, and an increase in hormone secretion, which weakens the vein wall. A clinical examination and Doppler ultrasound evaluation are used to diagnose venous insufficiency during pregnancy; these clinical findings can vary from insignificant telangiectases to severe varicose veins and skin damage. The relative risk of a venous thromboembolism (VTE) is increased by approximately 4 to 6 fold during pregnancy, and this risk is increased further during the postpartum period. In the first trimester, many fatal antenatal VTE events could occur; therefore, early prophylaxis for women with a previous VTE is necessary. In woman with a previous VTE, thromboprophylaxis should begin as early during pregnancy as practical, while women without a previous VTE, but with other risk factors, can start antenatal prophylaxis at 28 weeks of gestation. This article reviews and discusses the current guidelines for the diagnosis and treatment of chronic venous insufficiency during pregnancy and the prevention of a VTE. This article also discusses the current role of low molecular- weight heparin, warfarin, venotonic agents, and compression stockings in preventing a VTE and treating venous insufficiency during pregnancy.

Chronic venous disease represents one of the most frequent medical conditions that could be observed in the general population.1-3 The exact prevalence of chronic venous disease is difficult to determine due to differences in the selection criteria and the definition of the disease, but it is estimated to be present in >30% of adults in the Western population,1 affecting 10% to 15% of men and 20% to 25% of women.4 The American Venous Forum and Society for Vascular Surgery has classified chronic venous disease according to the clinical, etiological, anatomical, and pathological (CEAP) findings: C1, no visible or palpable signs of chronic venous disease; C2, telangiectasias or reticular veins; C3, varicose veins (>3 mm); C4, changes in skin or subcutaneous tissue; C4a, pigmentation or eczema; C4b, lipodermatosclerosis, white atrophy; C5, healed venous ulcer; and C6, active venous ulcer.5,6

Predisposing factors for chronic venous insufficiency include age, sex, obesity, lifestyle, heredity, and physical inactivity. Pregnancy is also a major predisposing factor for developing venous insufficiency, and it can be observed in 28% of all pregnancies.7 Laurikka et al analyzed cohorts of 3284 men and 3590 women aged 40, 50, and 60 years, and they found that the prevalence of varicose veins in women with 0, 1, 2, 3, or ≥4 pregnancies was 32%, 38%, 43%, 48%, and 59%, respectively.8 Venous insufficiency occurs during pregnancy for two main reasons: (i) an enlarged gravid uterus with consequent hypertension in the lower extremity veins, distension, and valve damage, which obstructs pelvic venous outflow; and (ii) an increase in hormone secretion, which weakens the vein wall.9-12 Ciardullo et al13 showed that higher serum estradiol levels during pregnancy were significantly associated with venous distensibility and clinical evidence of varicose veins in menopausal women.

A clinical examination and a Doppler ultrasound evaluation are used to diagnose venous insufficiency during pregnancy. Pain, swelling, itching, burning, or numbness are some of the clinical signs and symptoms that could be observed during the clinical examination and anamnestic questioning; it is also important to determine whether or not the varicose veins were present before pregnancy. If the patient has a family history of chronic venous disease, these symptoms might be more pronounced. The clinical findings vary from insignificant telangiectasias to severe varicose veins and skin damage. Varicose veins can be observed in the great and small saphenous veins, collaterals, or perforating veins (Figure 1). These changes could involve one or both legs, while valvular and perineal varicose veins could be seen in 10% of the cases.13 Skin changes are very rare given the young age of pregnant women and the relatively short period with symptoms of venous insufficiency. However, if such changes occur (C5 or C6 classification), it is recommended to initiate the use of compression stockings immediately. In all patients who have complaints about any type of venous insufficiency, a color Doppler ultrasound of the lower extremities should be performed as early as possible. Changes should be carefully noted and followed up during regular check-ups. 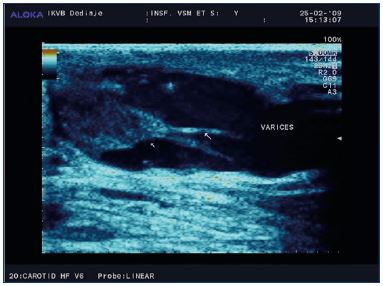 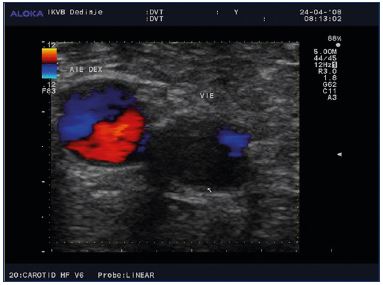 Preventing a VTE during pregnancy

While the relative risk of a venous thromboembolism (VTE) is approximately 4- to 6-fold higher during pregnancy and increases more during the postpartum period, the absolute risk is low with an overall incidence of 1 to 2 per 1000 during pregnancy and the postpartum period.14-19 The absolute incidence of a VTE during pregnancy and the postpartum period is 107 per 100 000 person-years in the UK, 175 per 100 000 person-years during the postpartum period in Denmark, and 175 per 100 000 pregnancies in Canada.14,20,21 In the first trimester, many fatal antenatal VTE events could occur; therefore, prophylaxis for women with a previous VTE should begin early (Figure 2, Figure 3).22-24 The risk for a VTE increases with gestational age, with the maximum risk occurring right after delivery. While a cesarean section is a significant risk factor for a VTE, women having vaginal deliveries are also at risk.25-28 In the postpartum period, the risk of VTE is 5-fold higher heparin throughout the antenatal period (grade C) (Figure 4). For patients with heritable thrombophilia associated with antithrombin deficiency (these patients will often be on long-term oral anticoagulation) or antiphospholipid syndrome, thromboprophylaxis using a higher dose of low-molecular-weight heparin (50%, 75%, or full treatment dose) should be offered antenatally for 6 weeks postpartum or until returned to oral anticoagulant therapy after delivery (grade D). Antenatal prophylaxis should also be considered for all women with asymptomatic antithrombin, protein C or S deficiency, or >1 thrombophilic defect; these patients should be referred to a local expert. Even in the absence of additional risk factors, such patients are recommended to have 6 weeks of postnatal prophylaxis (grade D). 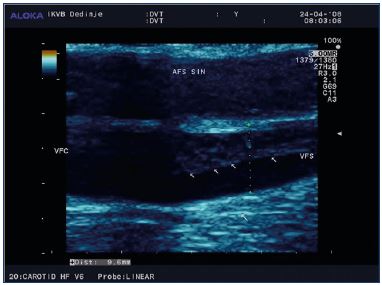 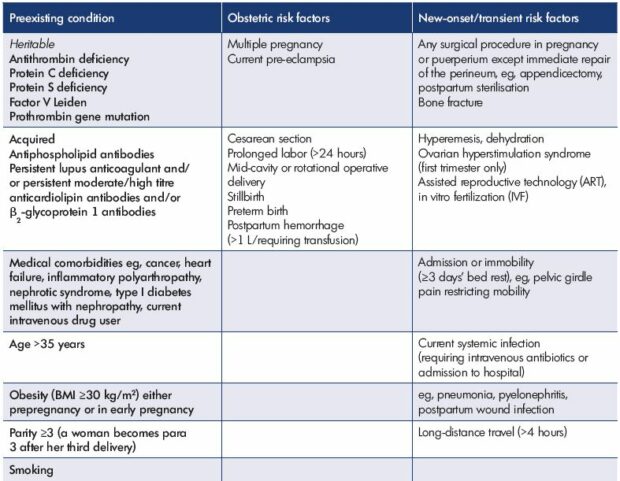 Table I. Risk factors for venous thromboembolism.
From reference 30: Royal College of Obstetricians and Gynaecologists.
https://www.rcog.org.uk/globalassets/documents/guidelines/gtg-37a.pdf. 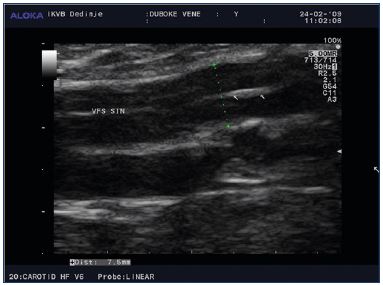 Figure 4. Postphlebitic syndrome in a superficial femoral vein in
a breastfeeding patient.

In women who have received VTE thromboprophylaxis previously, prophylaxis should be started as early as possible during pregnancy, while women without a previous VTE, but with 3 other risk factors, antenatal prophylaxis can begin at 28 weeks of gestation (grade B, grade C).

When evaluating thromboprophylaxis interruption, women receiving antenatal low-molecular-weight heparin who are having an elective cesarean section should receive a thromboprophylactic dose of low-molecular-weight heparin 1 day before delivery, and, on the day of delivery, any morning dose should be omitted and the operation performed that morning. After delivery, if there is no postpartum hemorrhage and regional analgesia has not been used, the first thromboprophylactic dose of low molecular- weight heparin should be administered as soon as possible. If spinal anesthesia was used, low-molecular weight heparin should be given after 4 hours or after the epidural catheter has been removed; the catheter should not be removed within 12 hours of the most recent injection. If a hemorrhagic problem develops while taking low molecular- weight heparin, the treatment should be stopped and a hematology specialist should be consulted. In women with a VTE after a cesarean section, others risk factors may also be identified, ie, severe pre-eclampsia, reoperation, twin pregnancy, obesity, immobilization, and placenta praevia.34 The risk of a VTE after a cesarean section is at least 2 times higher than after a vaginal delivery.25 In addition, the risk of a VTE is after an emergency cesarean section is 2 times higher than after an elective cesarean section, which is 4 times than the risk after a vaginal delivery.35

Warfarin has been described to cross the placenta, which increases the risk of congenital abnormalities in approximately 5% of fetuses exposed between 6 and 12 weeks of gestation.36-40 According to the official guidelines, using warfarin during pregnancy is restricted to the few situations where heparin is considered unsuitable, eg, women with mechanical heart valves (grade B). Women receiving long-term anticoagulation with warfarin can be converted from low-molecular-weight heparin to warfarin postpartum when the risk of hemorrhage is reduced, usually 5 to 7 days after delivery. Warfarin is safe while breast feeding. 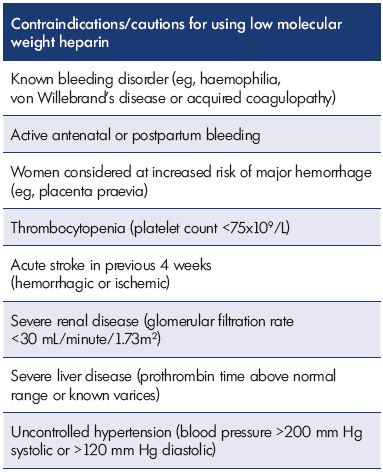 Although treatment with warfarin is effective, it has numerous limitations, such as a slow onset and offset of action, dosage variations based on differences in dietary vitamin K intake, and multiple drug interactions. To overcome these limitations, new non–vitamin K antagonist oral anticoagulants (NOACs) have been developed to replace warfarin in many indications,41-44 including three inhibitors of factor Xa–rivaroxaban, apixaban, and edoxaban– and one inhibitor of thrombin–dabigatran. In contrast to warfarin, NOACs have a rapid onset and offset of action, a more predictable anticoagulant response with no impact from dietary vitamin K intake, and few drug interactions.

NOACs are indicated, among other indications, for preventing VTE and venous thrombosis. Several large trials compared conventional treatments for VTE with dabigatran, rivaroxaban, apixaban, and edoxaban.45-50 In a recent meta-analysis that compared NOACs with warfarin, 24 455 patients with acute VTE were analyzed for recurrent VTE, fatal pulmonary embolism, and all-cause mortality.51 While the final outcomes were not significantly different (ie, lower) in patients treated with NOACs, both the rate of major bleeding was significantly lower in patients receiving NOACs vs those receiving warfarin (risk reduction [RR], 0.60; 95% CI, 0.41-0.88), as was the rate of fatal bleeding (RR, 0.36; 95% CI, 0.15-0.87).51 Overall, for VTE treatment, NOACs are noninferior to conventional therapies; however, they are associated with a lower rate of bleeding.

There is limited data published concerning the use of NOACs during pregnancy. According to the official guidelines,52 oral direct thrombin inhibitors (dabigatran) and antifactor-Xa inhibitors (rivaroxaban, apixaban) are not recommended during pregnancy (Grade 1C). A recent Canadian study that examined the rate and extent of rivaroxaban transfer across the human placenta53 found that rivaroxaban transfer across the term human placenta occurs rapidly from both the mother-to-fetus and fetus-to- mother directions. Still, bearing in mind that rivaroxaban is highly bound to plasma proteins, the authors suggest that the amount of unbound drug that might reach the fetus is probably much lower.53 In a study by Hoeltzenbein et al,54 63 exposed pregnancies where identified among 94 requests concerning rivaroxaban use during childbearing age. Indications for rivaroxaban were VTE, knee surgery, and atrial fibrillation. After surveillance of 37 pregnancies, there were 6 spontaneous abortions, 8 elective terminations of pregnancy, and 23 live births.54 After recognition of pregnancy, most women discontinued the use of rivaroxaban, mostly in the first trimester, except for one woman that continued until gestational week 26. There was only one case of bleeding in the whole series. There is an obvious risk of taking dabigatran, rivaroxaban, or apixaban during pregnancy and breastfeeding; therefore, larger prospective studies concerning this issue are expected.

Therapy for venous insufficiency during pregnancy is mainly directed toward compression stockings and venoactive agents. Some studies showed that compression stockings improved venous blood flow of the lower extremities with a simultaneous decrease in the lumen diameter of the superficial femoral and common femoral veins in patients during late pregnancy and early postpartum.55-57 In patients with known chronic venous insufficiency, compression stockings should be initiated at the start of pregnancy and after the appearance of the first venous disorder in patients with no previous venous abnormalities.58 According to the official guidelines,30 compression therapy of appropriate size and graduated compression pressure of 14 to 15 mm Hg at the calf is recommended during pregnancy and the postpartum period for women who are hospitalized and have a contraindication to low-molecular-weight heparin (grade D), which refers to women who are hospitalized after a cesarean section (combined with low-molecular weight heparin), women considered to be at a particularly high risk of a VTE, and women travelling long distances, ie, >4 hours (grade D).

Venoactive agents are very useful for treating the symptoms of venous insufficiency.59 So far, flavonoids have not shown teratogenic effects, and updated guidelines on the management of chronic venous disorders recommend the use of flavonoids because the benefits clearly outweigh the risks and there is moderate-quality evidence (grade 1B).59 Flavonoids can be used to treat pregnant women with a gestational age greater than 12 weeks; however, the use of flavonoids is not recommended while breastfeeding.