Analysis of microcirculatory changes in chronic venous disease (CVD) is challenging because we lack practical tools. The orthogonal polarization spectral (OPS) imaging technique used in the Cytoscan is less than ten years old and seems to be suitable for studying patients suffering from CVD. The Cytoscan has a small handheld probe which can be noninvasively applied to all body surfaces.

CVD was studied using the OPS technique for the first time in the Laboratory for Research in Microcirculation at State University of Rio de Janeiro, Brazil. Five microcirculatory parameters were correlated with the clinical-etiologicanatomic- pathophysiologic (CEAP) classification (C0 to C5). A new microcirculatory index (MI) with stages I, II and III (mild, moderate and severe microangiopathy, respectively) based on previously cited variables was used to investigate the severity of the microcirculatory damage. Movies of the internal perimalleolar region were analyzed using the CapImage software.

The MI showed that 27 out of 30 patients classified as CO and C1 had mild microangiopathy, and 28 out of 36 of C3 to C5 had severe impairment of the microcirculation. Moderate microangiopathy was almost homogeneously distributed among all CEAP classes, with the exception of C0.

In conclusion, CM and CD measurements detected microcirculatory alterations as early as CEAP class C2. The suggested MI could be used in future clinical trials to quantify microcirculatory impairment associated with the various CEAP classes and to evaluate drug therapy.

Chronic venous disease (CVD) of the lower limbs is a common public health problem worldwide. Its many clinical presentations indicate its complexity. CVD is multifactorial and over the years has a highly negative impact on quality of life because of leg ulceration, pain, and sick leave.

Epidemiological studies demonstrate growth in CVD worldwide. In the Edinburgh Vein Study, varicose veins were noted in 40% of men and 32% of women in the United Kingdom.1 Scuderi et al used the CEAP classification to study the incidence of venous disease in Brazil.2 The percentage of symptomatic patients suffering from CVD varies between 25% to 84% depending on the population studied, age range, and severity of the disease.3 Population studies such as Framingham4 and San Valentino5,6 have reported a CVD prevalence of 5% to 15% in men, 3% to 29% in women, and an incidence of leg ulcer of 0.03% to 2% of the population per year.7 The concept of venous microangiopathy as one of the first signals, resulting from venous hypertension, enables quantification of microcirculatory parameters in monitoring of the severity of CVD.8,9 High venous pressure is transmitted to the capillary bed and results in chronic damage and microcirculatory dysfunction. Cutaneous nutritive capillaries progressively become enlarged and tortuous and form masses or skeins described in the literature as “glomerulus-like” capillaries.10,11 Capillaries of patients with CVD have an increased permeability to large molecules as a result of stretched interendothelial pores leading to an irregular capillary lumen.12 The persistence of venous stasis and hypertension results in chronic inflammation of the capillary bed and surrounding tissues13 and edema.14 The reduction in the number of capillaries leads to trophic disorders and leg ulceration.15,16 Several methods have been used to visualize the microcirculation directly or indirectly, like laser Doppler fluxometry,17 videocapillaroscopy,18 plethysmography,19 and fluorescence videomicroscopy.20 Some CVD classification methods have been developed in order to compare the outcomes of various treatment attempts. Examples include the CEAP classification, the Venous Clinical Severity Score (VCSS) and Venous Segmental Disease Score (VSDS). These three methods base their findings mainly on venous imaging by duplex scanning and phlebography.21 Although the CEAP classification was revised in 2004,22 with enhancement of the pathophysiologic analysis, we still lack a larger microcirculatory study. Orthogonal polarization spectral (OPS) imaging is the latest technique used to visualize the microcirculation. It is based on intravital microscopy with incident polarized light that produces reflected depolarized light from hemoglobin. Cytoscan implements the OPS technique and was described for the first time in 1999.23

The Cytoscan can be used for noninvasive studies of all tissue surfaces without the use of fluorescent dyes, and OPS imaging has been validated in comparison with conventional videocapillaroscopy and intravital microscopy. 24,25 Nowadays it is possible to quantify microangiopathic changes related to CVD with Cytoscan. It is important to evaluate the perimalleolar area in CVD patients as it is a gaiter zone where stasis ulcers usually appear.14

Our laboratory was the first to use OPS imaging to assess the cutaneous microcirculation of the perimalleolar area in female patients at different CEAP stages of the disease, compared with healthy subjects (control group). We described a new microcirculatory index (MI) to quantify and grade microangiopathy.26 The following sections summarize the main findings of our study.

Patients and methods
Forty-four women (87 lower limbs) aged 48±8 years (range 28 to 60 years) were selected and divided into six groups based on the CEAP classification:22,27,28 C1 (n=21), C2 (n=20), C3 (n=17), C4 (n=18), C5 (n=11). Thirteen healthy subjects (n=25) were chosen as controls. All individuals signed a written consent form and were evaluated through a research protocol in the Venous Disease Outpatient Unit of the Medical School and Laboratory for Research in Microcirculation. The research project was approved by the Ethics Committee of the State University of Rio de Janeiro (UERJ).

Exclusion criteria included arterial ischemic disease with a supramalleolar Doppler index lower than 0.8 and all diseases that could influence the results. Cytoscan cannot visualize the microcirculation of patients with phototypes 5 (dark brown) and 6 (black) according to Fitzpatrick,29 and such patients were therefore excluded from the study. Patients were assigned to groups on the basis of Doppler ultrasonography and clinical examination of the lower limbs. Deep venous thrombosis and venous valve incompetence were mapped by duplex scanning.

Analysis of the microcirculation
We prepared a 7.5 cm2 (width 3.0 cm, height 2.5 cm) plastic rectangular mask pierced by 10 small windows of the size of the Cytoscan probe (Cytometrics Inc, Philadelphia, PA, USA). This probe was placed above the internal malleolus using an X-Y positioning system built into the platform. A robot was created to hold the Cytoscan probe in the same position without excessive pressure on the skin to avoid interruption of blood flow (Figure 1).

Each field was recorded for 30 seconds in S-VHS format with a Philips VR999 video recorder (São Paulo, SP, Brazil), and the microcirculation images were analyzed using CapImage software.30

Five microcirculatory parameters were chosen to investigate CVD: functional capillary density (FCD, number of capillaries with red blood cell flow per mm2), diameter of dermal papilla (DDP, µm) to quantify edema, the largest diameter of the capillary bulk (DCB, µm) to assess its degree of change, capillary limb diameter (CD, µm) to evaluate diameter changes, and capillary morphology (CM, % of abnormal capillaries in the total number of capillaries in each field) (Figure 2). In CM, a hairpin pattern with more than two crossings was deemed pathological.31 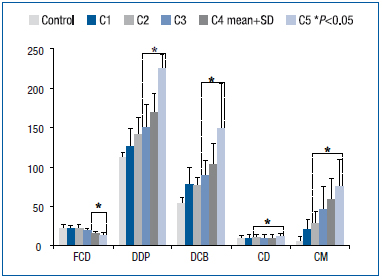 Software Statistica (Statsoft Inc., Tulsa, OK, USA) was used for ANOVA and Tukey tests. All results are expressed as mean±SD. 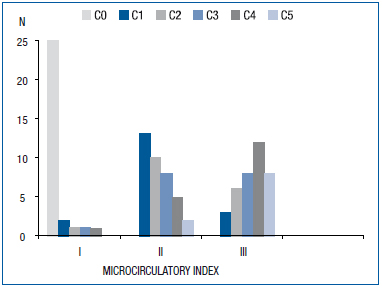 Virgini-Magalhães and co-workers found in patients with CVD that microcirculatory parameters (FCD, DDP, DCB, CD and CM) could be correlated with the CEAP classification. Also, these parameters showed different levels of statistical significance compared with healthy controls. For example, CM was statistically significant (P<0.05) from C2 to C5 (Figure 2). Finally, a microcirculation index was created to reorganize patients from C1 to C5 into three new categories according to microcirculatory impairment (mild, moderate, and severe microangiopathy). The complexity of CVD prompted attempts to classify its severity, and the CEAP classification, and VCSS and VSDS scores are frequently used to produce an instantaneous picture of venous pathology. So far, very few attempts have been made to quantify microangiopathy, so a noninvasive test to achieve this would be useful to stage the disease and perhaps establish the prognosis. This quantification was possible with OPS imaging. Cytoscan (OPS) is a small easy-to-use handheld device for noninvasive recording of very stable and artifact-free images of the microcirculation. The microcirculatory approach in CVD is not new. Howlader and Coleridge- Smith used capillary videomicroscopy to assess lipodermatosclerosis32 in C4a patients. Also, fluorescence videomicroscopy is an additional diagnostic form of capillaroscopy where sodium fluorescein is injected into the brachial vein to study microvascular permeability. However, this method is invasive and there is a real risk of anaphylactic shock.33 Until now, the best ambulatory methods to examine the microcirculation in patients have been nail fold videocapillaroscopy34,35 and laser Doppler flowmetry.36 Cytoscan therefore shows great promise in microcirculatory studies. OPS imaging has already been tested and validated by many authors.25,37,38 We have developed in our lab, the Laboratory for Research in Microcirculation at State University of Rio de Janeiro, an OPS imaging method to observe the cutaneous microcirculation in patients with CVD. We developed a motorized robot to hold the Cytoscan probe and a platform on which the foot is placed to reproduce the same perimalleolar region during measurements (Figure 1).

Microcirculatory parameters (FCD, DDP, DCB, CD and CM) were statistically significant within different CEAP classes. Lower significant FCD values started at C4. Decreased FCD leads to tissue ischemia and consequent ulceration.15 The methodology used (room temperature, time to rest, etc) explains differences between our FCD values and those of Hasselbach et al.39 The diameter of the dermal papilla and the largest diameter of the capillary bulk (DDP and DCB) changed from C3, but capillary limb diameter and capillary morphology (CD, CM) were already altered from C2, and so are the best parameters for evaluation of CVD from its early stages.

The proposed MI combines five microcirculatory parameters. Functional capillary density allows the functional analysis of the microcirculation, while the remaining four parameters (DDP, DCB, CD, CM) are used for morphological evaluation of the microcirculation. Another interesting functional variable not chosen in this study to define MI is red blood cell velocity. As the dermal papilla shows only the top of the capillaries, it is almost impossible to determine the velocity precisely. Greater magnification is needed, but a suitable microscope is not commercially available. An MI defined as I (mild microangiopathy) covered most patients in classes C0 and C1, and an MI of III (severe microangiopathy) was applicable to 28 of 36 patients in classes C3 to C5. However, an MI of II applied to patients in all classes except C0. Therefore, MI may be used differentiate patients with mild and severe CVD according to the CEAP classification, but further investigation is needed to clarify its utility in class II.

It was demonstrated that 9 patients classified as C1 and C2 already had severe microangiopathy and it would be very interesting to see, in a prospective study, if microcirculatory alterations of these patients lead to greater disease progression (Figure 3). Cytoscan can be used to compare microcirculatory parameters, in association with the CEAP classification, and so drug efficacy can be assessed. Laser Doppler flowmetry has already been used to measure the effects of drugs on skin flow in the internal perimalleolar region.9,40

In conclusion, the Cytoscan device can be used for OPS imaging of the microcirculation. We propose a new microcirculatory index for use in defining the prognosis of chronic venous disease.