Ultrasound-guided foam sclerotherapy (UGFS) is presently challenging other operative varices treatment. Randomized controlled trials are considered to be solid, evidence-based studies. In varices management, many randomized trials have been published in order to try to determine what the best treatment option is, and they are discussed in this review. Other randomized controlled trials dealing with varices sclerotherapy are analyzed including: (i) sclerosing agent versus placebo; (ii) liquid versus foam; (iii) the type, dose, and concentration of sclerosing agent; (iv) sclerotherapy in patients with or without thrombophilia; and (v) postsclerotherapy compression. The conclusions are that UGFS is both efficient and safe. Ideal sclerosing agent and dose as well as postsclerotherapy compression are still under discussion. Compared with other treatments, ultrasound-guided foam sclerotherapy is credited with more frequent recurrences, but they are easy to treat by redoing the injection with good success. Presently, in terms of cost effectiveness, UGFS is in a perfect position.

In the last decade operative treatments for varices have been enriched with new methods. Presently, procedures for varicose vein (VV) treatment can be classified into 2 groups:1 (i) open surgery; and (ii) endoluminal procedures.

The second one groups classical open surgery together with SFJ preservation or not, +/- perforator ligation, +/- incompetent tributary phlebectomy.

2. Endoluminal procedures including thermal ablation (laser, radiofrequency, steam, and cryostripping) and chemical ablation (glue and sclerotherapy)
The latter, although used for several centuries, has been drastically improved by ultrasound guidance and by delivering the sclerosing agent combined with gas to form foam. (Figures 1-6). Ultrasound-guided foam sclerotherapy (UGFS) is gaining favor among phlebologists. Many articles on UGFS including consensus analyses, meta-analyses, observational studies, and randomized controlled trials (RCT’s) have been published. The American College of Chest Physicians has established recommendation grades that are adopted and used worldwide (Table I).2-5 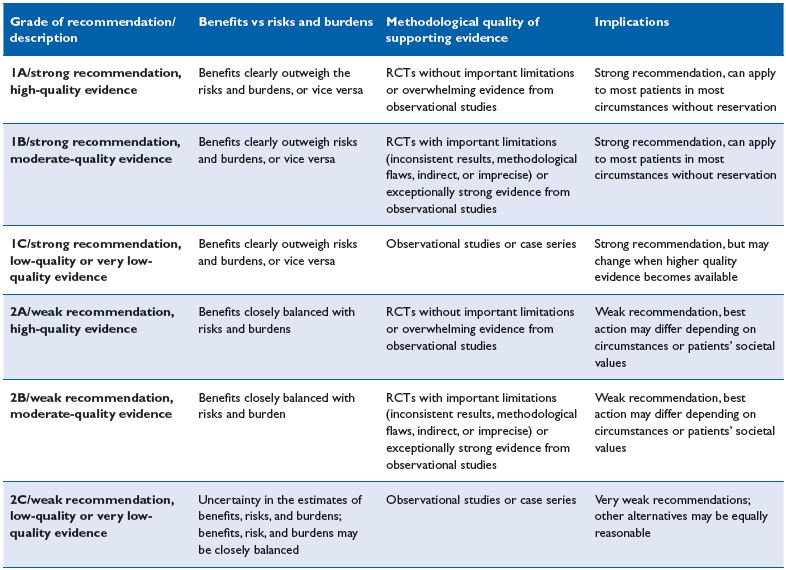 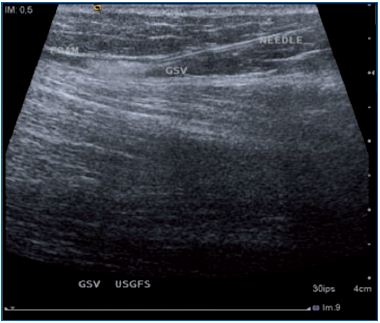 Figure 1. The needle and the foam injected in the great
saphenous vein are clearly identified. 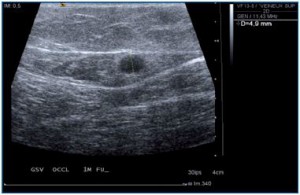 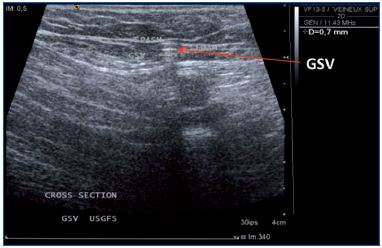 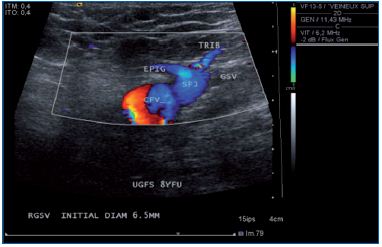 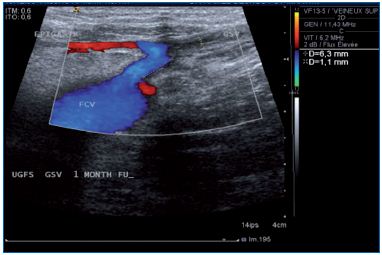 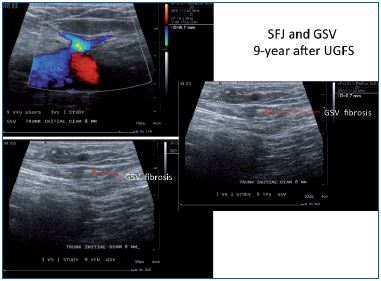 To report and review RCT’s on sclerotherapy for treating VV.

A PubMed search was conducted in English and French for the years 2000 to 2012 with the keywords sclerotherapy, foam, ultrasound-guided foam sclerotherapy, and their counterparts in French. Only articles, but not meeting abstracts, dealing with lower limb VV were selected. RTC’s identified were classified into distinct groups: (i) sclerosing agent versus placebo; (ii) liquid versus foam; (iii) sclerosing agent usages (type, dose, and concentration); (iv) sclerotherapy in patients with thrombophilia; (v) postsclerotherapy compression; and (vi) outcome after sclerotherapy versus other treatment procedures.

Comment. The trial has demonstrated that polidocanol is efficient at closing the vein and modifying hemodynamics by measuring the venoarterial flow index by using ultrasound investigation.

Comment. German, Japanese, and French articles related to Varices (C2-C6) come to the same conclusions; foam is more efficient than liquid in terms of vein occlusion with polidocanol as the sclerosing agent by using the EASY-FOAM-kit with a 2-year follow-up or Tessari method after 1 year. Unfortunately, the 4 RCT’s did not provide clinical data except for a quality of life survey in the German article. The Catalan RCT is difficult to interpret, as the group is heterogeneous and the methodology questionable, but the outcome seems to be in favor of foam, although at 1 year there is no difference in terms of patient satisfaction. In conclusion, if sclerotherapy is considered for treating varices, the use of UGFS deserves a strong grade 1B recommendation.

Comment. Four articles (3 RCTs), without major bias, provided the same conclusion. Results obtained by using either 1% or 3% Polidocanol are equivalent, although the German study shows a trend that favors the 3% concentration in terms of cosmetic results at 1-year follow-up (P=0.569). Presently, there is no RCT comparing the most commonly used sclerosing agents, ie, polidocanol and tetradecyl sodium sulphate. In conclusion, if Polidocanol is used for treating varices by UGFS at a concentration of 1%, then it deserves a strong grade 1B recommendation.

Comment. The 3 available RCTs assessed have different elements. The first trial perfectly documented recommending a short-term compression after classical surgery.16 Nevertheless, the type of compression prescribed in this trial is questionable: bandages followed by use of antithrombotic stockings. In conclusion, if compression is considered after UGFS treatment, short term compression is recommended, but related to above remarks, the grade of recommendation is weak, we suggest grade 2B. 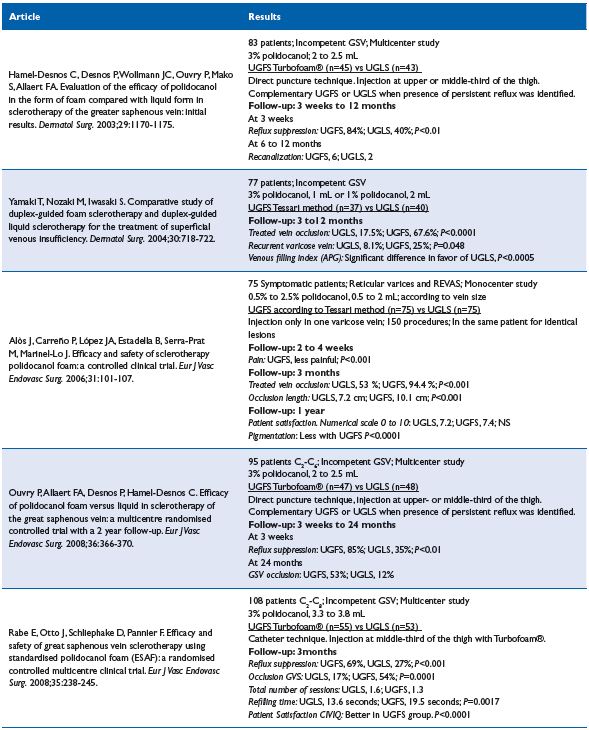 The second trial questions compression usefulness after UGFS.17 Although many parameters are assessed, the cohort studied is disparate both in terms of clinical class (C) as well as veins treated. The third trial compared biological changes in inflammation and coagulation between 2 post UGFS groups, one treated with compression and the other treated without compression therapy. No significant biological changes were observed between the 2 groups.18 Several observational studies argue for compression after sclerotherapy, but all of them used a liquid sclerosing agent.19-21 In conclusion, these trials received only a weak grade 2B recommendation, suggesting no compression is needed after UGFS.

Comment. In two well-matched groups, 1% polidocanol was used for treating patients that were prospectively randomized to receive either visual foam sclerotherapy (VFS) alone or VFS combined with UGFS of the great saphenous vein (GSV). The results show that UGFS + VFS and VFS alone are equally effective for the treatment of GSV reflux, despite the lower volume of foam used for VFS alone. However, as the authors stated some parameters were not taken into account including optimal foam volume, injection techniques, vein diameter, and gas fabrication. In conclusion, no recommendation can be drawn from this trial. 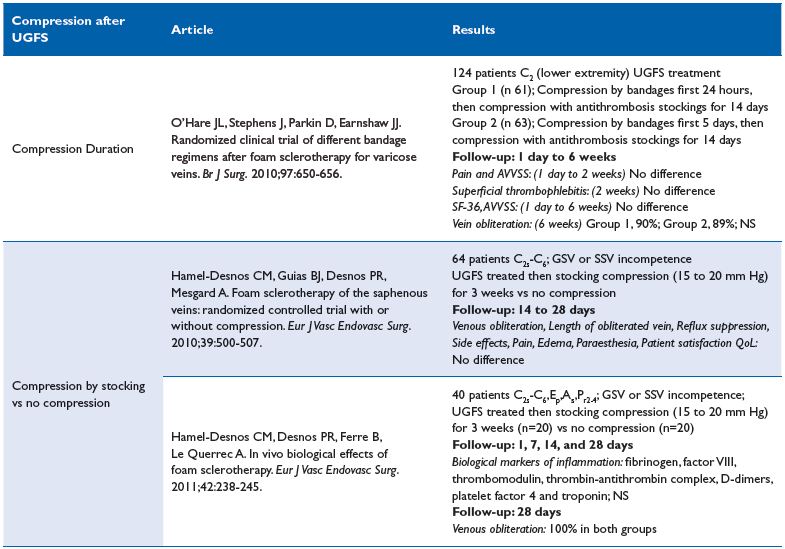 Sclerotherapy of varicose veins in patients with documented thrombophilia23

Comment. This study suggests that in the three most common forms of thrombophilia; sclerotherapy in combination with thromboprophylaxis, can be performed safely. Prophylaxis with low molecular weight heparin is easier to use than warfarin. In conclusion, this RCT can be graded 1B.

Comment. The main interest of Belcaro’s article is the 10-year follow-up duration, but its design is deceptive for various reasons. First, patients are distributed in 6 groups where procedures are either obsolete (in group 3, the technique used was isolated high ligation [HL]) or poorly described (in group 6, the sclerosing agent was tetradecyl sodium sulphate combined with the tensoactive agent J&J-93FA). In the follow-up, ultrasound examination and ambulatory venous pressure was routinely performed for measuring refill time, which is unusual and invasive; consequently, it is surprising that patients accepted this investigation. Furthermore, only noncomplicated varices (C2) were enrolled and we know that C2 refill time is usually not strongly modified. Additionally, the number of patients assessed at year 10 is not documented. To conclude, it looks difficult to draw valid conclusions from Belcaro’s article.24

The second article (Wright) compared VarisolveR with either open surgery or sclerotherapy.25 Unfortunately, open surgery involves various procedures including isolated HL, HL+stripping, and phlebectomy rendering the outcome difficult to assess. Nevertheless, the authors concluded that surgery was more efficacious. VarisolveR versus sclerotherapy was conclusive in favor of VarisolveR, but the sclerotherapy group was not homogenous as both liquid and handmade foam as well as polidocanol or sodium tetradecyl sulphate were used.25

Three other articles combining HL+UGFS and comparing the combination with conventional open surgery concluded more or less in favor of HL+UGFS, but followup was only a 6-month maximum duration.26-28

Conversely, Kalodiki’s article is a fully documented 5-year follow-up RCT, which concluded that treatment was equally effective between the surgical and foam groups, as demonstrated with the venous clinical severity score (VCSS), venous segmental disease score (VSDS), and the physical component of the SF-36 score improvements. The Aberdeen Varicose Vein Questionnaire (AVVQ) was significantly better in the surgery group, but the margins were small and this may not have any clinical significance.29 In addition, foam is less expensive; therefore, the cost effectiveness ratio is in favor of foam. It is important to keep in mind that in the above mentioned articles, UGFS was combined with HL.26-29 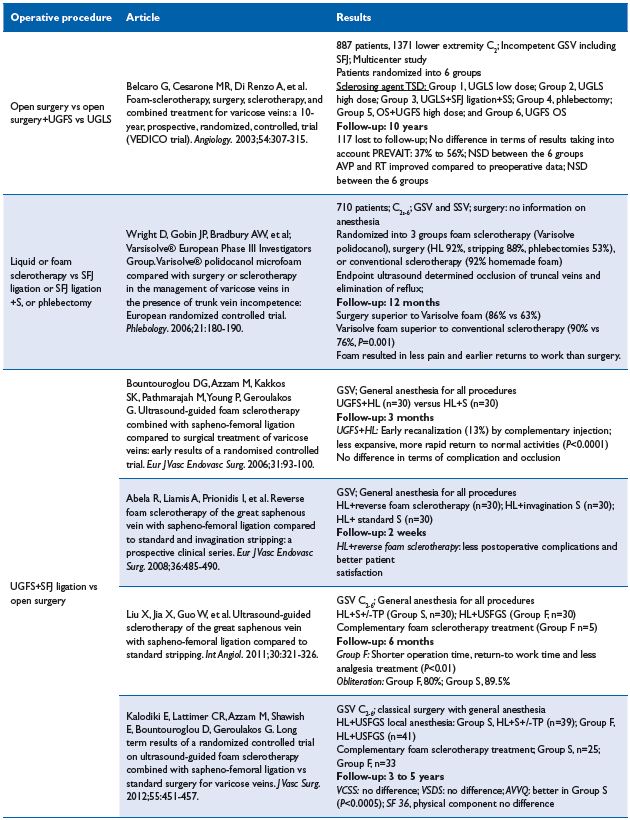 Does UGFS without HL provide the same results or, more importantly, are pulmonary embolisms (PE) more frequent. Two RCT’s without HL do not mention immediate postoperative PE.30-31 Shadid’s article provides a middle term outcome.31 There is no difference in terms of clinical results, but presence of reflux is significantly more frequent after UGFS, but conversely total cost is in favor of UGFS. 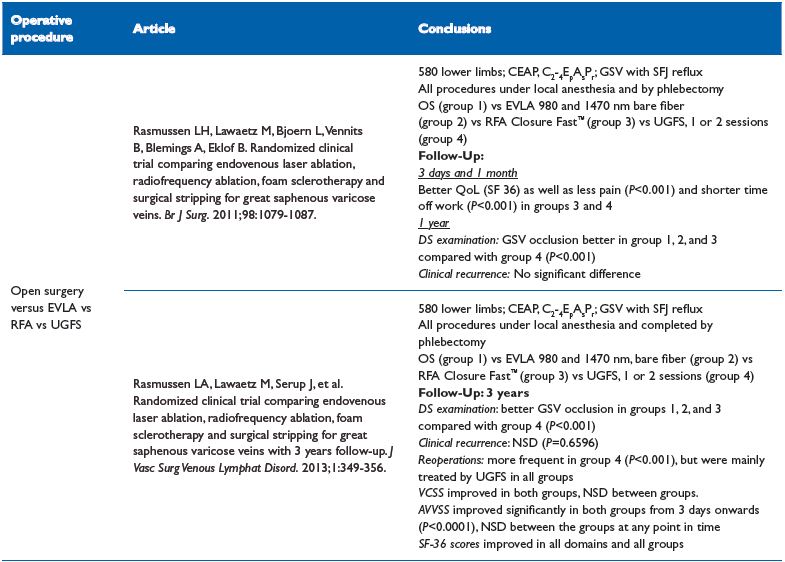 Comment. This trial, based on 2 articles, favors UGFS, but the follow-up was short (3 months), besides the EVLA fiber was a bare one, and we know from various studies that jacket-tipped, radial fiber, or tulip–assisted EVLA improve the immediate postoperative course.35-38 Lattimer’s RCT conclusion contradicts the grade 1B recommendation from the Society for Vascular Surgery and the American Venous Forum. For treatment of the incompetent saphenous vein, they recommend endovenous thermal ablation over chemical ablation with foam.

EVLA vs radiofrequency ablation vs UGFS vs surgical stripping39,40

These two RCTs are for a five-year ongoing trial. Results after one year showed that all treatments are efficacious with a higher technical failure rate after foam sclerotherapy.39 Laser and foam sclerotherapy leads to faster recovery, less postoperative pain, and superior quality of life scores compared with laser and surgery.39

A 3-year follow-up duplex scan confirms that the GSV occlusion rate is lower in the UGFS group (P<0.001),40 but there was no difference in terms of clinical recurrence; VCSS, AAVVQ, and SF-36 scores. Reoperations were more frequent in UGFS group (P<0.001), but interestingly, recurrence were mainly treated by UGFS in all groups.40

Sclerotherapy versus other procedures for ablation of varices

There are no RCTs comparing sclerotherapy with open surgery preserving the saphenous trunk, other thermal ablation techniques (radiofrequency, foam), or a new technique such as ClariveinR41 or SapheonR42

Although RCTs remain the best tool for comparing clinical effectiveness, as mentioned in Grade system, nevertheless, RCTs must be evaluated carefully. Skepticism about conventional RCTs in nonpharmacological interventions (eg, sclerotherapy) remains, and expertise-based RCTs are suggested as an alternative where participants are randomized to clinicians with expertise in intervention A or clinicians with expertise in intervention B, and the clinicians perform only the procedure for which they are the expert.43

Accurate analysis of the presented RCTs is difficult as hidden bias can be hard to identify. For example, in some RCTs, surgery was performed either under local tumescent anesthesia or general anesthesia that may influence short-term evaluation.

Twenty-two RCTs (27 articles) and an analysis of observational studies were evaluated, which provided some conclusions regarding sclerotherapy. Sclerotherapy is a safe procedure with a low rate of adverse reactions. UGFS is more efficient in terms of obliteration than liquid sclerotherapy, where 1% and 3% polidocanol foam demonstrated equivalent efficacy in GSV treatment when the trunk was less than 8 mm in diameter. Benefits from optimal compression are still being debated. UGFS can be performed safely in combination with thromboprophylaxis in patients with thrombophilia. Compared with other operative treatments, UGFS is credited with more frequent recurrences, but they are easily treated by reinjection with satisfactory results. Presently, UGFS is cost effective when compared with other operative procedures for treating varices.