Randomized controlled trials in the treatment of varicose veins (2)

Download this issue Back to summary
This is the second part of a review on randomized controlled trials of the treatment of varicose
veins by open surgery or endovenous ablation. The first part of this review was published in
Phlebolymphology. 2011;18:(4)196-207
Michel PERRIN
Vascular Surgery
Lyon, France
Bo EKLÖF
American Venous Forum
Helsingborg, Sweden

Randomized controlled trials (RCTs) remain the most reliable source of evidence.1 We have therefore analyzed RCTs of treatment of varicose veins published since 1990 and have classified them by topic and added a brief comment. We may, nevertheless, have missed some and apologize to any authors who have been overlooked. We successively consider and comment upon: 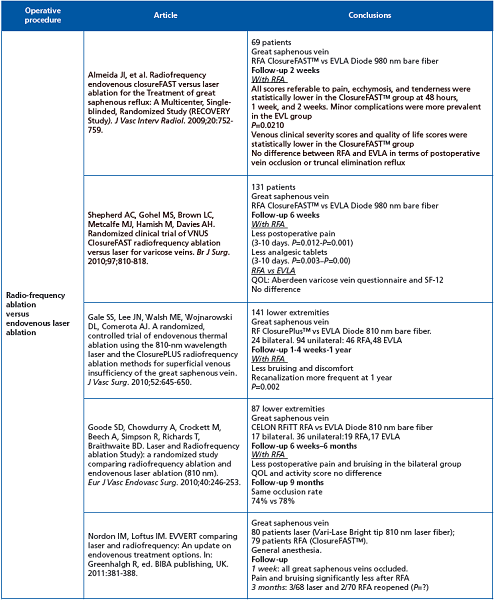 At 72 hours, 100% closure was observed in both groups. At 1 week the pain and bruising scores were identical in the two groups. The results suggest that jacket-tipped laser fibers generate a uniform thermal reaction similar to that generated by ClosureFASTTM. Kabnick’s conclusion was that the most current radiofrequency ablation and jacket-tip laser methods and devices are indistinguishable in terms of efficacy and short-term side effects. With procedure time and tumescent anesthesia also equivalent, these procedures present no genuinely significant differences from the patient’s point of view.

When comparing 1500 nm vs 980 nm bare fibers, immediate post operative course was better with 1500 nm, with less side effects including induration, pain, and better quality of life. At 6 months, the occlusion rate was similar in both groups. 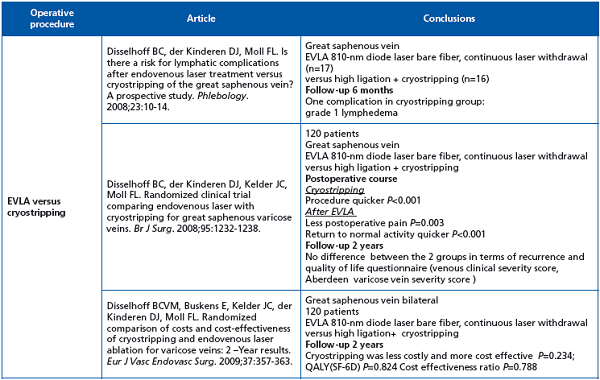 Fortunately, the authors of a recently published and fully documented randomized clinical trial with 5-year follow-up concluded that the treatment was equally effective in the surgical and foam sclerotherapy groups, as demonstrated by improvements in the Venous Clinical Severity Score, Venous Segmental Disease Score, and the physical component of the SF-36 score. The Aberdeen Varicose Vein Questionnaire score was significantly better in the surgery group, but the margins were small and this may not have any clinical significance. Given that foam is less expensive, one can conclude that the cost effectiveness ratio is in favor of foam.

The only surprising point in this trial is the complementary high ligation in the foam procedure as it is generally admitted that high ligation enhances neovascularization at the groin. 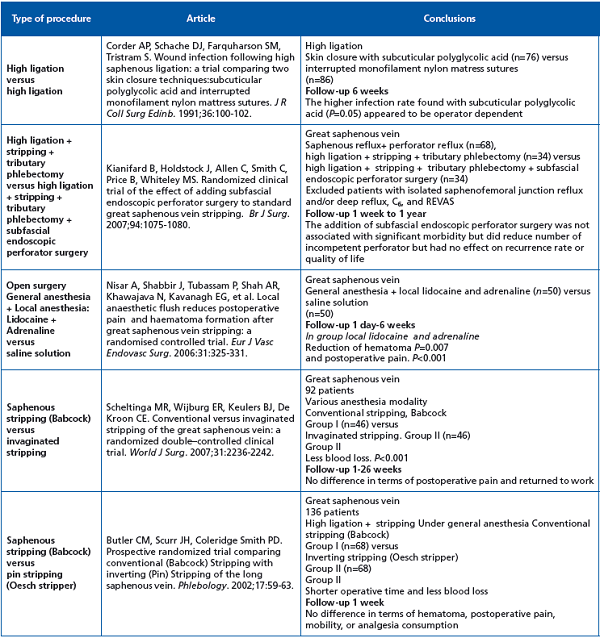 This table lists variations in classic open surgery including groin closure, local anesthesia, stripping modalities, and combination with subfascial endoscopic perforator surgery. The last two are the most valuable. Surprisingly, there is no difference between classic and inversion stripping in terms of postoperative complications. More interesting is Kianifard’s randomized clinical trial showing that the addition of subfascial endoscopic perforator surgery made no difference in terms of recurrence and quality of life, but this study was selective since it excluded open ulcer and REVAS patients, and the follow-up was short (1 year).

We still lack outcomes of a long-term randomized clinical trial with two arms-saphenous ablation with and without perforator ablation in primary disease.

The final conclusions in the Society for Vascular Surgery/American Venous Forum guidelines for treatment of varicose veins published in Journal of Vascular Surgery in May 2011 are as follows:4

1. Because of the minimally invasive nature and similar or better early-term and equivalent midterm results, endovenous thermal ablation should be recommended over open surgery as the first line of treatment of varicose veins associated with axial reflux.

2. The committee also recognized that the results of foam sclerotherapy have improved but are not yet equivalent to those obtained after endovascular or open surgery.

4. This is the only randomized clinical trial comparing the four operative procedures for treating varices. The study has been well conducted and is fully documented. Results after one year showed that all treatments are efficacious, with a higher technical failure rate after foam sclerotherapy; radiofrequency ablation and foam sclerotherapy lead to faster recovery, less postoperative pain, and superior quality of life scores compared with endovenous laser ablation and open surgery. The conclusions are clear, however the follow-up is short and a bare laser fiber was used (See Table X comments). A 5-year followup is ongoing.

Three recently published meta-analyses on the treatment of varicose veins2-5 refer to the need to conduct more RCTs to evaluate the efficacy of new procedures. In a 2008 meta-analysis of radiofrequency ablation (RFA), endovenous laser ablation (EVLA), and foam sclerotherapy, Luebke and Brunkwall compared these procedures with conventional surgery and found that RFA was inferior to EVLA and foam sclerotherapy in saphenous occlusion rate, phlebitis, DVT, and paresthesia.5 EVLA had the highest occlusion rate and least recurrence compared with RFA and foam sclerotherapy. Luebke and Brunkwall concluded that large, high-quality, prospective RCTs comparing endovenous techniques and endovenous techniques with surgery are needed.5 In 2009, van den Bos et al performed a meta-analysis comparing EVLA, RFA, foam sclerotherapy, and surgery.6 The estimated pooled success rate at 3 years was highest for EVLA (94%), followed by RFA (84%), surgery (78%), and foam sclerotherapy (77%). Van den Bos et al concluded that endovenous thermal ablation and foam sclerotherapy are at least as effective as surgery.6 In a Society for Vascular Surgery/American Venous Forum-sponsored meta-analysis in 2011, Murad et al found that surgery was associated only with nonsignificant reduction in varicose vein recurrence compared with EVLA, RFA, or sclerotherapy.7 They concluded that the evidence for the long-term safety and efficacy of surgery in the treatment of varicose veins is of low quality, and that short-term studies support the efficacy of less invasive treatments, which are associated with less early disability and pain.7 This meta-analysis of 60 RCTs published in English since 1990 warrants several remarks: (i) Firstly, when long- or medium-term outcomes comparing new treatment techniques become available, the development is so rapid that the material or device employed in the RCT is no longer used. This point is particularly relevant for thermal ablation (see Tables VIII-X). (ii) Secondly, most new procedures are operator-dependent and when two or more are tested in RCTs it is important that the investigators are well trained in all of them.8 (iii) Thirdly, a brief description of a procedure does not indicate precisely how it was performed. For example, the high ligation + stripping technique has evolved and is now less aggressive and invasive than it was in the past. (iv) Finally, RCTs are important in the evaluation of the outcome of new procedures. Skepticism about conventional RCTs in nonpharmacological interventions such as surgery remains and so-called expertise-based RCTs are suggested as an alternative where participants are randomized to clinicians with expertise in intervention A or clinicians with expertise in intervention B, and the clinicians perform only the procedure they are expert in. One advantage of the expertise-based RCT is that surgeons will perform only the procedure in which they have expertise, avoiding the problem of differential expertise bias. Accurate analysis of the presented RCTs is difficult as hidden bias can be hard to identify.

The conclusion based on the presented RCTs with the caveats mentioned above is that the differences between modern open surgery and the new endovenous procedures are insignificant and that no treatment modality can be recommended as superior to another.