The Clinical Practice Guidelines of The Society for Vascular Surgery and The American Venous Forum, published in the 2011 Journal of Vascular Surgery supplement, is the most complete document on the management of varicose veins ever published in English. It is the work of leading members of the American Venous Forum, who are major contributors to advances in this field. However, most of them are vascular surgeons and this may have influenced their recommendations.

A total of 14 guidelines are recommended or suggested using the recommendation grading system of Guyatt et al. The present article will specifically review these recommendations, bearing in mind that as Europeans we may have some divergence of opinion with our American colleagues.

The Clinical Practice Guidelines of The Society for Vascular Surgery and The American Venous Forum, published in the 2011 Journal of Vascular Surgery supplement, is the most complete document on the management of varicose veins (VVs) ever published in English. It is the work of leading members of the American Venous Forum, whose knowledge in this field is undisputed. However, most of them are vascular surgeons and this may have influenced their recommendations.

The article is 47 pages long and includes:

– 2 figures depicting the superficial, deep, and perforator veins of the lower limbs.

The different levels of evidence-based recommendations as described by Guyatt et al1 (Table I).

• A definition of the major and minor complications of endovenous ablation4 (Table V).

• The main manufacturers of endovenous ablation devices and the laser wavelengths of these devices.

• A comparison of sclerosing agents.

• The indications for sclerosing agents and the concentrations used.

No fewer than 376 references are quoted, a veritable gold mine for readers and fellow writers, especially considering that very few major articles are missing.

In total, 14 guidelines are recommended or suggested using the recommendation grading system mentioned above.1

In this review, we will focus on these guidelines, bearing in mind that our European practice may account for some divergence of opinion with our American colleagues. 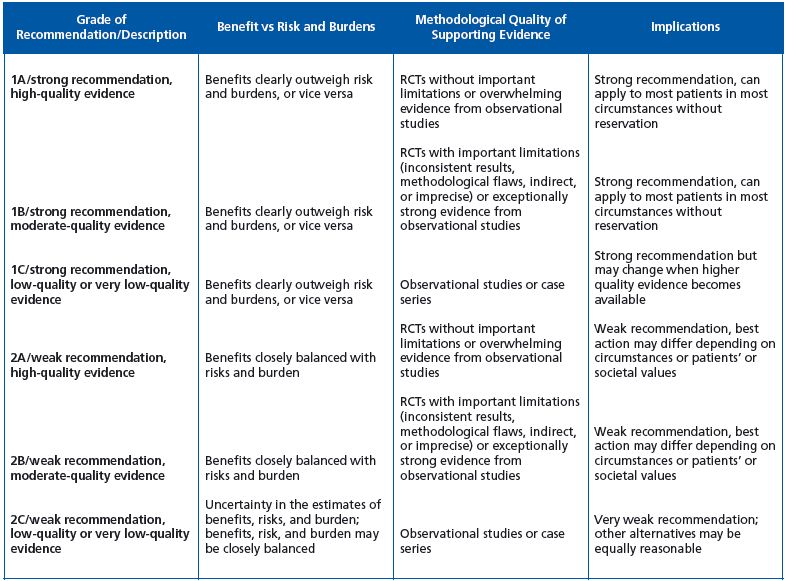 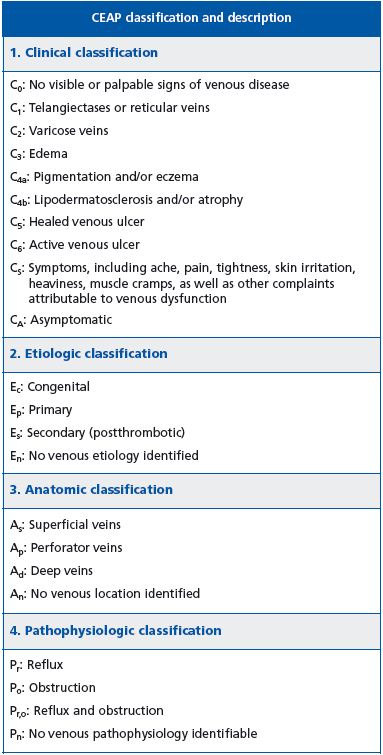 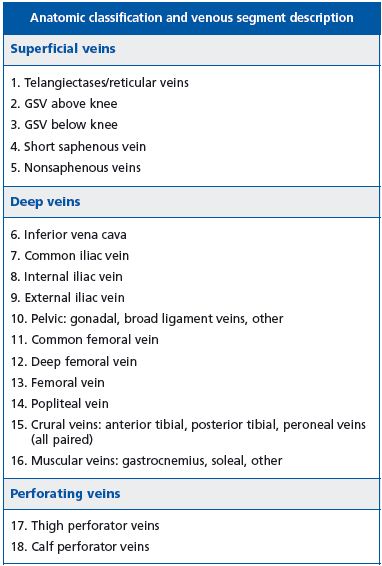 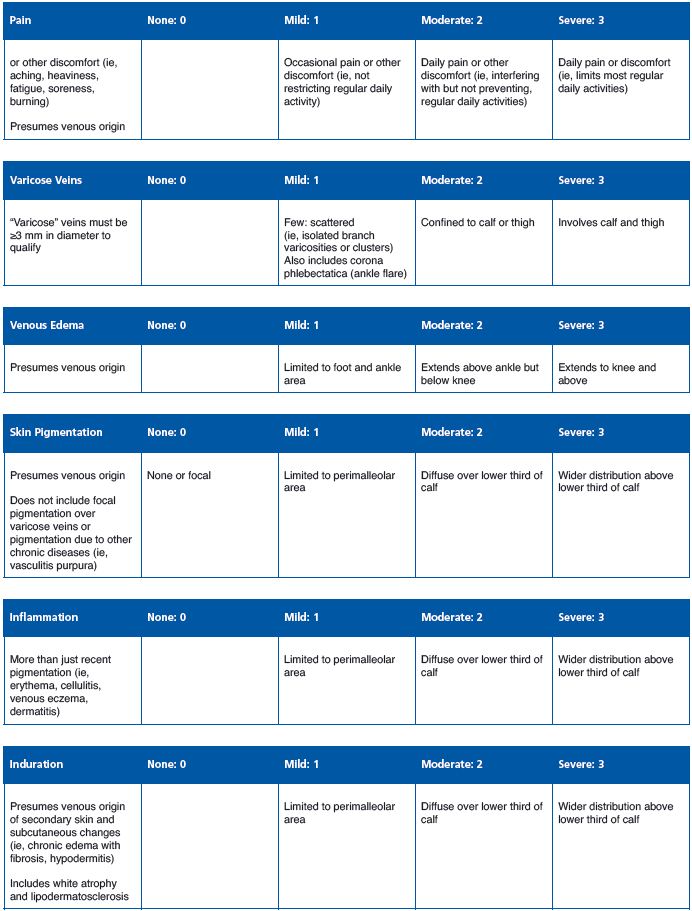 Full agreement with the grade 1A recommendation. 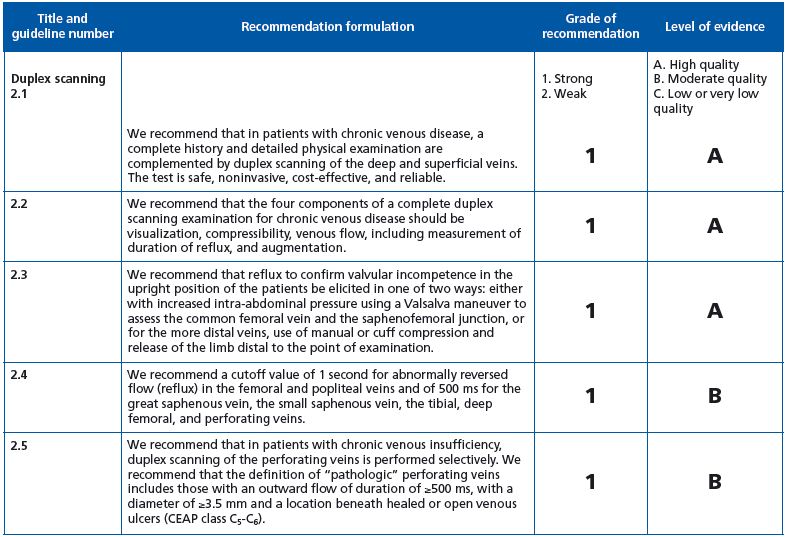 Guidelines 2-1 to 2-4: Full agreement with the quoted recommendations.
Guideline 2-5: grade 1B recommendation. One wonders why the term “pathologic” is restricted to the perforator in the presence of healed or open venous ulcer (VU). Does this mean that in the absence of VU, outward flow is not pathologic? (Figure 1) 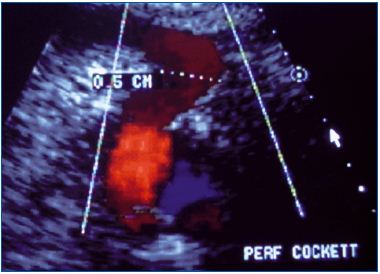 Figure 1. Duplex ultrasound of a large incompetent medial leg
perforator in a patient presenting lipodermatosclerosis (C4b). Why
is this perforator not classified as pathologic?
Guideline 3

Guideline 5.1: Agreement with the grade 1B recommendation although some clinical situations are not sufficiently detailed.

Guideline 6.1: Use of the basic and advanced CEAP classifications according to clinical practice and clinical research.2

We agree with the use of C for clinical class (grade 1A recommendation), but it should be underlined that C2 does not describe in detail the extension and importance of VVs.
Guideline 6.2: We agree with the grade 1B recommendation for the classification of VV etiology as primary, secondary, and congenital, knowing that this classification is not fully satisfying in some other types of chronic venous disease. It seems advisable to rename “secondary” as “postthrombotic.”

Four recommendations are listed in this section
Guideline 7.1: As previously stated in various articles—including one published in VEINews on March 22nd, 2011— the revised venous clinical severity score is an excellent tool in chronic venous insufficiency patients, but its effectiveness in C2 patients including those who are symptomatic does not deserve a grade 1B recommendation. Guidelines 7.2-7.4: Full agreement with the grade 1B recommendation.

Guidelines 8.1 and 8.2: Full agreement with the grade 2B recommendation 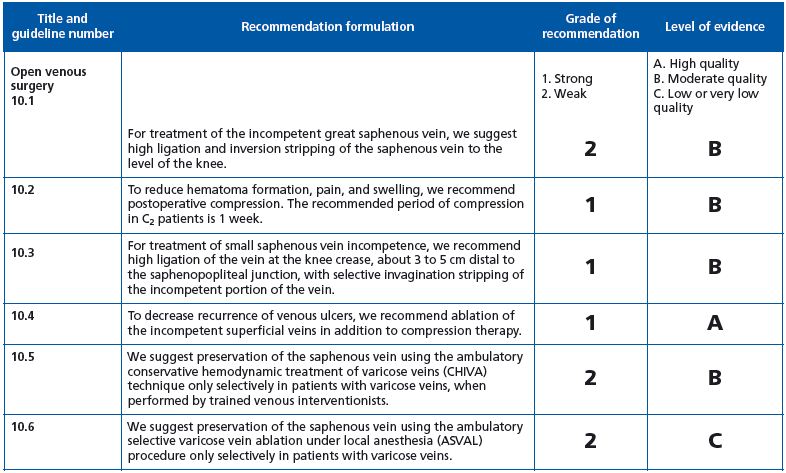 Guideline 10.1: The grade 2B recommendation seems harsh for classic GSV surgery for two reasons; firstly, because long-term RCTs comparing open surgery with thermal ablation are not available, and secondly, because open surgery performed under local tumescent anesthesia and using atraumatic techniques is less invasive than traditional procedures.
Guideline 10.2: grade 1B recommendation. Full agreement.
Guideline 10.3: grade 1B recommendation. What is the rationale for recommending nonflush ligation of the saphenopopliteal junction? As far as we know, there is no RCT comparing flush and nonflush ligation.
Guideline 10.4: grade 1A recommendation. See the comment on classic surgery in guideline 10.1.
Guideline 10.5 to 10-8: Full agreement.
Guideline 10.9 deals with VV recurrence after open surgery termed REVAS,5 but not PREVAIT, as defined in the VEIN-TERM consensus article.6 We agree with the grade 1C recommendation as there are very few RCTs comparing the various operative treatments in this situation. Nevertheless, in practice, ultrasound-guided foam sclerotherapy is the first-line treatment used, except perhaps in the presence of a large refluxing saphenous stump (figures 2a, 2b). 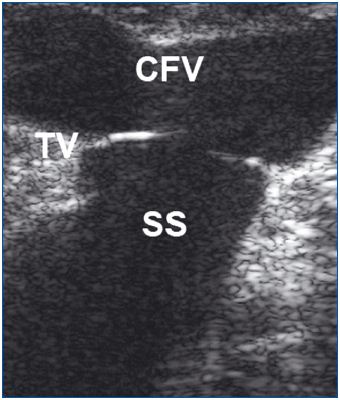 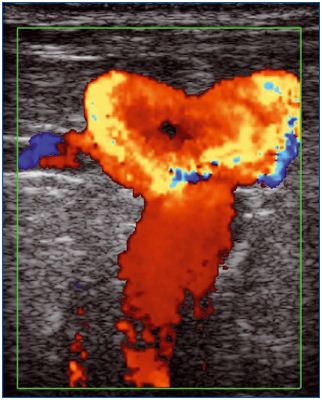 Comments
Guideline 11.1: grade 1B recommendation. Full agreement. It is worth noting that, for the authors, endothermal ablation has now become the gold standard for treating saphenous incompetence operatively, instead of HL+ stripping.
Guideline 11.2. See the comment on classic surgery in guideline 10.1
Guideline 12

The Clinical Practice Guidelines of The Society for Vascular Surgery and The American Venous Forum, published in the 2011 Journal of Vascular Surgery supplement, gathers information that had never been analyzed in depth before, and the authors deserve to be congratulated for their outstanding work.

The recommendations stated in this document should be commented by members of the international phlebology community according to their specialization, ie, angiology, surgery, dermatology, internal medicine, and phlebology, as well as in light of the health regulations in their respective countries.

Nevertheless, knowing how fast interventional procedures evolve with the development of new techniques or devices, one can bet that some of these recommendations will quickly become outdated.

The main problem with varicose veins can be summarized as follows: on the one hand, chronic venous disease—including varicose veins—evolves slowly and long-term follow-up is required to assess its outcome and management, and on the other hand, investigation and operative procedures change very fast. In other words, by the time RCT results become available, the procedures they compare have become obsolete.