Role of anticoagulation treatment in the prevention of post-thrombotic syndrome

Post-thrombotic syndrome (PTS) develops after deep vein thrombosis (DVT) of the lower limbs and may affect up to 50% of patients after proximal DVT. Prevention is of paramount importance as there is no gold standard for treatment of established PTS. Pharmacological or mechanical thromboprophylaxis is recommended to prevent PTS. Effective DVT treatment with vitamin K antagonists (VKAs), direct oral anticoagulants (DOACs), low-molecular-weight heparins (LMWHs), and fondaparinux are recommended as appropriate duration and intensity of anticoagulation therapy prevents DVT recurrence and PTS development. Rivaroxaban offers more favorable prognosis in terms of PTS development and severity than treatment with VKAs. LMWH have anti-inflammatory properties and may be superior to VKAs. Larger randomized controlled studies are needed to clarify optimal treatment for PTS prevention.

Post-thrombotic syndrome (PTS) is a frequent complication of deep vein thrombosis (DVT) of the lower limbs.1 PTS refers to chronic clinical manifestations of venous valvular dysfunction following proximal DVT, including various symptoms affecting a patient’s quality of life (QOL).2 It is also associated with a reduced ability to work, with considerable consequences for both the patient and heath care systems.3 Almost half of the patients with DVT (20%-50%) will develop PTS within 2 years after the index event, despite conventional anticoagulation therapy.4 Others reported that the incidence of PTS continues to increase up to 10 years after the initial diagnosis of DVT.5,6

No standard criteria exist for diagnosis of PTS and thus its presence becomes evident when signs and symptoms of deep venous incompetence occurs after the acute episode of DVT has passed (after 6 months).10 The signs and symptoms of PTS include limb edema, various degrees of pain, heaviness, cramps, fatigue, itching, venous claudication, varicose veins due to venous stasis, and skin changes.11 Skin changes include hyperpigmentation, venous eczema, lipodermatosclerosis, and in more severe forms of PTS, venous ulceration (Figures 1, 2). Symptoms are provoked by standing position or walking and reduced by rest and elevation of the leg. 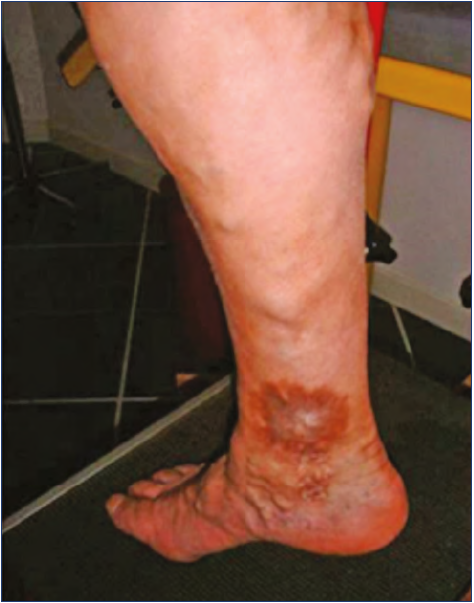 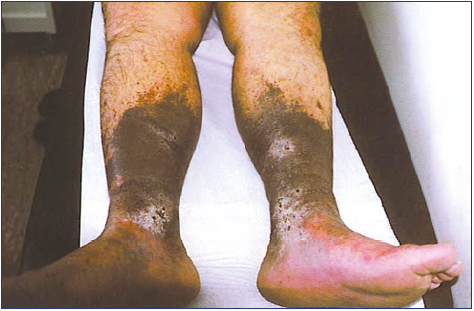 Pharmacological or mechanical thromboprophylaxis is recommended to prevent PTS.12 Appropriate duration and intensity of anticoagulation therapy prevents recurrent DVT and development of PTS.13 Vitamin K antagonists (VKAs), direct oral anticoagulants (DOACs), low-molecular-weight heparins (LMWHs), and fondaparinux are recommended for treatment of DVT.14 The latest PTS guidelines from the American Heart Association do not recommend a specific anticoagulant over another, although the quality and type of anticoagulation could affect the risk of PTS.15 This review focuses on the role of conventional anticoagulation treatment in the prevention of PTS.

For more than half a century, VKAs have been recommended as the standard treatment for DVT.13 VKAs, such as warfarin, acenocoumarol, and phenprocoumon, are administered orally and inhibit the γ-carboxylation of coagulation factors II, VII, IX, and X, and also the functional activity of the coagulation inhibitor proteins C and S.

Numerous studies have documented that the quality of VKA treatment plays an important role in PTS development.16,17 The Einstein DVT trial, a randomized controlled study (RCT) that compared the efficacy and safety of rivaroxaban with subcutaneous enoxaparin followed by a VKA in 3449 patients with acute DVT, demonstrated that 21% of patients treated with VKA were below the therapeutic international normalized ratio (INR) levels.18 A large Danish survey including 310 300 patients being treated with VKA reported that around 70% of patients were in therapeutic range, whereas another study from the United States (US) showed that only 54% of the patients had achieved continuing target levels of INR.19,20 A meta-analysis by Erkens et al21 reported that patients treated with VKAs are at the target level of anticoagulation (INR 2-3) for only about 50% of their treatment time, with a strong tendency toward subtherapeutic INR (42% in 0-1 month of treatment, 35% in 1-3 months, and 24.1% in 1-6 months).

Subtherapeutic anticoagulation with VKAs has been related to a 3-fold higher risk of PTS in patients who had an INR less than 2.0 for more than 50% of the treatment duration.16,17 About 30% of the patients, especially in the first weeks of treatment have subtherapeutic INR.16,17,21 In this period, delayed clot lysis and stimulated connective tissue growth due to thrombin generation may cause permanent fibrosis and venous damage.22 Therefore, it is crucial that patients treated with VKAs have adequate INR control during the first weeks of therapy for prevention of PTS.

DOACs have become over the last years the new standard of treatment for venous thromboembolism (VTE).14 DOACs can be given in fixed doses without routine monitoring. The following DOACs are licensed for VTE treatment: dabigatran, which inhibits thrombin, and rivaroxaban, edoxaban, and apixaban, which inhibits factor Xa (FXa). The latest guidelines by the European Society for Vascular Surgery (ESVS) recommend DOACs over VKAs for the treatment of VTE (grade 1A) in patients without cancer.14 Theoretically, DOACs may also reduce the incidence of PTS compared with VKA, due to their more reliable dosing and predictable pharmacodynamics. It remains unknown whether DOACs are equivalent to LMWH with respect to PTS prevention.

In a post hoc subgroup analysis of patients who participated in the RE-COVER studies, the long-term prevalence of PTS (mean time from the index event, 8.7 ± 1.4 years) was investigated.31 The RE-COVER studies randomized 5109 patients with DVT and/or pulmonary embolism (PE) to receive 6 months of treatment with either dabigatran (150 mg twice a day) or warfarin in double-blind design.32,33 After the completion of the studies, patient-reported Villalta and health-related QOL (HRQOL) questionnaires were sent by mail to the patients who agreed to participate. In total, 349 patients were included, of which 166 (48%) were treated with dabigatran and 183 (52%) with warfarin. PTS was diagnosed in 63% of patients with DVT and in 46% of patients with PE only and did not differ between the treatment groups; the crude odds ratio for PTS in patients treated with dabigatran compared with warfarin was 1.1 (95% CI, 0.6 to 1.8) after DVT and 1.2 (95% CI, 0.5 to 2.6) after PE only. It is possible that the higher quality of warfarin anticoagulation achieved in clinical trials than in clinical practice can partially explain why PTS prevalence did not differ between groups in the RE-COVER and Einstein DVT post hoc subgroup analyses.

LMWHs are polysulfated glycosaminoglycans derived from unfractionated heparin by enzymatic or chemical depolymerization. The molecular weight is on average 4-5 kDa (range 2-9 kDa) and inhibits FXa over thrombin.35,36 LMWHs have anticoagulant and anti-inflammatory properties.37-39 Experimental studies have shown that LMWHs reduce venous wall inflammation,37 enhance endothelization,38 and reduce fibrosis,39 and it is probable that these anti-inflammatory properties could have a role in preventing PTS.

A systematic review by Hull and colleagues40 compared long-term LMWH (≥3 months) with VKAs for DVT treatment and showed a more favorable recanalization rate and lower incidence of venous ulceration with LMWHs. Another study that compared tinzaparin with VKAs showed a 23% reduction in signs and symptoms of PTS at 3 months with tinzaparin.41 In a subgroup analysis of 480 patients included in the home-LITE study, the prevalence of PTS was lower in the tinzaparin-treated patients than in warfarin-treated patients regardless of DVT location (iliac/noniliac).42 Patients with iliac DVT had an overall odds ratio of 0.53 (95% CI, 0.33 to 0.83; P=0.0079) for PTS, and patients with noniliac DVT had an odds ratio of 0.79 (95% CI, 0.67 to 0.93; P=0.0046), both in favor of tinzaparin. The study concluded that LMWH may be a suitable alternative for the prevention of PTS in patients with iliac DVT who are unlikely to undergo invasive thrombolysis.42

Anticoagulation remains the fundamental therapy for VTE, and in terms of PTS prevention, the quality of anticoagulation is particularly important. Rivaroxaban offers a more favorable prognosis in terms of PTS development and severity than treatment with VKAs. Careful INR monitoring remains critical for the outcome in case of VKA treatment. LMWH have anti-inflammatory properties in addition to anticoagulation and may provide a more favorable outcome. In future, more research is needed with large RCTs to better define the role of different DOACs compared with warfarin as well as LMWH and fondaparinux in the prevention of PTS.