Shave therapy for venous ulcers – a review and current results

Shave therapy was established by Schmeller, mostly in Europe, and is not common in the international literature. The technique involves layered tangential and only suprafascial necrosectomy and fibrosectomy of nonhealing venous leg ulcers, combined with simultaneous skin grafting. In spite of very good long-term results confirmed by several investigators and published as a retrospective analysis, there are no prospective and randomized studies. Long-term healing rates between 70% and 80% for recalcitrant venous leg ulcers are very good, and no other current method is able to achieve comparable results. Further advantages are a simple technique, short intervention, and safety, with few complications. On account of the low risks, shave therapy is especially suitable for older patients with nonhealing leg ulcers. But one reason for the good results is a standardized postinterventional treatment regimen, including lifelong compression therapy (stockings), patient training and information on how to manage their disease, regular follow-up of wound healing, and inclusion of ambulatory care services.

A large number of treatment options for venous leg ulcers have emerged over the years, and no other specific disease is characterized by a larger polypragmasy. Nonetheless, most ulcers will be healed by conservative methods, especially compression therapy. However, it is estimated that approximately 25% of all lesions have to be characterized as nonhealing. According to the results of the Bonn Vein Study (2004), the current epidemiological study of venous diseases in Germany, 0.1% (100 000 patients) suffer from acute venous ulcers (C6 according to CEAP classification).This gives a figure of about 25 000 patients with nonhealing leg ulcers. The German Society of Phlebology guidelines define nonhealing or recalcitrant as no tendency to heal with conservative treatments after 3 months or no healing after one year (Figure 1). 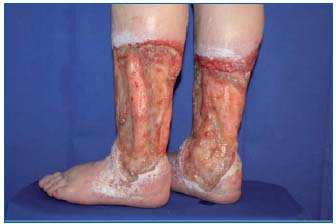 Surgical procedures should be considered for patients with nonhealing ulcers. Conservative treatment alone seems to be insufficient and unsuccessful. The following options are available:
• venous surgery or endovenous procedures
• operative techniques involving the fascia cruris (paratibial fasciotomy and fasciectomy) and
• local ulcer surgery (shave therapy, Homan excision)
Shave therapy, which is described below, has come to play a major role, particularly in some European countries (Germany, Austria, Switzerland, France).

As early as 1956, Hynes recognized that an adequate capillary plexus of the wound bed was necessary for successful free skin grafting. He was the first to apply shave therapy in the context of plastic surgical interventions, often in cases of chronic radiation dermatitis.1 Quaba, also a plastic surgeon, was the first to employ “layered shaving” in cases of recalcitrant leg ulcers and, in 1987, he reported the successful treatment of 32 patients (58 ulcers). He recognized early on that the presence of granulation tissue was insufficient for a transplant and that shave therapy allowed the formation of a fresh wound with good conditons for graft healing. The results were independent of the clinical extent of the lesions and the bacteriological status.2

The German dermatologist and phlebologist Schmeller adopted and applied these findings and practical experiences, and established the procedure through various scientific publications, especially in the years from 1994 to1999. But shave therapy is not well known in international phlebology and is not established in the world as a good choice or standard in the treatment of recalcitrant venous leg ulcers.3 Reasons are a lack of international studies, publications, and papers at international meetings.There is a great need to compare studies under same conditions (etiology,ulcer size and duration, long-term results, quality of life).

The origin of the chronic venous insufficiency is crucial for the long-term prognosis after operative procedures. If the ulcers are caused by primary superficial incompetence without deep venous involvement, they usually have long-term healing potential after removal of the insufficient venous segments by surgery or endovenous procedure. In very large ulcers, whose spontaneous healing is uncertain, simultaneous shave therapy with mesh graft shortens the healing process. If a leg ulcer is caused by deep venous insufficiency, the prognosis is poorer. In such cases, an earlier recurrence of the ulcer is to be expected. The worst long-term prognosis is seen in ulcers based on postthrombotic syndrome. Special types, such as capillaritis alba, mixed ulcers, and ulcers based on vasculitis also present a large therapeutic problem.

Using a hand dermatome (Quaba, Schmeller, Bechara) or a skin graft machine (Hermanns), layered tangential and exclusively suprafascial necrosectomy and fibrosectomy of the ulcerations are performed until rich capillary bleeding is seen at the base of the wound.1,3,4 It is recommended to use an electro-dermatome (Aesculap® Accu Dermatome) or a dermatome with drive shaft, which allows an even more exact shave and a more comfortable procedure. A layer thickness of between 0.3 and 0.4 mm is recommended, in order to avoid reaching the deep tissue layers too quickly which could incur the risk of structural injury (capsule ligaments of the joints, Achilles tendon). The skin graft is usually taken from the affected leg. Here also, a thickness of 0.3 to 0.4 mm is favorable. The ratio of mesh should be around 1:1.5, if enough skin is available. A thicker mesh skin leads to poorer healing rates, a larger mesh ratio reduces the ability to bear everyday strain (Figures 2, 3, 4). 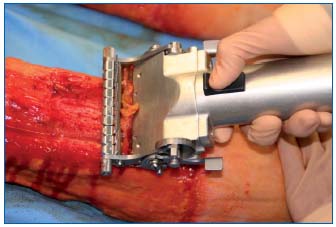 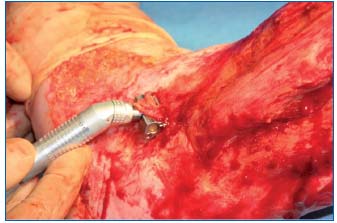 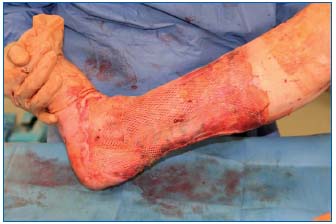 CURRENT RESULTS FROM THE KREFELD VENOUS AND WOUND CARE CENTER

Patients and Methods
The data reported below are from a retrospective analysis of the results of 451 shave treatments, performed on 363 affected legs (278 patients), between 1.1.1998 and 3.31.2007, at the Krefeld Venous and Wound Care Center.

Before surgery, a complete work-up was done for all patients, including noninvasive examination of the venous and arterial vascular system, especially using duplex sonography as an imaging procedure. Invasive procedures, such as ascending phlebography, angiography, and magnetic resonance imaging, are available for investigating specific questions. The measurement of compartment pressure as well as morphologic examination of the calf using magnetic resonance imaging, enhances the diagnostic repertoire. The clinical course of therapeutic resistance is vital for the indication for operative intervention. Collection of 88 data points per patient was carried out using a special documentary sheet, which included:
• vascular status
• local ulcer documentation
• specific medical history
• comorbidities
• treatment performed
• discharge report
• questioning of patient regarding pain and general well-being during hospitalization

Based on the visual analog scale, the level of pain and general well-being was noted before the operation and at the time of the first change of bandage on the fourth postoperative day. All ulcers were measured and photodocumented before the operation (planimetry). Follow-up examinations were at 2, 4, and 16 weeks, and annually thereafter at a fixed time. Photodocumentation was always performed.

Results
At the time of follow-up in March 2007:
• 289 legs had completely healed (79.6%)
• 30 legs (8.2%) had residual lesions whose surface area on discharge from hospital was less than 10% of the initial ulcer surface area. These lesions continued to show a good tendency to heal
• 44 legs (12.2%) had to be categorized as failure

Results and etiology
If the etiology of the ulcers is included in the analysis of the results, 17 legs (4.8%) had recalcitrant leg ulcers caused by primary venous insufficiency. Removal of insufficient venous segments by crossectomy and stripping with simultaneous shave therapy was carried out in these cases. All ulcers of this group had healed at the time of last follow-up. 346 legs (95.2%) had pathological changes in the deep venous system in the sense of a postthrombotic syndrome or deep venous insufficiency of other origin. At the end, most of the recurrences were seen in this patient group.

Shave therapy and pain
The intensity of pain caused by the ulcer was evaluated preoperatively with an average score of 6.8 on a scale of 0 to 10 points. Postoperatively, at the first change of dressing, nearly all patients reported no pain (0.8 points). Pain reduction is an important factor in the physiological and psychological healing process. 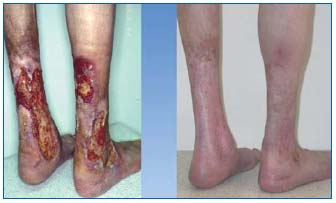 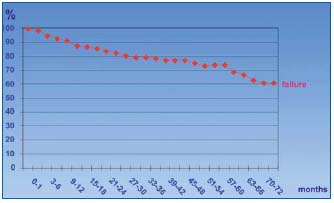 Complications
Generally shave therapy is a very safe procedure and complications are rare.

In the case of a patient with long-term drug addiction, fulminant necrotizing fasciitis was seen in the third postoperative week. This led to the patient’s death in the context of recurring deep vein thrombosis with pulmonary embolism. But this complication is not to be interpreted as specific to the intervention.

Shave therapy and the older patient
76% of the patients were older than 60 years at the time of operation, and 21% were aged between 80 and 99. A total of 11 patients older than 90 survived the intervention without complications. The results in the older patients at follow-up were as good as in the younger group (ulcer healing rate 80%). Even the patients who died had a high healing rate (84.5%) until their death. Pain and wound care were clearly reduced. On account of the low risks, shave therapy is suitable for older patients with nonhealing leg ulcers (Figure 7). 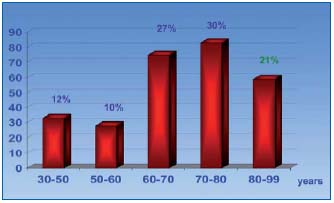 Long-term results after shave therapy are very good, with a complete healing rate of 79.6%. In Germany, shave therapy is the first-choice operative treatment in recalcitrant venous leg ulcers. Schmeller, Popescu, Obermayer, and other authors have achieved comparable healing rates (70%-80%) after surgery.3-6

Local and general postoperative side effects are rare, as is injury of deep tissue structures (eg, Achilles tendon with widespread dermatolipofasciosclerosis). The use of skin graft machines guarantees a short operative procedure, which, depending on the size of the lesions, usually lasts less than 30 minutes.

The technique is simple and easy to learn. Compared with crural fasciectomy, trauma is noticeably reduced through the exclusive suprafascial procedure. As a result, hospitalization is shorter (mean of 34 days for all patients) than for patients following crural fasciectomy, for which hospital stays of 50 days have been reported.

Our investigations relating to the pain experienced in cases of venous leg ulcers were surprising. With 6.8 on the 10-point visual analog scale, patients suffer more than we generally assumed. Extensive necrosectomy rapidly reduces pain. Despite the new and sometimes large wound surfaces, patients are generally free of symptoms from the first postoperative day. On average, leg ulcers had been present for 16.4 years before operation. After creation of a fresh wound, skin-graft healing can ensue, even after a latency period of up to 40 years.

Good long-term results can only be assured by standardized accompanying treatment. Compression therapy—if possible with a compression stocking— should be lifelong. Avoidance of edema through application of intermittent compression therapy at home is an important point of the treatment concept. Patient training and information on how to deal with the disease and on the care of skin and transplants motivates patients and results in a high level of compliance.

In the early stages of hospitalization, patients get practice by the attending physicians on how to change their dressings daily, how to apply their bandages and take care for their skin. They also learn to wear their compression stockings correctly. In order to guarantee long-term success, it is also important to involve and educate ambulatory care services, especially for the care of elderly patients. These healthcare services are requested to take part in a joint visitation and discussion prior to the discharge of the patient.

Shave therapy—standard of care?
It is quite difficult to recommend shave therapy as a standard technique for healing recalcitrant leg ulcers, because it is only established in certain parts of Europe. So far there is an obvious lack of international recognition and experience. Evidence-based state-of-theart treatment today is characterized by wound preparation through an effective granulation tissue supported by vacuum-assisted closure therapy and autologous skin grafting as a second step.7 Ulcer shaving on the other hand removes necrotic tissue, fibrosis and granulation tissue and creates fresh wound leading to conditions of primary wound healing. Simultaneous skin grafting (mesh graft) is indispensable. Further studies are needed to confirm the importance of shave therapy in the treatment of venous leg ulcers. It is simple and the operation is generally short and safe. Mostly in Europe shave therapy, as a “local ulcer surgery” is increasingly the first-choice method in the treatment of nonhealing venous leg ulcers.