Download this issue Back to summary
LASER PHLEBECTOMY AND RELATED TECHNIQUES

Chairpersons: A. A. RAMELET (Switzerland), R. A. WEISS (USA)

Since the year 2000 the author has used the therapeutic two-step combination of:
1) phlebectomy of varicose tributaries with flush ligation at the entry of the upper incompetent tributary with saphenous stem, followed by
2) duplex-guided foam sclerotherapy of the residual saphenous stem after 2 months, in patients with saphenous incompetence without saphenofemoral or sapehopopliteal junction reflux.
The sclerosant foam is formed using the Tessari method.
One to 2 months after phlebectomy no residual varicose veins are detected, and duplex imaging of the residual saphenous stem shows abolition of, or remarkable decrease in, reflux and nearly 30% reduction in diameter. No major complications have been noted. Short-and mid-term clinical and duplex follow-up are comparable with the authors’ own results of foam sclerotherapy or the reported results of single phebectomy. Terminal valve competence and small calibers are the main predictive factors for a positive mid-term outcome.

In conclusion, phlebectomy, according to Muller, has reached perfect maturity. It is a simple, elegant, and economical technique. It is easy to perform in trained hands.

1320 nm endovenous laser with a 280 μ fiber:
equivalent to phlebectomy?

A pilot study was performed in which nine patients with primary branches originating from incompetent greater saphenous veins were treated with a two-step approach: endovenous ablation of the incompetent greater saphenous vein (radiofrequency or laser) followed immediately by treatment of primary truncal branches with laser instead of phlebectomy. Tumescent local anaesthesia was accomplished. Due to tortuosity of the vessels, several punctures were sometimes needed to treat a segment. Direct visual confirmation of coagulation with shrinkage of vessel and lumen obliteration was done by duplex scanning. Immediate followup (day 1 and 7) revealed no pain and no hematoma, with a fibrotic cord along the path of the treated vein. No pigmentation typical of sclerotherapy was visualized. Rupture of smaller veins does not occur with this type of laser (water heating causes thermal wall damage instead of blood absorption)
More patients are needed to confirm these preliminary findings.

Liposuction is a safe and very common procedure. The major complication is due to embolism caused by vascular injuries. Subfascial located veins such as the short saphenous vein are not at risk. The anterior saphenous vein and Giacomini veins are at risk because they are very weak and have horizontal tributaries with the great saphenous vein. Perforator veins are linked like strings between two fixed points and are thus also at risk. There is no damage to the reticular network.
To avoid vascular injuries, preoperative mapping of important veins in the liposuction region is helpful.
A modification of coagulation in cases of trombophilia is always a specific risk increased by the crush syndrome of vascular and capillary injuries. Thus, thrombosis prophylaxis in patients with a high risk profile is mandatory. Recent venous and lower-limb surgery is a contraindication for liposuction.
The liposuction volume has to be kept below 3 liters. Operation time should not be longer than 2.5 hours. Appropriate compression therapy (lipopanty) avoids postoperative stasis.

The author presented a study of 3675 patients with 5471 consecutive venous procedures (great saphenous vein 46.2%, short saphenous vein 10.1%, inguinal or popliteal reoperation for recurrences 9.1%, atypical operations related to anatomy 30.6%) in a standard routine way to prevent DVT.
Characteristics of this routine procedure:
– preoperative skin mapping
– truncal nerve anaesthesia
– soft surgery: exclusively invagination stripping, ablation of tributaries through microincisions
– immediate 40 mm Hg elastic hosiery compression
– walking 2 to 3 hours after operation
– perioperative anticoagulation related to the medical background
All patients were clinically reviewed on day 6 to 8 and day 30. A duplex scan was performed in case of the slightest suspicion of DVT and not systematically in all patients. A thrombosis occurred in 14 patients (0.26%) with one minor pulmonary embolism. In comparison with other studies, this operative routine could be helpful in preventing DVT.

The aim of this study was to find a reasonable maximum safe dose of lidocaine for tumescent local anesthesia in phlebectomy, based on our knowledge about tumescent local anesthesia in liposuctions.
Women having liposuction of the hips and thighs volunteered to participate in a 3-part study of lidocaine absorption kinetics. The author assumed a linear relationship between dosage and peak serum concentrations and concluded that an optimal dose was 40 mg/kg.
Infiltration technique with Monty needles (16 to 20 G) was proposed, in combination with the HK infiltration pump (HK Surgical). Open drainage might reduce postoperative swelling, pain, and ecchymosis.

A novel application of tumescent anesthesia for saphenous
vein stripping

In more than 100 cases of greater saphenous vein stripping and 15 lesser saphenous vein stripping, a new application of tumescent anesthesia was used. After local anesthesia in the groin or popliteal fossa, the stripper is brought into the vein and a tiny plastic tube is attached to the stripping bulb. Anestheticum is infused while stripping and is continued in the saphenous path after stripping.
The objectives of this study were: prolonged analgesic effect, irrigation of the stripping pathway of blood and debris, decrease in postoperative bleeding and decrease in postoperative pain.
The authors concluded that there is:
– minimal blood loss (15-35 mL)
– no epinephric side effects
– prolonged pain relief
– improved ambulation the day of surgery
– decreased bruising, and swelling.

The combination of anti-inflammatory drugs and tumescent anesthesia has improved the postoperative recovery of patients with saphenous vein stripping.

There is a tendency towards new techniques. A modern venous procedure should be safe (no ascending thrombus), effective (no symptoms of recurrence), extensive (all varices), tolerable (no pain), rapid (short intervention time), cosmetic, cheap (instruments, material), and stable (no recurrence). A personal experience with 30 cases was described. Transillumination-guided endovenous laser treatment was combined with transillumination-guided interruption of the junctions (minimal inguinal incision, average 10.2 mm), phlebectomy, and perforator ligation when necessary.
Complications were mentioned (residual varices 8.3%) and also the results of duplex scanning at 30 days. The technique, compared with other methods, seems to represent a safe, stable, quick, effective, well tolerated, cheap, and recommendable procedure.

The Closure Treatment Registry follows the outcome of limbs treated wih controlled-temperature endovenous radiofrequency ablation of the saphenous vein at annual intervals to assess the hemodynamic status of any residual vein stumps and the clinical status of the affected limbs.
In this study 318 limbs (criteria: reflux of saphenous vein, vein diameter 2-12 mm, no abnormal tortuosity or aneurysm formation) were treated with radiofrequency ablation without adjunctive high ligation and in combination with other procedures such as phlebectomy, sclerotherapy, and ligation of perforants.

Complications of the therapy were mentioned:
– paraesthesia: 1.4% (observed less frequently when ablation was limited to saphenous vein segments above the calf)
– burns at one week: 4.2%
– DVT: 1%
– clinical phlebitis.

Absence of reflux was observed in 88% of limbs at 2 and 3 years. No evidence of neovascularization was seen. The proportion of limb pain, fatigue, and edema was low and comparable to the results of classical vein stripping. There was high patient satisfaction.
The clinical and hemodynamic outcomes of endovenous radiofrequency ablation after 3 to 4 years are encouraging and appear to be comparable to vein stripping.

Various aspects of the surgical treatment of venous and lymphatic disease were discussed during this session.
Z.G. Wang presented 14 patients investigated and treated for the Nutcracker syndrome. Reimplantation of the superior mesenteric artery below the left renal vein and transluminal angioplasty with stent deployment of the left renal vein was performed in six cases. Good clinical results were obtained. Hematuria and proteinuria after strenuous physical exercise disappeared.
L. Corcos reported various reconstructive interventions on the deep venous system in 60 patients with CVI (CEAP 3-5). He used intersection (32 cases), reconstruction by valvular transplantations (28 cases), and intravenous valvuloplasty (8 cases). Seven new reconstructive operations were performed. Damaged valves were recreated from the autologous intimal flap. All patients received class II elastic compression and 60 days of drug therapy with heparin, warfarin, and defibrotide. New reconstructive techniques led to 100% clinical improvement, 85.7% hemodynamic improvement, and 100% stable ulcer healing. The mean follow-up time was 4 years and 5 months. The author concluded that valvular repair of deep veins represents a realistic possibility.
B. B. Lee presented his experience of treating arteriovenous malformations (AVM) and chronic lymphedema. He used sclerotherapy with absolute ethanol (99 cases of AVM), embolosclerotherapy with subsequent surgical excision (16 cases of extratruncular forms AVM), and a surgical intervention in nine patients with truncular forms of AVM. Complex decongestive physiotherapy and/or sequential intermittent pneumatic compression were used for treatment of chronic lymphedema.
Progression of the disease in spite of intensive treatment was an indication for surgical intervention. Such procedures as venolymphatic anastomoses, free lymph node transplantation, and resection operation were the available option.
M. Perrin has presented 72 patients (76 limbs) with isolated primary short saphenous vein (SSV) insufficiency. All these patients were treated between September 1997 and May 1978 in two skilled vascular units. Patients were grouped according to the CEAP classification and assessed postoperatively at 1 and 6 months, and later every year. Non-postoperative complications were identified in a mean follow-up period of 48 months (12 to 60 months). One recurrence in the popliteal fossa was found and treated with redo surgery 9 months after initial operation. All patients showed decreased signs of CVI (Table I). 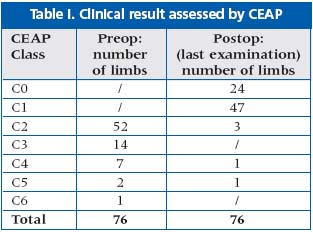 M. Perrin concluded that surgical treatment of the SSV performed in specialized units gives excellent long-term results.
T. Yamaki presented an original technique of angioscopic greater saphenous vein (GSV) valvuloplasty combined with axial transposition of a competent tributary vein. This operation was performed in 59 patients with GSV incompetence. The author assessed the results of intervention with APG. Perfect results were achieved in most cases during the 36 months of follow-up.

M. Malouf described the principal causes and signs of pelvic venous congestion syndrome and presented various methods for abolition of the ovarian vein reflux. These included the now almost obsolete retroperitoneal ligation and excision or laparoscopic ligation the more popular endovenous obliteration with coils and other occlusive materials, and also endovenous obliteration in combination with sclerotherapy.

This live satellite transmission from surgery suites included various methods for treating varicose veins and telangiectatic leg veins. The techniques were performed by A. Fronek, R. A. Weiss, and M. P. Goldman. Several key points were addressed. For the reticular and telangiectatic leg veins they proposed the use of a pharmaceutical solution prepared with glycerin plus epinephrine and lydocaine; this sclerosing agent has good viscosity for distribution inside the telangiectasia. They also propose the use of 1064 nm laser in the treatment of reticular veins between 0.3 and 0.7 mm.
In sclerosing treatment for saphenous collaterals, they propose the use of Sotradecol (STD) foams in 1% to 2% concentrations. In these cases they always perform echoguided injections in order to avoid extravasations.
In the treatment of great or lesser saphenous veins trunks with sclerotherapy, they propose increasing the concentrations of STD to 3%. All these injections must be performed under duplex guidance for the control of the filling of the vein up to the junction with the deep system. In order to avoid deep vein complications, several manouvers such as probe compression at the junction, extremity elevation, and leg muscular contractions after the injection are recommended.
With this protocol up to 30% of cases need to be reinjected, as Dr. Weiss pointed out.
Several cases were treated with the use of venous closure devices (1320 EVLT, 810 EVLT, VNUS Radio frequency Closure). Prior to applying any of these methods of treatment, duplex mapping of the saphenous anatomy is the single most important step, as was pointed by Dr Min. During the procedure, in order to avoid vasoconstriction of the saphenous veins, a warm temperature at the level of the venous access is mandatory.
The experts have recommended vein cannulation with the devices previous to the injection of the tumescent anesthesia. The echo image artefacts that the anesthetic liquid creates can induce problems with the correct positioning of the device at the saphenofemoral junction.
Prof J. J. Bergan has pointed out that with these techniques the classical surgical approach to the saphenofemoral junction in varicose veins disease is only necessary in cases with venous aneurysm exceeding 2 cm in diameter at the level of the preterminal valve in the junction.
Due to the high collagen properties of the venous tissue obtained after a phlebectomy, Dr Goldman proposes its use for esthetic treatment of facial wrinkles.