For the first time ever, the organization of the world congress of the Union Internationale de Phlebology (UIP) in conjunction with the American College of Phlebology took place in the USA: San Diego, California, from August 27th to August 31st, 2003. This congress is the major event in this medical field and demonstrates the evolving approach of American specialists to venous disease.
Chronic venous insufficiency* (CVI), at onset, classically presents with the symptoms of leg heaviness, pain, cramps, itchiness, sensation of swelling, and the sign of edema. A recent Polish epidemiological survey put the prevalence of these symptoms at 80% to 90% and signs, such as edema, at about 70% in CVI patients.1 These symptoms are known to be due to venous hypertension caused by venous abnormalities (functional or structural) and can exist at any stage of the disease. However, new data acknowledged in San Diego has also linked these symptoms and signs to the inflammatory cascade following initial leukocyte adhesion to the endothelium of the vein wall in early CVI.
A number of drugs are put forward as effective treatment for the symptoms and signs of CVI. However, over the past few years international experts have reviewed the evidence for the use of such drugs and produced guidelines for the treatment of CVI. In 1996, initial guidelines from American physicians gave little scope to pharmacological treatment, whereas, by 2001, in the second edition of guidelines by American experts and also in San Diego, an entire chapter was devoted to pharmacological treatment, and within that, a major role assigned to the treatment by daflon 500 mg.
They recognized that, of all the phlebotropic drugs, daflon 500 mg, or micronized purified flavonoid fraction (MPFF), consisting of 90% micronized diosmin and 10 % flavonoids expressed as hesperidin, is the only phlebotropic drug effective at any stage of CVI. This efficacy is due to its comprehensive mode of action which acts at the heart of the disease, namely the inhibition of leukocyte adhesion. Coupled with this mode of action daflon 500 mg is unique in that it is micronized. The process of micronization has been demonstrated through several clinical studies to accelerate daflon 500 mg’s onset of action and to improve its efficacy in reducing inflammation and treating clinical symptoms and signs (such as edema).
Indeed, this clinical efficacy has recently been given recognition by the guidelines of the American Venous Forum in the treatment of CVI, and has been one of the highlights of the UIP congress.

* In this paper, CVI includes symptoms
usually attributable to the disease and
signs (C1 to C6) described in the clinical
CEAP classification.

A unique mode of action at the very heart of the
disease reported at the UIP international congress,
San Diego

The pathophysiology of CVI and its complications are welldocumented. In fact, from the initial symptoms and signs of leg heaviness, cramps, pain, swelling, and edema, to the most severe stage of CVI, venous leg ulcers, the cause remains the same throughout. For a long while now researchers have known that, at the level of the microcirculation, the leukocyte-endothelial interaction is an integral step in the development of venous leg ulcers. However, at the recent International Congress of the “Union Internationale de Phlébologie” (UIP), San Diego, USA, Prof Nicolaides presented results showing that leukocyte adhesion to the endothelium and subsequent damage not only plays a central role in venous leg ulcer development but also occurs at the level of the venous wall in early CVI patients. Therefore, the CVI symptoms and signs (including leg edema) that patients often complain of in early disease, through to advanced disease (venous leg ulcers), can all be attributed to the inflammatory cascade that occurs as a result of leukocyte adhesion to the endothelium.
For optimal efficacy in treating the symptoms and signs at any stage of CVI and its most severe complication, venous leg ulcers, a drug has to act at the very heart of the disease (ie, the leukocyte-endothelium interaction). The only phlebotrope to have demonstrated a comprehensive action at the heart of the disease is daflon 500 mg. This evidence comes from several studies that clearly show daflon 500 mg inhibits leukocyte adhesion and subsequent activation, decreases capillary hyperpermeability, and reduces the indices of inflammation.2 Daflon 500 mg also increases venous tone and improves lymphatic drainage, thereby offering comprehensive protection of the microcirculation and treating all the other aspects of chronic venous insufficiency.
Daflon 500 mg’s clinical efficacy in venous leg ulcers has been comprehensively demonstrated by several randomized controlled studies.3,4,5 Moreover, the results from 5 individual studies have recently been analysed in collective form as the “meta-analysis of the venous leg ulcer healing in prospective randomized studies using Micronized Purified Flavonoid Fraction and presented in San Diego”for the first time by Prof P. Gloviczki6 (USA). In 723 patients with venous leg ulcers, the addition of daflon 500 mg to conventional therapy increases the number of complete healed venous leg ulcers after 6 months. This occurs with a significantly faster ulcer healing rate (P =0.003) and an larger decrease in ulcer area (P d0.01).

By acting at the heart of CVI, daflon 500 mg is effective at all stages of disease. However, flavonoids have a poor gastrointestinal absorption. This is overcome, in daflon 500 mg’s case, by the process of micronization: a high-tech process which reduces daflon 500 mg’s mean active particle size by 35 ìm with a subsequent faster and better absorption in humans with improved bioavailability. This has been conclusively demonstrated in a single-center, randomized, double-blind, crossover study in 12 healthy male volunteers. Immediately from 24 hours postingestion, daflon 500 mg’s absorption (measured by urinary radioactivity) is almost twice that of simple diosmins (P<0.0001). This improved absorption of daflon 500 mg over simple diosmins is maintained after 2 weeks of treatment (57.9% vs 32.7%; P<0.0004).7 Therefore, evidence that, thanks to micronization, daflon 500 mg’s absorption is almost doubled, leading to significantly improved clinical efficacy.
Further proof of the benefit that micronization gives daflon 500 mg comes from a study performed by Prof Bouskela and her team.8 Over a 10-day period, they looked at the influence of daflon 500 mg and simple diosmin, at 4 different doses, on capillary permeability in an inflammatory model (induced by ischemia/reperfusion) in the hamster cheek pouch. In addition, one group of hamsters was treated with vehicle (10 % lactose solution) as the control group. Capillary hyperpermeability was assessed by counting the number of leakage sites at a microscopic level in the cheek pouch after 30 minutes of local ischemia. At each concentration daflon 500 mg inhibited hypermeability significantly better than simple diosmin and in a dose-dependent fashion. Simple diosmin inhibited hyperpermeability but not in a dose-dependent fashion (Figure 1). 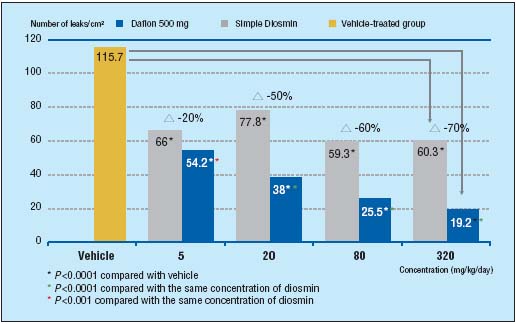 As a consequence: daflon 500 mg’s unique efficacy in
edema at any stage of the disease

Micronization therefore provides daflon 500 mg with this comprehensive mode of action and a unique efficacy in CVI at the level of the microcirculation. However, a phlebotrope must be demonstrated to be clinically effective in CVI patients for it to be of any use. Patients with CVI are seeking relief of their debilitating symptoms and signs. In fact, recent guidelines have recommended the use of phlebotropic agents in the treatment of edema and CVI symptoms at any stage of the disease and, in this regard, daflon 500 mg’s efficacy is unique.9 Indeed, daflon 500 mg is the only phlebotropic drug to have demonstrated its effectiveness in the most severe stage of the disease: leg ulcer (see page 213).
In addition, recent recognition of daflon’s efficacy in the treatment of edema and its associated symptoms has come from the world-renowned journal, Drugs.1 No less than 14 world experts in the field of phlebology reviewed the use of daflon 500 mg in CVI, venous leg ulcers, and hemorrhoidal disease. In their opinion the recommendations for daflon 500 mg’s use in CVI in symptoms and edema is supported by its extensive clinical trials: In the “Reflux assEssment and quaLity of lIfe improvEment with micronized Flavonoids (RELIEF)” study, 5052 symptomatic patients, with CVI (CEAP stages C0s to C4), underwent a 6-month study with 2-monthly assessments which included CVI symptoms and edema (leg circumference measured by leg-o-meter), and venous reflux.10 Each patient took daflon 500 mg, 2 tablets daily, and was grouped into either “with venous reflux” or “without venous reflux”. At the end of 6 months there was a significant reduction in edema in both groups from baseline (P=0.0001) (Figure 2) and symptoms (including pain) were improved also (P=0.0001).
Another study looked specifically at the reduction of edema associated with varicose veins. Over 6 weeks, patients took daflon 500 mg, 2 tablets/daily, and were assessed 2-weekly for symptoms and edema (by optoelectronic volumetry). At the end of 6 weeks treatment with daflon 500 mg, there was a significant decrease in edema by 392mL (P<0.001) (Figure 3). In addition, patient symptoms of pain, sensation of swelling, and cramps were significantly improved (P<0.001).7 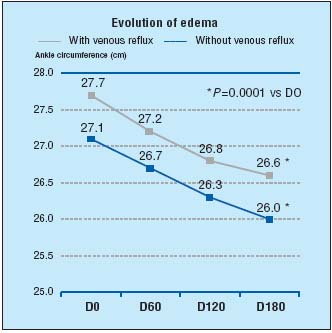 Figure 2. Evolution of edema in RELIEF study after 6 months of
daflon 500 mg treatment (adapted from ref10). 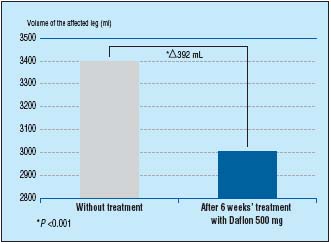 In addition, daflon 500 mg has also demonstrated an early onset and prolongation of efficacy in the reduction of edema: in a multicenter, randomized, double-blind placebo- controlled study over 8 weeks, 160 patients were randomized to either receive daflon 500 mg (2 tablets/ daily) or placebo.2 Assessment of symptoms and edema (by calf and ankle measurement) took place at inclusion, 4, and 8 weeks. From as early as 4 weeks daflon 500 mg had improved leg edema (P<0.001) and sensation of leg swelling (P<0.001). Both of these factors were further improved after 8 weeks (P<0.001) there by demonstrating daflon 500 mg’s prolonged efficacy in the reduction of leg edema (Figure 4).

Through its rigorous clinical studies daflon 500 mg is now recognized, by International Guidelines in CVI, which were confirmed by the Americans, in San Diego as the most effective phlebotropic drug. This is due to its action at the very heart of the disease, namely its unique inhibition of leukocyte adhesion, which has now been shown to be at the cause of all symptoms and signs (including edema) from the early to the most severe stages of the disease. A consequence of leukocyte adhesion is the inflammatory cascade (including capillary hyperpermeability). Daflon 500 mg’s unique micronized form has demonstrated a significantly better inhibition of capillary hyperpermeability compared to simple diosmin. Therefore, in any CVI patient complaining of symptoms and signs (including venous leg edema) from the disease onset to the most severe stage, daflon 500 mg, 2 tablets daily, is the reference treatment for immediate and sustained reduction of edema.