Purpose: to determine the frequency of pelvic varicose veins with transvaginal ultrasound and associated lower extremity venous insufficiency with Doppler ultrasound in women with chronic pelvic pain of undetermined origin.

A total of 100 women with chronic pelvic pain of undetermined origin lasting more than 6 months were included in the study. The presence of anechogenic and non-pulsatile vascular structures demonstrating flow in Doppler ultrasound with a diameter >5 mm in parauterine and paraovarian localizations was accepted as pelvic varicose veins. In all patients, lower extremity venous systems were examined with Doppler ultrasound to assess possible associated venous insufficiency. The chi-square test was used for statistical analysis.

Pelvic varicose veins were discovered with transvaginal ultrasound in 30 of 100 patients. This association was shown to be statistically significant. Various degrees of associated lower extremity venous insufficiency were also discovered in 21 of these 30 patients.

Chronic pelvic pain is a frequent disorder in women and considerably disrupts daily activities. Although dilatation of the broad ligament and the ovarian plexus veins has been identified as the cause of the pain, it is usually not taken into consideration because of the difficulty of diagnosis and treatment1,2. Pelvic venous congestion and pelvic varices have increasingly been identified as the causes of chronic pelvic pain. Although ultrasonographically a normal pelvic venous plexus appears as one or two small, smooth tubular structures that are <5 mm in diameter, pelvic varices typically appear as parauterine or paraovarian dilated and tortuous vascular segments, and anechoic structures that are >5 mm in diameter2-5. Since transvaginal ultrasonography (TVUS) is a noninvasive, inexpensive, relatively easy procedure, it has been widely accepted for use in the diagnosis of pelvic varicose veins and is the most commonly used diagnostic tool5-7. Pelvic varices are commonly associated with vulvar, perineal, and lower extremity varices2,3,8,9. To the best of our knowledge, there are no studies of the frequency with which pelvic varices are associated with lower extremity venous insufficiency.

One hundred women between the ages of 22 and 52 years (mean, 38 years) presenting between February 1 and May 1, 2004, with chronic pelvic pain of undetermined origin that continued for more than 6 months were included in the study. None of the cases had been previously diagnosed to have lower extremity venous insufficiency.

The study adhered to the principles of the World Medical Association’s Declaration of Helsinki and informed consent was obtained from every subject. An institutional ethics board had not been established during the time of the study. Each patient’s age and number of births were noted before ultrasound examination. High-resolution 6.5 MHz transvaginal and 7.5 mm linear probes, and a Shimadzu SDU-2200 were used in the ultrasound examinations. Initially, TVUS was performed. Before examination, patients emptied their urinary bladder. Examinations were performed when the subjects were in the supine position with knees in 30-45 degree flexion. Endometrial thickness was noted and, when present, uterine and ovarian abnormalities were recorded. The presence of nonpulsatile flow in dilated veins was shown by Doppler ultrasound. The presence of parauterine or paraovarian circular or linear, nonpulsatile anechoic structures that were >5 mm was accepted as pelvic varices2,7 (Figures 1 and 2).

Figure 1: a, b. Gray scale ultrasound examination (a) of the pelvic region in a 45-year-old woman reveals serpiginous structures, which are thought to be varicose veins. Color and duplex Doppler ultrasound (b) shows venous flow within these structures. 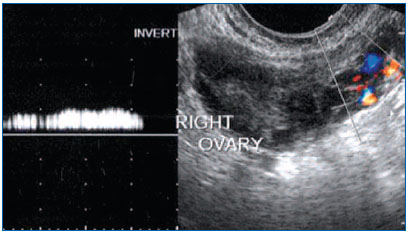 In the second phase, the lower limb venous system was examined with Doppler ultrasound. The common femoral vein (CFV), superficial femoral vein (SFV), deep femoral vein (DFV), popliteal vein (PV), long saphenous vein (LSV), and short saphenous vein (SSV) were examined on a gray scale, with patients in the supine position, according to the wall structure, intraluminal echogeneity, diameter, and compressibility. Later, color and spectral examinations of venous structures were performed. In the literature, it has been shown that there is no absolute limit for reflux duration, and the duration of reflux changes depending on the position of the patient, diameter of the lumen, and number and localization of the venous valves. Generally, a duration of 0.5-1 sec has been suggested as pathological.10 In this study, we accepted inverse flow >0.7 sec with mechanical compression and Valsalva maneuver to be pathological. In order to evaluate the association between pelvic varices and lower limb venous insufficiency and the relationship with the number of deliveries, the chi-square statistical test was used.

Table 1: Distribution of the number of patients according to pelvic congestion and venous insufficiency.

While the diameter of pelvic veins was observed to be bilaterally >5 mm in 13 patients, they were right sided in 10 and left sided in 7. In 9 of 21 patients who had concomitant venous insufficiency, dilated pelvic veins were bilateral, whereas in 7 patients they were on the left side and in 5 on the right. In 21 patients with concomitant pelvic varices and lower limb insufficiency, insufficiency was observed in the CFV of 16 patients, LSV of 7, DFV of 2, SFV of 2, PV of 3, and in the SSV of 1 patient (Figure 3). 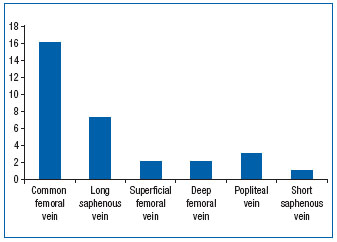 Figure 3: Distribution of lower limb venous insufficiency within the group of women with pelvic congestion.

Among 30 patients whose pelvic vein diameters were >5 mm in TVUS, 24 had normal TVUS findings, 3 had myoma foci, which, based on their size and appearance, may have been the cause of pelvic pain, and 3 had hemorrhagic ovarian cysts that were >3 cm in diameter. There was no retroverted uterus detected in this study group (Figure 4). 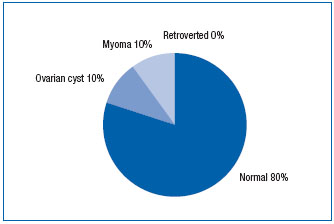 Among 70 patients whose pelvic vein diameters were <5 mm, 50 had normal TVUS findings, 7 had myoma foci, which, based on their size and appearance, may have been the cause of pelvic pain, 11 had complicated ovarian cysts that were >3 cm in diameter, and 2 patients had retroverted uteri (Figure 5). 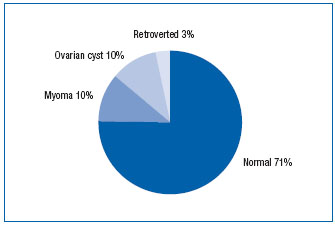 Table 2: Distribution of cases with and without pelvic varices according to the number of deliveries.

Chronic pelvic pain accounts for 10% to 40% of all presentations to obstetrics and gynecology outpatient clinics7,11,12. Pelvic pain among women is a common condition, which may have various causes. The most common causes include pelvic varicocele, endometriosis, pelvic adhesions, atypical menstrual pain, urological problems, spastic colon syndrome, and psychosomatic disorders7. Dilatation of broad ligament and ovarian plexus veins and the presence of an incompetent ovarian vein constitute a specific entity known as pelvic congestion syndrome (PCS) or pelvic varicocele1. It has been reported that pelvic varicocele occurs in 10% of the general female population and in about half of women who have chronic pelvic pain2,7. Pain secondary to pelvic congestion increases with fatigue, coitus, and conditions that increase intraabdominal pressure, such as walking, bending, heavy lifting, and prolonged sitting during the premenstrual period. Chronic pelvic pain is generally unilateral2,3,8,9. Pelvic congestion is diagnosed mostly in multiparas. During pregnancy, the ovarian vein dilates permitting a 60-fold increase in blood flow, which is considered to be one of the most important causes of venous insufficiency3,13. In our study group, which had a mean number of deliveries of 2 (range, 0-7), pelvic varices were observed in 18 (28.5%) of the 63 women who had <2 deliveries and in 12 (32.4%) who had >2 births. Statistical analysis did not reveal any significant relationship between pelvic congestion and the mean number of births.

Venous drainage of ovarian veins occurs via the ovarian plexus, which connects with the uterine plexus at the level of the broad ligament. Generally, a single ovarian vein leaves the ovarian plexus and ascends superiorly along the course of the psoas muscle and drains into the left renal vein on the left side, and into the inferior vena cava (IVC) on the right side. Sometimes more than one ovarian vein leaves the ovarian plexus and they unify before draining into the IVC or left renal vein. In autopsy series, valves in the upper portion of ovarian veins were absent on the right side in 6% and on the left side in 15% of the study population. The presence of pelvic congestion in nulliparous women is believed to be linked to the congenital absence of these valves3. Although invasive methods such as vulvar phlebography, transuterine venography, retrograde phlebography, and selective ovarian venography have been used in the diagnosis of pelvic congestion, all of these methods, except selective ovarian venography, have been abandoned. Selective ovarian venography is used only in patients who will have an endovascular intervention. Selective ovarian venography is performed with local anesthesia. After excluding the possibility of pregnancy, the femoral vein is catheterized using the Saldinger technique. The left ovarian vein draining into the left renal vein is selectively catheterized fluoroscopically, and nonionized contrast material of low osmolality is administered. Radiographs are taken with the patient in the semierect position. The same procedure is applied to the right ovarian vein since it may also drain into the right renal vein8.

At the present time, the use of transabdominal ultrasonography, TVUS, spiral computed tomography (CT), and magnetic resonance (MR) imaging is increasing for diagnostic purposes4,8,13,14. There are also studies that report that reflux in the left ovarian vein could be demonstrated with CT and MR imaging3,15. With the use of multidetector CT (MDCT), a larger region can be imaged in the same phase as compared with spiral CT. Reflux of the contrast material to the left renal vein generally occurs in the corticomedullary phase, ie, the arterial phase. When the contrast material is in the arterial system and the renal veins are in the arterial phase, simultaneous opacification of the ovarian veins shows reflux to the ovarian vein. It is not accurate to diagnose every case that shows reflux to the ovarian vein in CT or MR examinations as pelvic congestion, because studies have shown that reflux is found in 40% to 60% of asymptomatic women3,16. Pelvic varices can be visualized efficiently in 3-dimensional T1-weighted gradient echo MR sequences after the administration of intravenous gadolinium, and flow in the pelvic varices appears in high signal intensity17.

The cause of pelvic vein dilatation has not been clearly defined. Hormonal factors contribute to vasodilatation, and pelvic veins are exposed to high doses of ovarian hormones. Estrogen is a potent vasodilator. This effect occurs by various mechanisms, and estrogen receptors on human vascular cells are known to exist. Estrogen also causes nitric acid secretion, which causes relaxation of smooth muscle via stimulating nitric oxide synthase. Nitric oxide not only dilates the uterine vessels, but also causes pelvic pain that can be blocked by nitric oxide inhibitors. However, there is no evidence related to the increase in estrogen in the peripheral blood. There are indirect effects of estrogen on pelvic organs. Ultrasound studies have shown a significant increase in endometrial thickness and size in pelvic congestion17. In the present study, mean endometrial thickness was 9.2 mm in the group that had pelvic varices and 6.7 mm in the group that did not have pelvic varicose veins. This supports the notion that hormonal factors are important in pelvic congestion.

TVUS is extensively used as it is inexpensive and noninvasive2. TVUS may be used with patients who will be followed up in outpatient clinics, and a detailed examination can be completed within as little as 15 minutes20. In TVUS, a full bladder is not required. TVUS, in comparison with transabdominal sonography, is more beneficial in obese patients, patients with an incision scar, and patients who are hysterectomized5. Pelvic structures are examined at a higher resolution because of the proximity of the vaginal probe to the uterus and ovaries. Pelvic varices are observed with TVUS as multiple dilated veins that are >5 mm in diameter, located within the broad ligament of the uterus and have various venous Doppler ultrasound signals. In a study of 35 females whose adnexal vein diameters measured >5 mm in TVUS, Giacchetto et al identified reflux in the ovarian veins using retrograde venography2. For that reason, TVUS has been recommended as a noninvasive method in the diagnosis of pelvic congestion and varicocele1,2.

In the present study, the diameters of the pelvic veins in 30 of 100 women with pelvic pain were found to be >5 mm. In 24 of these patients (80%), no other pathology that could have caused pelvic pain was found. Pelvic pain in these patients was thought to be secondary to pelvic congestion. No pelvic varicose veins were detected in 50 patients that had pelvic pain.