Varicose disease represents the C2 class in the CEAP classification.2 Varicose disease is not the cause of severe morbidity per se (indeed some have seen VV as a simple cosmetic problem). Nevertheless, the complications varicose veins may cause are mainly inflammatory. This may lead to superficial thrombophlebitis and venous ulcers.1

Varicose veins are one of the commonest manifestations of chronic venous disease (CVD), occurring in 26% to 38% of women and to 10% to 20% of men.3 The condition starts early in life, as 10% of the schoolchildren in the Bochum study, aged between 10 and 12 years, had slight varicose veins.4
The venous valves play a key role in the genesis of VV, and the detection of reflux usually precedes the clinical appearance of the varicose disease as shown in the children of Bochum. At 10 years, reflux was present in 12%, and there were no VV in these children. At age 30, incidence of reflux increased to 26%, and VV appeared in 12% of the sample,5 while telangiectases appeared later (0% at 10 and 50% at 30).

Varicose veins are likely to increase with age. The prevalence of VV was 10% in 10-year-old Bochum schoolchildren (studies I to IV), and this further increased to 75% at the age of 30. It has now been demonstrated that VV lead to further complications, including leg ulceration. (Figure 1) In the 11-year follow-up of the chemical workers in the Basle study, the prevalence of venous ulcers was related to the severity of varicose veins.
Twenty percent of subjects with severe varicose veins developed ulceration compared with only 0.8% of those with mild varicose veins.6
Superficial thrombophlebitis is thought to be one of the possible complications of VV.7 (Figure 1)
The cause of superficial thrombophlebitis in patients with varicose veins has been postulated as being inflammatory cell infiltration secondary to denudation of the endothelium.1,8 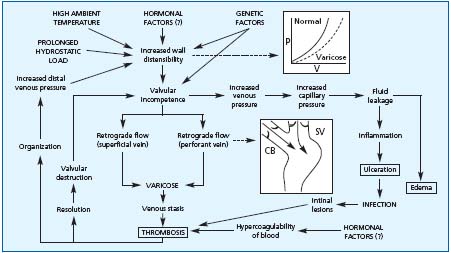 Despite the fact that the mechanisms causing symptoms have not been fully elucidated, it is widely reported that symptoms appear at the onset of venous insufficiency, and most of time, long before reflux and the appearance of varicose veins. The CEAP classification contains a C0S clinical class to include those patients with venous symptoms but without obvious signs of venous insufficiency. It is thought that pain related to CVD might mirror the endothelial activation with the cascade of inflammatory mediators released early in the disease process.
A recent cross-sectional study in patients with CVD (C0s to C6) showed that the percentage of patients presenting with any venous symptom significantly increased with CEAP C class.9 In this study, the prevalence of symptoms was 84.6% in patients with varicose veins.

Varicose veins:
the cause of quality of life impairment

Varicose veins affect the quality of life (QoL) not only by the real cosmetic problem they cause but also by the influence they may have on physical disability. In the San Diego study,10 spider veins and varicose veins were found to have a significant effect on the physical component scores of the generic QoL scale SF 36.
In a study of the relationship between signs, symptoms, and quality of life in patients with chronic venous disease, it was demonstrated that symptoms usually attributed to CVD are the factors with the most negative influence on the patient’s QoL.11 In the VEINES study,12 QoL scores decreased in C2 patients but were close to these in C1or C0s. This was attributable to the presence of symptoms that are most often associated with VV.
These previous studies showed the negative impact VV may have on the QoL of patients, most probably related to the presence of the associated symptoms. This has important consequences on the daily life of patients with CVD, even right from the onset of the disease, and long before the occurrence of reflux and VV.

OBJECTIVE OF TREATMENT OF CVD

Bearing in mind that varicose disease is most often painful and that it is likely to progressively lead to severe complications, there is a twin goal to be achieved by any treatment of VV:
– first of all, to rapidly and powerfully relieve patients from symptoms and pain in order to help them recover a better quality of life.
– secondly, to protect VV patients from further complications. For this reason, the biochemical processes involved in the CVD development are the main target of pharmacological treatment, since they are theoretically modifiable by systemic therapy.

How does Daflon 500 mg act in the prevention
of CVD development?

It has been observed that firm leukocyte attachment to the endothelial wall and subsequent migration of leukocytes into the interstitium is a mechanism of tissue damage during inflammation, and that attenuation of this phenomenon during ischemia-reperfusion could explain the positive effects of Daflon 500 mg on clinical edema.13,14 In an ischemiareperfusion model by Korthuis,15 Daflon 500 mg significantly inhibited leukocyte adhesion and migration through the venous endothelium as well as the protein leakage observed in this model. During restoration of venous blood flow, the number of rolling, adherent, and migrating leukocytes as well as cells exhibiting apoptosis in the parenchyma significantly decreased in animals pretreated with Daflon 500 mg compared with control subjects.
The molecular mechanisms in leukocyte adhesion and activation in CVD patients involve the increased expression of several types of cell adhesion molecules at the leukocyte surface, particularly L-selectins ( CD62L) and integrins (CD11b). The expression of these leukocyte adhesion molecules were substantially decreased on monocytes and neutrophils after a 60-day treatment with Daflon 500 mg in patients with CVD (C2 to C4).16 (Figure 2) This implies that Daflon 500 mg would prevent the inflammatory process in CVD. 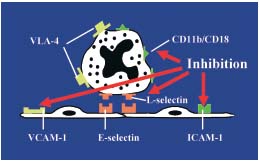 Figure 2. Inhibition of the leukocyte activation by Daflon 500 mg
(adapted from reference 16)

Daflon 500 mg: an action at the core of the
disease, ie, the leukocyte-endothelium
interaction.

Acquired valve dysfunction can occur due to inflammation, as evidenced by monocyte infiltration.17 It seems possible that activated leukocytes can migrate into the endothelium of proximal surfaces of the vein valves as well as proximal vein walls and promote destruction of supporting structures and remodeling of the valves with consequent valvular insufficiency. Immunohistochemical studies have demonstrated monocyte/macrophage infiltration into the valve leaflets and venous wall of patients with varicose veins.17
In a recent study by Schmid Schönbein et al, performed on a pharmacological model of hypertension,18 Daflon 500 mg was shown to limit the leukocyte infiltration into the vein valve and to inhibit the expression of leukocyte adhesion molecules.
As a result, Daflon 500 mg attenuated the vein and valve destruction and significantly reduced the reflux rate in a dose-dependent manner. By acting at the core of the disease, ie, the leukocyteendothelium interaction, Daflon 500 mg is the only phlebotropic drug with a protective effect on the valve endothelium. Daflon 500 mg delays the reflux appearance and is thus likely to prevent the evolution of the CVD towards complications.

Daflon 500 mg: a therapeutic efficacy
right from the first symptoms and in the longterm:

Effects of Daflon 500 mg on symptoms of CVD
In the Reflux assEssment and quality of lIfe improvEment, with micronized Flavonoids (RELIEF) study (n=4527, intention-to-treat population), patients receiving 2 tablets of Daflon 500 mg daily showed progressive improvement in the symptoms of CVI.19 After 6 months, patients in the per-protocol population showed significant improvement from baseline in the study outcome measures (ankle circumference, pain, leg heaviness, cramps, sensation of swelling; P <0.012). In the 1-year trial of 2 tablets of Daflon 500 mg daily in 170 patients,20 a significant reduction from baseline values in physician-assessed clinical symptoms (functional discomfort, cramps, and evening edema), ankle and calf circumference, and patient overall assessment of symptom severity was demonstrated at each 2-month evaluation (P <0.001). The rapid reductions observed during the first 2 months of treatment represented approximately 50% of the total improvement ultimately observed after 1 year of treatment. Continuing improvement in all parameters, albeit less rapid, was reported at each time point from month 2 to month 12.
Effects of Daflon 500 mg on leg edema
The reduction in leg edema with Daflon 500 mg, 2 tablets daily, was demonstrated in the Blume study in which the reduction was assessed by volumetric measurements after 6 weeks of treatment.21 In this study, the reduction in the mean volume was 263 mL (8%) in all patients, and was 392 mL (12%) in patients with leg edema associated with varicose veins. In both trials, the reduction in leg volume was highly significant (P <0.001).
Edema, measured by leg circumference, significantly decreased compared with baseline in patients in the RELIEF study.19

During the course of a 6-month period of treatment with Daflon 500 mg, changes in the QoL scores were comparable across the different CEAP subgroups.22 Only patients with symptoms had greater improvement in QoL than patients without symptoms. These changes in QoL scores resulted mainly from the alleviation of symptoms: improvement between D180 vs D0 in pain, heaviness, swelling and cramps was significant (P <0.001 for all symptoms).11 However, the associated signs (telangiectases, varices, edema, or skin changes) did not show such a direct impact on QoL.19
In this study, the dramatic improvement of QoL observed in patients treated with Daflon 500 mg can be interpreted as a result of symptom alleviation.

The preliminary results of a meta-analysis of five comparable, prospective, randomized, controlled studies identified from medical literature databases and from the files of the manufacturer in which 723 patients were pooled23 confirm that venous ulcer healing is accelerated by adding Daflon 500 mg, 2 tablets daily, to conventional treatments: the rate of complete ulcer healing at 6 months was in favor of the Daflon 500 mg group (61.3% vs 47.7%; OR =2.02; CI =1.05-3.89; P =0.035).

Pharmacological attenuation of leukocyte activation and leukocyte-endothelium interactions by Daflon 500 mg at the level of the venous valve, venous wall, and the microcirculation is an explanation of facilitation it brings to ulcer healing as well as the improvement in symptoms it allows. Daflon 500 mg also shows promise in preventing the continuing deterioration of venous function produced by valve insufficiency.13