Vulvar varicose veins occur in 10% of pregnant women, generally during month 5 of a second pregnancy. Anatomically, the vulvar veins have communicating branches and anastomoses between the pelvic wall and the veins of internal organs, between the internal and external iliac venous system, and with the circulation of the medial aspect of the thigh via the perineal veins. Vulvar varices are not caused by an increase in circulatory volume during pregnancy, but by increased levels of estrogen and progesterone. Vulvar veins are the target of these hormones.

Out of embarrassment, women rarely mention vulvar veins and they are not adequately sought in the physical examination with the woman in the standing position during month 6 of pregnancy and the first month post partum. Most often they are asymptomatic. Pain, pruritus, dyspareunia, and discomfort during walking are possible during pregnancy. Thrombosis and bleeding are rare. Treatment is symptomatic during pregnancy and curative during the post-partum period.

Vulvar varices are found on the labia majora and minora. Usually, they develop during month 5 of a second pregnancy. They occur in 10% of pregnant women. Out of embarrassment, women rarely mention vulvar veins, which in addition are not adequately sought in the physical examination with the woman in the standing position during month 6 of pregnancy and the first month after delivery. Pain, pruritus, dyspareunia, and discomfort during walking are possible during pregnancy. Thrombosis and bleeding are rare. Treatment is symptomatic during pregnancy, and curative during the post-partum period.
In this article, we will not discuss perineal varices in men or after crossectomy (extended saphenofemoral or saphenopopliteal junction ligation), pelvic varices, hemorrhoids, or superficial gluteal varices. 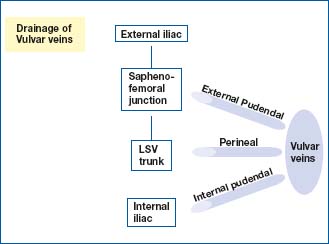 Thus, the vulvar veins have communicating branches and anastomoses between the pelvic wall veins and the veins of internal organ, between the internal and external iliac system, and with the circulation of the medial aspect of the thigh via the perineal veins (Figure 2). According to some authors, two sites of leakage may be more common in multiparous women: 1/4 perforating labial vein at the union of the posterior and the anterior 3/4 of the labia majora and the perforating vein in the inguinal canal.1,2 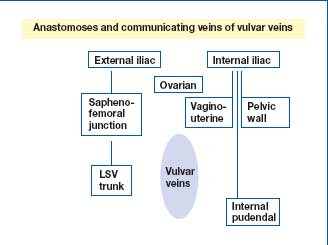 Vulvar varices occur in about 10% of pregnant women. They are rare during a first pregnancy and generally develop during month 5 of a second pregnancy. The risk increases with the number of pregnancies.3-5 Their incidence is underestimated for 3 reasons:
1. Women are embarrassed to talk about them,
2. They are not adequately sought with the patient in the standing position during the physical examination of month 6 of pregnancy and the first month after delivery,
3. Most often, they are asymptomatic.

Complications such as thrombosis or bleeding are rare. A superficial thrombosis presents as a painful, red (inflammatory) swelling, and is firm to the touch. It requires examination to look for an underlying deep venous thrombosis. Spontaneous bleeding appears to be of academic interest, and in practice is not observed. Bleeding during childbirth is associated with vaginal tears or an episiotomy; internal bleeding results in formation of a hematoma, primarily affecting the labia. Vulvar varices are not an indication for a cesarean section delivery.

In all cases, at the end of the examination, it should be possible to answer the questions: Are these vulvar varices:
1. an isolated finding?
2. related to worsening of circulation during pregnancy?
3. the visible part of pelvic varices?
4. related to a disorder (postthrombotic disorder, agenesis of an iliac vein, etc.)?


Figure 3. Clinical forms: varicose veins in the area of the long
saphenous vein should lead the clinician to look for a perineal reflux.
Figure 4. The diagnosis of vulvar varices is clinical.

4. To explore the abdominopelvic cavity. In fact, perineal and inguinal varices can be evidence of elevated pelvic pressure. Two investigations are differentiated: transparietal and endovaginal.15-18.

Angio-CT scan
This investigation is requested if pelvic congestion syndrome is associated with vulvar varices. The contrast medium progressively opacifies the uterine and ovarian veins by retrograde approach during the arterial phase. Abnormal venous flow can be found as well as tortuous and dilated veins.

Magnetic resonance angiography
This is a method of investigation recently used to evaluate ovarian venous reflux.19

Selective venography
This is the reference method because it provides comprehensive information on whether vulvar varices are associated with pelvic congestion syndrome. It is invasive as it involves venipuncture, catheterization, injection of iodine, and irradiation. It can visualize the leakage points during Valsalva maneuvers between the abdominopelvic cavity and the lower limbs, passing through the veins of the groin or the perineum.20,21

Treatment is symptomatic during pregnancy, and curative afterward if the varices persist.

1. During pregnancy
It is sometimes useful to refer the patient to a vascular specialist who is very familiar with the subject, to relieve the patient’s anxiety. Pruritus is treated by bathing with a foaming solution without soap, and then a water-based zinc oxide paste. Pain and heaviness are treated with high-dose phlebotonic agents.22

Lower-limb compression therapy is systematic in this varicose vein context. Use is made of class 2 calf-high stockings over which are placed class 2 thigh-high stockings. This is equivalent to a class 4 compression of the foot and calf and class 2 of the thigh. This combination is easier to place than class 3 or 4 articles.

As for superficial venous thromboses of the lower limbs, there is an increasing trend to prescribe low-molecularweight heparin at prophylactic dosage for vulvar thromboses, during the second and third trimesters of pregnancy, and for a short duration (5 days). This provides prophylaxis of deep vein thrombosis, is analgesic within 24 to 48 hours, and lyses the clot. Thrombectomy is thus avoided.

It should be remembered that pregnancy is a risk factor for venous thrombosis.

Bleeding requires compression therapy.
Sclerotherapy is always possible during pregnancy. It does not carry any particular risks either for the woman or the fetus. It is rarely performed because its beneficial results are uncertain in an unfavorable hormonal context.

2. After pregnancy
A month after delivery, vulvar varices most often have disappeared. Small, asymptomatic residual varices are seen again after 1 year. Large or symptomatic varices are managed with curative therapy. Sclerotherapy is the preferred method because it is very effective on these thin-walled varices. It is administered most often in a very superficial varicose vein blister under visual control using a very fine gauge needle (30G1/2) and a liquid sclerosing product. Sclerosing foamy products are more thrombogenic and are not indicated here.

The dose used is 1 cc of 0.5% or 1% Aetoxisclerol; or 0.33% or 0.5%.Trombovar.
Varices in the groin or the mons veneris can be treated with echosclerosis. Care should be taken to avoid the external pudendal artery for which an accidental injection produces disastrous lesions in the vascular area downstream. Identification with the duplex color technique, by greatly increasing gains in the future area of injection, is essential to keeping in mind that “what is not seen exists.”5-23

Phlebectomy remains possible for perineal varices,24 but is little performed because of the good results obtained with sclerotherapy. The same holds true for ligation of the labial or marginal perforating veins with the patient in the lithotomy position after identification by sonography.

When vulvar or perineal varices exist together with pelvic congestion syndrome, we consider that it is preferable to start treatment using a sclerosing solution administered by injection and under visual control of varices in the crotch. After this simple-to-administer treatment, we observe the disappearance of the vulvar or perineal varicose vein and are often surprised to learn that the patient reports a marked decrease in symptoms of pelvic congestion. Conversely, patients who undergo embolization of pelvic varices continue to present with vulvar and perineal varices.25-27

Hemodynamic logic dictates that a high reflux should be treated first. In this regard, our experience seems to favor sclerotherapy, which is not expensive, is simple and confined to the crotch area, as first-line therapy. Currently, we do not have a randomized trial to assess results.

Vulvar varices develop during month 5 of a second pregnancy. Their frequency is underestimated. Screening to detect them with the patient standing is desirable at month 6 of pregnancy and 1 month after delivery. During pregnancy, Doppler sonography is justified by early occurrence of such varices at the start of a first pregnancy, by their unilateral presentation, and by a thrombosis. If these varices persist after delivery, a visit to a vascular specialist is desirable and treatment with sclerotherapy is almost always possible.