Download this issue Back to summary
UIP INITIATIVES AND AWARDS

The “C” of CEAP: suggested definitions and refinements.
An International Union of Phlebology Conference of Experts

The CEAP classification was created in order to facilitate meaningful communication about CVD and serve as a basis for a more scientific analysis of management alternatives. It was found that intraobserver reproducibility was 85% while interobserver was of 47%. A conference of experts on its refinement met at the 14th World Congress of the International Union of Phlebology in Rome (September 2001).

The key points they worked on were the definitions of clinical items and the refinements of the “C” of CEAP.

They considered 3 mm to be size limit of a reticular vein, because this discriminates better between class 1 and class 2 than 4 mm.

They have taken into account “corona phlebectatica,” but it is still not clear where to locate this in the CEAP.

The last refinement refers to C4 (skin changes) making a differentiation between C4a, such as eczema and pigmentation, and C4b, such as lipodermatosclerosis and atrophie blanche.

Transcellular (channels and carriers) and paracellular (tight junctions) pathways are responsible for water and solution exchanges.

The tight junctions are localized on the apical side of endothelial cells (zona occludens) and are the major regulators of permeability. Tight junctions are created by several molecules (occludin, claudin 1, 3, and 5) which influence the passage of fluids. The aim of this study was to determine if these junctions are involved in the pathology of chronic venous insufficiency.

The mRNA and protein expression pattern of tight junction molecules was studied in 8 patients with edema, 8 patients with venous leg ulcers, and 8 healthy control subjects.

Biopsy specimens were taken before and 4 weeks after compression therapy. mRNA-expression was determined by using reverse-transcriptase and polymerase chain reaction and protein-expression by Western blot from tissue specimens.

Quantification performed to determine the expression for tight junction molecules displayed diminished expression of claudin-1 and -5 in patients with chronic venous insufficiency in comparison with healthy controls on mRNA as well as the protein level. No statistical differences could be detected for occludin and claudin-3 between the edema group and the healthy group. There was a significantly elevated expression of mRNA and protein level for occludin and claudin-3 in the leg ulcer group in comparison with the healthy group.

After 4 weeks of compression therapy there was significantly elevated expression of claudin -1 and -5 on mRNA and protein level than prior to treatment for both the edema and the leg ulcer group. Occludin and claudin-3 levels did not change. So, compression therapy tightens the paracellular pathway via elevated expression of specific tight junction molecules, and thereby prevents the progression of chronic venous insufficiency due to inhibited permeability of fluid into the perivascular tissue.

Nomenclature of the veins of the lower limbs:
an International Interdisciplinary Consensus Statement

The anatomy of the veins of the lower limbs is extremely variable. Associated with this fact there is a deficiency in the nomenclature of these veins that is leading to confusion and a misinterpretation of the appropriate methods in the treatment of venous disease.
In September 2001, during the 14th World Congress in Rome and under the auspices of the IUP, a consensus document regarding the nomenclature of the veins of the lower limbs was developed, with some important changes in the terminology.
The veins of the lower extremities are divided into three systems: the superficial, the deep, and the perforating venous systems. These are located in two main compartments: the deep compartment (bounded by the muscular fascia), and the superficial compartment (bounded deeply by the muscular fascia and superficially by the dermis).
Within the superficial compartment a separate saphenous compartment must be introduced. This compartment is bounded superficially by the hyperechogenic saphenous fascia. (Figure 1)
The names of a few deep veins have been changed and the list has been extended. The term “superficial femoral vein” should not be used because it is a deep vein, so only the “femoral vein” designates the vein that originates from the popliteal vein and courses the femoral canal. The term “sural veins” is not sufficient to designate the venous system in the calf. This should be designated as “soleal veins” and “gastrocnemius medial and lateral veins.”
In the superficial compartment the names of some veins have also been changed. The term “great saphenous vein” (GSV), should be used instead of terms such as long saphenous or internal saphenous vein. In the same way the term “small saphenous vein” (SSV), should replace the previous short, external, or lesser saphenous vein.
The perforating veins have been associated frequently with personal names from a historical point of view. Instead these veins are classified on the basis of their topography and divided into: perforators of the gluteal muscles, perforators of the thigh, perforators of the leg, ankle perforators, and perforators of the foot.
This new terminology which was published in the Journal of Vascular Surgery, in August 2002,(1) will facilitate the appropriate international exchange of information. 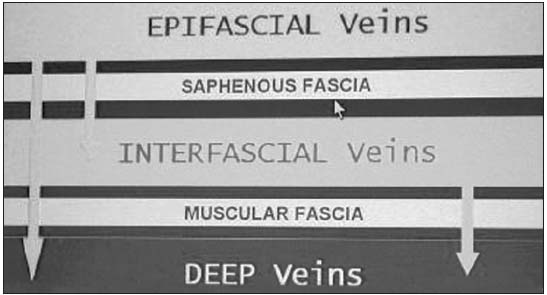 Figure 1.
Compartments
(superficial and
deep) of the
venous system
in lower
extrimities.

Apoptosis is involved in many vascular diseases. Until now there have been very few data available concerning the role of PCD (programme cell death) in chronic venous insufficiency. In the presented paper an importance of the apoptosis, its stimulus factors and regulatory mechanisms (p53, p21, bax, bcl-2, and Fas) in patients with primary varicose veins were investigated. According to the morphometric analysis of the vein wall content (collagen, elastin, SMC- smooth muscle cells) in patients with varicose veins, a significant accumulation of the extracellular matrix was documented, with concomitant reduction of the SMCs within the vein media. This process can be related to the SMC phenotype change into secretory one. Apoptosis is a process controlling the vein wall hemostasis, leading to a decrease in the number of SMCs (pathological cell elimination). In patients with varicose veins this process is downregulated and leads to the accumulation of the extracellular matrix (probably stimulated by TGF – â activity). In the paper the correlation between apoptotic index (TUNEL assay) and p53 expression (RT-QPCR) was documented in young patients with primary varicose veins. In the vein wall adventitia the presence of inflammatory cells (macrophages and lymphocytes) was confirmed, however, in patients with varicose veins lower proapoptotic protein Bax expression in this layer was observed. Apoptosis is an important factor for vein wall homeostasis maintenance, and plays an important role in the vein wall changes leading to varicose vein occurrence.

It has been established that a reduction in the level of elastin plays an important role in the appearance of varicose veins (VV). Elastin is formed of the reticulation of tropoelastin monomers over a framework of fibrillin-rich microfibrils and latent transforming growth factor-â binding proteins (LTBPs). LTBPs modulate both the expression and the deposition of growth factors such as tissue growth factor-â (TGF-â) in the extracellular matrix and thereby, is able to regulate the development of elastic tissue. Lysyl oxidase (LOX) belongs to a heterogeneous family of enzymes that oxidize primary amine substrates to reactive aldehydes. LOX is known mainly for the extracellular catalysis of lysine-derived cross-links in fibrillar collagens and elastin.
Little is known about some venous wall compounds as fibrillin and LTBPs, and factors involved in tissue remodeling in which LOX and TGF-â are involved. The aim of the research performed in the framework of the 2003-2005 UIP Fellowship is to examine, in vitro and in vivo, the expression of LOX, tropoelastin RNAm, and the pattern expression of different elastic fibre components found in the extracellular matrix of varicose veins.