Understanding the mechanisms of lymphangiogenesis: a hope for cancer therapy?

Download this issue Back to summary
Jonathan P. SLEEMAN1,2

The lymphatic vasculature arises mid-gestation following establishment of the cardiovascular system (reviewed in1). Endothelial cells from the anterior cardiac vein commit to the lymphatic lineage and sprout and migrate to form the primary lymph sacs in the jugular region. Centrifugal sprouting lymphangiogenesis from these and further lymph sacs that form near other major veins, followed by merging, remodeling, and maturation of these separate lymphatic capillary networks, populates the developing embryo with its lymphatic vasculature. Mesenchymal progenitor cells may also contribute to this process.2 In the adult, lymphangiogenesis is only thought to be activated during wound healing and tissue regeneration.3-5 Pathologically, lymphangiogenesis can also be induced in chronic inflammatory lesions6,7 and in the context of tumors (see below).

A major breakthrough that has permitted lymphangiogenesis to be studied has been the discovery of proteins that are relatively specifically expressed in LECs, allowing these proteins to be used as markers of lymphatic vessels. The most important of these are the transmembrane receptor tyrosine kinase VEGFR-3, the mucin-type transmembrane glycoprotein podoplanin, the CD44-related cell surface hyaluronan receptor LYVE- 1, and the homeobox transcription factor Prox-1.8 Although these markers have been very useful, it is important to note that none of them is exclusively or homogeneously expressed on all lymphatic vessels, and therefore the detection of a combination of these markers is recommended for the reliable identification of lymphatic vessels.9

Molecular regulation of lymphangiogenesis: from the cell surface…
The process of lymphangiogenesis is typically activated by extracellular signals such as growth factors that bind to their cognate receptor on the cell surface. As a consequence, intracellular signal transduction pathways are in turn activated that terminate in the nucleus and regulate the expression of genes responsible for orchestrating lymphangiogenesis. The archetypal molecular regulator of lymphangiogenesis on the surface of LECs is the vascular endothelial growth factor receptor family member VEGFR-3. VEGFR-3 is activated by VEGF-C and VEGF-D, members of the vascular endothelial growth factor family.15 Dimers of VEGFR-3 bind to these ligands and as a consequence tyrosine residues in the cytoplasmic portion of the dimerized receptor are trans-phosphorylated by the intracellular kinase domains of the VEGFR-3 protein. This ligandinduced autophosphorylation of VEGFR-3 activates a variety of signal transduction pathways (see below) that regulate expression of a variety of genes.16 VEGFR-3 is prominently expressed on the tip cells of sprouting lymphatic capillaries.17 These tip cells are crucial for the outgrowth of new lymphatic vessels.

VEGFR-2, another member of the vascular endothelial growth factor receptor family expressed on LECs, is also implicated in the regulation of lymphangiogenesis.18-20 The classical VEGFR-2 ligand VEGF-A can induce lymphatic hyperplasia.21,22 In addition, proteolytic cleavage of VEGF-C and VEGF-D allows these ligands to activate VEGFR-2. Activation of VEGFR-2 and VEGFR- 3 on LECs has different effects: VEGFR-2 activation leads to vessel enlargement, while VEGFR-3 activation leads to sprouting lymphangiogenesis.17 Furthermore, VEGF-D induces the formation of heterodimers between VEGFR- 2 and VEGFR-3, which may lead to differences in the signal transduction pathways that are subsequently activated.23,24 Our current understanding is that VEGFR- 2 and VEGFR-3 cooperate to regulate LEC migration and proliferation25 and that VEGFR-2 activation may be a modifier but not necessarily an initiator of lymphangiogenesis.17

A number of other cell surface molecules on LECs regulate VEGFR-2 and VEGFR-3 activity through binding to their ligands, including _9_1 integrin26 and the semaphorin co-receptor neuropilin-2.27 The _9_1 integrin binds to VEGF-A, -C and -D, while neuropilin binds to VEGF-C and -D. The lymphangiogenesisstimulating activity of VEGF-C and -D has been shown to be dependent on _9_1 integrin.26 Neuropilin-2 is cointernalized with VEGFR-3 upon ligand binding and is thought to regulate VEGFR-3 activation.27

… to the nucleus
The intracellular signal transduction pathways and transcription factors that ultimately coordinate the complex cellular processes of proliferation, migration, invasion, and tubule formation that are required for the formation of new lymphatic vessels are still being unraveled. Activation of VEGFR-3 by its ligands VEGF-C or VEGF-D results in protein kinase C–dependent activation of the MAPK signaling cascade (ERK, JNK) and induction of Akt phosphorylation.24,37 Specifically, ligandinduced phosphorylation of VEGFR-3 tyrosine residue 1063 on the cytoplasmic tail of the receptor recruits CRKI/II which in turn induces expression of the transcription factor c-jun via JNK1/2. In addition, phosphorylation of tyrosine residues 1230/1231 on the cytoplasmic portion of VEGFR-3 recruits GRB2, activating in turn ERK1/2 and AKT. Lymphangiogenic signaling by FGF-2 also activates the Akt/mTOR/p70S6 kinase pathway,38 indicating the importance of this pathway in the orchestration of lymphangiogenesis. Consistently, a specific inhibitor of mTOR called rapamycin is able to inhibit tumor-induced lymphangiogenesis and lymphatic metastasis.39 Furthermore, members of the sprouty/spred family of proteins can inhibit pro-lymphangiogenic VEGF-C signaling by suppressing VEGFR-3–mediated ERK and Akt activation.40

The cytoplasmic enzyme cyclooxygenase (COX)-2 is responsible for the synthesis of prostanoids. Recently it was reported to induce expression of VEGF-C by macrophages, and thereby to contribute to lymphangiogenesis.41 How this works at the molecular level remains to be elucidated.

One of the end points of pro-lymphangiogenic signal transduction pathways is transcriptional activation. A number of transcription factors have been implicated in determining LEC identity, including Foxc-2, Elk3 (Net), Prox1, and Sox18.15 Sox18 regulates the transcription of Prox-1,42 a homeobox transcription factor that plays a central role in determining LEC morphology and behavior43 through regulating the transcription of a battery of genes including the α9 integrin subunit.44 How these transcriptional regulators are wired into the regulatory pathways that orchestrate lymphangiogenesis largely remains unclear. In addition, the way in which transduction pathways regulate cytoskeleton dynamics and cell adhesion properties that must be central to the process of lymphangiogenesis remains to be identified. A recent insight comes from the discovery of EMS1, a secreted glycoprotein that is specifically expressed in LECs, transcriptionally upregulated by VEGF-A and -C in these cells, and which potentiates the proliferation and migration.45

The number of papers published on lymphangiogenesis and cancer has increased progressively since the year 2000, with more than 160 papers projected for 2009 (Figure 1). A detailed review of all 700 or more papers is beyond the scope of this article. I therefore summarize here the main outcomes of these studies as this research area has been reviewed in detail9,48,49 and critically evaluate the evidence that tumor-induced lymphangio – genesis contributes to lymph node metastasis and poor patient survival. 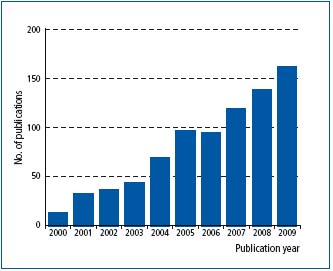 Figure 1. Graph showing the rise in publications that address lymphangiogenesis and cancer since the year 2000. Values are based on papers included in PubMed (www.pubmed.gov). The value for 2009 is projected on the basis of the number of papers published in the first quarter of 2009.

Specific markers of LECs have been used to study the location and density of lymphatic vessels in the context of tumors for a wide variety of different types of cancer. Increased numbers of lymphatic vessels have been reported peripherally within the stroma that surrounds the tumor, as well as within the tumor itself. For some but not all types of cancer, lymphatic vessel density (LVD) peritumorally and/or intratumorally has been correlated with clinical parameters such as lymph node metastasis and poor prognosis. Conflicting data have been published in the case of certain types of cancer such as breast and colorectal carcinomas, as some studies have reported a correlation, while others have not.49

Studies of many different types of human cancers show that the expression of lymphangiogenic factors increases in more advanced malignant stages of the disease. These factors may be produced by the tumor cells themselves, or by stromal fibroblasts or tumor-associated macrophages within the tumors. The most intensively studied lymphangiogenic factors in the context of cancer are VEGF-C and -D. Many but not all such studies report a correlation between the expression of these molecules and tumor-associated LVD, lymph node metastasis, and poor prognosis.9

Animal models have provided strong experimental evidence for a role for tumor-induced lymphangio – genesis in promoting metastasis. Specifically VEGF-A, VEGF-C, VEGF-D, COX-2, and PDGF-BB can contribute to tumor-induced lymphangiogenesis, as inhibition of the activity of these factors in vivo has been shown to suppress tumor-induced lymphangiogenesis (eg, 31,41,55- 57). COX-2 is likely to act indirectly by inducing expression of VEGF-C.41 The majority of these studies using animal tumor models have focused on VEGF-C and VEGF-D. Ectopic or transgenic overexpression of VEGF-C or VEGF-D in tumor cells has been shown to promote lymphangiogenesis in a variety of tumor models, as evidenced by enhanced proliferation rates in tumor-associated lymphatic vessels and increased LVD and/or lymphatic vessel diameter (reviewed in 48). Ectopic expression of these factors also concomitantly promotes metastasis in regional lymph nodes, and in many studies also in vital organs such as the lung.55,58-63 Conversely, inhibition of ligand-induced activation of VEGFR-3 in several different animal tumor models suppressed tumor-induced lymphangiogenesis but had no effect on pre-existing vessels. Importantly, this inhibition also reduced the onset or incidence of lymph node metastases, and in many cases also inhibited the formation of metastases in other organs such as the lung.55,61,64-67 These findings are consistent with the notion that VEGFR-3 activation on LECs promotes lymphangiogenesis in the tumor vicinity, thereby increasing the likelihood that invasive tumor cells will enter the lymphatic vasculature and traffic to regional lymph nodes and beyond.

In summary, there is substantial evidence that tumorinduced lymphangiogenesis does occur and is associated with metastasis, particularly within regional lymph nodes, but also in other organs. However, tumor-induced lymphangiogenesis is not an obligatory feature of tumor progression, and metastasis can occur in its absence. This reflects complex relationships between tumors and lymphatic vessels that are different not only for different types of cancer, but also for each individual tumor depending on its precise location and genetic constitution.

Tumor lymphatics: targets for therapy?
The observation in animal models that inhibition of tumor-induced lymphangiogenesis is sufficient to reduce the incidence of metastasis, together with correlative studies on a variety of human cancers that connect lymphangiogenesis with poor prognosis, has raised interest in tumor lymphatics as a possible therapeutic target. For example, following the diagnosis of cancer and during subsequent therapy and remission, chronic inhibition of tumor-induced lymphangiogenesis could potentially reduce the incidence of metastasis. Another potential therapeutic setting might be in cases where patients have relatively slow-growing benign cancers, but where surgical intervention is judged to outweigh the benefit to the patient. In these cases, the tumor is often left in situ. However, a proportion of patients will progress and develop metastases (eg, 70), and thus chronic suppression of tumor-induced lymphangiogenesis may be beneficial for survival. A variety of pre-clinical models have demonstrated that lymphangiogenesis can be blocked at various levels of pro-lymphangiogenic signaling cascades, including through the use of blocking antibodies, soluble receptors, synthetic chemical inhibitors, natural substances, and shRNA (see Figure 2; reviewed in 9). 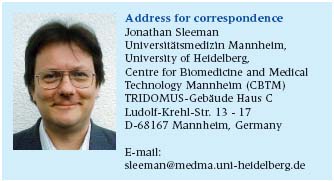