Air plethysmography (APG) and ambulatory venous pressure (AMVP) measurement are functional tests used in chronic venous disease (CVD). We review our experience with these tests in 8456 CVD limbs seen over a 20-year period. The venous filling index (VFI90) parameter in the APG test shows progressive significant worsening as reflux and disease severity increase. Venous volume (VV) also increases—a sign of venous pooling—with reflux and disease progression. This is compensated to a large extent by a parallel increase in ejection volume to as much as three times normal. There is little correlation between any of the APG and AMVP parameters. APG is a sensitive test and is abnormal in 70% of a wide spectrum of CVD limbs. AMVP measurement is more selective and abnormal in only 37%. There is an overlap of about 30% between the tests, which increases to 66% in advanced disease. AMVP is seldom abnormal (7%) if APG is normal. Venous refilling time (VFT) is the preferred AMVP parameter, as percentage drop in AMVP is abnormal in only 4% of limbs with normal VFT. Ambulatory venous hypertension is a feature of reflux, not obstruction. In conclusion, APG is a reliable test to assess severity of reflux. AMVP is recommended in advanced CVD as ambulatory venous hypertension indicates end-stage disease.

Duplex ultrasound is the preferred screening test in chronic venous disease (CVD) and in most centers the only test used for evaluation. Air plethysmography (APG) and ambulatory venous pressure (AMVP) measurement, once popular, have gradually declined in use to near extinction. However, these are functional tests based on sound basic physiology. They can provide a more quantitative evaluation of reflux and disease severity than duplex ultrasound alone.

Water plethysmography has been used by physiologists to study calf-pump function and venous flow for many decades. APG is a commercial version ofplethysmography that popularized its use in the clinical realm. Christopoulos and Nicolaides laid out the technical protocol and parameters for clinical use of this technique in CVD.1 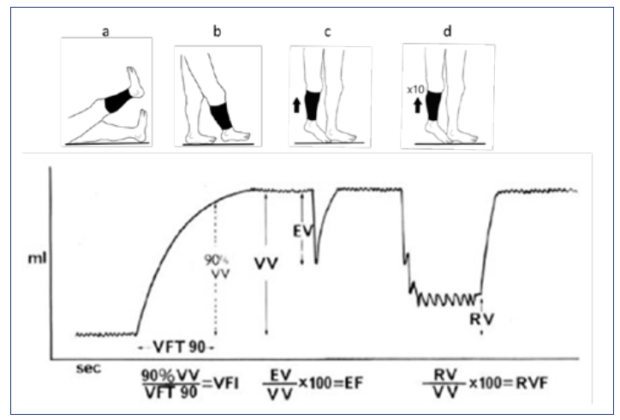 AMVP measurement is often described as a global test of calf-pump function. This rests on the belief that abnormalities in the complex mechanism that ejects blood from the calf will be reflected in AMVP. Earlier versions of the test used a variety of test protocols. Nicolaides and Zukowski standardized the protocol that has since been widely adopted.2 Access is obtained through a vein on the dorsum of the foot. It is useful to record supine foot venous pressure at the start, as this measure is informative for assessing venous obstruction. The patient is asked to stand still, holding on to a support and bearing weight on the opposite leg. Resting erect foot venous pressure is measured with the transducer taped to the foot by the needle. The patient is asked to perform 10 tiptoe stands and then resume the resting position. The venous pressure drop (% drop) during exercise and the VFT per second are recorded. A percent drop less than 50% and VFT under 20 seconds are considered abnormal.

In our clinic, duplex ultrasound is the main screening instrument in CVD. APG is used at the next level as the main hemodynamic instrument. In complex cases, AMVP measurement is used simultaneously with APG (Figure 2),3 as the maneuvers are the same. 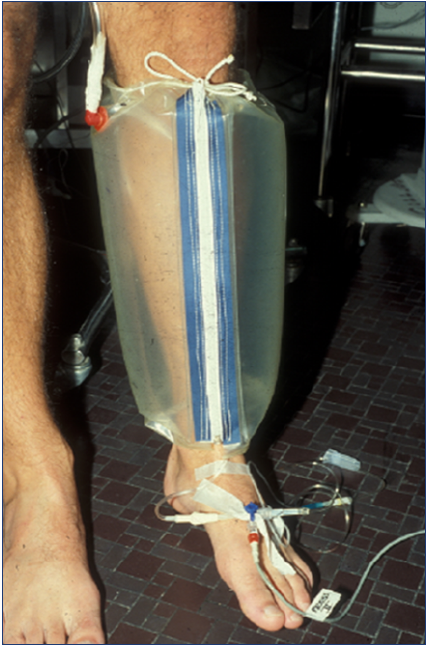 The results reported below are from an analysis of 8456 CVD limbs in 4610 patients treated over a 20-year period (1995-2016). APG data were available in 7910 limbs; simultaneous APG and AMVP data, in 4766 limbs. Reflux distribution by anatomic system is shown in Table I. No reflux was present in 33% of the limbs. Obstruction was evidenced in 967 limbs on the basis of intravascular ultrasound (IVUS) examination. 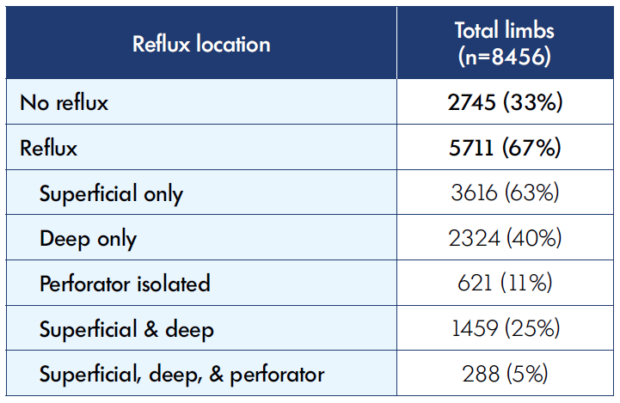 Table I: Anatomic distribution of reflux* in limbs investigated for chronic venous disease * Reflux was defined as reverse flow >1-second duration both for the deep and superficial veins

There was a significant stepwise increase in VFI90 with increasing clinical and reflux severity, as reflected in these tables. The reflux segment score assigns one point each for the following vein segments if they are refluxive: great saphenous vein, small saphenous vein, femoral vein, deep femoral vein, popliteal vein, posterior tibial vein, and perforator vein; a score of 0 implies no reflux; and a score of 7 implies all segments are refluxive.4 A similar progressive increase in VV representing venous congestion is also seen in parallel with an increase in VFI90. These twin increases are also seen in other tables that use different classifications to grade disease severity.

AMVP results in the various categories represented in Tables II-V are shown as percentage drop and VFT. AMVP findings are different from APG results in several respects: AMVP abnormalities appear to be less common and more selective; AMVP abnormalities are (generally) found only in more advanced CVD with severe clinical or reflux manifestations. In less severe categories, neither percentage drop nor VFT breaches normal thresholds. In some tables, only the VFT is abnormal, whereas the percentage drop remains within normal parameters. Nevertheless, a general deterioration in AMVP is recognizable with disease progression (eg, see Table V). An abnormal AMVP test result is arguably more important than an abnormal APG result, as many believe that there is a pathophysiologic connection between venous hypertension and CVD.

AMVP was abnormal in only 7% of CVD limbs that have normal APG findings. So, APG and clinical/reflux severity can be used to decide when to perform an AMVP test.

There is substantial support in the literature for the usefulness of VFI90 to assess reflux severity.5-7 Support for other parameters provided by the instrument (ejection fraction; RVF) is mixed.8 Although previously suggested that RVF may serve as a noninvasive measure of ambulatory venous hypertension,9 with earlier work appearing to support this notion, recent analysis found poor correlation between the two measures (Figure 3).3 There is little correlation between APG and AMVP parameters, considered looselyas surrogates (Table VI). This is not surprising as the two techniques measure different physical properties in different parts of the leg (Figure 4).3 A significant correlation would require a linear volume/pressure relationship, known not to exist in veins. 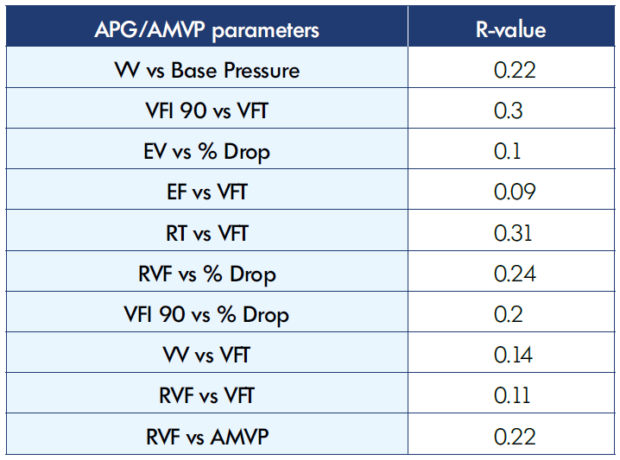 Figure 5 shows ejection volume plotted against venous volume (VV) in a large cohort of CVD limbs.3 As the VV increases with advancing disease, so does the ejection volume with a high degree of correlation (r=0.7), increasing its output two to three times, keeping up with the increase in VV. This powerful compensatory mechanism tends to maintain a normal RVF (<50%) even in severe reflux categories. VV was normal in groups shown in Tables II-V including in the worst categories. This refers to means, not individual cases.

Calf ejection is known to be compromised by mechanical deficiencies of the calf pump, such as joint immobility or neuromuscular calf-muscle disease.10-12 A “calf-pump failure” of a different sort, one that is functional rather than mechanical has been frequently mentioned in the literature. The definition of calf-pump failure has varied from a reduction in ejection fraction to the more often used increase in RVF. It is possible to define four different groups using different combinations of normal and subnormal ejection fraction and RVF as shown in Table VII. Mean values and prevalence of APG and AMVP parameters in those categories are also shown. Isolated RVF abnormality appears to be rare. A combination of reduced ejection volume and increased RVF (Group 4) occurs more often, but an overall clear pattern is not visible. Group prevalence of AMVP abnormality was also worst in Group 4. Further clarification in this area is needed. 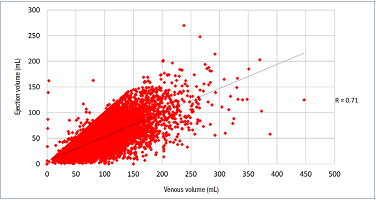 Nicolaides has pointed out that with each calf-pump action, a portion of reflux volume will be retained, adding to RVF. Ejection fraction seldom is higher than 75% even with very efficient calf ejection; an ejection fraction approaching 100% would be required to completely prevent reflux volume accumulation.13

There is general agreement that APG evaluation according to the standard protocol provides little diagnostic information of value in venous obstruction. A new protocol described by Lattimer has drawn considerable interest. It is undergoing evaluation in several centers.14

It is commonly assumed that venous obstruction is associated with ambulatory venous hypertension. AMVP abnormalities were observed in IVUS-proven obstruction (generally) only in cases where associated reflux was present (Figure 6).3 Ambulatory venous hypertension largely appears to be a property of reflux, not obstruction. Curiously, resting foot venous pressure in the erect position is also elevated, likely related to partial erasure of arteriolar-venous reflux in CVD.15 Elevated supine venous pressure appears to be associated with obstruction, not reflux.15

Figure 6. Of limbs with intravascular-ultrasound–proven obstruction, 72% had reflux and 28% did not. Abnormal ambulatory venous pressure (AMVP; % drop and/or VFT) was present in 44% of the obstructed limbs. The overwhelming majority (87%) occurred in association with reflux in obstructed limbs. The incidence of AMVP abnormalities was small (13%) in obstructed limbs without reflux. *Area not to scale. After reference 3: Raju et al. J Vasc Surg Venous Lymphat Disord. 2019;7(3):428-440. © 2019, Society for Vascular Surgery. Published by Elsevier Inc.

APG is a reliable functional test for assessing severity of reflux, whereas AMVP measurement is recommended in the setting of advanced CVD, as ambulatory venous hypertension indicates end-stage disease.