In the continuing absence of a consensus definition, functional venous disease (FVD) can be described as encompassing any situation in which, over time, hemodynamic changes in venous drainage transform the risk factors for varicose veins into overt disease. The condition includes patients with primary varicose veins. This description is consistent with epidemiological evidence of incipient reflux, and encompasses functional chronic venous insufficiency (CVI) due to extravenous causes, also described as the functional phase of the prevaricose syndrome. In addition, it includes the syndrome of constitutional functional venous disease (CFVD) in which decreased vein wall tone and stasis microangiopathy are associated with the symptoms (heaviness, tension, and pain) and certain signs (lower-limb edema, cellulite, and permanent acral hypothermia) of venolymphatic hypertension, but without reflux, organic macrovascular disease or progression to overt varicose disease.

In chronic venous insufficiency (CVI), blood flow is impaired by acquired or congenital venous dilatation or obstruction. The hemodynamic common denominator in all venous disease is reflux due to valvular incompetence, obstruction (thrombosis), or congenital venous or extravenous abnormalities.1 Reflux can be long or short, depending on the junction (saphenofemoral or saphenopopliteal) or perforator involved.
In functional venous disease (FVD), the symptoms of CVI occur in the absence of organic superficial and/or deep venous disease. Classic-variant FVD is due to extravenous impairment of the push-and-pull mechanisms of venous drainage. The push mechanism consists of compression of the venous plexus in the sole of the foot, the calf muscle pump, and the pulsation of the contiguous arterial system. Pull is exerted by the diaphragm and negative mediastinal pressure.
Multiple extravenous factors can impair these mechanisms: sedentary lifestyle, obesity, respiratory and cardiac disease, work in the standing position, repeated pregnancy (inferior vena caval compression, altered endocrine environment, inadequate diaphragmatic excursion), peripheral arterial disease (where low perfusion pressure is combined with low or absent pulsatility), lower-limb disease (nerve root pathology, foot arch deformities), and anatomically inappropriate shoes.
The consequences range from transient edema to venolymphedema and trophic lesions, without organic venous disease. Significant reflux, whether long or short, is absent. Venous drainage from the periphery is simply impaired, resulting in stasis or slow flow. The relative contributions to the cause of varicose veins by these extrinsic factors and a still putative inherited predisposition remain unknown.2 However, the combination of flat feet, obesity, sedentary lifestyle and/or respiratory failure is almost inevitably associated with venolymphedema, even in the absent of a positive family history.
Cloarec et al defined a prevaricose syndrome encompassing intermediate phases between a normal venous system and overt varicose disease.3,4 Careful investigation for reflux in symptomatic but apparently healthy subjects revealed incipient hypotonicity of the vein wall, altered venous reactivity, hyperdistensibility, and wall thickening. Cloarec et al argued that subjects at risk required routine screening and prophylactic intervention to avoid progression to overt disease triggered by coexistent extravenous risk factors.
A subsequent prevalence study, the Italian Acireale project, found a prevaricose syndrome (family history, altered venous compliance) in only 22.6% of its population; it was absent in 15.9% of symptomatic subjects, whom the authors classified as having hypotonic venous disease. They concluded that this hypotonic variant of FVD was unlikely to be a prodromic phase of varicose disease, ie, prevaricose syndrome, since their controlled 10-year follow-up showed progression to overt disease only in the ‘valvular incompetence without varicose veins’ group.5 These results were consistent with those of Cloarec et al, who found no progression to overt varicose disease in 75% of their symptomatic population.
In addition to prevaricose syndrome, these studies thus identified a group of patients with the symptoms of CVI (peripheral edema, and heavy, restless, and painful legs), but with no specific risk factors, no evidence of reflux, and no progression to varicose disease. 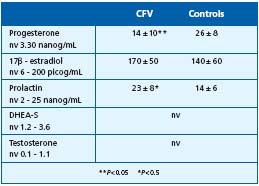 In women, endocrine changes account for many dysfunctional complaints typical of the childbearing years, including idiopathic cyclic edema, menstrual migraine, and premenstrual mastalgia. In women with FVD, they also account for diffuse edema, specific adipose tissue distribution, a menstrual symptom pattern, and cellulite.
The demonstration of venular and endolymphatic hypertension is consistent with postural edema and could be considered the microvascular pathogenesis of cellulite. Our study identified a constitutional FVD syndrome – CFVD – defined by symptoms of venolymphatic hypertension (heavy, restless legs, tension, cramps, pain), decreased venous tone, cellulite, and permanent acral hypothermia, and by the absence of reflux or any evidence of structural macrovascular pathology on clinical examination or standard methods of investigation. The signs differentiating it from the prevaricose patients described by Cloarec et al

FVD includes two major syndromes: 1) a functional prevaricose syndrome of CVI symptoms due to extra-venous causes, with a high risk of progression to overt varicose disease; and 2) a CFVD syndrome of symptomatic venolymphatic hypertension, decreased venous tone, cellulite, and permanent acral hypothermia, with no significant reflux, no organic macrovascular pathology, and no progression to overt varicose disease.