Venous aneurysms are rare vascular disorders which have been described throughout the venous system and can be seen at any age.1,2 The lower extremities are the most frequently affected, the popliteal vein being the most common site, followed by aneurysms of the head and neck, abdominal veins, and thoracic veins.
The definition of venous aneurysm remains controversial, and there is no precise size criterion in the literature to distinguish between venous dilatation and venous aneurysm. Aneurysms are described as saccular or fusiform, an important distinction not only for anatomical reasons but also in terms of hemodynamic considerations and choice of surgical treatment.

Venous aneurysms of the neck and face

These aneurysms are rare and usually congenital. The internal jugular vein is the most common site. Most aneurysms of this type have been described in young adults and children. They account for about one third of all aneurysms. A venous aneurysm of the neck presents as a soft, compressible mass that enlarges on Valsalva maneuver or other expiratory effort with the glottis closed. The natural history of these aneurysms is benign, and the indication for surgery is often for cosmetic reasons.

Some 60 cases have been reported, about two thirds of which involved the superior vena cava or azygos vein. Although in most cases these aneurysms are large, with an average diameter of 6 to 7 cm, they are often asymptomatic and are found incidentally during imaging studies. A widening aneurysm may produce symptoms such as chest pain and/or dyspnea. Thromboembolic complications and aneurysm rupture are extremely rare events. A literature review by Calligaro2 identifed 19 aneurysms of the superior vena cava or mediastinal veins. Ten of these patients, with a mean follow-up of 14 years, did not undergo surgical repair and had no complications. Eight patients underwent surgery, including three for aneurysm rupture (with one fatal hemorrhage, one fatal pulmonary embolism).

While any of the abdominal veins may be affected, the most frequent sites are the portal vein and superior mesenteric vein. Portal vein aneurysms are usually symptomatic, and gastrointestinal bleeding is the presenting symptom.
These aneurysms can generally be diagnosed by color Doppler imaging, as well as by computed tomography (CT) or magnetic resonance imaging (MRI).
There is still some controversy as to the optimal management of these aneurysms. Nonetheless, surgical repair is recommended for patients with good surgical risk due to the potential for serious complications. Patients with portal or superior mesenteric venous aneurysms and hypertension linked to hepatic damage2 can be treated with a portocaval shunt when aneurysm resection is difficult. In asymptomatic patients without underlying hepatic lesions or portal hypertension, monitoring is the recommended course of action.

Venous aneurysms of the lower extremities

This is the location most frequently reported in the literature, and there is a wide variety of clinical presentations. The popliteal vein is by far the most common site, followed by the femoral vein and the great saphenous vein. There have been 125 published reports of surgically repaired popliteal vein aneurysms (PVA).3 The diagnosis is rarely clinical; instead, these aneurysms tend to be discovered incidentally during the workup for thromboembolic disease or on Doppler ultrasound imaging for chronic venous disease (Table I). Most of the published PVA involved the proximal popliteal vein; 75% were saccular and 25% fusiform.

Note: Some patients are listed several times either for symptom or sign.
Table I. Clinical characteristics of patients with surgically repaired popliteal venous aneurysm (n =125).

Seven published cases were bilateral. Thrombus was present in the PVA in two thirds of the patients, and although large or saccular aneurysms can potentially lead to pulmonary embolism (PE), there is no clearcut correlation between this complication and the size or type of aneurysm. Phlebography was the reference examination for these aneurysms, and had the highest diagnostic sensitivity for PVA (Figures 1 to 5). 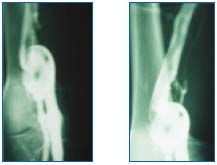 Doppler ultrasonography has since become the examination of choice for diagnosis of PVA because it can define aneurysm topography, shape, and diameter as well as the presence and size of any thrombus present therein (Figure 6). It is also useful for postoperative control and monitoring.

Figure 6. Ultrasonography. Popliteal venous aneurysm with thrombus in the lumen.

More recently, other techniques including CT (Figure 7) and MR angiography (Figures 8 a, b) have found a place as diagnostic tools. Nevertheless, phlebography remains useful to anatomically define the lesion prior to surgery in patients with a history of DVT or with venous anatomical variations of the popliteal fossa.
As far as therapeutic indications are concerned (Figure 9), surgery is indicated when PVA is diagnosed in a context of PE, regardless of aneurysm size, shape, or presence or absence of thrombus, because of the serious risk of recurrent PE. In fact, when PE is present, an absence of thrombus in the aneurysm at the time of diagnosis does not rule out its role in the PE, since the entire thrombus may have embolized.

Figure 8 a and b. Magnetic resonance imaging (MRI) study
of a popliteal venous aneurysm without thrombus. 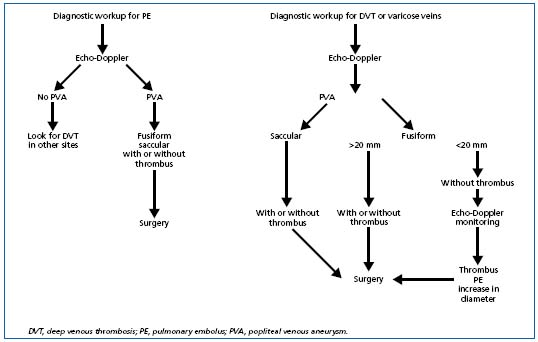 Figure 9. Treatment algorithm according to circumstances under which a popliteal venous aneurysm is diagnosed.

Anticoagulation alone is ineffective in patients with prior PE, and there is a high risk (80%) of recurrence.5,6 The management of asymptomatic aneurysms remains controversial. We believe that surgery (Figures 10 and 11) is indicated for patients with a saccular PVA, regardless of size, and for those with a fusiform aneurysm > 20 mm, without taking into account the presence or absence of thrombus, due to the unforeseeable risk of thromboembolic complications.

is indicated for patients with a saccular PVA, regardless of size, and for those with a fusiform aneurysm > 20 mm, without taking into account the presence or absence of thrombus, due to the unforeseeable risk of thromboembolic complications.
On the other hand, small fusiform aneurysms (< 20 mm) without thrombus pose a lower risk of thromboembolic complications and may simply be monitored by Doppler ultrasonography.7 Surgery is recommended if thrombus is found in the aneurysm, if the aneurysm enlarges or if the patient presents with thromboembolic episodes.
Different surgical procedures may be used for repair of PVA. While simple ligature and excision of the aneurysm without re-establishing continuity of the vein have been described, we recommend that venous continuity should be preserved whenever possible.
The type of surgical repair depends on aneurysm location and shape and on the presence of thrombus in the wall. The most common procedure is tangential excision with lateral suture as described by Aldridge.6 This procedure is particularly suited for repair of saccular aneurysms, which account for 75% to 80 % of all PVA.
Aneurysm resection with reestablishment of vein continuity is recommended when tangential excision of a fusiform aneurysm would be unsatisfactory.
There has been no perioperative mortality among the published surgical outcomes for PVA repair, even in patients who developed thrombus postoperatively. No aneurysm recurrence or PE has been identified after surgery. Long-term patency was approximately 75% for the different surgical procedures.6 Anticoagulation is prescribed for 3 to 6 months after surgery in most patients. It is known that such treatment does not protect nonoperated patients against the risk of PE.

Venous aneurysms are rare lesions that have been described throughout the venous system and are seen at any age. The lower extremities are the most frequently involved, with the popliteal vein being the main location. A wide variety of clinical presentations has been reported in the literature and they can be diagnosed as a subcutaneous mass, a widening mediastinal mass, an incidental finding on an imaging study, or during the workup for abdominal pain or chronic venous disease of the lower limb.
Although the natural history of these venous aneurysms is usually benign, depending on their location they have the potential for serious complications and may present initially as an episode of pulmonary embolism, thrombosis, or rupture with bleeding.
The management of venous aneurysms still remains controversial, and the indication for surgery should take into consideration the potential for thromboembolic or bleeding complications. Numerous types of surgical repair have been described, and the most common procedures are tangential excision with lateral suture or excision with interposition grafting. Technical choice is usually dictated by the type of aneurysm and by the anatomical location.